Welcome back TJR readers, did you spend all night Friday at your boss’ Christmas party and miss Smackdown? Maybe you drank a little too much of grandma’s eggnog and passed out before RAW. Well, have no fear as I have returned once again with The Top Ten Wrestling Stories of the Week to catch you up on what you missed.

Did you cry when WWE shut down their Tout account, preventing you from seeing short video clips from your favorite WWE Superstars? Great news because WWE has officially joined Tik Tok, so those sweet little videos will once again be headed your way. As for myself, who is old and stuck in my ways, I am still holding out hope that WWE restarts their MySpace account. (TJRWrestling)

9. Liv Morgan Promises a New Version of Herself in Vignette on RAW

Liv Morgan appeared in nothing but a towel while looking into a mirror in a vignette on RAW this week. Morgan reflected on who she has been and how she had let everyone around her decide on how she was going to behave and dress. Morgan then dropped the towel and got into a bathtub, stating that she has always been self-destructive and now needs to destroy who she was so the real her can emerge. Let’s hope that whatever new version of Morgan emerges, she doesn’t still have the nasty habit of losing in under five minutes on RAW. (TJRWrestling)

"I have to destroy myself so the real me can emerge." – @YaOnlyLivvOnce

The New Day is going to be smiling and throwing pancakes on WWE television for the foreseeable future, with them all agreeing to the same deal to extend their contracts for five more years. The New Day has been one of the most successful factions in wrestling history since debuting in 2014, winning the Tag Titles an impressive seven times including a record-breaking 483-day reign. Kofi Kingston became a Grand Slam Champion this year and is the current record holder with over 1,000 days as a Tag Team Champion. With the constant negativity that surrounds the wrestling business every day, it is reassuring that The Power of Positivity will continue in the WWE for another five years at least. (TJRWrestling)

After defeating Lana’s ex-husband Rusev in a tables match at TLC, Bobby Lashley decided to pop the question to Lana the next night on Raw. During an in-ring promo, Lana pulled out an engagement ring and asked Lashley to ask her to marry him, which Lashley quickly did. The happy couple took engagement pictures immediately following Raw and will be saying their vows very soon. Let’s all hope the happy couple stays together for many years or at least as long as this god awful storyline has lasted. (TJRWrestling) 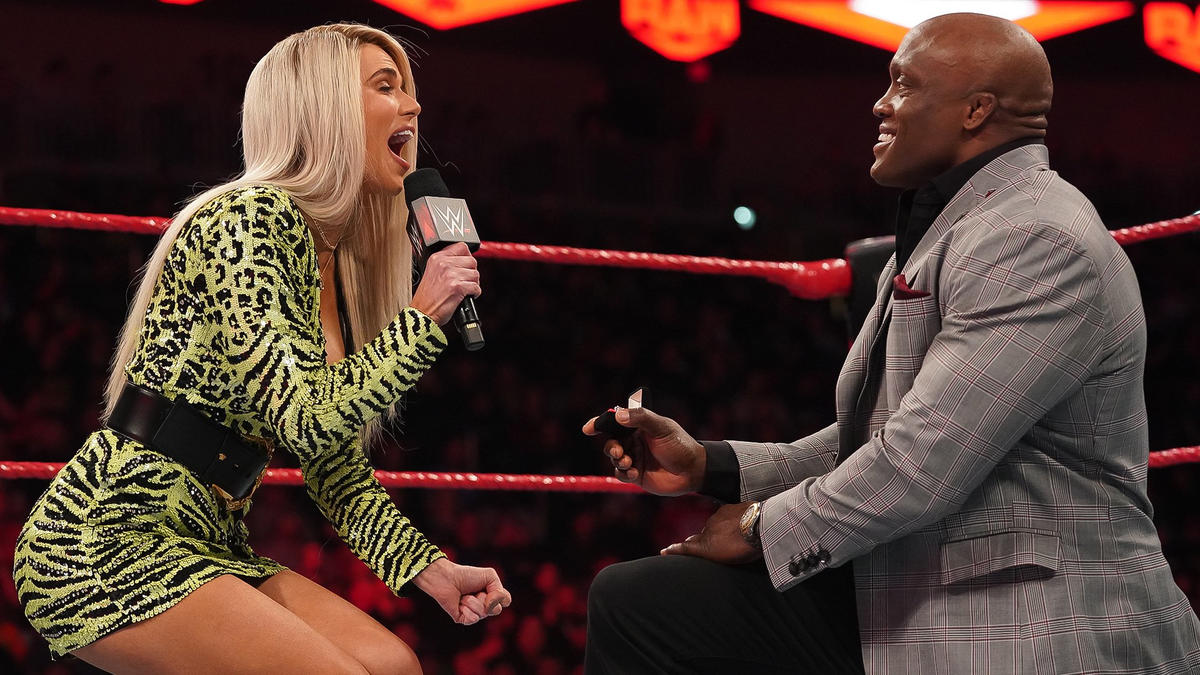 6. Kris Statlander Becomes the Number One Contender for the AEW Women’s Title

A space alien defeated a dentist last night on AEW Dynamite to become the number one contender for their women’s title. Kris Statlander who’s gimmick is that she is an alien species that communicates by touching people’s noses defeated real-life dentist Dr. Britt Baker to earn a title shot against Women’s Champion Riho. After the match, Brandi Rhodes attacked Statlander after Statlander refused to join her cult the Nightmare Collective, by waving her “talking finger” no to her. This whole segment proved that no matter what language you speak, or even what planet your from, stupid hokey crap is still stupid hokey crap. (TJRWrestling)

5. Both AEW and NXT go Commercial Free to Start Their Shows

After both NXT and AEW tied in the ratings last week, the Wednesday Night Wars continued to heat up this week. On Monday morning, NXT announced that their much anticipated NXT Heavyweight Title match between champion Adam Cole and Finn Balor would air completely commercial-free to start the show. Not to be outdone, a few hours later AEW also announced that their opening tag match between Kenny Omega and Adam Page vs. The Lucha Bros would also air commercial-free. Both these bouts were excellent with The Lucha Bros defeating Omega and Page when Page accidentally hit Omega with the Buckshot Lariat, and Cole defeating Balor when Johnny Gargano returned and distracted Balor costing him the match. Both companies starting their shows with such fast-paced, uninterrupted action hopefully led to them both attracting more viewers to watch the rest of their shows here on earth along with “planet nose-touchers” as well. (TJRWrestling)

4. Seth Rollins to Face Rey Mysterio for the United States Title Next Week on Raw

R-Truth, Akira Tozawa, Ricochet, Matt Hardy, Andrade and Humberto Carrillo competed in a nearly hour-long Gauntlet match to decide who will face Rey Mysterio for the US Title next week on RAW. The match ended in a no-contest however, when Andrade gave Carrillo a DDT on the concrete floor causing Carrillo to be stretchered out. Mysterio came out to check on Carrillo, but was interrupted by AOP and Seth Rollins who attacked him in the ring. Rollins then challenged and was granted a US Title match with Mysterio for next week’s RAW, making the hour-long match that just occurred completely meaningless. If only other “sports” worked this way, my Miami Dolphins may have actually had a chance of competing in the Super Bowl this year if they didn’t actually have to win anything to get there. (TJRWrestling)

Shayna Baszler’s impressive 465-day title reign as NXT Women’s Champion came to an end last night. Former NXT UK Women’s Champion Rhea Ripley defeated Baszler in what was an amazing match, to become the new champion. Baszler will now most likely move on to the main roster (Raw or Smackdown), possibly as soon as the Royal Rumble next month. As for Ripley, she will now have to defend her title against a number of talented women on the NXT roster, along with any space aliens who decide to beam down from “planet nose-touchers.” (TJRWrestling)

After Bray Wyatt easily defeated The Miz last Sunday at TLC, The Fiend suddenly appeared on the Titantron. Wyatt, on seeing the Fiend went under the ring and pulled out a giant mallet and prepared to attack the Miz with it. However, before Wyatt could attack, the lights started to blink in the arena, exciting Wyatt who believed The Fiend was in the building. Suddenly a hooded man entered the ring and hit a flying knee on Wyatt, before removing his hood to reveal a short-haired Daniel Bryan. This “new” look Daniel Bryan is practically identical to the American Dragon persona that Bryan portrayed ten years ago, with Bryan seemingly not aging a bit. Bryan looked so similar, that personally I believe that Bryan has fired up his Delorean to 88MPH and brought his old self into the future, shocking himself that he actually married a Bella Twin. (TJRWrestling)

1. WWE TLC Takes Place on Sunday as the Last WWE PPV of the Decade

WWE’s annual Tables, Ladders and Chairs PPV started out fast and furious before crashing and burning. The show started out with an excellent ladder match that saw The New Day defeat the Revival, followed by an outstanding match with Aleister Black defeating Buddy Murphy. Unfortunately, however, this was the peak of the show with the quality of matches deteriorating from there, ending with a disappointing main event TLC match between the Kabuki Warriors and Charlotte Flair and Becky Lynch. During the match, Kairi Sane of the Kabuki Warriors suffered an injury disrupting the match greatly, with her opponent Becky Lynch actually having to roll her under the ring to protect her. Unfortunately, nobody was able to roll the audience under the ring to protect them from having to watch the last half of this show. (TJRWrestling)

That will conclude another edition of The Top Ten Wrestling Stories of the Week. Like always, if you enjoy what I do please follow me on Twitter @BackseatBookers and listen to my podcast the BackseatBookers (please be forewarned, it is explicit as I swore twice on my Christmas Card this year.)