Welcome back TJR readers! Did you spend all week writing out your New Year’s Resolutions and miss Smackdown? Perhaps your annoying relatives still haven’t left, and you missed RAW. Have no fear, as for whatever the reason you missed something in the world of wrestling, I have returned with another edition of The Top Ten Wrestling Stories of the Week to catch you up.

After coming up short in his AEW Heavyweight Title Match against Chris Jericho, Cody Rhodes has hired one of his father’s biggest adversaries as his advisor and coach for 2020. WWE Hall of Famer and founding member of the Four Horseman, Arn Anderson, was in the Rhodes’ corner last night on AEW: Dynamite and helped him defeat Darby Allin. The victory came when Anderson gave Rhodes the brilliant advice to put his knees up when Allen went for the Coffin Drop. Anderson and the Horsemen had a memorable feud with Cody’s father, Dusty Rhodes, including breaking his arm in a parking lot. For Cody’s sake let’s hope all the “Hard Times” he has had so far in AEW are now going to be behind him. (TJRWrestling)

The American Nightmare @CodyRhodes is back and ready with new manager #TheEnforcer Arn Anderson #AEWDynamitepic.twitter.com/QiSePkmbxZ

9. The Undisputed Era to Face Imperium at WWE Worlds Collide

The top faction of NXT is set to face off with the top faction of NXT UK the night before the Royal Rumble at WWE Worlds Collide. Representing NXT will be The Undisputed Era lead by NXT World Champion Adam Cole along with NXT Tag Champions Bobby Fish and Kyle O’Riley and NXT United States Champion Roderick Strong. On the other side representing NXT UK will be Imperium lead by NXT UK World Champion Walter along with Alexander Wolfe, Fabian Aichner and Marcel Barthel. USA and Great Britain have had a storied rivalry going all the way back to the Revolutionary War, let’s hope that when the bell rings for this one that nobody cracks it. (TJRWrestling)

8. Andrade and Charlotte Flair Get Engaged to be Married

The New Year started out on a high note for Charlotte Flair and Andrade as the two announced their engagement to be married when Andrade proposed to her. The couple has been together since early last year and made the announcement on social media on New Year’s Eve. This will be Charlotte’s third marriage, putting her two behind her legendary father Ric Flair. Let’s hope for the sake of the happy couple that is one milestone of Ric’s that Charlotte doesn’t reach.

MJF announced in an in-ring promo this week on AEW Dynamite exactly what Cody Rhodes will have to do if he wants a match with him at AEW: Revolution. For Rhodes to get the match against his former friend he will have to agree to not touch MJF before the match, win a cage match against Wardlow and get on his hands and knees and allow MJF to whip him ten times. It is unclear at this time if Rhodes newly taught skill to put his knees up will help him with any of these tasks. (TJRWrestling)

The WWE NXT brand announced last night which teams will compete in the 2020 Dusty Rhodes Tag Team Classic Tournament. The theme of NXT versus NXT UK will continue in this tournament with four teams from each brand competing, including NXT Tag champions The Undisputed Era facing NXT UK Tag Champions Gallus. It is yet to be seen if these contracts will all be signed so large that NXT General Manager William Regal can read them without putting on his spectacles. (WWE) 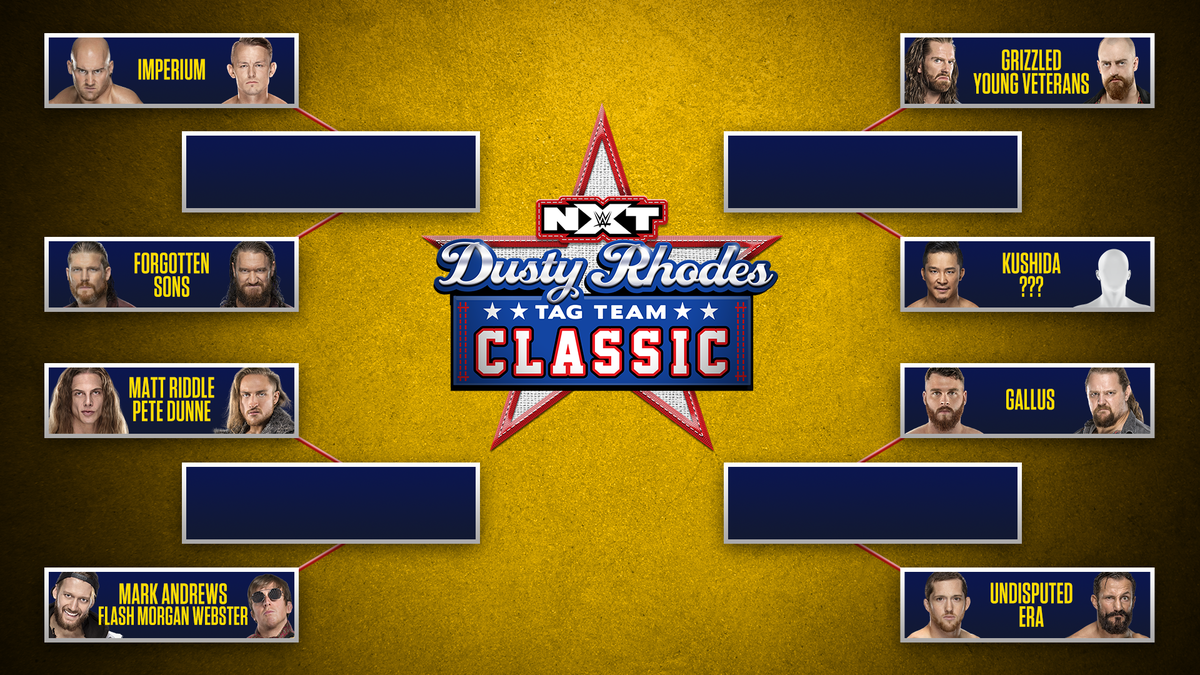 5. Daniel Bryan to Face “The Fiend” Bray Wyatt for the Universal Championship at the Royal Rumble

After several starts and stops of the match throughout the night, Daniel Bryan eventually defeated King Corbin and The Miz in a triple threat match to earn a Universal title shot against “The Fiend” Bray Wyatt at the Royal Rumble. Bryan will now have the opportunity to avenge his Survivor Series loss against Wyatt as well as get revenge for Wyatt pulling his hair out a month ago on Smackdown. It is still unclear when the WWE Universe is going to get their opportunity for revenge on Wyatt, for blinding them with his stupid red light. (TJRWrestling)

4. Becky Lynch to Defend the Raw Women’s Title Against Asuka at the Royal Rumble

Daniel Bryan won’t be the only one looking to avenge a loss at this year’s Royal Rumble, as Becky Lynch will look to get payback from her loss at last year’s Rumble to Asuka. Lynch will defend her Raw Women’s Title against Asuka whom she has never beaten, after Lynch asked for and was granted the match. Asuka is currently one half of the Women’s Tag Team Champions with her partner Kairi Sane giving her the opportunity to leave the Rumble as a double champion. As for Lynch, she is coming off an amazing 2019 where she won the Royal Rumble, went on to win both Women’s titles at Wrestlemania and perhaps most impressively won the 2019 Johnny Award for Female Competitor of the Year! (TJRWrestling)

For years WWE has advertised that anything can happen when you attend a WWE live event. This statement was proven to be true this past Thursday at a house show in Madison Square Garden. Andrade defeated US Champion Rey Mysterio to claim his first main roster championship at the event. WWE claimed that Andrade earned the title opportunity by winning a Gauntlet match on RAW, even though that match originally had no winner after Andrade hit Humberto Carrillo with a DDT onthe cement. Rey Mysterio will get his rematch next week on RAW, however, one would think that by these standards both Seth Rollins and Bray Wyatt are in line for a title shot after their memorable Hell in a Cell match this past October. (TJRWrestling)

2. Wrestle Kingdom 14 to take place this Saturday and Sunday

New Japan Pro Wrestling’s biggest event of the year is about to take place over two days starting on January 4th. This incredible two-day event has a jam-packed card including a Texas death match for the IWGP US Title between Jon Moxley and champion Lance Archer, Justin Thunder Liger’s last match and a unification bout between the IWGP Intercontinental Champion and the IWGP Heavyweight Champion. Also featured on this card is current AEW Heavyweight Champion Chris Jericho vs. Japanese Legend Hiroshi Tanahashi, with the stipulation that if Tanahashi wins he will get an AEW title shot. No matter what happens this weekend on this amazing wrestling card, it will surely be a great opportunity for every wrestling fan to just sit back and enjoy with a little bit of the bubbly. (TJRWrestling)

WWE weddings have a long history of rarely going smoothly with Lana and Bobby Lashley’s nuptials being no different this past Monday on RAW, as it was marred by several interruptions. First, an unknown male and female objected during the ceremony both claiming that they were the ex-spouses of Lana and Lashley who were still in love with their former partners. After those two were quickly disposed of, it was Liv Morgan’s turn to make her return to RAW and object to the nuptials. A seemingly heartbroken Morgan confessed that Lana was the love of her life, not believing that Lana could go and marry Lashley. Lana proceeded to attack Morgan, causing several referees and producers to have to break them up. All of this still did not deter Lana however, who still wanted the ceremony to continue. This was until her ex-husband Rusev popped out of the cake and attacked Lashley while Morgan threw Lana face-first into the cake, ending the festivities without a marriage. Despite all of this, the fact that no one was Roofied, attacked by a snake or died from too much sex on the honeymoon makes this one of the more successful WWE weddings. (TJRWrestling)

That will wrap up another edition of The Top Ten Wrestling Stories of The Week. Like always, if you like what I do, or Revolutionary War references, please follow me on Twitter @BackseatBookers and listen to my podcast the BackseatBookers (please be aware that it is explicit as 2020 isn’t just the year, but also how many times I swear a day.)