Welcome back TJR readers, did you spend all day Friday getting your prop bets in, and missed WWE Smackdown? Perhaps you were too busy celebrating the Rams winning the Super Bowl, and missed Raw.

(PLEASE NOTE: This was written before WWE announced The Undertaker for the WWE Hall of Fame this year, which we covered on the site here. Basically this is from last Friday to Thursday. We’ll have the Taker in next week’s edition of this column.)

It has not taken long for Jay White to have his first match for AEW. Just a little over a week since the former IWGP heavyweight champion made his shocking debut on Dynamite, he is scheduled to compete in the ring. White will face Trent Beretta on tonight’s episode of Rampage. With White competing on television so quickly he is obviously being fast-tracked, and should be competing on Dark in no time.

This past Tuesday on NXT Vengeance Day, the finals of the Dusty Rhodes Tag Team Classic were held. The finals saw The Creed Brothers (Julius & Brutus) successfully defeat MSK to win the tournament, and therefore earn an NXT tag title shot against Imperium. It is unknown if the Creed Brothers win the titles, or if they will have to defend them against Rocky Balboa on New Years Day. (TJRWrestling)

Wrestlers under 205 pounds will no longer have a show exclusively for them. This week it was reported that WWE has ended 205 Live, and is replacing it with a new show called NXT: LVL Up. WWE taped the first episode of NXT: LVL Up before NXT Vengeance Day this past Tuesday, with the show planning to air in 205 Live’s timeslot. The first episode of 205 Live aired way back in 2016, with a total of 267 episodes airing in total. The show was originally created to feature superstars under 205 pounds, but recently 205 has been more associated with the show’s total number of viewers.

This Friday night, we're taking it to the next level ⬆️

NXT Level Up comes your way right after #SmackDown, streaming at 10/9c exclusively on @peacockTV in the U.S. and @WWENetwork everywhere else! pic.twitter.com/ZK5GypgZcO

Alexa Bliss will make her anticipated return to the ring this Saturday in Saudi Arabia at WWE Elimination Chamber. This week on Raw, it was revealed that Bliss will join Bianca Belair, Rhea Ripley, Nikki A.S.H., Doudrop and Liv Morgan as the final member inside the Women’s Elimination Chamber. For the last several weeks, Bliss has been shown in a series of vignettes with her therapist. This past Monday another vignette aired, with the therapist determining that Bliss is finally cured. The therapist then gave Bliss a new replica Lilly doll, stuffed with the pieces of her former Lilly doll. This of course is pretty symbolic, as Bliss is also a replica of Bray Wyatt stuffed with pieces of Wyatt’s gimmick. (TJRWrestling)

6. CM Punk to Face MJF in a Dog Collar Match

Somewhere Rowdy Roddy Piper is looking down and smiling. This week’s Dynamite opened up with CM Punk sitting center of the ring. Punk then reminded MJF that because Punk and Jon Moxley defeated FTR the previous week on Dynamite, he now gets to pick the stipulations for their rematch, and when it will happen. Punk then stated he has chosen to have his rematch with MJF at AEW Revolution on March 6th, and that it will be a dog collar match. This will be only the second dog collar match in AEW history, with the first being between Cody Rhodes and Brodie Lee. Getting chained to someone you cannot stand will unquestionably lead to incredible levels of blood and violence. If you don’t want to take my word for it, just ask anyone who has ever been divorced. (TJRWrestling)

Finally… The Rock may be returning to the WWE. This past Sunday, The Rock gave an opening on the field promo before the start of Super Bowl LVI. After the promo, Jamie Iovine noted on Twitter that The Rock did not pause for fans at SoFi Stadium to finish his signature “And Millions…” line. The Rock responded to Iovine, letting him know that was an Easter egg and that the “Millions with a pause is coming soon….” Adding more fuel to the rumors of The Rock returning, was the reports this week that WWE is planning another “Stone-Cold level” surprise for WrestleMania 38. It is unknown at this time of The Rock will make a surprise appearance at WrestleMania this year. What is known, however, is that if you want to see The Rock’s Super Bowl promo you can head over to LA Rams superfan John Canton’s house, as he has had the game playing on repeat all week. (Note from John: It’s true. It’s damn true!)

brother that was a little “Easter egg” for you and the MILLIONS… 🤣🎤
Don’t worry…the MILLIONS with a *pause is coming soon…. 😉👊🏾

WWE fans will not have to wait until WrestleMania 38 to see Ronda Rousey compete in a match. This past Friday’s Smackdown opened with WWE Official Sonya Deville entering the ring. Deville stated that she had petitioned upper management to fine Ronda Rousey $100,000 dollars for attacking her the previous week. Fellow WWE official, Adam Pearce, then came into the arena, and informed Deville that he had an email from Vince McMahon responding to her petition. Pearce then told Deville her petition was denied, and that Deville’s abuse of power against Naomi must stop immediately.

In the main event of the evening, Naomi challenged Charlotte Flair for the Smackdown Women’s Championship. After Charlotte defeated Naomi in a great match, Deville got in the ring and berated Naomi. Naomi then proceed to attack Deville, until Flair joined in to help Deville. This led to Rousey coming in to save Naomi to end the show. Later on Twitter, WWE announced that Rousey and Naomi would face Flair and Deville in a tag team match at WWE Elimination Chamber in Saudi Arabia on February 19th. This is actually the third women’s match announced for the show so far. This is quite incredible, as just a few years ago women were not allowed to compete in Saudi Arabia at all. Also incredible is not a single one of the women is over the age of 50. (TJRWrestling)

This past August, AEW had one of the biggest crowd pops ever when CM Punk returned to wrestling in his hometown of Chicago, Illinois. The crowd at WrestleMania 38 from Dallas, Texas this April, may now have a reason to be even louder than Punk’s pop. This week it was reported that WWE is in talks with Stone Cold Steve Austin to wrestle at WrestleMania 38. The plans are for Austin to reportedly wrestle Kevin Owens at the event, with Owens actually ripping on Texas (Austin’s home state while WrestleMania is in Dallas) this past Monday on Raw. Austin has not wrestled a match since 2003 when he wrestled The Rock at WrestleMania 19. It is unknown why the 57-year-old Austin would decide to now return to the ring after almost 20 years, but I am pretty sure if he does, catering will be getting even less crowded. (TJRWrestling)

WWE is scheduled to return to Saudi Arabia for its Elimination Chamber event this Saturday at 12 PM ET. Eight matches have been announced including The Miz facing off against Rey Mysterio. Drew McIntyre and Madcap Moss will compete in a Falls Count Anywhere Match. Ronda Rousey and Naomi will face Charlotte Flair and Sonya Deville in a tag team match. The Usos will defend the Smackdown Tag Team Championships against The Viking Raiders. Bianca Belair, Doudrop, Rhea Ripley, Nikki A.S.H, Liv Morgan and Alexa Bliss will all compete inside of the Elimination Chamber for the chance to challenge for the Raw Women’s Championship at WrestleMania 38. Lita will come out of retirement to challenge Becky Lynch for the Raw Women’s Title. Goldberg will attempt to once again win the Universal Championship in Saudi Arabia, when he challenges Roman Reigns. Finally, Bobby Lashley will defend the WWE World Championship inside the Elimination Chamber against Brock Lesnar, Seth “Freakin” Rollins, Austin Theory, Riddle and AJ Styles. Personally, I am excited for this show, as with a noon start time it should be over before this old man goes to bed. (TJRWrestling) 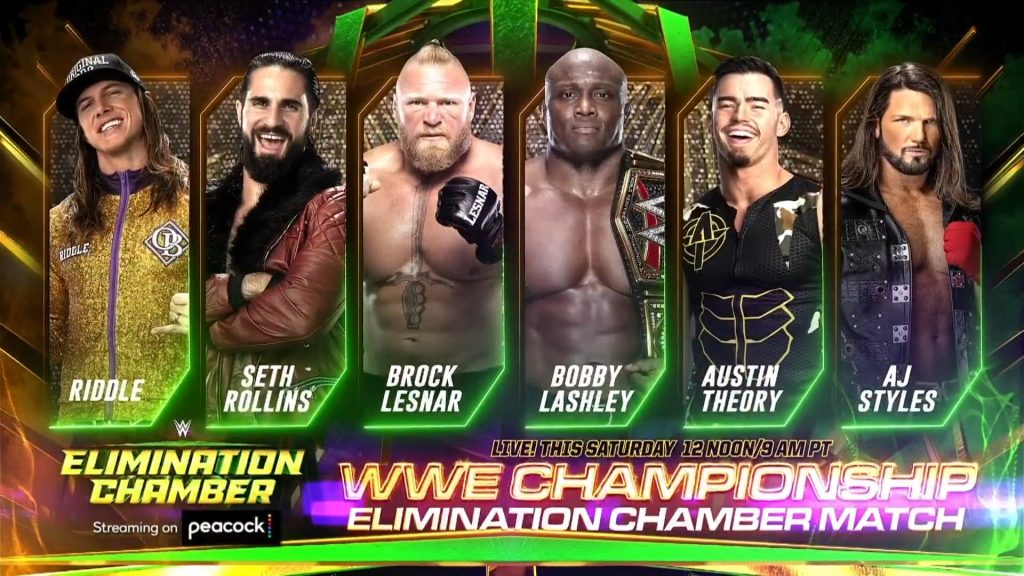 One of AEW’s founding members has left the company. This week both Cody and Brandi Rhodes announced on Twitter that they had decided to not renew their contracts with AEW. AEW owner Tony Khan also Tweeted out a message, thanking both Cody and Brandi for everything they did for AEW. Cody had been an Executive Vice President for AEW, with his wife Brandi also serving as the Chief Brand Officer. Making this story even more incredible is reports that Cody is likely returning to the WWE, and could be competing at WrestleMania 38 in April. It is unknown how Vince McMahon could have possibly convinced Cody to return to the WWE, but he must have sprinkled a lot of magical Stardust to make it happen. (TJRWrestling)

That will conclude another edition of The Top Ten Wrestling Stories of the Week. Thank you for taking the time to read this each week. Although I often joke, I have recently started refereeing with NYCW and respect more than ever what wrestlers do every week. I wrote an article all about it all right here. If you like what I do, despite my jokes being almost bad as a missed face mask call almost costing a team the Super Bowl, then follow me on Twitter @Fowlerwrestlin1.