Many fans have called this one of the best matches in NXT history. it featured two of the best smaller wrestlers in the company hoping to make a name for themselves. And make a name for themselves they did. Not only has this match’s reputation withstood a lot of the craziness that came after it. It has also become something of a bar – a measuring stick, if you will – for all big NXT matches. This is the match that really set new expectations for NXT TakeOvers, and helped transform NXT from a ‘developmental’ brand into its own standalone entity worthy of being on the same level as SmackDown and RAW.

Today we look back at the NXT Championship match between Adrian Neville and Sami Zayn from NXT TakeOver: R Evolution.

The main story here is that Zayn simply couldn’t ever win the big one. Each time he’d be within reach of winning a big match, he’d choke. That caused him to lose a few high-profile matches, including a title match against Neville. As time wore on, Zayn – who saw himself as the heart and soul of NXT – became frustrated with his own shortcomings. This led to a major confrontation with Neville. Zayn challenged Neville for one last shot at the NXT Championship, and vowed that if he lost, he’d leave NXT. 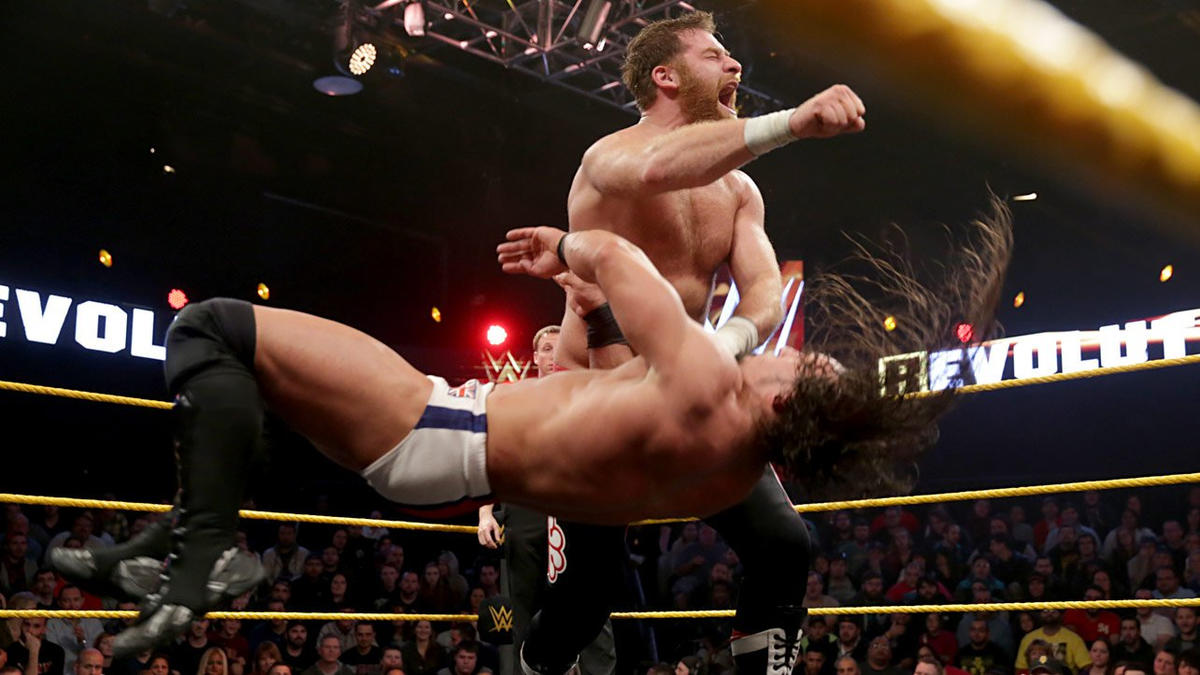 This match originally took place on December 11th, 2014 at NXT TakeOver: R Evolution. It was originally rated ****3/4 out of five by the Wrestling Observer’s Dave Meltzer, and TJR’s John Canton rated it ****1/2 out of five and named it one of his top five WWE matches in 2014. Let’s look back now and see how well this match holds up.

This is for Neville’s NXT Championship. Nothing happens for the first minute as Zayn soaks in the adoration from the crowd. A solid chain-grappling sequence leads to a stalemate. Zayn goes for an armlock but Neville wrestles out and into one of his own. Neville continues to work the arm and lands counter after counter on Zayn’s escape attempts. Zayn manages to wriggle his way into a counter but Neville flips out to safety. They lock up again and Neville works the arm some more until Zayn gets to his feet. Neville flips over a charging Zayn and dodges a second corner charge. Neville shoulder checks Zayn in the gut, flips over him and charges, but walks into a big tilt-a-whirl backbreaker. Neville rolls out of the ring but Zayn chases after him and lands a springboard Asai moonsault to the floor. Great start to the match.

Zayn gets a one-count off a jump kick and another off a crucifix pin. Neville lands a sudden back elbow and gets a two-count, followed by another two-count off a dropkick to the back of Zayn’s head. he applies a chinlock and uppercuts Zayn on an escape attempt for another two-count, and then lands a trio of kneedrops for another two-count. Zayn tries to fight out but eats a second-rope dropkick for his efforts. Neville pins but Zayn kicks out. Neville starts mocking Zayn with Kawada kicks and charges for a big boot, but Zayn counters with a huge clothesline and both men go down. Zayn follows with another clothesline and a dropkick that sends Neville out of the ring. Zayn charges for a dive but Neville comes back in and lands a running hurricanrana. Now Neville charges but Zayn cuts him off and sends him over the rope and out of the ring. Suicide dive by Zayn.

Zayn tosses Neville into the ring and lands a top-rope crossbody for two. He goes for a suplex but Neville lands behind him and goes for a German. They counter each other until Neville finds himself on Zayn’s shoulders in the electric chair position. Zayn somehow transitions this into a gorgeous Blue Thunder Bomb. Sick move. 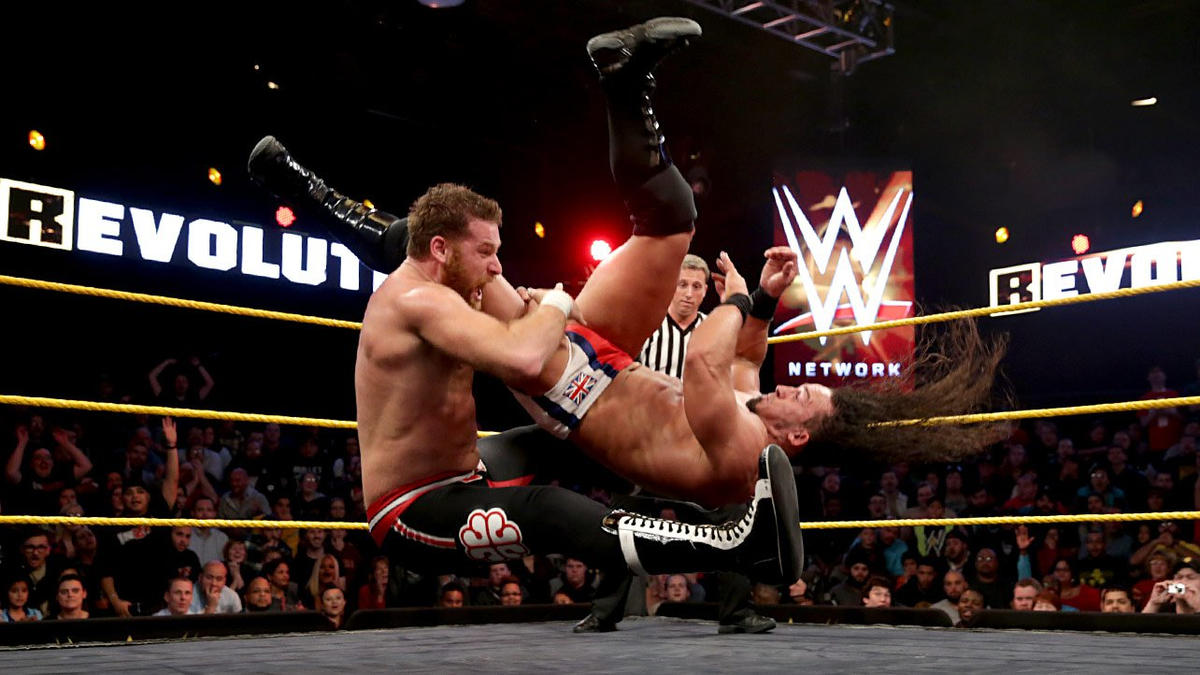 Zayn pins. Neville kicks out and lands a jawbreaker. He follows with a running uppercut to Zayn in the corner and charges, but Zayn follows right behind him. Yet Neville has the wherewithal to boot Zayn as he charges, sending Zayn down. Bridging German suplex. Zayn kicks out. Neville goes for a powerbomb but Zayn fights out and counters with an arm drag. Wait, no, Neville counters with a Ligerbomb. One, two, no, Zayn survives.

Neville starts hitting forearms, but Zayn pushes forward and demands more. Forearm exchange. Neville ends it with a kick combination. Zayn dodges a running kick and lands a clothesline. He charges for the Helluva Kick. Neville dodges and lands a huge spinkick and then climbs to the top rope. Red Arrow…no, Zayn gets his knees up and locks in a Koji Clutch. 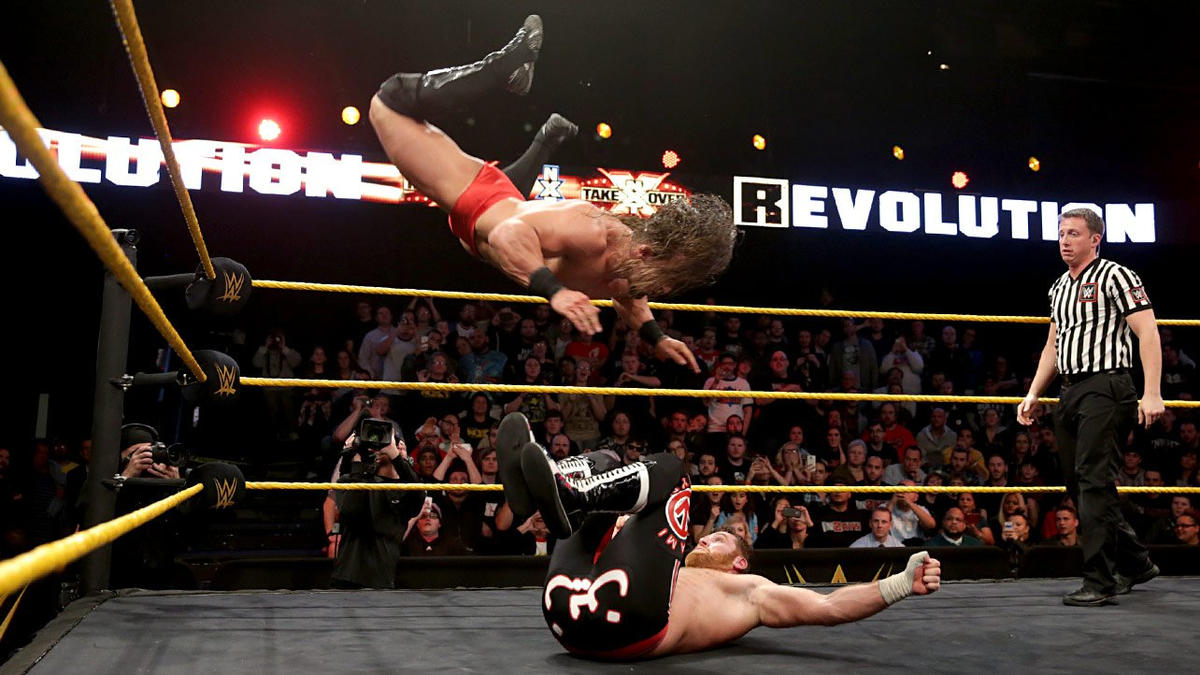 Neville reaches the ropes with his feet. Zayn goes for the Exploder into the corner. Neville counters with a roll-up. Zayn kicks out and the momentum pushes Neville into the referee. Zayn gets distracted momentarily, allowing Neville to hit a superkick and a poisoned Frankensteiner. Zayn gets spiked on his head. One, two, thr—no, Zayn kicks out at the last possible moment.

Both men stagger around the ring and trade forearms. Zayn lands two German suplexes followed by a half-and-half suplex that drops Neville on his head. He charges for the kick but Neville escapes the ring. Bad idea. Zayn charges and dives through the ropes and hits a DDT. Amazing move. Zayn tosses Neville into the ring. Helluva Kick connects. But the ref gets hurt as well. He checks on the ref again as Neville grabs the title belt. But Zayn catches him and boots him before he can hit Zayn with it. Both Neville and the ref are down. Zayn grabs the belt as the fans beg him not to. Zayn has a moment of moral conflict as he teases hitting Neville with the belt. Ultimately he decides against it and drops the belt. But Neville takes advantage with a roll-up. One, two, Zayn kicks out and lands the corner Exploder suplex. Helluva Kick connects again. One, two, three! Zayn wins the match and the title!

I must admit that I was a bit disappointed with this match. Even though it went on to become the standard-bearer and template for all big NXT matches, I never got the impression that I was watching a world-beating instant classic. It was a great match but not an amazing one, and here’s why.

Firstly, something felt off about Neville’s work here. He tried to be a blatant villain but it never really clicked. Sure, the crowd booed the hell out of him, but that wasn’t because his villainous efforts were working. It was because the fans were so enamored with Zayn that anyone in Neville’s position would be booed by default. And his attempt at villainy was weakened by his flippy moves and his dives. I remember playing SmackDown vs. Raw 2006 and in that game there was a distinct set of rules for when a wrestler plays the hero or the villain. Heroes do dives and crazy acrobatics while villains do not. That makes sense because, who is going to boo a crazy dive? No one. It just seemed completely out of place for Neville as he struggled to decide how he wanted to tell his story.

Secondly, a lot of stuff in the match seemed to exist for no reason. Neville spent the opening minutes working Zayn’s arm quite methodically, but it didn’t lead to anything at all. No payoff, no drama, no weakness from Zayn, nothing. It was just something done to pad the opening minutes until the big move spam could begin. And then there was the ref bumps. It’s one of the most annoying tropes in wrestling that just won’t go away. They tried to make this one stand out by making the ref hit his head, but it still came across as forced and overplayed, especially since they did it twice in one match. I understand it’s used for dramatic effect, but I think they could’ve gone in a different direction in this match. If Zayn and Neville were such intense rivals, couldn’t they have had a more extensive brawl or a more heated finisher exchange to underscore how well they knew each other and how personal the feud had become? I think that would’ve been better. What happened instead was that Zayn had this long ‘moral question’ segment that seemed to drag on and on. He milked the crowd as much as he could but I think it went too long and the payoff came off as weak.

While this match did have those obvious flaws, it was still pretty solid. Zayn’s struggle as an underdog was on full display here and the two wrestlers told that story masterfully. Zayn had the crowd behind him and never lost them, not even for a second. They were fully invested in his struggle and their reactions made this match and its big moments feel special. Neville and Zayn created an interesting contrast between Neville trying to win by any means necessary and Zayn trying to win the right way. It paid off in the end with a great crescendo of a finish and a truly satisfying conclusion. 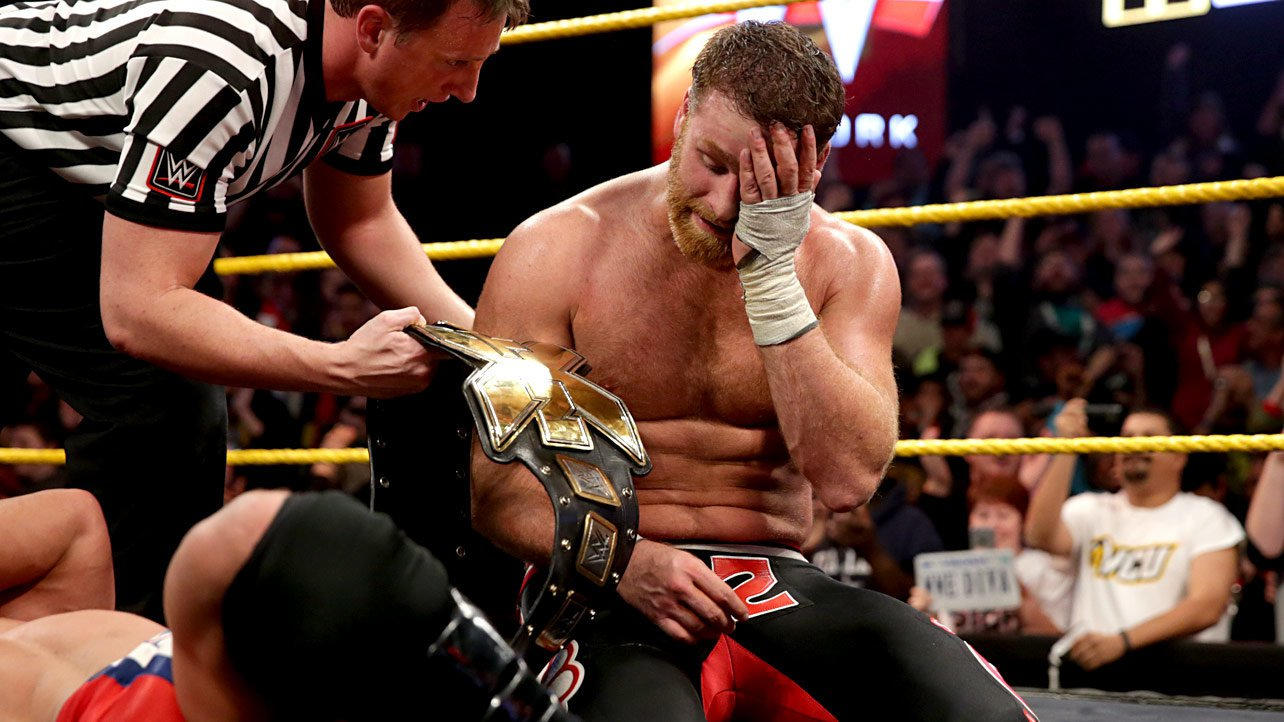 Given the two wrestlers involved, I finished the match expecting more. While their story was well-told and the match served its purpose, I didn’t see the historic, MOTY-level contest so many others did. It was great as far as WWE matches of its time, and is still one of the better NXT big matches because it never went into overkill territory. It had the right balance of story, selling, big moves, excitement and tension. But I think it simply could’ve been better.

I think this match is worth revisiting if you want to see a great conclusion to a great story. The action itself is great but not amazing, while the narrative of the match delivers by going down a tried-and-tested path. Luckily, the video link I included above also includes the terrific post-match celebration and the beginning of Zayn’s great feud with Kevin Owens. So really, you definitely get a lot out of this match, even if, in my opinion, it isn’t anything historically epic.