SmackDown has been live for two months now. While there have been a few ups and downs along the way, there is quite a bit to be happy about on SmackDown Live these days. The brand is coming off of Backlash, an incredibly successful first SmackDown-specific PPV. They’ve crowned their first Women’s Champion in Becky Lynch, their first Tag Team Champions in Rhyno and newly signed Heath Slater. Speaking of Slater, is there a bigger success story since the brand split? He went from total afterthought to one of the more beloved performers on either show. In perhaps SmackDown’s crowning moment, they also saw the Phenomenal AJ Styles become the new WWE World Champion.

AJ Styles has not only lived up to his moniker over his eight months in the company but he’s actually exceeded the impossibly high expectations. In less than a year he’s stolen the show at the Royal Rumble, helped bring Chris Jericho’s career to new heights, elevated Roman Reigns in a series of matches in the spring, got the better end of a feud with John Cena by winning clean at SummerSlam all leading to his first WWE World Championship. Known mostly for his wrestling prowess, which he displays every night, he has been surprisingly good as a character since his heel turn a few months ago. For Styles, eight months in WWE has been better than most careers in the industry. But all this doesn’t come without one little concern.

Last night on SmackDown, Styles was introduced as the WWE World Champion for the first time. He cut a good promo telling us all that he does what he says he’s going to do, that if he tells us the sky is green we shouldn’t even bother to look outside, because it will be. It managed to be funny while also proving a point for a character we are supposed to take seriously. Then came a returning John Cena, absent since his loss at SummerSlam. Styles more than held his own in the ring with Cena as he has since the feud started in May. Doesn’t sound like any reason for concern but I managed to find one.

John Cena’s presence looms large over WWE. It has for a long time and it does for good reason. I think that talk of him “burying” talent is slightly overblown. I’d like to see WWE use him to build new stars more often, but he has more than earned his place and he continues to earn it with consistently great performances. That being said, the time is most definitely not now, pun intended. I’ve heard fans in various places talking about the expectation that Styles will have an extended run as Champion. I felt the same way but I’m not feeling so certain anymore.

First things first, a significant part of the build to their SummerSlam match was the idea that when Styles did win, Cena would have to admit that Styles was better than him. One of the most memorable lines spoken between the two opponents was Styles telling Cena that if he did admit that he was better he would be a loser. If he didn’t, then he would be a liar. Either way, AJ wins. Cena wasn’t there the next night to admit that AJ was better or to deny it. He returned last night and still never had to accept it. All he said was that he has finally decided to “take back” the WWE World Championship. He even made mention of the fact that he is one title reign away from tying Ric Flair’s 16. He also tweeted this:

I may be reading too much into it but it just feels like the type of thing WWE would be hyping up because it’s going to happen. Cena has already been booked at No Mercy in a Championship match. It is a Triple Threat with Dean Ambrose which means Cena winning could be justified since Styles wouldn’t actually have to take the pin. I am not guaranteeing or even predicting that AJ will drop the belt already, but I am a bit concerned about it. I wish my concerns on SmackDown started and ended there but there is one more and it’s the bigger of the two concerns. 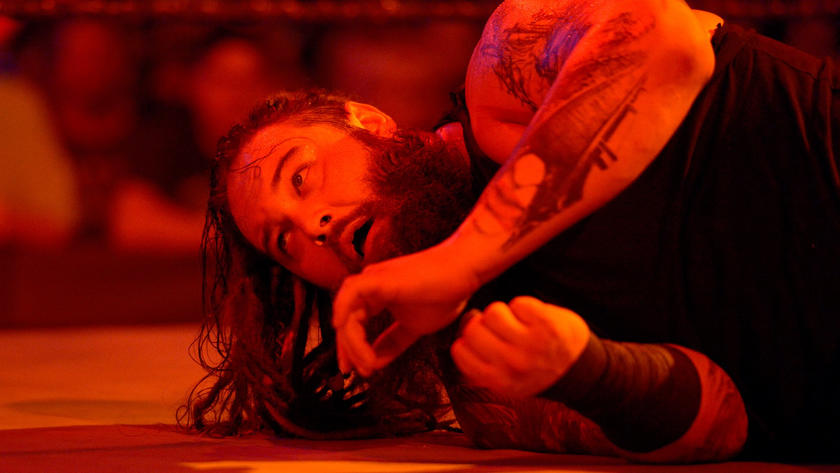 How long did we hear fellow WWE fans discuss the idea of a brand split before it was actually announced? One of the main selling points was the idea that Bray Wyatt could be the dominant heel on SmackDown. It was a pipe dream to me but one I hoped would come true. I’m aware Bray is pretty polarizing, but I think he’s one of the most charismatic performers in the company and polarizing seems to be what WWE loves most.

Isn’t Cena hyped as the most polarizing Superstar the company has always seen? Haven’t they billed Roman Reigns as the guy that may get booed, he may get cheered but he gets a reaction? It seems like Wyatt has a similar ability to connect with the crowd while also being one of the company’s most unique characters. For whatever reason WWE just doesn’t seem to have the ability or the interest in getting the most out of him.

The brand split saw the Wyatt Family broken up, which some believed would be good for him as it would allow him to shine on his own. He could have been the perfect first opponent for Dean Ambrose after bringing the WWE World Championship to SmackDown. There was a built in rivalry and history for Bray and Dean and a good track record between the two of them, but that role was given to Dolph Ziggler. That resulted in a less than spectacular match at SummerSlam while Bray wasn’t even on the show.

Over the next two weeks they built to a match at Backlash with Randy Orton. Orton was just coming off of one of the most devastating beatings in WWE history at the hands of Brock Lesnar. A beating that actually left Randy with a real life concussion which kept him out of the match at Backlash. Sort of. They staged a Bray Wyatt ambush pre-show that would leave Orton unable to compete. That left Bray with a count-out victory only to be put in a No Holds Barred Match with Kane. Lo and behold, after a surprisingly decent match Randy Orton showed up as expected to hit Bray with an RKO. So not only did Wyatt so to Orton, he lost to Kane as well.

A case can be made that Orton intervened in the match because it’s a way to build on their feud for the future. My view is, wasn’t Bray putting him out of action enough to keep him in Randy’s sights? What makes this even more egregious is Randy Orton was used at SummerSlam as a way to make Brock Lesnar look even stronger. How much stronger can Lesnar look than he already has? He’s been booked for two years as the most dominant force in WWE, maybe ever. It doesn’t make much sense to me that was built that way just in time to be off TV for the foreseeable future. There is no real payoff to that decision and Bray Wyatt is turning out to be collateral damage.

There was a scenario where Orton could have found a way to defeat Lesnar, building him up for the upstart SmackDown brand. In turn Bray Wyatt could have gone over Orton to be built as the monster he claims to be. A loss to Orton wouldn’t make anyone feel any differently for Brock and a loss to Wyatt wouldn’t overshadow Orton being the one to slay the Beast Incarnate. Even if he would have still lost to Randy, it would be while he was still in the glow of a massive SummerSlam victory.

It is getting to the point where what makes Bray Wyatt most interesting is muddied by a mounting pile of losses. The brand split was supposed to be the best thing that could happen for Wyatt, but it has turned into more of the same. I’m losing faith in the idea that the company will ever realize what they have in him or the idea that he will realize his full potential. All I can do is hope WWE finds a way to turn the fortunes of Bray Wyatt around before the fireflies go dim forever.

Ron is a 36-year old sometimes freelance sportswriter from Philadelphia. He has a passion for professional wrestling over any other form of entertainment. He hopes to bring interesting and thought provoking topics to TJR Wrestling on a weekly basis. He loves to interact, learn from his readers and welcomes feedback. Ron is currently hosting the Mat Madness Wrestling Podcast, found on YouTube and iTunes. He can be contacted via Twitter @RonPasceri or at [email protected]