What I’m reviewing here is a Youtube video that WWE posted counting down Rey Mysterio’s 20 greatest moments. I’ll provide context for those moments and share my thoughts as we go through the countdown. Remember, this is WWE’s list, not my list.

I’m a big fan of Rey Mysterio going back to when I first watched him in WCW in 1996 when he was just 22 years old. I can remember those days well where every time my friends and I watched a WCW PPV or Nitro, we always looked forward to Rey’s match the most. The guy was doing things in the air that I had never seen before. He influenced the next generation so much and we see that influence all the time now. Rey also spent his entire WWE career as a babfyace, which is rare. He did have a heel run in WCW (he also unmasked in WCW while keeping the mask on in WWE), but this is all about his WWE run. He started in WWE in July 2002, so that’s why WWE put together this video of his 20 greatest moments.

Rey’s first televised match was against Chavo Guerrero on Smackdown. He got the win with the 619 kick followed by the springboard hurricanrana that was called the West Coast Pop. The fans loved it. This aired on the July 25, 2002 episode of Smackdown.

Rey won a lot of titles in his WWE career including the Tag Team Titles. Rey teamed up with the big man Batista to form something of a babyface dream team. They beat MNM (Morrison & Mercury) to become the Tag Team Champions on an episode of Smackdown on December 16, 2005. They would lose the titles two weeks after this.

18. Sends Sabu Through a Table

It was ECW One Night Stand 2006. Rey was the World Heavyweight Champion facing Sabu. They did this crazy spot where Sabu set up a table on the floor, Rey jumped off the ropes for a springboard senton that drove Sabu through the table.

Rey and Eddie won the WWE Tag Team Titles from The Basham Brothers (Doug and Danny Basham, who were not really brothers). Rey and Eddie cheated to win by using a title belt to tease that Doug was going to use it, the referee was distracted and Rey handed Eddie another title belt. Eddie covered Doug for the pinfall win. This was at No Way Out 2005.

When Rey faced Brock Lesnar at Survivor Series 2019, he got an assist from his son Dominik, who wasn’t a contracted WWE wrestler yet. Rey and Dominik sent Brock into the ropes, which led to The Mysterios hitting a double 619 to Brock.

This was Rey’s second time winning the WWE World Title, which was on the Smackdown brand. They showed Rey hitting the 619 on Jack Swagger followed by the springboard splash for the pinfall win. This was at Fatal 4-Way 2010. Rey only held the title for four weeks before losing it to Kane.

Rey wasn’t always friends with Batista because there was a time when Batista turned on him leading to a rivalry. They showed a Steel Cage match that they had where Batista went for the Batista Bomb, Rey countered it by kicking Batista down and Rey kicked the door in Batista’s face leading to Rey dropping down to the floor to win the match. This was from the January 15, 2010 edition of Smackdown.

One of Rey’s best opponents all-time was Chris Jericho. They had a great feud that saw them exchange wins a bit. In this match at The Bash 2009, Jericho took off Rey’s mask, but Rey had another mask underneath it. Jericho was stunned by it, so Rey hit an enziguri kick, a 619 and a springboard splash for the pinfall win to become the Intercontinental Champion. By the way, this was also one of Rey’s best singles matches ever. I rated it ****1/2 out of five.

Rey was out of WWE for a few years in the mid-2010s. He was resting body while also working in some other places. In the 2018 Royal Rumble, he made a surprise return and got a huge ovation from the crowd as the 27th entrant in the Rumble match. It led to this final WWE run in his career.

This is probably one of the most memorable spots in WWE history. Rey ran down to the ring while some heels were stomping on faces, then he climbed up the cage and jumped off with a cross body block on Lance Storm and Christian, who caught him perfectly. Great spot. This was also the night where Rey made his Smackdown debut.

Rey and Eddie wrestled a lot in 2005. They had a rivalry where Eddie thought he could beat Rey, but every time they wrestled, Rey found a way to win. It led to Eddie turning heel on his best friend. In this match at WrestleMania 21, Eddie tried a backbreaker, but Rey countered it into a hurricanrana for the pinfall win.

This was from an episode of Smackdown. Matt Hardy was the Cruiserweight Champion that was going for a Twist of Fate, but Rey got a double leg takedown and turned it into a jackknife pin cover for the win. Rey’s family was at ringside. The crowd loved it. This aired on June 5, 2003.

It was a dream match. Shawn vs. Rey for the first time on TV was done on Eddie Guerrero tribute show on Raw following his death. The finish saw Rey use a headscissors to send Shawn into the ropes, then Rey hit the 619 kick and a springboard leg drop led to the pinfall win. Rey and Shawn hugged after the match. It was from November 14, 2005.

AJ Styles was the US Champion. Rey challenged him, Randy Orton got involved in the match at ringside and all they showed was Rey hitting a Frog Splash off the top rope to become the new US Champion. The fans loved that win too. This was from November 25, 2019 on Raw.

This was at WrestleMania 25 in Houston in 2009. Rey hit JBL with an enziguri kick to the head followed by a dropkick. That led to Rey hitting the 619 while JBL was against the ropes. Rey went up top and hit a top rope splash for the pinfall win. Rey become the new Intercontinental Champion while JBL retired after the match.

It was the “Thunderdome Era” with no fans in attendance at WrestleMania Backlash 2021. Rey teamed up with his son Dominik, who was now under contract, to challenge Dolph Ziggler & Robert Roode for the Smackdown Tag Team Titles. Dominik hit the top rope Frog Splash on Roode for the pinfall win. As most fans know, Rey and Dominik are the first ever father-son tag team to become Tag Team Champions in WWE. 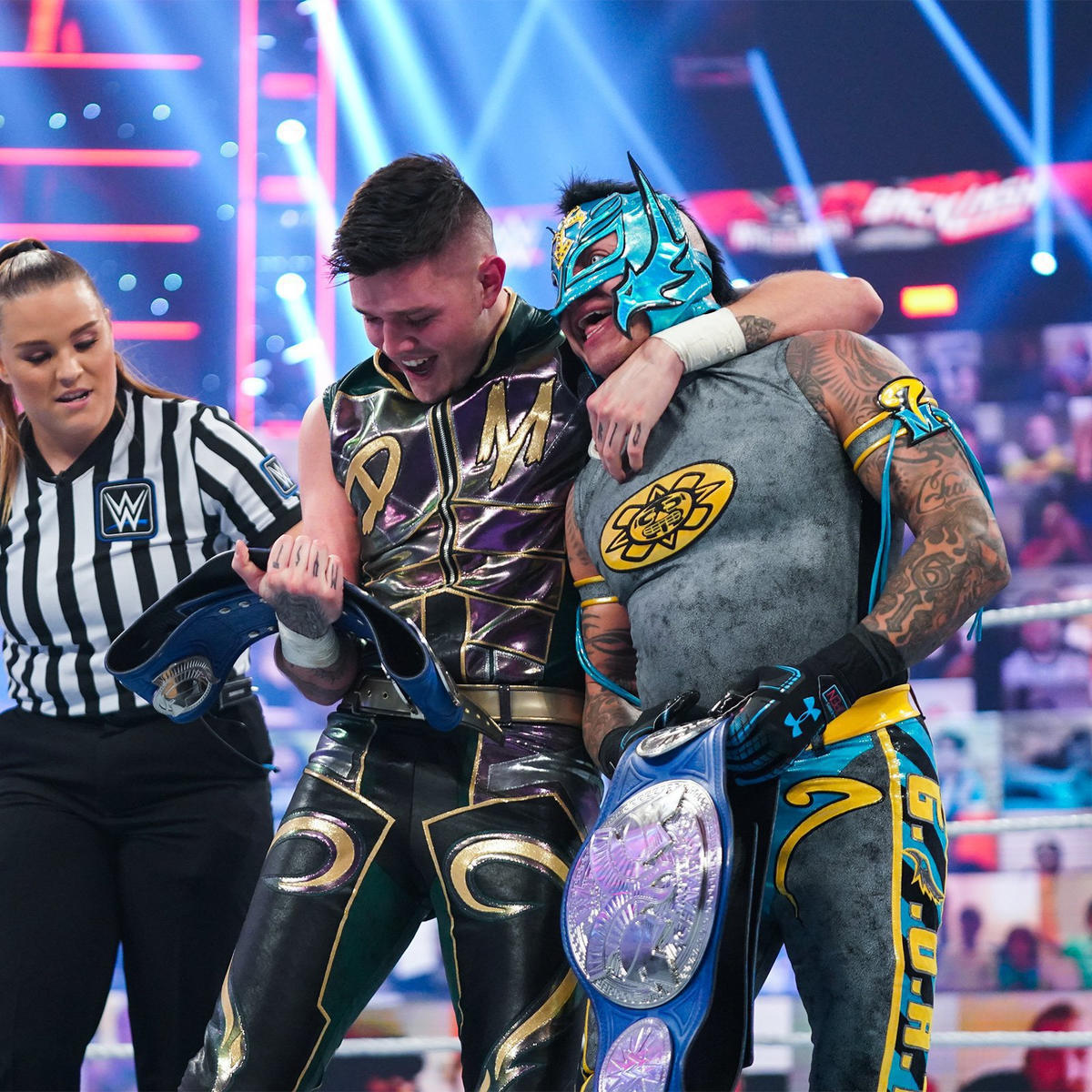 Rey hit a top rope hurricanrana on Miz sending him to the ropes, Rey hit the 619 and Rey went up top for a top rope splash for the pinfall win. This was during that time when the CM Punk situation was happening in the summer of 2011, so they crowned a champion in a tournament. Later that same night on the July 25, 2011 edition of Raw, Rey would face Cena for the WWE Title and Cena became WWE Champion again, so Rey had a very short WWE Title reign. It was Rey’s first time winning the WWE Title (instead of the World Title), so it was important in his career.

3. Wins Custody Of Dominik At SummerSlam 2005

The feud with Eddie Guerrero is back again. This time it was the end of the rivalry at SummerSlam 2005 where they had a Ladder Match where the winner would get Custody of Dominik, who Eddie claimed was his son even though Rey raised him. (In reality, Rey is his father, but it was an intriguing story). Anyway, the closing moments of the match saw Rey climbing the ladder and as Eddie tried going up the other side, Eddie’s wife Vickie pulled him down to prevent him from winning. That led to Rey’s win while Eddie was mad at his wife. It’s a good match. I’ll also remember the moment before this where Rey was swearing at Vickie because she was too slow to do her part for a planned spot.

No surprise here for number two. Rey started the 2006 Royal Rumble, he dedicated his performance to the memory of his late friend Eddie Guerrero and he made it all the way to the end of the match. The finish saw Randy Orton lifting Rey on his shoulder to try to toss him out, but Rey held onto the top rope. Rey ended up sitting on Randy’s shoulders leading to a hurricanrana over the top to the floor. Orton did a great bump there. Rey earned the right to challenge for a World Title with that victory.

It was Rey Mysterio challenging the World Champion Kurt Angle and Randy Orton, who was put in the title match even though he didn’t win the Royal Rumble. There’s a long story there. Anyway, this was a great match that sadly was kept under ten minutes and ended with Rey hitting a springboard hurricanrana on Orton for the pinfall win. It was Rey’s first time winning a World Title in WWE. It was another Rey match that he dedicated to Eddie Guerrero. Rey’s win at WrestleMania 22 should be the number one moment of his WWE career. I just wish it was a longer match because it was rushed and should have been given more time.

You can watch WWE’s video of Rey Mysterio’s 20 Greatest Moments below.

I thought the list was very good. You could be picky and replace some of the choices, but for the most part I think they got it right and the order was logical too.

They missed the best match of Rey’s WWE career. I know why they did because it involved Chris Benoit. That was No Mercy 2002 when Rey & Edge lost to Benoit & Angle for the WWE Tag Team Titles. I guess they also didn’t include it because it was a loss. Anyway, if you want my opinion on Rey’s best WWE match I would go with that one.

Congratulations to Rey Mysterio on 20 years since he started in WWE. At 47 years old with a lot of knee injuries in his career, he is near the end of run, but I hope he continues doing what he loves because he’s still great at it. Thank you Rey for all the entertainment over the last 30 years. What an incredible career.