Mick Foley has given his perspective on Vince McMahon returning to WWE as the Executive Chairman that is looking for a deal to potentially sell the company.

It’s been a whirlwind start to the year in WWE land with Vince McMahon coming back to he company after a five-plus month “retirement” that his seen him become the Executive Chairman of WWE again. It also led to Vince’s daughter Stephanie McMahon resigning as the WWE Chairwoman and Co-CEO, which leaves Nick Khan as the sole CEO for now.

While Triple H has told the WWE roster on Raw and Smackdown that he is still in charge of the creative end of the company, there are some people wondering how long it will take for the 77-year-old Vince McMahon to try to reclaim that spot that he had for the past 40+ years.

The reason Vince McMahon “retired” in the first place is due to multiple “hush money payments” to various women that Vince paid off due to some questionable behavior by Vince while he was running the company. It’s not like he stopped because he was getting old.

Mick Foley is a WWE Hall of Famer that has known Vince McMahon very well since debuting in the company as a wrestler in 1996. McMahon wasn’t a huge fan of Foley’s look, which led to Mick adopting the brown mask as “Mankind” for the first run in his career.

“It’s the second-shortest retirement in WWE history [laughs], following only mine, which lasted for six weeks. Hey, look, I know JR had told me years ago that he was worried for Vince in retirement because it’s safe to say that JR is a workaholic. There is a negative connotation because you apply so much of yourself to working. But even JR, he’s got the Oklahoma football, he has stuff that he loves in his life.”

“I don’t think Vince, Vince loves his family unconditionally, but I’m talking about hobbies. There no golfing, none of the things that you usually associate with men of his age. No scrap-booking for Vince. No birdwatching. Business was very, very personal, like his life revolved and his family revolved, around the business. So that was one of my concerns. What is he doing to do? He loves working. I don’t imagine him not being there in that Gorilla Position. It would seem like something was amiss if he wasn’t there.”

While Mick Foley admitted that he has enjoyed the WWE product more without Vince McMahon in charge of creative and with Triple H running the show, he still wants to see Vince happy.

“The company has been in a really good direction. There’s a reason why Jerry Lawler and Jerry Jarrett changed up the book every six months. Whether it was needed or not, it was a pair of fresh ears and eyes on the product, and they all put their own stamps on it. I think Hunter has had a chance to do that, and it’s a really fun show, with a lot of improvements made. I don’t know. I wouldn’t to be there because this is family, and now it’s become competition. I don’t know. It sounds like it has the possibility of getting ugly.”

“I do feel for Vince, and I care very much about Vince as a person. I’ve had my ups and downs with him over the years, but that’s been largely business. Always respected him, always genuinely liked him, and I want to make sure that this guy who meant so much to my life is happy. Let’s see what happens.”

As he continued, Foley hinted that he knew something was coming months ago while also taking a shot at the bad sell job that Vince did at WrestleMania 38 when Steve Austin hit him with a Stunner.

“I was given the iggy a few months ago that something might be happening, and now it’s happening. It’s going to be interesting, for sure. But Vince coming around, you’re talking about a guy who literally stole last year’s Mania with the Stunner for the ages. Sorry Steve [laugh].” 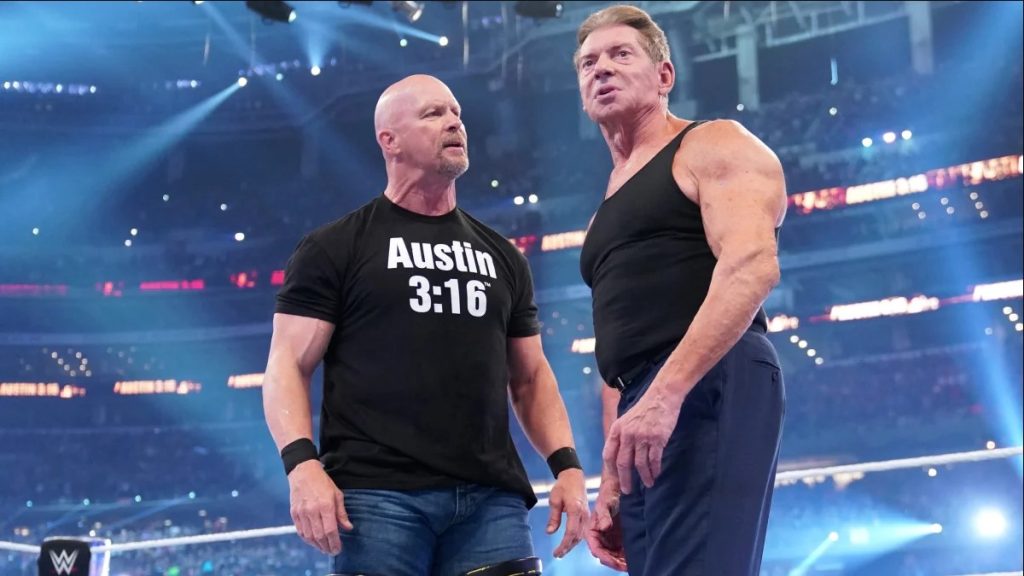 Mick Foley would go on to say he didn’t know if Vince was going to try to shake things up even though that’s something he has done in the past.

“I don’t know. He’s Vince. It’s in his nature to shake things up, right? It may not have been the most efficient way to write a show and perform a show where a gentleman takes a sharpie through six days of hard work. But I believe that’s how Vince feels he works best, under pressure. That’s his way of doing things. I think he loves the idea of shaking things up so he can thrive. I don’t know if that means he would shake things up after the Rumble, before Mania, or wait untitled afterwards, but it’s going to be interesting for sure.”