This is a review of a Youtube video that WWE posted counting down Braun Strowman’s 10 Greatest Moments.

Braun signed with WWE in 2013 without any prior wrestling training. He was very successful in Strongman competitions and was recruited by WWE due to his massive frame at 6’9″ and 350 pounds (or larger at times). By August 2015, he was part of the Wyatt Family group led by Bray Wyatt.

During the WWE Draft in July 2016, Strowman became a singles wrestler on the Raw brand that won a lot of singles matches in quick fashion. By the time 2017 rolled around, he was clearly one of the top guys on Raw and also headlined some pay-per-view events as the year went on. After accomplishing like winning the Tag Team Titles, winning Money in the Bank and the Greatest Royal Rumble, Strowman finally became a WWE Universal Champion in 2020. Sadly, there were fans in attendance for that.

In June 2021, Strowman was released by WWE a few months after a lackluster feud with Shane McMahon, which sucked because of the story, not the wrestlers. WWE claimed that it was “budget cuts” even though 2021 was the most profitable year in company history. Fast forward to this past Monday on Raw and Strowman was back in WWE (in the best shape of his life) at 39 years old after 15 months.

As usual, I’ll provide context for those moments and share my thoughts as we go through the countdown. Remember, this is WWE’s list, not my list.

10. Returns With A Rampage

They started off with Braun’s surprising return on Raw this past Monday when he interrupted a fatal four-way tag team match. Braun destroyed everybody in sight including a clothesline on Chad Gable, tackling Otis through the ringside barricade and giving Angelo Dawkins a Running Powerslam through the commentary table.

Braun won the Andre the Giant Battle Royal at WrestleMania 35 in 2019. The creative team had nothing better for him to do, so he was feuding with Saturday Night Live’s Colin Jost and Michael Che. It was a weak storyline, but Strowman winning the battle royal was something worth celebrating. 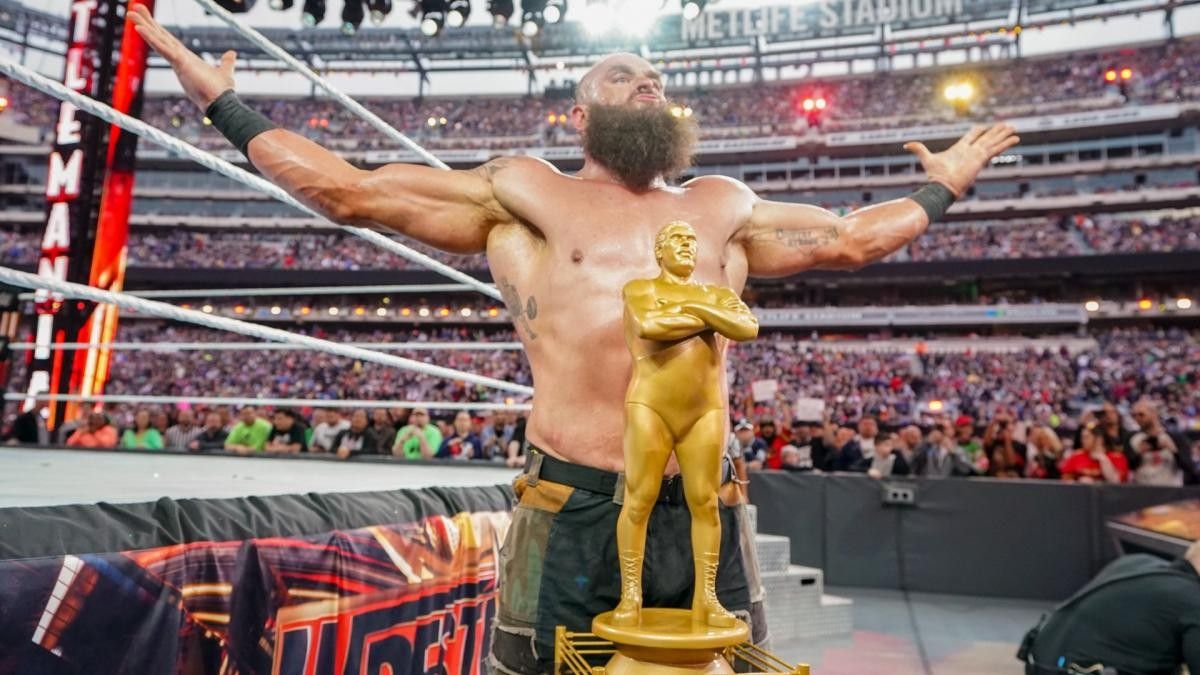 Braun won the Raw Tag Team Titles with a 10-year-old kid named Nicholas, who Braun “randomly” picked out of the crowd. They beat The Bar duo of Cesaro & Sheamus at WrestleMania 34 in 2018 with Braun hitting a Running Powerslam on Cesaro for the win. The kid is actually the son of WWE referee John Cone, who was also the referee of the match. That was not stated by WWE, but we all knew about it if you followed WWE online. 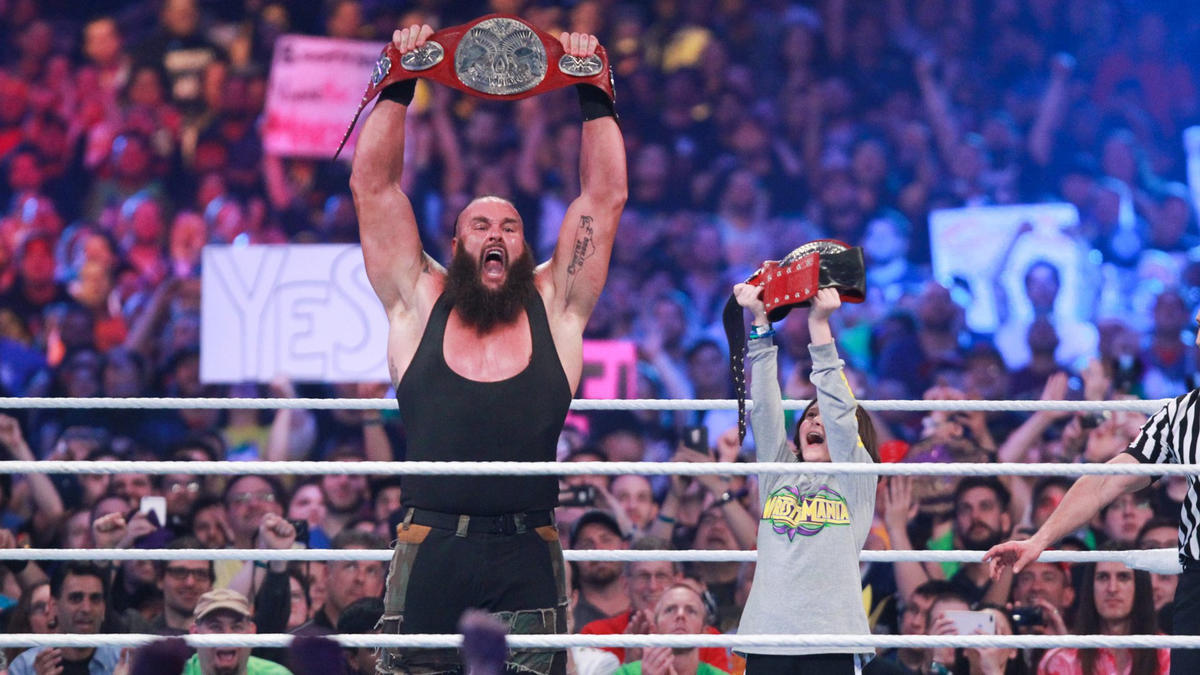 7. Drops The Raw Set on Brock Lesnar and Kane

After Braun beat up Brock Lesnar and Kane, the big man grabbed a hook that he tossed up to the top of the Raw set. Strowman pulled the set down so that it “crashed” onto Brock and Kane, who were down by nearby tables. In reality, the steel structure didn’t touch Brock or Kane because the top of it landed on some steel structures that were above the guys that were on the floor, but we are supposed to believe that Brock/Kane were injured by it.

Braun had a long rivalry with Roman Reigns, especially in 2017 when it seems like they wrestled five or six times in televised matches. It may have been more than that. Anyway, they would have an Ambulance Match at Great Balls of Fire 2017 where you have to put your opponent into the back of an ambulance. This match ended with Reigns going for a Spear, Braun moved and Roman jumped into the ambulance. Braun shut the doors to win the match.

5. Pushes Over A Tractor Trailer

During his WWE career, Braun was featured in a lot of “strongman” type segments. In this case, there was a tractor trailer in the backstage area and Braun flipped it over. Thanks to pre-taping a segment like that, plus shooting it from different angles and likely inserting noise, they made it seem like Strowman actually did it. That’s the magic of television, my friends. This was on the January 15, 2018 episode of Raw.

This was on an episode of Smackdown on January 31, 2020 with Shinsuke Nakamura as the Intercontinental Champion that had Cesaro & Sami Zayn at ringside. They showed the end of the match with Braun sending Nakamura into the exposed turnbuckle followed by the Running Powerslam for the pinfall win. It was Braun’s first singles championship in WWE.

3. Collapses Ring With A Superplex

There were a few Braun Strowman-Big Show matches on Raw in 2017. I think it was WWE’s way of having the legendary giant Show put over the newer giant Strowman, which is smart to do. I was actually surprised that the matches were good because sometimes big man matches can be stinkers.The most memorable match they had was on April 17, 2017 when they did the “ring collapse” spot in the match. Strowman gave Show a superplex, the ring collapsed and the fans went wild as referee John Cone bumped to the floor as well. This spot has been done before with Brock Lesnar/Big Show and Mark Henry/Big Show, but you can see the reaction of the crowd. They loved it because it works. This should absolutely be on this list. Good choice.

2. Wins Money In the Bank

One of the biggest wins of Braun’s career was when he won Money in the Bank in 2018. The finish of the match saw Finn Balor at the top of a ladder touching the briefcase while Strowman climbed up the other side while Kofi Kingston was on his back. Braun managed to knock Balor down and Braun launched Kofi off his back. Braun climbed near the top of the ladder to capture the briefcase. The fans popped for Braun’s win. Strowman would not go on to successfully cash in the briefcase to become a champion. 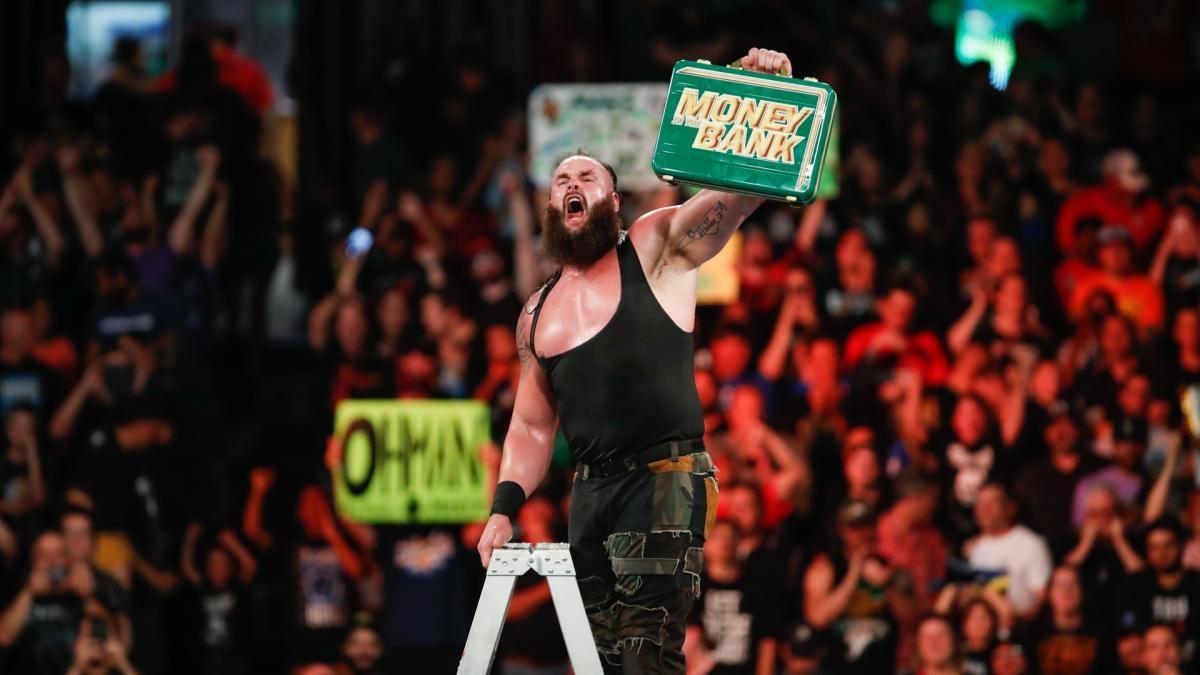 The largest Royal Rumble took place at an event called Greatest Royal Rumble in Saudi Arabia in 2018. Remember the Titus O’Neil slip? Of course you do. The match had 50 wrestlers in it meaning it was the largest Royal Rumble ever because there was a 40-man Royal Rumble once and the standard number is 30 entrants, so WWE decided to go with 50 superstars this time around. Strowman ended up getting the win by last eliminating Big Cass to win the match. Strowman was handed a championship trophy and a green title belt that was never defended.

They missed the big one. Strowman won the Universal Title at WrestleMania 36 when he beat Goldberg in front of no fans at the WWE Performance Center. Since the COVID-19 pandemic was in its early stages, WWE ran shows without fans around. I get that WWE may not want to celebrate the fact that they did shows with no fans, but it is it right to completely ignore that it happened? Winning the Universal Title, aka the other main WWE World Title, should easily be number one on this list.

For what it’s worth, two years ago WWE did a Top 10 countdown of Braun’s biggest wins and put the Universal Title win first as they should have.

I think the rest of the list is perfectly fine in terms of how they are ordered. I may have changed around one or two things, but I think they got it right. I just think it’s dumb to ignore the biggest moment of his career when he won the Universal Title just because there were no fans there.