The Elite trio of Kenny Omega and The Young Bucks returned to AEW at Full Gear and they did so with some new theme music that’s a classic rock song.

At AEW Full Gear, Death Triangle defended their Trios Tag Team Titles against The Elite. It was the first match for Omega and The Young Bucks (Matt & Nick Jackson) since they were suspended for getting into a backstage fight with CM Punk & Ace Steel after AEW All Out on September 4th, which is when they became the inaugural Trios Tag Team Champions.

Omega and The Young Bucks, who are Executive Vice Presidents in AEW, failed to beat Death Triangle because Pac handed Rey Fenix a hammer that he used to hit Omega in the head while Omega was setting up for the One Winged Angel. The referee never saw the hammer usage, so Pac, Fenix & Penta kept their titles.

For their entrance, The Elite entered to a new theme song that isn’t necessarily a new song at all. The song that The Elite used was “Carry On Wayward Son” by the band Kansas, which was originally released in 1976. It’s a very popular classic rock song that has lasted many generations after it initially came out.

It has been reported by the Wrestling Observer’s Dave Meltzer that “Carry On Wayward Son” will be used for The Elite’s trios matches meaning only when Omega teams with The Young Bucks.

According to the report, The Young Bucks wanted to use the song for a long time because they are big fans of the song and so is their father. Meltzer added that the song has nothing to do with what happened at All Out and is simply just a song that the group wanted to use for their entrance. It was also noted that The Young Bucks used “Carry On Wayward Son” as their entrance when they were backyard wrestlers as teenagers.

As for The Elite’s rivalry with Death Triangle, that’s going to continue because they are now in a Best of 7 series against the champions. 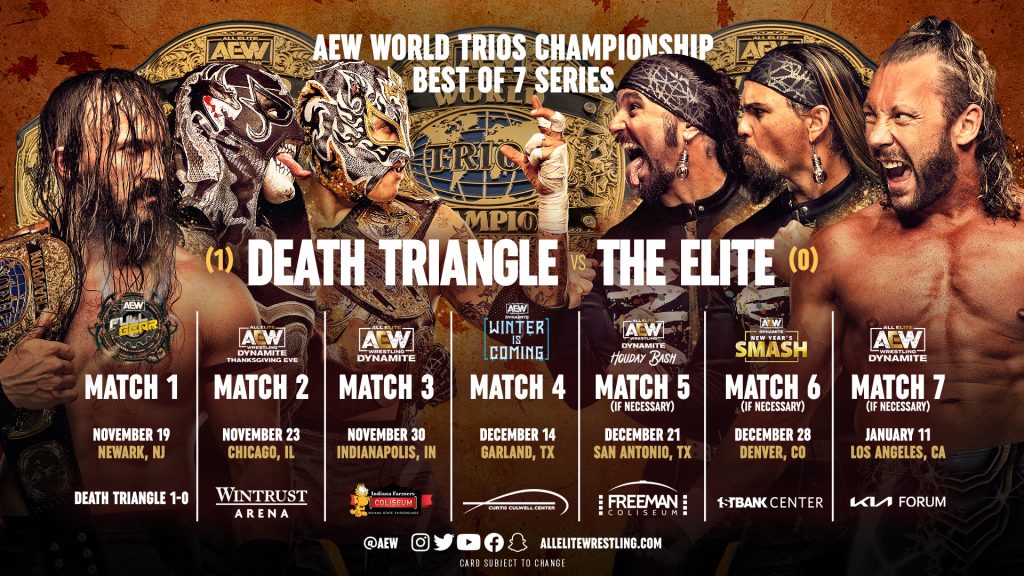 The schedule released by AEW means that if they go to seven matches, then the series will last nearly two months with a possible ending at Dynamite in Los Angeles, which is near where The Young Bucks are from.