Logan Paul has made a bold statement leading up to Crown Jewel by saying that WWE fans will be forced to respect him after they see his performance.

The countdown is on for WWE Crown Jewel this Saturday, November 5th when Roman Reigns defends the Undisputed WWE Universal Championship against Logan Paul.

At Crown Jewel, Paul will be wrestling in just his third WWE match. Paul’s first match was at WrestleMania 38 in April when he teamed up with The Miz to defeat Rey & Dominik Mysterio. After an impressive performance in that match, WWE signed Paul to a contract in June. At SummerSlam on July 30th, Paul beat The Miz in his first singles match.

On September 17th, WWE held a press conference where they officially announced the Reigns-Paul match. Paul recently sent a message to Reigns by punching out Roman’s cousin Jey Uso on Smackdown.

During an interview with Verge Magazine, Paul claimed that WWE fans will be forced to respect him if they don’t already respect him.

“If the WWE fans don’t already respect me, after Crown Jewel in Saudi Arabia on November 5th, you will be forced to respect me. You might not like me. I might not be your favorite wrestler, but you will have to respect what I can do in that ring, and that’s my goal. I could give two ***** who likes me or not, but you will always acknowledge that when I get in that ring, you are going to be entertained. That’s my goal.”

“It’s been an evolution of how people identify me when they see me in the streets, right? At first it was ‘The Vine Guy’, and then it became ‘I’ve seen your videos Guy.’ Then it became ‘The YouTube Guy’. Then it became ‘Yo, Paul Something, right?’ Then Logan Paul ‘WWE Superstar’. After all these years, I feel like that title is the one with the most validity. Not that I need to be validated, but also it’s awesome that I’m validated with a title like that because immediately you get respect and at the end of the day, everyone just wants to be respected. I think it’s really hard to not respect someone who’s willing to get in that ring and sacrifice their body for the entertainment of millions of people. It’s incredible.” 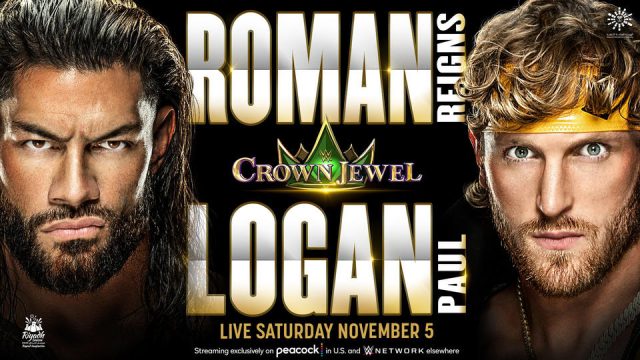 You can watch WWE Crown Jewel on Saturday, November 5, at 12 p.m. ET/9 a.m. PT, streaming live from Riyadh, Saudi Arabia, exclusively on Peacock in the U.S. and on WWE Network everywhere else.