Dax Harwood has explained how he felt after taking one of the most painful bumps of his career recently.

At ROH Final Battle last December, the FTR duo of Dax Harwood and Cash Wheeler defended the ROH Tag Team Titles against The Briscoe Brothers (Mark & Jay Briscoe) in a Double Dog Collar Match. It was a match that can only be referred to as a bloodbath that also was praised universally as one of the best tag team matches of 2022 and perhaps all-time.

The match was won by The Briscoe Brothers, which put an end to FTR holding the ROH Tag Team Titles. FTR also recently lost the AAA and NJPW Tag Team Titles as well so they went from carrying three sets of Tag Team Titles in 2022 to having none of them now in the first week of 2023.

On a recent episode of his FTR Podcast, Dax Harwood talked about taking a scary bump when he was given a superplex onto a pile of steel chairs.

“So he gives me the superplex and dude, it’s the most painful bump that I’ve ever had. I still have a knot on my ass all the way up to my lower back. I have a bruise that is completely covered my left butt cheek still right now. You know where, you know, before we got on, I talked about Mexico. I just got back from Mexico, and the flight to Mexico was so brutal dude. It was so uncomfortable.”

As he continued, Dax Harwood spoke about what a wrestler thinks as he’s about to take a big move like that.

“You know, if it’s my idea, I’m absolutely not going to ask someone else to take it, you know. So I didn’t think about the pain at all until after the crotch and he starts pulling me up for the superplex I’m like, so many thoughts go through my head. I remember thinking like, oh my god, this is gonna hurt really bad, that sort of thing.”

“I started thinking like, okay, all these chairs are flat. They’re they’re, they’re stacked on top of each other. They’re flat, it’s gonna hurt but it’d be fine because everything’s flat, right?”

A photo of the spot that Harwood was talking about can be seen below. 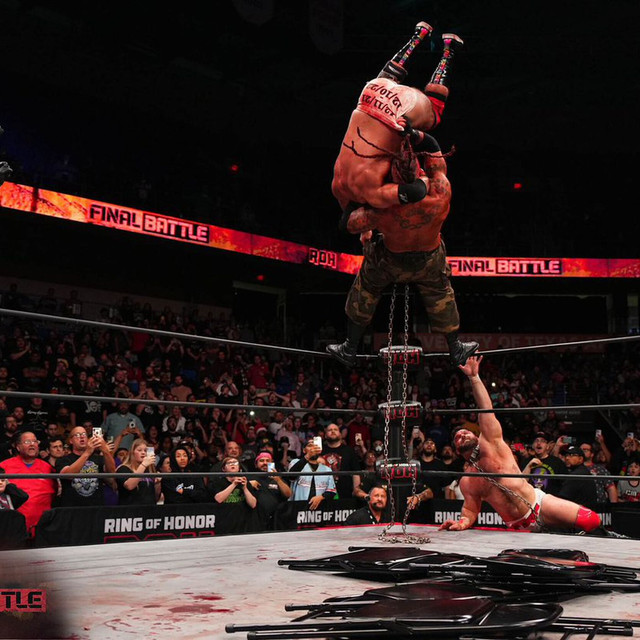 Will Brock Lesnar Be At WWE Elimination Chamber?