Carmelo Hayes has explained why he thinks Shawn Michaels is the perfect guy to run WWE’s NXT brand.

Ever since WWE rebranded NXT in September 2021 and then rebranded in the last few months, Carmelo Hayes has been one of the biggest stars of the brand. After all, Hayes is a former two-time NXT North American Champion that could be ready to take the next step as a challenger for the NXT Title as well.

Shawn Michaels is the WWE Senior Vice President of Talent Development Creative that’s in charge of the NXT brand meaning he has been calling the shots for the majority of Melo’s time on television. Michaels has spoken highly of Hayes in the past because as a two time WWE Hall of Famer that is considered to by some to be the best in-ring performer in WWE history, Michaels was that cocky heel character in his 20s just like Hayes is now.

Coming up at NXT Deadline, Hayes is in the first-ever Men’s Iron Survivor Challenge match with JD McDonagh, Grayson Waller, Joe Gacy & Axiom. It’s a match that will go 25 minutes with some unique stipulations. It’s a match where many people will predict Hayes to win because it just may be the right to have Hayes challenge Bron Breakker for the NXT Title, just as long as Bron wins his match with Apollo Crews as well.

During a recent interview on Instinct Culture by Denise Salcedo. Hayes spoke about what it’s like working with Michaels:

“Sometimes I always say this, like, I have to step out of my shoes and realize that it’s Shawn Michaels, like Mr. WrestleMania, HBK, like, that’s Shawn Michaels. We see him so often now it’s kind of like, you know, you see him regularly and you talk to him and he doesn’t act like Shawn Michaels. He’s just like a regular guy. He’s just humble. But every time he talks to me, he says something, even by accident, that I’m like, whoa, like that hit me.” 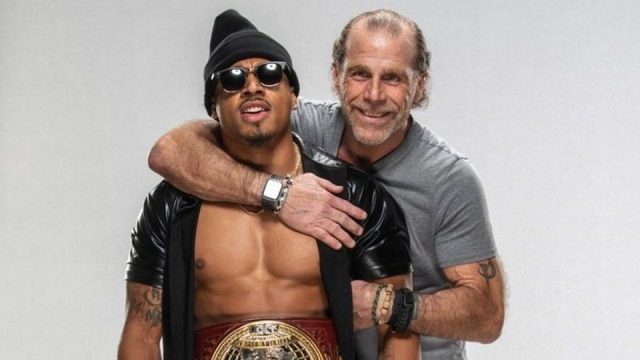 Carmelo Hayes went on to explain that he listens closely to Michaels while adding that he feels the Heartbreak Kid is the right guy for the job he has.

“I try to listen very closely when he talks to me because he might say something in passing or something that sticks with me. So I’ve just learned so much from Shawn, and coming from a guy that has done everything, everything here, has made every mistake, has done everything from WrestleManias to first time matches to everything. He really is the perfect guy to have running something like this where you got all this new talent. So, yeah, I’m just a sponge when I’m around him.”