Anthony Bowens has recalled how the “Scissor Me Daddy Ass” phrase started in AEW because he needed something to say during The Acclaimed’s tag team entrance.

The Acclaimed duo of Max Caster and Anthony Bowens are one of the most popular acts in All Elite Wrestling. It wasn’t always that way because they started out as a cocky, heel tag team and were in that role for a while until they became faces in the second half of 2022.

That popularity with the fans led to The Acclaimed winning the AEW Tag Team Titles for the first time at Dynamite Grand Slam on September 21, 2022. It isn’t just Anthony Bowens and Max Caster that’s part of the act, though, they also have Billy Gunn on their side as well.

Whenever The Acclaimed makes their entrance in AEW, Caster fires off an entertaining rap where he has shown that he isn’t afraid to say anything on his mind. Bowens usually followed up by shouting the name of the city and saying something to get them to cheer (when they were faces). Bowens added the phrase “Scissor me, Daddy Ass” in reference to Gunn, who is the father of The Gunns team that fans refer to as “The Ass Boys” since Billy Gunn used to be “Mr. Ass” in his WWE career.

The “scissor me” hand gesture is when you spread your fingers apart and put them together with another person almost like a handshake.

While speaking to Chris Van Vliet on his popular YouTube show recently, Anthony Bowens explained how “Scissor Me, Daddy Ass” came to be.

“One day, it was probably about five minutes before we went out to, I think it was Rampage? I think it was a battle royale on Rampage. And I was sitting in the wheelchair and I was giggling to myself. I was trying to figure out a way to end our entrance, because Max would rap, I would get the crowd to yell ass boys, but I didn’t have an ending. And I just giggled to myself and I thought I think I’m just gonna say ‘scissor me Daddy Ass.’ I don’t know why that popped into my head, but I started laughing. Literally, me like sitting in the wheelchair in gorilla just like laughing at it.”

“And then I didn’t tell anybody, I think I had told Billy, I think I’m gonna say ‘scissor me Daddy Ass.’ He didn’t say anything. I just remember he just smiled at me and he walked away. And that was it. Five minutes later, when I screamed it on Rampage, I came back, I looked around, no one said anything to me. I was like, okay, so I guess that was okay. And then it was trending. And then I started to see the signs, that’s when you know. I’ve got to say this every single week.”

Next week on Dynamite, The Acclaimed and Billy will be part of a “Family Therapy” session with The Gunns. 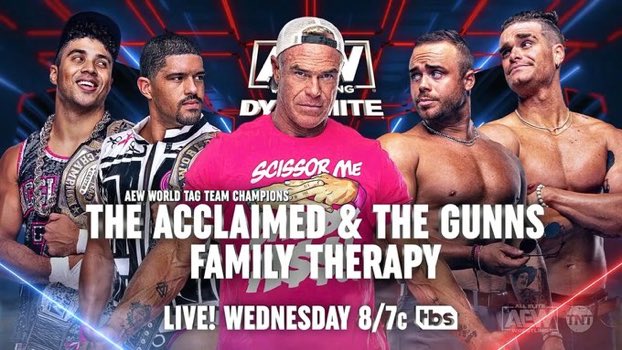