Cody Rhodes has revealed that he still has some merchandise from the All-In pay-per-view that he helped create in 2018.

On September 1st, 2018 in Chicago, Cody Rhodes was among the wrestlers that put on the All In pay-per-view from the Sears Centre in Chicago with over 11,000 fans in attendance. Cody was joined by Kenny Omega and The Young Bucks.

At All In, Cody challenged Nick Aldis for the NWA Worlds Heavyweight Championship. Cody won the match and he was very emotional after the match because he was able to win a title that his late Hall of Fame father Dusty Rhodes held many times in his career as well.

All In was the show that led to what would become All Elite Wrestling when Tony Khan announced his new company with Cody and The Young Bucks announced as Executive Vice Presidents in the company. Later in the year when he was a free agent, Omega joined the three wrestlers as an EVP as well.

From the start of AEW in 2019 over the next three years, Cody was one of the biggest names in the promotion. Cody was the inaugural AEW TNT Champion and would go on to hold it three times during his career.

At WrestleMania 38 in April 2022, Cody returned to WWE after six years away. Rhodes defeated Seth Rollins at June’s Hell in a Cell Premium Live Event while wrestling with a torn pectoral muscle.

Recently, Cody shared an image on his Instagram story where he revealed that he keeps his All In access pass in his truck.

“Hanging in my truck. Everyday on the way to PT, a nice little reminder to shoot for the furthest goals and to dream bigger every day.” 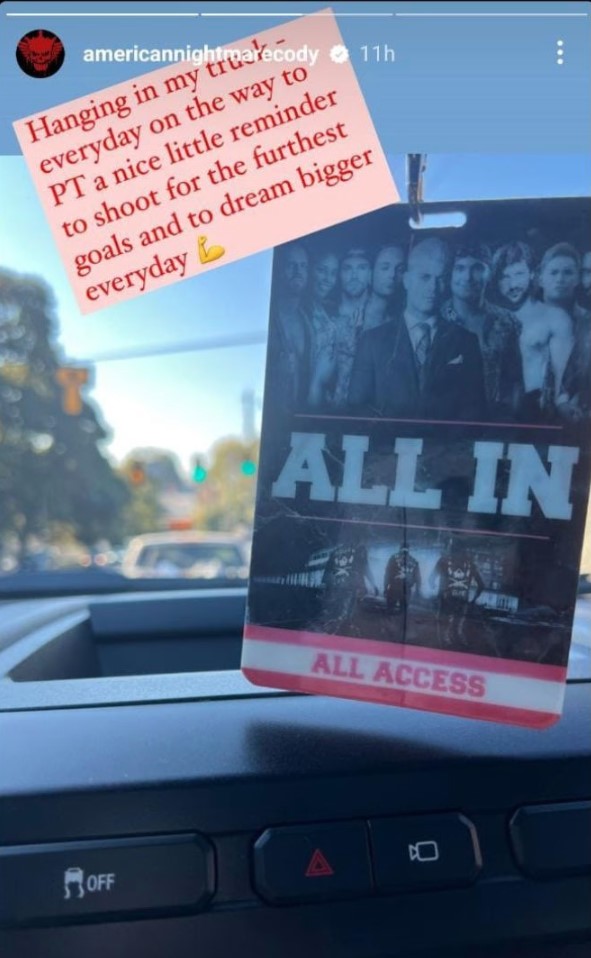