Welcome to the WWE Raw Reaction, where I offer up my take on this week’s show from Brooklyn, NY.

We kick off the “season premiere” with Degeneration X up to their usual antics backstage. They censored the swear words out and got in a “choke the chicken” gag. Classic DX style.

The usual Raw opener and theme song get us rolling. Corey Graves introduces us to his new broadcast partner, Kevin Patrick. Patrick is an interesting choice, swapping roles with Byron Saxton while Jimmy Smith is gone.

We go to the ring for Promo Time with The Bloodline. Reigns asked Jey Uso if he was a fool. Zayn interjects, pointing out how Reigns made Jey Zayn’s problem back on Smackdown. The crowd just goes nuts for Zayn. This is probably the most over he has ever been in WWE. Zayn asked where’s the love for Jimmy, who cheeses it up a little. Jay wasn’t too happy, Bro. Matt Riddle interrupts things and wants another shot at Roman, despite their title match stipulation several months ago. Actual continuity! Reigns passed so Riddle asked someone else to step up then. Jey volunteers Zayn and Zayn accepts Riddle’s challenge. It was a great opening segment that went a little long, but didn’t drag it out.

Our opening contest is Austin Theory taking Johnny Gargano. The match was really good, as one would expect from a Johnny Gargano match. They keep pushing this youngest Money in the Bank winner on Theory, but he sure doesn’t really do anything with the briefcase. I know there’s still time and he’s had a few attempts but he just doesn’t seem interested in cashing in. Gargano picks up the win, which was good to see, but Theory is falling into the jobber hole most MITB winners endure. Could he be waiting for a new champion or are they thinking about taking the briefcase off of him?

Up next, Rey Mysterio takes on Chad Gable from Alpha Academy. Otis came out with Gable. The match was really good, given the skill in the ring. Rhea Ripley and Dominik Mysterio show up mid match to watch from ringside. Rey picks up a much-needed win and I really hope Gable gets a serious run with the United States title as a reward for the greatness lately.

After the match, Dominik tries to get Rey to hit him and that doesn’t work. We do get another boring Judgement Day beatdown to get Dominik more heat. It is impressive how Dominik has been able to draw so much heat from the crowd so quickly.

That lead us into Promo Time with Judgement Day. They brag about what they did to Edge and Beth Phoenix at Extreme Rules. Balor then moves on to AJ Styles, who comes out. Styles was talking about their friendship and that everything he needed was right here. Balor and Styles hugged before Styles said that he wasn’t talking about Balor. The OC is back together as Karl Anderson and Luke Gallows storm down the aisle and the fight is on. The OC cleared the ring and sent the Judgement Day in retreat. It was good to see that Ripley was effectively neutralized for this, delegated to pulling Dominik out of the fight. We need to get some female competitors added to the mix to occupy Ripley, since the guys can’t fight her and that hurts the group presentation.

Damage CTRL was doing a sitdown with Byron Saxton backstage talking about what happened at Extreme Rules ahead of Bayley’s match with Candice LeRae. The match was good but the fans didn’t really care all that much about LeRae. They opted to give LeRae the upset win instead of giving Bayley her win back. After the match, Damage CTRL showed up to beat up LeRae. Bianca Belair tried to make the save but the numbers game won out. Apparently, nobody wants to help out.

The Miz’s Birthday Celebration is up next. There are presents and a cake in the ring, so we know how this is going to end. We are treated to some awful acting and massive balls jokes. At least they cut to the chase and the first present had Dexter Lumis in it. Miz and Lumis scuffle for a minute before Miz pushed Maryse into the cake. It looked like she didn’t want to take that bump and barely knocked the cake over. Miz finally runs away leaving Maryse with Lumis. She bails so Lumis can pop the two big exercise balls with Miz’s face on them before helping himself to a piece of cake. The crowd popped for the cake cutting.

Miz runs into DX backstage and demands to see Triple H. Instead, Road Dogg books Miz in a match with Lumis next week. If Lumis loses, he’s gone from WWE. If Lumis wins, he earns a Monday Night Raw contract. Miz accepts the challenge. Well, we know who’s going to win that match now.

Omos obliterates a couple of guys that DX hyped up backstage.

Promo Time with Bobby Lashley is up next, sort of. Lashley goes to speak about being a fighting champion before he is interrupted by…Brock Lesnar? Lesnar destroys Lashley with a couple of F5s and a Kimura Lock before leaving. That was a surprise for sure. I’m guessing that this is the setup for Lesnar/Lashley at Crown Jewel.

Seth Rollins comes out wanting his United States title match they were scheduled for. Lashley gives it to him and Rollins picks up the title in a short match to become the second-ever two-time Grand Slam Champion. So, this just adds more fuel to the Lashley/Lesnar match and Lesnar can get his win back since the US Title is no longer in the picture.

Elias rises from the dead next week, or are we supposed to forget about that?

Sami Zayn is out with the Usos to take on Matt Riddle in our main event match. The match was really, really good. The match played perfectly into the Sami Zayn/Jey Uso story for the night. Zayn told Jey he didn’t need any help and when Zayn needed it, Jey didn’t help him. Riddle picked up the win and Zayn let down the Tribal Chief, who had left with Solo Sikoa earlier in the night, leaving the Usos with Zayn.

It’s DX time as their music plays to celebrate their 25 years. They run through the standard DX fare, with Road Dogg doing their usual introduction with out mentioning Billy Gunn by name. It was a nice little celebration with no angle or anything tied to it. The show ends with DX doing their classic pose in the ring together. 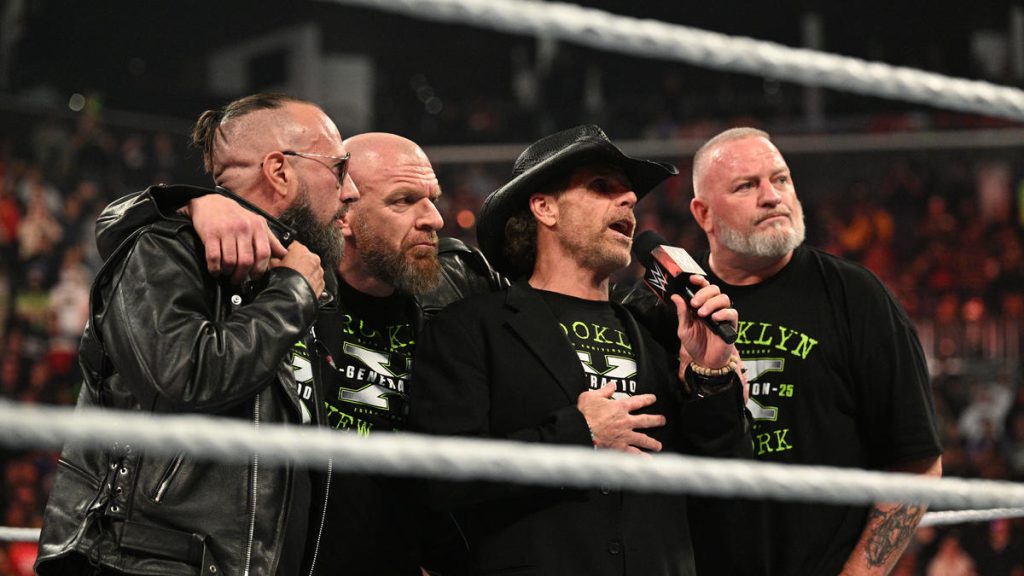 John rated this week’s show at a 7.75 out of 10 and that’s fair. The show was quite entertaining and the matches were solid. I’ll go and give the show a 7 out of 10.

The Riddle/Zayn match was the match of the night. Both are super talented and put together a really entertaining main event match. It also played into the Bloodline theme for the night between Zayn and Jey Uso. Zayn is doing some of his best work right now.

We had a few good surprise returns in Gallows and Anderson and Brock Lesnar. I think The OC might be the ones to stand up to The Judgement Day. I’m hoping that someone gets added to counter Rhea Ripley. Brock’s only back for that Saudi check.

Kevin Patrick was hard to hear at certain points. I don’t know if it is just because he is soft-spoken or his mic was just too low. He seemed to do good his first night out.

It is a shame Candice LeRae didn’t get a better reception from the Brooklyn crowd. I think she needs to be better presented in the future.