CM Punk is one of the most polarizing wrestlers to ever step foot in a wrestling ring. Most wrestling fans either really love the guy or can’t stand him. There’s really no in between.

The new AEW World Heavyweight Champion is now sidelined with an undisclosed foot injury that required surgery, so best wishes to him on a full recovery. The purpose of this piece is to analyze the recent back and forth between CM Punk, Tony Khan, and the former head of WCW, Eric Bischoff. It was about one month ago when Bischoff claimed on his podcast that Punk was “the biggest financial flop in wrestling history.”

The back and forth really kicked in last year when CM Punk made his return to professional wrestling in AEW. It was hyped and delivered a strong viewership for a 10pm Friday night Rampage show. It was a great moment. One of the loudest sustained pops I’ve heard in years. His Pro Wrestling Tees store crashed because of the demand for his shirts. However, it is things that Tony Khan said that seemed to get under the skin of Eric.

Tony stated that if Ted Turner knew as much about booking as he does, WCW would still be around. First of all, that wasn’t Ted’s job. Ted was WCW’s owner. That’s why he hired people who could do the job. Tony has been booking AEW by himself for two years. Being a diehard wrestling fan and watching it your whole life does not make you a great booker. If that was the case, where do I put in my application? It was nonsense and Eric rightfully got upset about it due to his close relationship with Ted.

This led to discussions about how much AEW has actually grown in the three years it has been around. That can be measured in a number of different ways. You can go by television viewership, which has remained relatively the same since about February 2020. You can judge by Pay Per View buys which have increased slightly year over year. You can’t really judge merchandise because that information is not readily available. YouTube numbers and attendance, both of which have seen increases, are other ways to measure success. 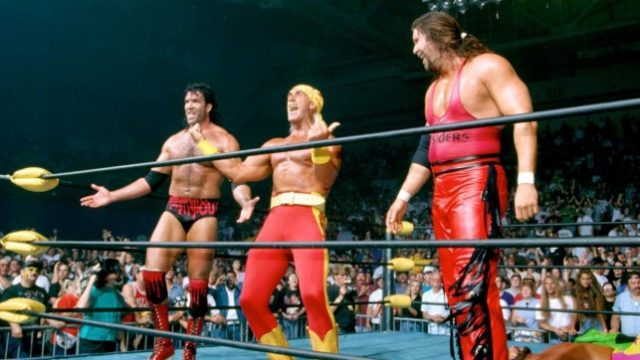 One thing CM Punk said that sent Twitter into a frenzy was when he compared the arrivals of himself, Bryan Danielson, and Adam Cole to the arrival of the NWO to WCW. Sure, it can be argued that CM Punk had more success in WWE than Kevin Nash did. You can even make the case that Bryan Danielson had more success in WWE than Scott Hall. However, The Outsiders arriving in WCW changed the business forever. NWO shirts are still best sellers even in 2022, 26 years after they arrived. I’m a fan of Danielson and Cole, but making that comparison was silly. The Attitude Era had more viewers than any time in the history of the business and that fire was started mostly by Scott Hall and Kevin Nash.

I mentioned in a column last year that I thought the additions of CM Punk and Bryan Danielson would cause a momentary bump in viewership before it settles back down once the novelty wears off. CM Punk’s Rampage debut drew a 1.12 million viewership, which was excellent for a show at 10pm on a Friday night. Unfortunately the next week drew 722,000 and they declined for seven straight weeks after that. Now, I don’t think anybody expected Rampage to average 1.12 million viewers every week. However, declining viewership for seven straight weeks shows there wasn’t enough interest in Punk’s debut to keep people coming back.

Today, they average roughly around 500,000 viewers for Rampage when they’re in their regular time slot. I know people will talk about their pre-emptions due to NBA/NHL Playoffs and that’s valid, but everybody gets pre-empted. Smackdown gets bumped to FS1 for the World Series every October but nobody seemed to give them a break when they only averaged 1 million viewers compared to the 2 million they get on Fox. Preemptions happen all over television in every kind of programming. Arn Anderson once said it best. If you have what people want to see, they will find a way to watch regardless.

CM Punk debuted on Dynamite on August 25th and pops the viewership to 1.172 million and a 0.48 in the 18-49 demographic. The next week drew 1.047 and 0.37 in 18-49. That means at least 125,000 people sampled Punk’s debut and decided not to come back. Even a step further.. The Post All Out Dynamite. Remember All out had CM Punk’s first match in seven years as well as the debuts of Adam Cole and Bryan Danielson that Punk said was better than The Outsiders joining WCW. The post All Out episode drew 1.319 million viewers and a 0.52 in the 18-49. Those were some of the highest numbers in their history and got a lot of people, including Chris Jericho, claiming that AEW would pass WWE Raw in 2022. The next week drew 1.175 million and 0.44 in the 18-49. That means 144,000 people sampled the debut of Punk, Cole, and Danielson and did not come back. Dynamite last week got 939,000 viewers. Yes, they competed against the NBA Finals. Then, when you look deeper, they haven’t drawn over 1 million viewers since March 23rd, 2022. So, unless they draw 1 million tonight or next week, it’ll be three months since they drew 1 million viewers. As I mentioned earlier, nobody expected Rampage to draw 1.12 million viewers every week at 10pm. However, Dynamite is the A show. It’s the flagship. One million viewers should be the minimum.

This time last year they were on those Saturday Night Dynamites so their viewership is way up year over year. The number is misleading when you realize their first Dynamite back at their regular time drew 883,000 viewers. AEW was supposed to skyrocket once NXT moved to Tuesdays and they’ve gained only 100,000 viewers at the most since then. CM Punk was supposed to be the savior. The guy to push them past Monday Night Raw, even though they’re not actually competing with them. Yet, after his debut, they’ve fallen back into where they were before. Could it be because Tony Khan doesn’t really know how to follow up on impressive debuts? Possibly. CM Punk spent his first few months back having random throwaway matches. His match with Eddie Kingston at Full Gear received a two week build up and one promo. His feud with MJF was great. It’s probably the best feud AEW has ever put on, but what did it really do for MJF? He lost to Wardlow and the reason he’s one of the most talked about talents in the business right now has more to do with his rift or work with Tony Khan and not his rivalry with CM Punk. 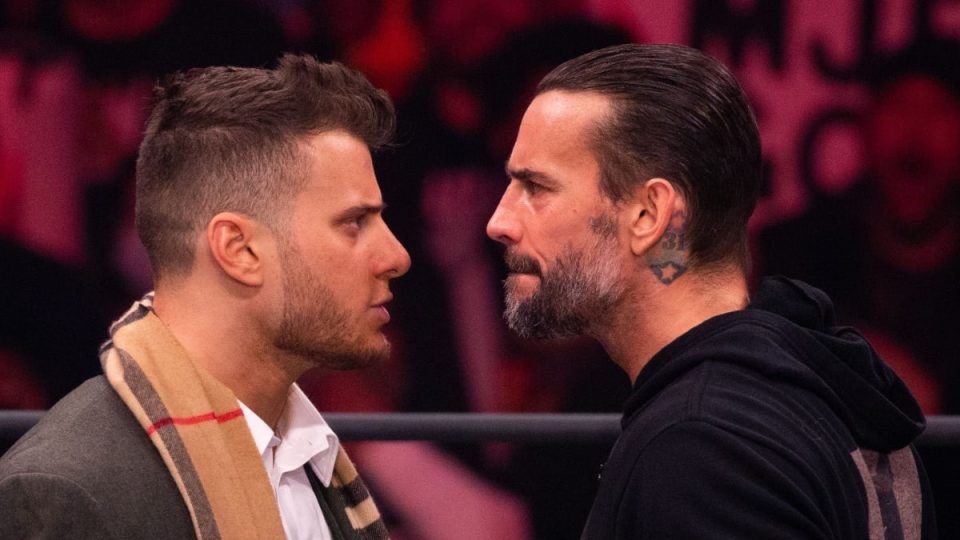 Do I think CM Punk is the biggest financial flop in pro wrestling history, as Eric alluded to? No. There’s obviously interest there, but look at the Double or Nothing 2022 buys with CM Punk and Hangman in the main event. Reports have the buys at around 155,000 buys. That is up from last year’s show, but down compared to AEW Revolution 2022 which did 170,000 buys with Adam Cole and Hangman in the main event. So who’s the bigger draw here? Adam Cole or CM Punk? That’s a legitimate question. It’s CM Punk’s first World Title program since 2013. His first World Title win since he last held it in WWE in early 2013. Yet, it did not surpass the number from Revolution. That should be a telling sign. Yes, his merchandise sells. Santino Marella and Orange Cassidy were also big merchandise sellers. That doesn’t mean they moved the needle, with all due respect to them. It’s not just AEW. His UFC run did tremendous in his first fight with 475,000 buys. A great number that can largely be attributed to Punk. His second fight did 250,000 buys. That means that 225,000 people saw his first fight and said “I’m good” and didn’t order the second.

The common theme is CM Punk seems to be great at drawing initial interest in the product but seems to be unable, whether the fault of him or the promoter, to drum up enough interest to keep those people from going away. Pay Per View numbers have gone up but Punk hasn’t been in the main events of 3 of the 4 Pay Per Views. How much of that success can be given to him or given to the fact that the sheer volume of talent AEW has accumulated should automatically increase the numbers at some point. The only PPV main event he did compete in? The second-lowest of his four Pay Per Views, and it barely beat out Full Gear 2021 at 150,00 buys for the lowest of his four appearances. So yeah, certain analytics and people will spin it and have you believe that the arrival of CM Punk is this massive success.

Tony Khan went on a profanity-laced tirade at the Double or Nothing media scrum about it. At the end of the day, merchandise aside, has CM Punk honestly moved the needle? Has he grown the AEW audience? His numbers as a Main Event guy on Pay-Per-View were down compared to Adam Cole. Rampage has lost 700,000 viewers since his debut. Dynamite has lost 300,000 since the Post All Out episode.

I think CM Punk is a great in-ring performer. One of the best of his generation. When you go back throughout his career, you’ll find that he was never the biggest draw at any point in time. Close to it, yes, but never the biggest. There have been way too many financial flops to accurately say, for me anyway, that CM Punk is the biggest financial flop in the history of the business. However, if you look at the numbers from when he first arrived until now, you can’t with a clear conscience say he’s been a massive success either.

Eric Bischoff has been right. The arrival of The Outsiders forced the WWF to change their strategy and work reactively instead of proactively. CM Punk’s debut in AEW hasn’t forced WWE to do anything. Yes, I think he is an asset. Nobody can say they’d rather not have a guy like CM Punk. Despite Tony Khan’s profanity-laden claims, CM Punk is not this massive success that he would like you to believe.

That’s all for this week. Again, I wish CM Punk a full recovery. Hopefully, he comes back better than ever. My point is this: Watch the viewership over the next few months. If it goes up or stays the same, how much of an impact has Punk really had? Until next time.