Welcome one and all to the latest installment of the NXT Spotlight. As we continue to transition from Brooklyn, we look forward to the return to Full Sail of the Glorious One himself, Bobby Roode, as he will be in the main event tonight against No Way Jose. Let’s see what else the Yellow and Black brand has in story for us tonight. 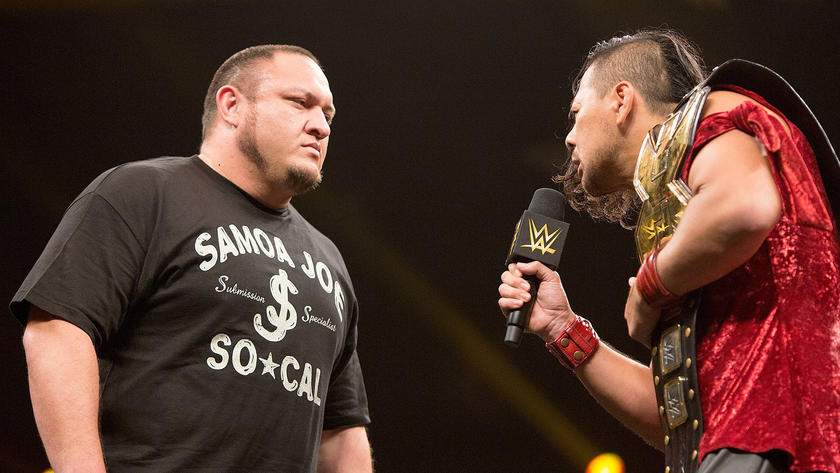 Joe still selling the wounds from Brooklyn against Nakamura. Tom Phillips and Corey Graves say on commentary that Joe is still not medically cleared. Joe says that sometimes when you experience a loss, it makes you look in the mirror and see what you’ve turned into. Joe is a man who understands when he’s wrong and when he’s maybe gone too far and when to admit his mistakes. The entire time he held the NXT Championship, he was a disgrace. In his hunt for the title for over a year, he ran roughshot through everyone. He destroyed friendships. He has regrets in his heart, but he makes no apologies because he wanted to be the champion of the hottest brand in the universe. He wanted to be the standard that NXT is held to and NXT is the best. So as a man, he asks Nakamura to come out so he can have the courtesy to say something to his face. And he’s not leaving until he gets that chance.

After a pause, Nakamura does come out to face Joe. Joe says he asked Nakamura out for a reason. He wants to say things to his face. Some people pop off on social media to get the fans to tune in. He is a man of his word though, and he meant everything he said before their match at Brooklyn. In Brooklyn, they went to war in front of 16,000 people. Again, he meant everything he said and one thing he said was that Nakamura was an undeserving contender. Looking at him now though, he realizes he was not only a deserving contender but a worthy champion. Joe says he has a rematch clause built into his contract and as soon as he is medically cleared, he wants his rematch. Nakamura thinks about it for a little bit and tells Joe he’s on. Joe goes to leave but then comes back to shake Nakamura’s hand. Nakamura is hesitant, but finally does it. Joe thanks him and then leaves.

Nakamura poses for the fans and then gets to the top of the ramp, where Joe comes back and attacks Nakamura. They start brawling at ringside until Joe sends Nakamura into the steel steps. Joe sets up the bottom porton of the stairs and then gives Nakamura a urinagi on top of them. Nakamura is out cold and the refs at ringside throw up the X for effect. Joe yells at Nakamura that, “I did this to you!” Joe walks away as they bring a stretcher out for Nakamura. They really milk this being a serious situation as William Regal and Corey Graves come to check on him and the camera does not leave the entire process. Regal finally walks away with a disgusted look on his face.

Quick Plug:  If you haven’t done so yet, be sure to check out Episode Two of The Match Beyond podcast here at TJRWrestling, Podbean, & Itunes, searching by TJRWrestling. I bring on fellow writers of TJR, Hank and Mark McAllen, for a spirited discussion of the CWC, CM Punk, & Lucha Underground. It really is a great conversation. Give it a listen and let me know what you think!

When we return, William Regal is on the hunt for Joe, but when he gets outside, Joe is already taking off in his vehicle. 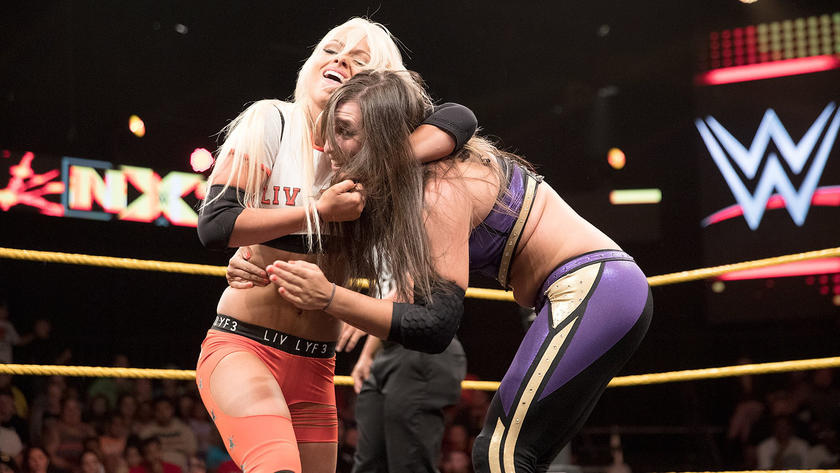 I believe Fazio is Paul Ellering’s daughter. I guess with her dad here, they don’t want to distinguish her with her dad. Makes some sense. For those that may be new to the Spotlight, I hate Liv Morgan so much. I can’t explain it (Besides the fact she’s a Carmella knockoff and I don’t know what’s the point of her), but I can’t stand her. Both women trade counters and holds early. Morgan hiptosses Fazio but Fazio comes back with shoulder thrusts in the corner. Morgan eventually hits a DDT in a front choke position, but then holds on to the choke and Fazio taps out.

Post match, Liv tells Fazio, no offense but you just tapped the hell out. Word on the street is that the women’s division has cleared out and there’s no one left to take on the NXT Women’s champion. But she’s right here and she’s ready to fight. Some might think she has a death wish challenging Asuka, but if she cared what people thought, she wouldn’t be here saying that she wants the NXT Women’s Title. Asuka can try it, cause she’s coming for her. That promo was painful.

Another “Sanity” vignette is shown. 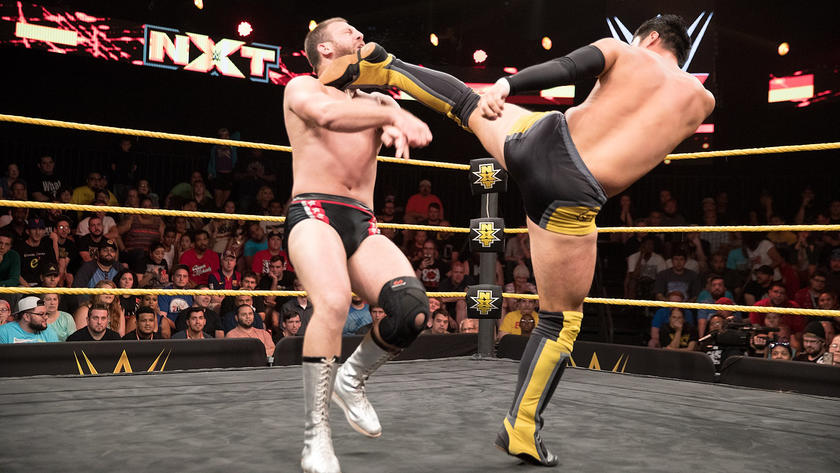 I really enjoyed Gulak’s work in the CWC. Itami is coming off a defining moment at Takeover: Brooklyn when he nailed Austin Aries with the GTS. Neither man can get a feel for the other at the start. They grapple into the ropes but Gulak slaps the ever living hell out of Itami. Itami retaliates and then knees Gulak in the stomach. He follows it with a second one and then a kick to the spine. A kick to the chest and Itami is completely fired up now. I cannot exaggerate how hard Gulak’s slap was. Itami teases a bare knee drop, but ends up just kicking Gulak in the side of the face. Gulak comes off the ropes and is met with a big boot. Itami comes off the ropes and is met with a dropkick. Gulak then bodyslams Itami into the ropes. He goes for a pin but Itami kicks out. Now Gulak works over the body and then focuses on the left leg. He switches to a crossbow submission and then hits a belly to back suplex. Gulak starts smacking Hideo repeatedly, but Hideo starts no selling it and then takes out Gulak with a series of kicks. Hideo hits a back kick that nails Gulak right in the throat. Hesitation dropkick in the corner and now the crowd calls for the GTS and Hideo fulfills their request. Nice little hard hitting match. 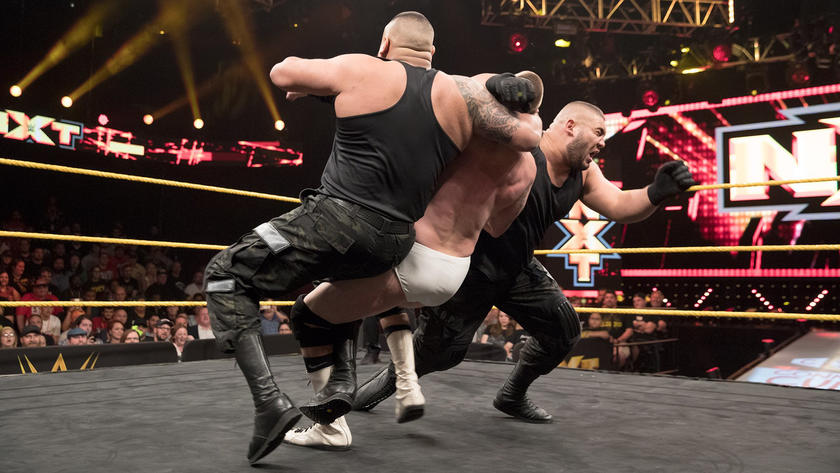 The Authors of Pain (w/Paul Ellering) vs. Doug Sessa and ??

Rezar and Sessa start the match. A back elbow to Sessa and now Akam in the ring. Sessa tries give a couple right hands to AOP, but it does not work obviously. Sessa’s partner, who isn’t named and looks like a bad cosplay of Wade Barrett when he was in Nexus, wants no part of the match but Akam brings him in anyways. He gets powerbombed out of his boots and then AOP set up Sessa for the Russian Leg Sweep/Lariat combo and that’s the match.

Winners: The Authors of Pain

Tye Dillinger is backstage now and is asked about his summer. Dillinger says it’s been an up and down summer starting with his loss to Oney Lorcan but sometimes you need to take a step back to take two steps forward. Things are changing now after his last two wins. He’s not a 9.5 or God forbid a 9, he will always be a Perfect 10. 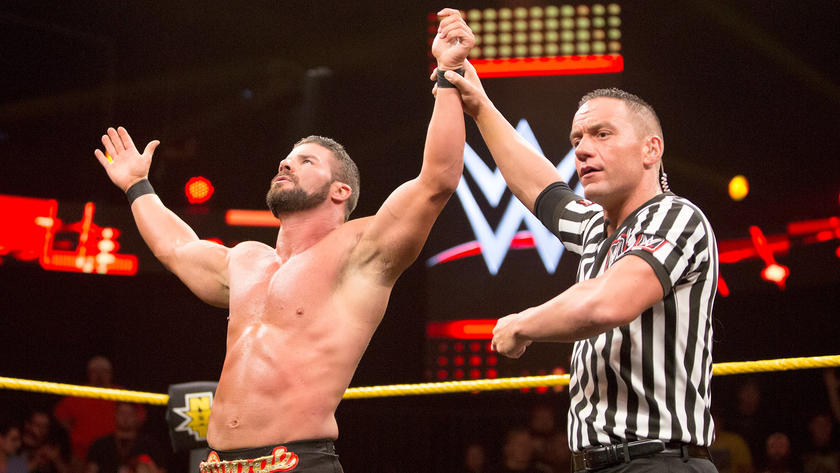 Bobby Roode vs. No Way Jose

It’s a GLORIOUS main event! Roode comes out on a mini spinning platform, not as elaborate as his Brooklyn entrance, but it’s still GLORIOUS. The crowd is of course singing along with the theme song because it’s GLORIOUS. Roode outwrestles Jose to start and deems it GLORIOUS. Which it was. Roode then goes to a side headlock and then knocks down Jose with a shoulder tackle. He tries to hiptoss Jose, but it’s blocked and Jose ends up hiptossing and bodyslamming Roode. Roode cuts him off in the corner though. Jose fights back with some chops and then a back body drop. Jose clotheslines Roode over the top rope. Jose jumps off the apron and nails Roode with an axe handle smash. We go to commercial.

We come back with Jose still in advantage. Roode changes it though with a textbook Spinebuster. The crowd chants that was GLORIOUS. Which it was. Roode works over Jose in the corners and then chokes him over the middle rope, using his five count. Roode gets Jose up in a delayed vertical suplex. He deems it GLORIOUS. Which it was. Jose manages to fight back and hits a cross body block off the ropes. Goes for a pin but Roode kicks out. Roode right back on the attack though. Roode goes for the suplex once more, but this time Jose gets out. Jose lands the right and left punches and then gets Roode up for an Airplain spin into the TKO. He goes for the pin but Roode kicks out. Jose wants to hit his Full Nelson Slam but Roode fights it off. Jose knocks Roode down and goes for his pitcher’s punch, but Roode counters into a rolling neckbreaker. Roode yells now it’s GLORIOUS and he gets Jose up and drops him with an Impaler DDT for the win.

That’s it for this week, so we’ll be back here next week with all the follow up from Joe and Nakamura and hopefully we’ll have some insight on if Team DIY will get a rematch against The Revival. Until next time, don’t forget to check out The Match Beyond podcast and don’t do anything I wouldn’t do. But if you do, name it after me.

February 22, 2021
Welcome back to the TJRwrestling retro reviews where we are...