Welcome one and all to the latest installment of the NXT Spotlight here at TJRWrestling. We’ve had two title matches in the last two weeks, both being outstanding contests, and we wrap up the trifect this week with the NXT Tag Titles. After tonight’s title contest, we should start heading the direction of our Takeover: Brooklyn feuds so let’s get to it!

We start this week with a video package recapping what Tommaso Ciampa said a few weeks back when he explained his turn on Johnny Gargano. Gargano finally returns to NXT tonight.

We then go to footage after NXT last week where Roderick Strong meets with his family after his tough loss to Bobby Roode. 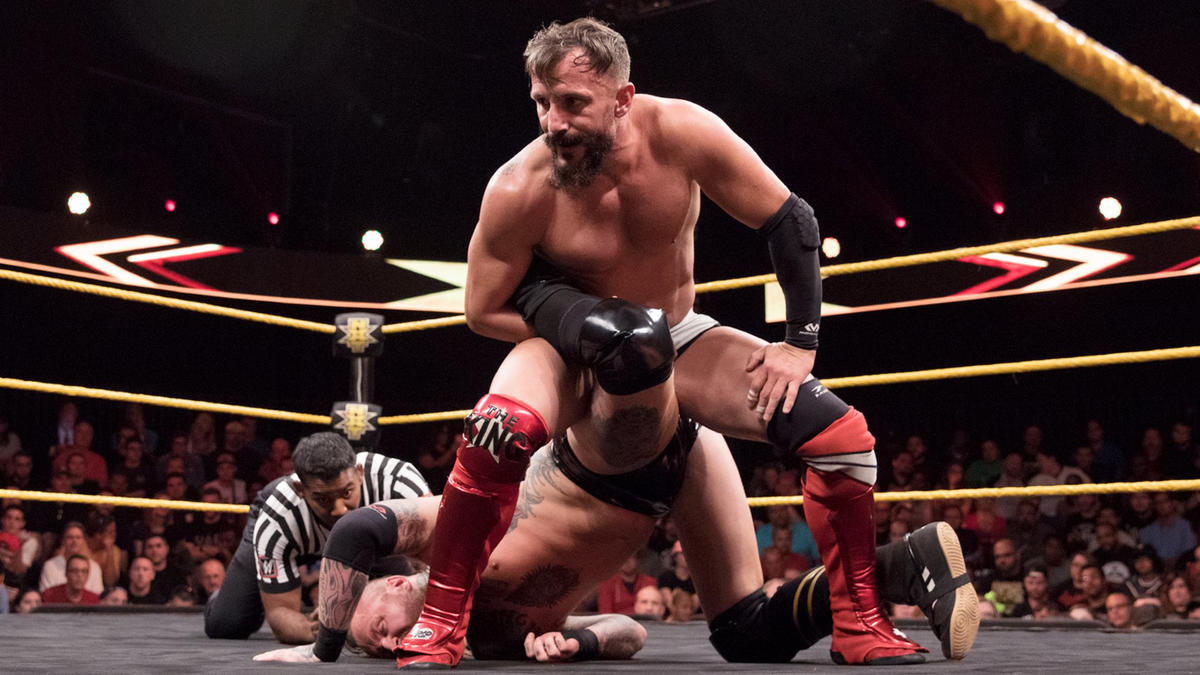 Great to see Bobby Fish in NXT finally. Good reaction for him as one would expect. His theme actually sounds pretty similar to his ROH theme, at least the opening notes. Both men feel each other out with some kicks to the shin. Black then starts things off with a wristlock. A couple counters and then Black turns it into an armbar. After a little back and forth, Fish leapfrogs Black, who comes back and rolls over a bent over Fish and then lands in his seated postion. Fish misses a kick and Black gets up and nails a kick to the midsection. They tie up and Fish goes to the side headlock. Fish hits a couple low kicks and then a boot that sends Black to the ropes. Fish catches a Black kick but then Black comes with a different kick and multiple quick strikes that sends Fish to the floor. Black does his lionsault into a seated position. Fish on the apron gets Black in a sleeper hold and then sweeps the legs out from Black before entering the ring again. We go to commercial.

We return to Fish in control and he sentons over the top rope onto a prone Black. Black kicks out of a pin though. Fish with some quick strikes of his own and then catches Black with a dragonscrew whip. Fish now focuses his attack on that leg. He hooks on a single leg crab that Black is not able to block. Black manages to escape and get back to his feet but Fish goes back to the sleeper hold. Black rams him into the turnbuckles twice and manages to escape but runs into a big boot. Fish though ends up walking right into a high knee himself. Black goes to the corner to grab Fish but gets caught in an exploder suplex into the turnbuckles. Fish starts taunting Black and Black makes his comeback. Big kicks to the sternum and then a forearm in the corner. Black lands a lionsault and then a massive jumping knee strike. Black proceeds to pick up Fish with his foot and then it’s Black Mass time and Fish’s head lands in the third row.

K-Tank’s Take: Fish looked good in his outing and it’s always great for NXT to get a talent like him. His partner Kyle O’Reilley isn’t too far behind. That Black Mass kick is a sight to see every time. I love it. It’d be good to get him a storyline though.

We get a recap of the Sanity vs. Itami/Ohno tag match last week that Sanity won. We go to footage backstage after the match where Ohno and Itami argue about what happened. Itami says they lost because of Ohno. Ohno says all that Itami has done since Takeover: Chicago is blame other people. He’s tried to help Itami but he’s done talking now.

We get a vignette for a new tag team on the horizon, The Street Profits.

We then go to two weeks ago as The Velveteen Dream was leaving the arena. He was attempted to be interviewed but he says he’s not like other superstars and that’s not the time or place to learn more about him. 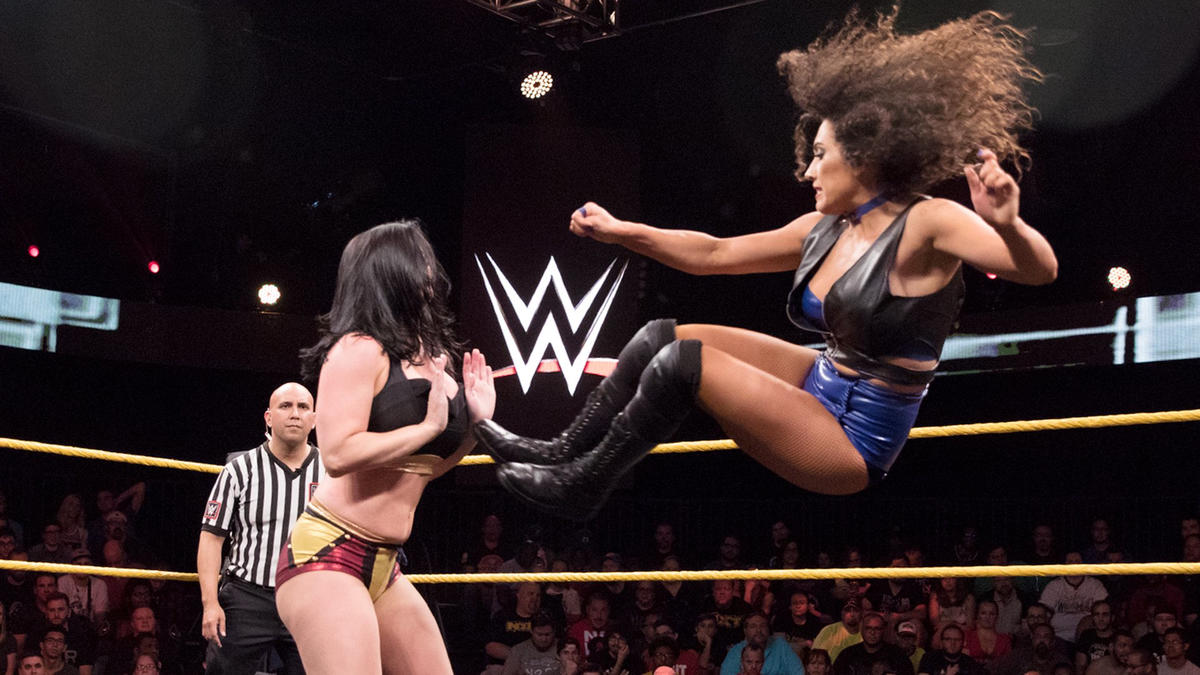 I do not know anything about either woman, so I apologize. Mauro lets us know that Vanessa was a former dancer for the Phoenix Suns and Arizona Cardinals. Hachey hits Borne with a shoulder tackle. Borne leapfrogs Hachey and then kicks her in the spine. Hachey comes back with a backbreaker but Borne is able to kick out of a pin. Hachey then goes for a submission but Borne escapes and then hits a series of double chops and then a dropkick that didnt get much height. Borne then connects with a spinning back suplex and that gets her in the Classic.

K-Tank’s Take: Obviously not much to this. Nothing impressive.

We see footage after last week’s show where Alexander Wolfe and Killian Dain attacked Drew McIntyre in the parking lot. Wolfe says that McIntyre’s time is running out.

We then go to Bobby Roode inside of William Regal’s office. Regal brings to Roode’s attention that both McIntyre and Dain are undefeated and both want the NXT Title. Roode says the NXT Universe pays to see Roode in action but we all know that he would beat both of them. He’s a businessman though so why don’t we just have McIntyre vs. Dain and the winner gets Roode. Regal says that’s a match that would interest a lot of people and so next week that match will happen and the winner of the match will take on Roode at Takeover: Brooklyn. 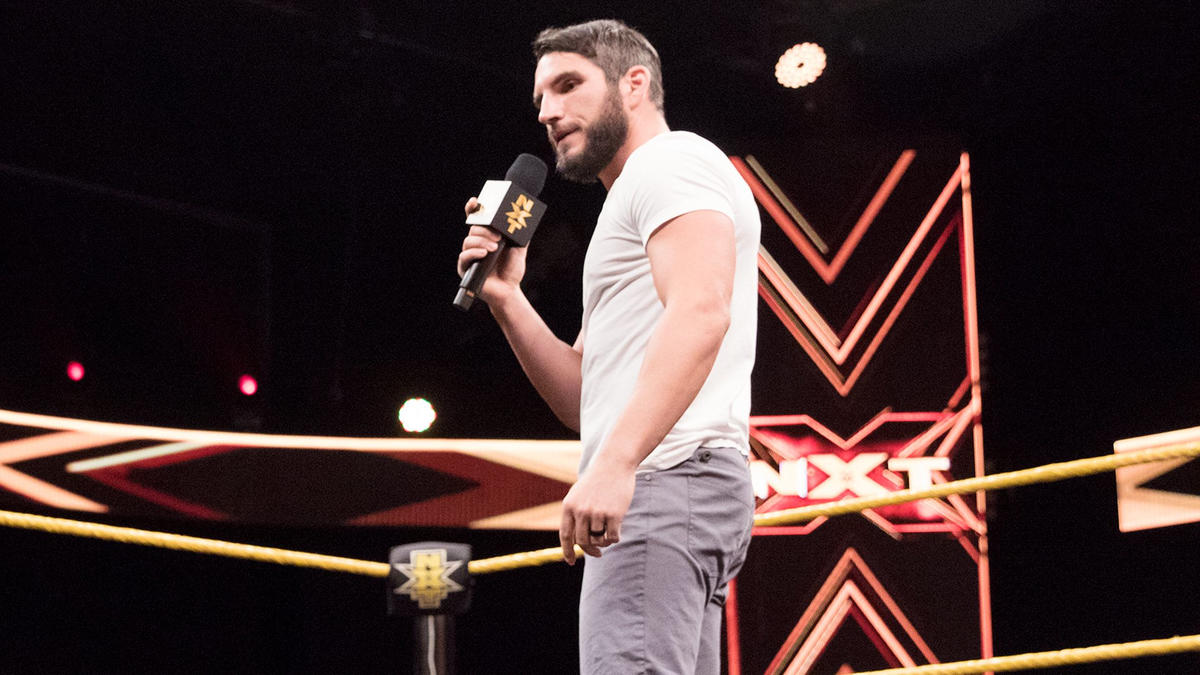 The Other Half Returns

Johnny Gargano returns to Full Sail with the old DIY video and theme. He looks rather emotional as he slowly makes his way to the ring. The crowd serenades him with “Johnny Wrestling” chants. He lets them know that he’s missed that. He says that and this ring are irreplaceable, so thank you. Gargano says that we all saw what happened in Chicago and just like the fans, he never saw it coming. He never thought the guy that he would take a bullet for, would be the one to pull the trigger on him. He keeps asking why and he just doesn’t understand. He doesn’t think he ever will either. He’s not here for the past though, he’s here to move on into the future. Sometimes you can’t control things but what matters is how you react to those things in life. He needs to be back in the ring and doin what’s important to him. Takeover: Brooklyn is the biggest show of the year and he has to be on it. He needs to be Johnny Gargano again and more importantly, he needs to be Johnny Wrestling.

K-Tank’s Take: Not as much to that promo as I hoped for. Short and to the point. Obviously Ciampa’s injury completely changed everything about that angle, so it’s understandable. Gargano had new theme music for his exit, so not sure why he came out to DIY’s theme. 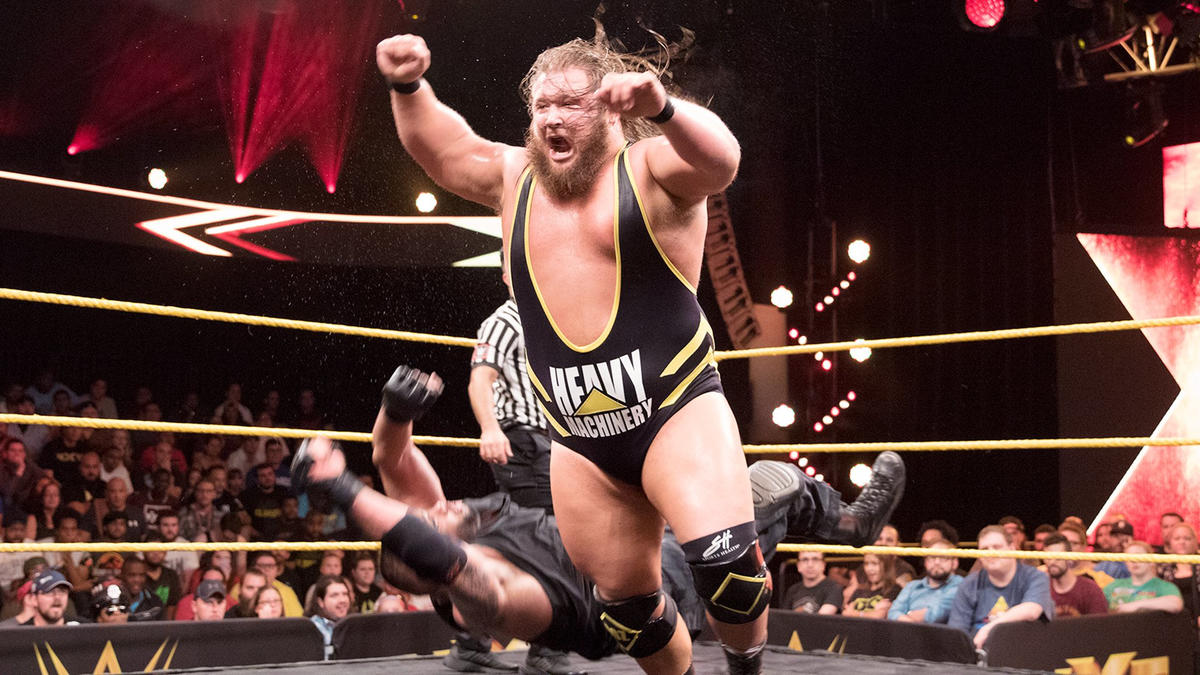 Only 11 minutes left in the show after the introductions. Tucker Knight and Akam start the match. They tie up, sort of, and then Knight gets a go behind. Akam goes to the ropes and then connects with a back elbow. Knight ends up getting Akam in the corner and hits a couple splashes but Akam blocks a third one and tags in Rezar. Otis Dozovic gets the tag too and he and Rezar go face to face. Rezar comes off the ropes with a clothesline but Dozovic doesn’t budge. Both men trade shots and then Rezar comes off the ropes and is crushed with a body splash that sends him down to the mat. Knight and Akam join their partners for a staredown between the teams as we go to commercial.

We come back to Akam in control of Knight. We see that during the break, Rezar low bridged Knight that sent him hard to the floor. Akam tags in Rezar and he works over the head and neck of Knight, much as Akam was doing when we returned from commercial. Rezar then just starts to pound on Knight relentlessly. Akam now tags back in and Knight tries to fight back but Akam lays him out with a knee strike. Rezar then tags back in and goes back to the neck. Knight has to fight out of AOP’s corner but Akam makes a blind tag and AOP end up hitting a double team side slam. Akam with a pin but Knight kicks out. Another knee strike to the side of the head and Rezar makes a quick tag back in. Rezar toys with Knight a bit with some kicks to the side of the head. Rezar comes off the ropes and Knight manages a huge clothesline to stop the momentum. Both guys make the tag and Dozovic comes in and runs over Akam. Rezar back in and Dozovic connects with a massive overhead belly to belly. Knight sends Rezar to the floor while Dozovic hits a World’s Strongest Slam. He then picks up Knight in a bodyslam and drops him over Akam. Dozovic now set up for the Piggy Back Slam but Rezar comes in and breaks that up. AOP end up connecting with The Last Chapter on Dozovic and that’s it.

Post match, as AOP celebrates, Sanity minus Eric Young comes out and stare down AOP. Sheets of paper start falling from the sky and Mauro makes the connection that it could be a signal from Sanity that they’re taking pages out of the Book of Dominance that Paul Ellering has been reading from for his men.  That ends our show as AOP is not happy about Sanity’s appearance.

K-Tank’s Take: Not much of a showing for Heavy Machinery. I would’ve liked to have seen them get a legit chance against AOP, but it wasn’t meant to be. It’s not all bad news though as it appears Sanity will finally be in some sort of title program. This could be some serious fun to watch.

That’s it for this week. I’ll be back next week with our #1 contender’s match and also Ember Moon vs. Ruby Riot. Until next time, don’t do anything I wouldn’t do… but if you do, name it after me.