Welcome one and all to the latest installment of the NXT Spotlight here at TJRWrestling. The calendar has officially hit May, which means we are just weeks away now from our next Takeover event in Chicago. Tonight we find out our first title match for that show as we will determine Asuka’s new #1 Contender. Hideo Itami also returns to action so let’s get to it! 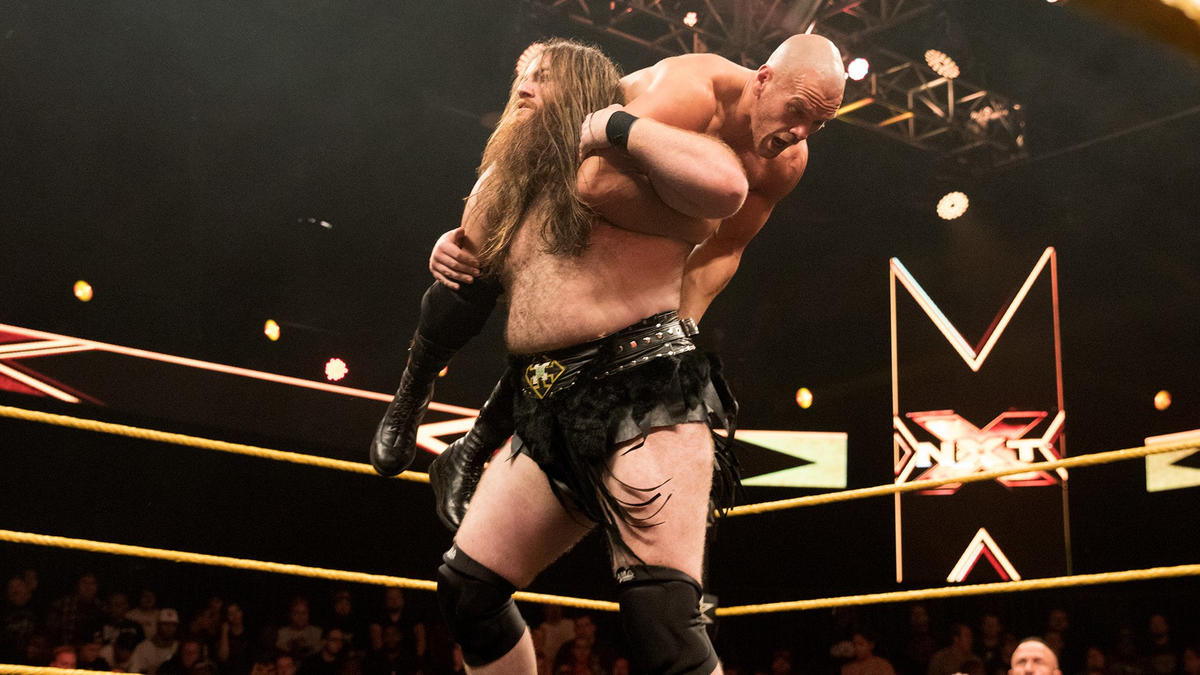 Burch comes out firing but makes a mistake by going to the second rope and Dain sweeps his leg out from under him and he takes a hard fall to the mat. Dain begins to overpower Burch and then drops him with Wasteland, followed by a senton splash. Dain then drops a quartet of elbow drops. Burch avoids a charging Dain and then goes back to the second rope and this time connects with a dropkick. He headbutts Dain and then unleashes a few shots but as he goes to the opposite side of the ring, Dain drills him with a shotgun dropkick. He gets Burch up for the Ulster Plantation and that’s the match.

We get a vignette for Patrick Clark and apparently he will now be known as The Velveteen Dream. 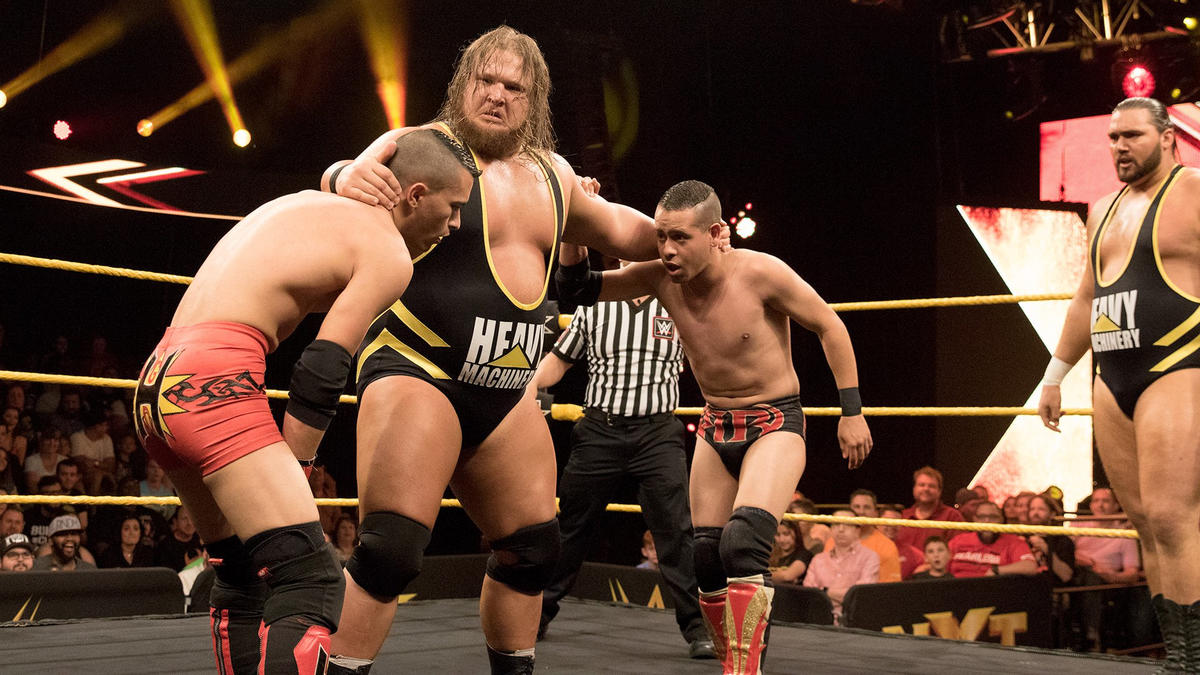 Watts and Kunsman combined don’t weight as much as one member of Heavy Machinery. So I don’t like their chances tonight. Otis Dozovich and Kunsman start the match. Otis splashes Kunsman to start and then does a deadlift suplex before tagging in Tucker Knight. They do a double headbutt on Kunsman and then Knight throws Watts into the ring and then they proceed to belly bump his head. Knight connects with a double underhook suplex on Watts and then does an avalanche splash to both men in the corner. Otis gets tagged in and picks up both men at the same time for a bodyslam and here comes Knight for the piggyback splash and their opponents go splat.

Post match, Heavy Machinery gets some microphones and talk about what they like to do. They like to hit a couple buffets in between weight sessions. Steaks and weights as they say. That starts a “steaks and weights” chant and a t-shirt was born. They say they have a hunger for the biggest challenge they can come across and they want Authors of Pain. AOP has never faced anything like Heavy Machinery before. They have a real hunger and it’s time to eat. That was a fun promo, good on them to maximize their minutes. 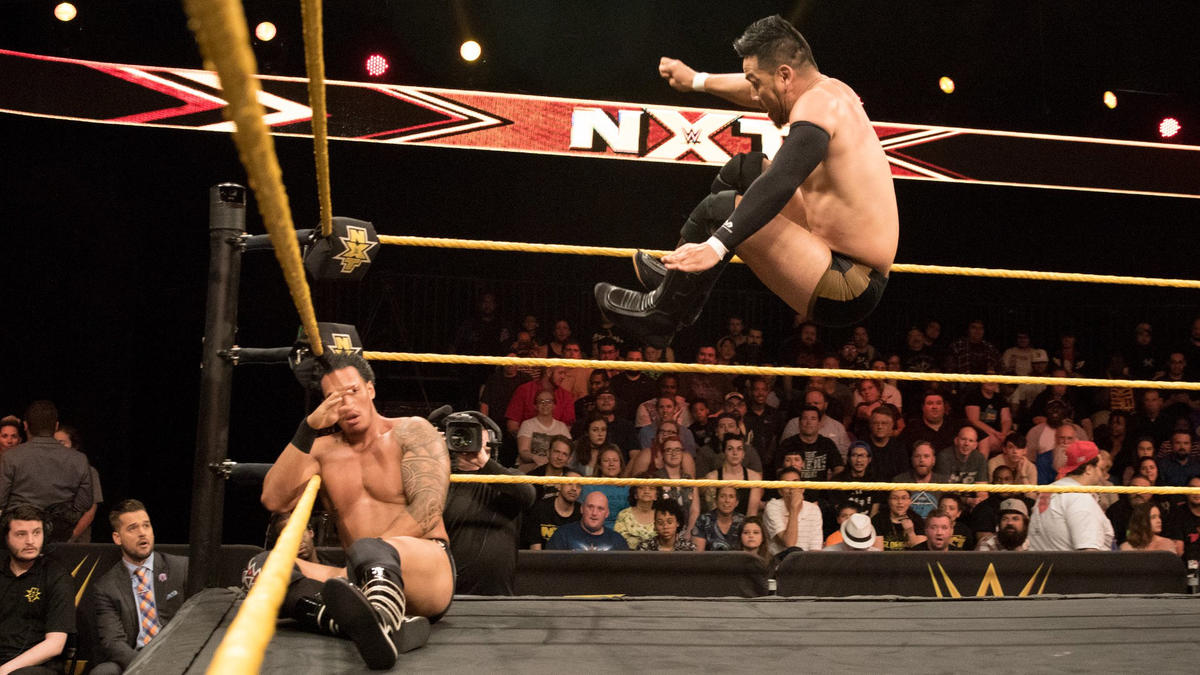 Reeves attacks Itami before the bell rings as he poses on the turnbuckle. We earlier saw Bobby Roode talking to Reeves backstage and the story is that Roode got in Reeves’ ear. The ref confirms Itami can start the match. Reeves charges Itami again but Itami moves. Itami can’t follow up though and Reeves stays on the offense. Reeves spends a good amount of time trash talking and mocking Itami and Itami finally has enough and he smacks the hell out of him. Itami comes in with a couple clotheslines and kicks. Reeves is in the corner and Itami continues to unload with kicks and then comes with a hestiation dropkick in the corner. The crowd chants for a GTS and Itami obliges and picks up the win.

We now go to a video package hyping up Drew McIntyre.

After that is part two of “Who is Roderick Strong?” We see footage of him with his fiancee as they prepare for the birth of their first child. His fiancee is one of the MMA version of The Four Horsewomen with Ronda Rousey. We see some footage of his early days wrestling in IPW. We then see footage of his tryout at the Performance Center along with some still photos of his time in Ring of Honor where we was at for 13 years and became “Mr. Ring of Honor”. There’s a great moment where he gets emotional and says that if he could go back and tell himself anything as a child, it’s to not be afraid. They were able to incorporate some new footage and photos of the birth of his child. He says for the first time in his life, he gets to do something for his family. What an amazing couple of video packages.

William Regal is backstage and he wants to go over who will take on Roode at Takeover: Chicago. Roode says that Takeover: Orlando was the most watched NXT show and it’s become of him. Roode says they need to protect the face of the company, which is his face. He says Hideo Itami is reckless and dangerous for everyone. Regal asks if Roode thinks Itami needs to earn his shot against Roode? Roode agrees. Regal says he’s also been impressed with Roddy Strong and so next week it’ll be Roddy Strong vs. Hideo Itami for the #1 contendership at Takeover: Chicago. At that moment, Roddy comes into Regal’s office and Regal acknowledges it’s time for Roode to leave. 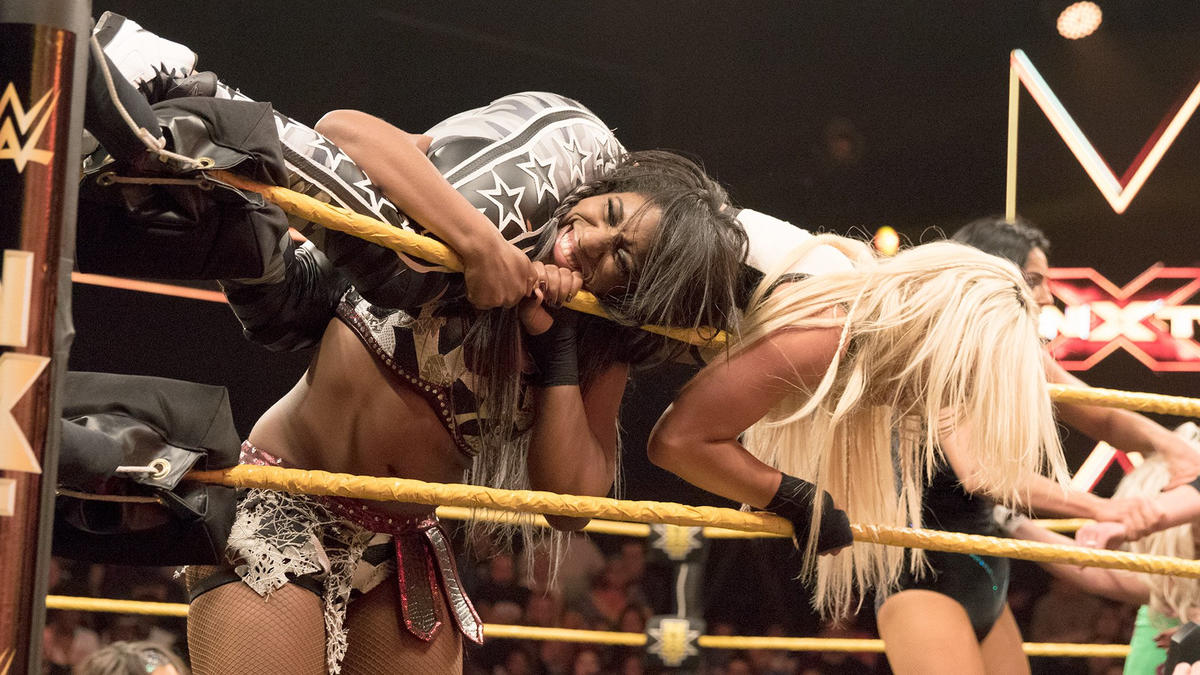 Women’s Battle Royal for the #1 Contendership

So we have Billie Kay & Peyton Royce, Aliyah, Nikki Cross, Ruby Riot, Ember Moon, Liv Morgan, Lacey Evans who was Marcy Estrada, Sonya Deville who was Daria from Tough Enough, and then a bunch of random women. They didn’t get entrances as there was a commercial break in between the entrances. Two of them are Candice LaRae who is Johnny Gargano’s wife in real life and another is Rachel Ellering who is of course the daughter of Paul Ellering and has done a couple spot appearances on NXT before. There’s four others that I have no idea about. I’ll just highlight the main spots here as of course a battle royal is pretty hard to recap since it’s nothing more than punches, kicks, and attempted eliminations. Just saw Sarah Bridges in this match as well, she was Crazy Mary Dobson in the indies. I liked her work a lot. We go to commercial before any eliminations take place.

During the commercial break we find out that Billie and Peyton eliminated someone named Victoria Gonzalez. Then live, they both eliminate someone named Bianca Blair. Aliyah eliminates Rachel Ellering who apparently is going by Rachel Evers now so there’s no connection with her dad. Liv Morgan dropkicks Sarah Bridges on the apron and she is eliminated now. Immediately after that, Sonya Deville and Lacey Evans are eliminated by Billie and Peyton. Ruby Riot does a hurricanrana in the ring that sends Kimber Lee out of the ring. So she was in the match too apparently. I didn’t see her at the beginning. Candice LaRae gets eliminated by a Billie big boot and that draws a big boo from the crowd. We’re down to Aliyah, Nikki, Billie, Peyton, Liv, Ember, & Ruby. As I say that, Nikki eliminates Aliyah. She then follows that up a couple minutes later by eliminating Liv Morgan. Thank God. Billie and Peyton double team on Ember Moon but Billie gets caught up in the ropes and ends up in the apron which allows Ember to superkick her to the floor. That gets a great reaction. Now Peyton tries to avenge her friend but Ember gets her in a suplex position and drags her over the top rope and Peyton eventually falls to the floor.

We are down to Ember, Nikki, & Ruby now. Nikki charges Ruby and they brawl. Nikki gets up and gets dropkicked by Ember. Nikki gets Ember in the corner and tries to eliminate her. Ruby comes from behind though and hits a double knees in the corner on Nikki. Ember then takes out Ruby and climbs to the top rope and gives Nikki The Eclipse. Ember unleashes a trio of nice kicks on Ruby and then gets her in the corner for her handspring elbow. She goes to the top for an Eclipse again but here comes Asuka! Asuka throws Ember off the top back into the ring as the refs ring the bell. Asuka throws Ember into the corner and I don’t know if Ember just completely misses the turnpost for the standard shoulder spot or if she was trying something else but she goes sailing basically into the guardrail and lands on her shoulder hard. Back in the ring, Asuka takes out Ruby and Nikki with some kicks and yells out that no one is ready for Asuka. Asuka looks really proud of herself as she assesses the damage she’s done. She runs back to the back as we take a look at all three women laid out. Ember is clearly in a lot of pain.

William Regal now walks out and says that Asuka will have to defend her title against all three of the women she took out in a Fatal Four Way. That ends our show.

Next week I will be out of the country so I won’t be able to recap NXT. I’ll have someone fill in for me and worst case scenario, NXT will just be a couple days late if I have to do it myself. That Itami vs. Strong match should be simply fantastic. Until next time though, don’t do anything I wouldn’t do. If you do, name it after me.

May 27, 2016
Dixie Carter, President of TNA Wrestling, was recently interviewed by...

March 2, 2017
The road to WrestleMania continues today as I look back...