Welcome one and all to the latest installment of the NXT Spotlight here at TJRWrestling. Tonight’s episode revolves around a huge NXT Title Match as Bobby Roode defends his title against Kassius Ohno, in Ohno’s first official match back in NXT. The stakes are even bigger as the winner will meet up with Shinsuke Nakamura in Orlando for Takeover during WrestleMania weekend. Let’s get to it! 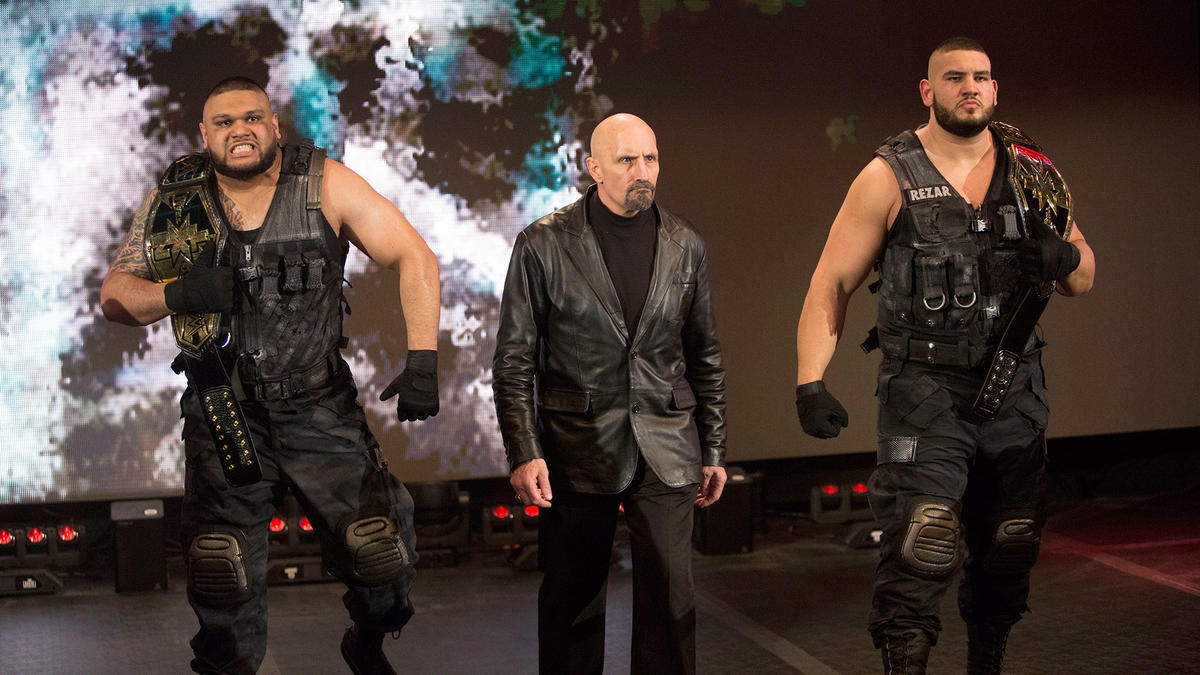 The Ealy Brothers vs. The Authors of Pain (w/Paul Ellering)

I have no earthly idea how to tell the Ealy’s apart, so you’ll have to bare with me. Rezar and Gabriel (according to Tom Phillips) start. A quick tag to his brother Murial and he strikes Rezar with a big kick but Rezar barely flinches and destroys Murial with a lariat. He then goes to Gabriel and hits him off the apron. The AOP then get both Ealy’s and set them up for the Super Collider, which they hit pretty sloppily. They then set up one of the Ealy’s, I already lost track of them, for The Final Chapter and that’s it already.

Winners: The Authors of Pain

Post match, Paul Ellering tells The Revival that they’re the next name in their book of destruction. They claim to be the best tag team in the world. However, he’s the one that created the formula for tag team wrestling and The Authors of Pain are soon to be a dynesty. Now hits DIY’s music who come out to the ring. Ciampa mocks Ellering’s use of vocabulary and then Gargano says that everyone knows that if one team can defeat AOP, it’s DIY. Everyone knows that The Revival saved them from losing the titles back to DIY. They want a fair title rematch. Now here comes the final piece of the trifecta as The Revival comes out. Dash talks about how they sat on the sidelines in San Antonio and had to watch AOP win the titles that they should’ve never lost. There are three things you don’t do in sports, you don’t bench Tom Brady, you don’t pull MJ in the 4th quarter, and you don’t have The Revival watch the tag team division from the sidelines. Dawson then confirms to Ellering that they are in fact the greatest tag team in the world. If that wasn’t enough, here comes William Regal now who surveys the situation and comes to the easy conclusion of making a Triple Threat Tag Title Elimination match at Takeover: Orlando.

A video package for Asuka is shown as they hype her title defense against Ember Moon at Takeover: Orlando. 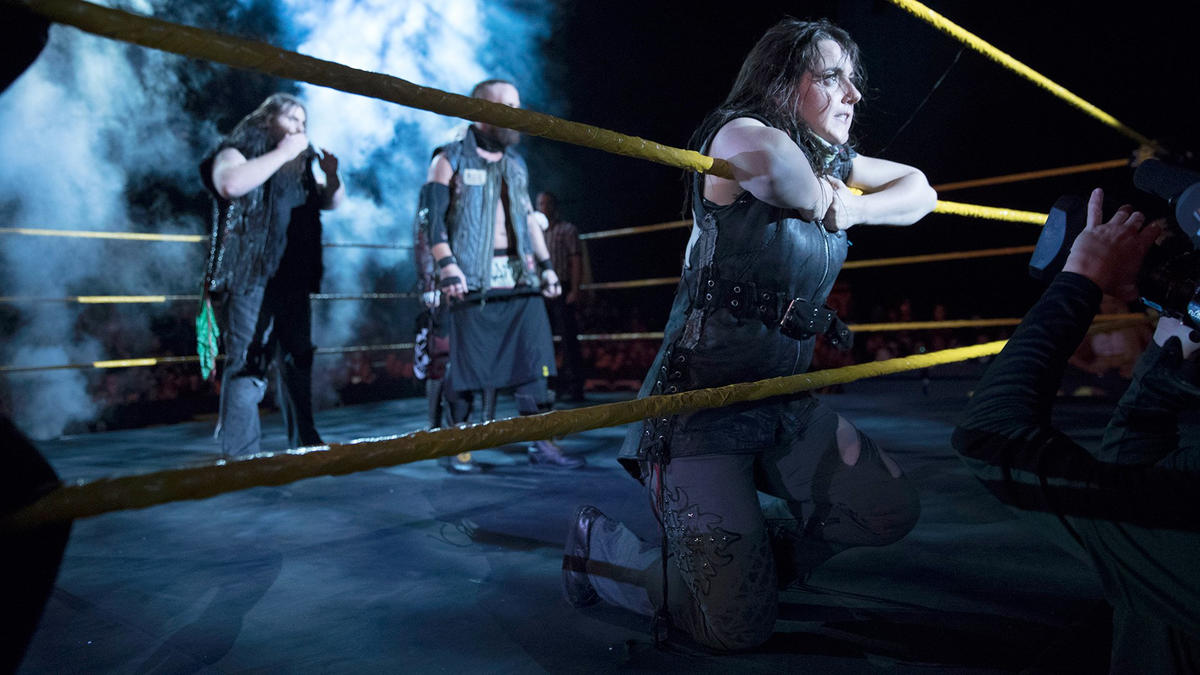 Oh Nikki, how I’ve missed you! I know nothing about Estrella. She’s very built and seems to be in somewhat of the 1950’s Cherry gimmick back when Deuce and Domino were a thing. All of Sanity comes out with Nikki. Nikki comes right after Macey when the bell rings and nails some stiff forearms. Then she grabs her by the ponytail and just swings her down to the mat. Macey gets up and delivers a straight right hand, a pretty solid shot too, but that just fires up Nikki more. Nikki gets her in a Fisherman’s Suplex but instead turns it into a spinning neckbreaker. She does it a second time as EY yells at her from ringside that she knows what to do. Nikki ends up connecting with the move six times before finally mounting her for the pin and it’s over.

As soon as the match ends, Tye Dillinger and No Way Jose come out and try to ambush Sanity. The numbers game immediately get to them though and Killian Dain destroys Dillinger as Alexander Wolfe hits Jose with a release German suplex. The other members of Sanity hold up Dillinger to make him watch EY give Jose the Wheelbarrow neckbreaker. Dain hits a running senton on Dillinger after that and EY yells at him that the blood is on his hands.

Quick Plug: Be sure to check out a special edition of The Match Beyond podcast that dropped this week. I have the pleasure of interviewing Conrad Thompson, who is the host of Something to Wrestle With and What Happened When, the two hottest podcasts going right now. This is a real fun conversation going behind the scenes to see how these podcasts come to be the way they are.

A vignette is shown to hype the debut of Aleister Black. Both vignettes so far have been very cool and I’m interested to see how it portrays on camera.

We go to a recap of last week when Billie Kay was injured by Ember Moon’s Total Eclipse. Pretty sure this is all storyline. We go to the Performance Center where they’re looking for an update on Billie’s condition and we end up seeing a confrontation between Oney Lorcan and Andrade Almas. Almas was trying to pick on HoHo Lun until Lorcan got involved. We then go to comments from Lorcan who says he can’t stand a bully and that’s why he got involved.

That leads us to find out that next week we will have Almas vs. Lorcan and we will also have a six-man tag between Sanity and Strong/Dillinger/Jose.

We now go to Kassius Ohno who’s on his way to the title match. He says he feels good heading into the match and he’s going to bring the NXT Title back with him and then we can talk about success and failure. 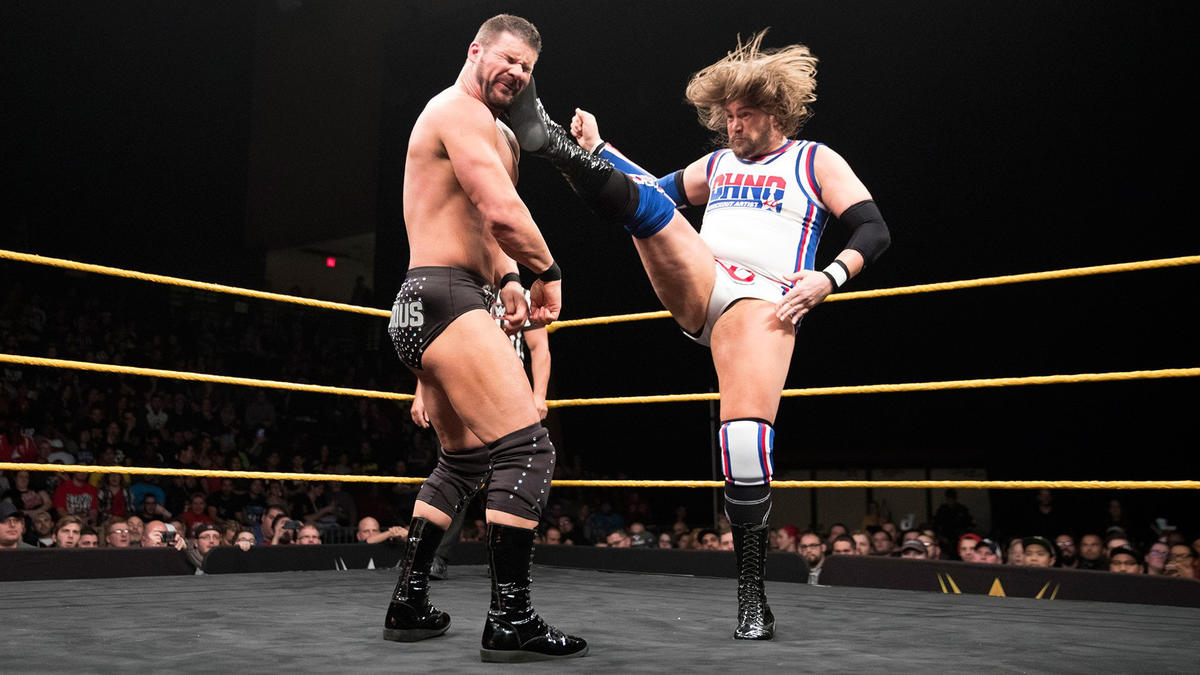 Props on the Ohno ring gear, it’s Dream Team 1992 inspired. Before Roode comes out, we get some pre match comments from him as well. He says Ohno doesn’t deserve a title shot. He’s not going to make a name on the behalf of Roode. He’s going out there to prove to everyone why this is his NXT. We go to commercial during Roode’s entrance.

We return to see the big match introductions for this match and are also shown Nakamura watching backstage on a monitor. 19 minutes left in the show as the bell rings. Ohno goes for a quick rollup as soon as the bell rings and Roode kicks out. Ohno turns it into a trio of pin attempts but Roode kicks out. Roode is still flustered though and goes to the outside to regroup. Ohno drops Roode with a tackle and then a bicycle kick. They go to the corner and both men exchange chops. Ohno catches Roode for a back body drop and then clotheslines him over the top rope. We go to another commecial.

We come back to Roode catching Ohno with a boot and then clotheslines him in the back of the head to finally get the advantage. Roode dominates the next few minutes of the match with a series of punches, kicks, and clotheslines. He goes up to the second rope and comes down with a forearm smash. He tries a couple pins but Ohno kicks out. Ohno connects with a desperation right hand that stuns Roode but Roode comes back with a series of elbows to get back in control. Ohno hits a jaw jacker to try and stop Roode. Roode sends Ohno to the ropes and he flips over them to the apron. Roode charges and gets met with a big boot. Roode reverses a charge into the turnbuckles and turns the momentum on Ohno, who takes a big bump over the top turnbuckle to the floor and we go to yet another commercial.

We return to Booby Roode in control, pulling on Ohno’s arms in a seated surfboard position. Roode goes for a suplex but Ohno reverses it and Roode does a full somersault in the air as Onho releases him. Ohno fires up and then hits a seated dropkick. He hits a splash in the corner and then connects with a spinning bicycle kick but Roode somehow kicks out. Ohno goes for a running senton but Roode gets his knees up and then connects with a backstabber right after that. Ohno kicks out of a pin. Roode charges Ohno again but Ohno connects with a third bicycle kick. Ohno gets Roode in the corner and hits a reverse blockbuster off the second rope, but Roode once again kicks out. Ohno goes for his Roaring Elbow but Roode catches him in a spinebuster instead. Ohno kicks out once more. Roode wants the Glorious DDT but Ohno counters and nails Roode with the Roaring Elbow but Roode ends up on the floor from the momentum. Ohno goes after him and brings him back in the ring and lands a senton splash for good measure but again Roode still is able to kick out. Ohno now takes off his sleeve and wants to him the elbow again but Roode drags him to the ropes and Ohno ends up getting clotheslined by the top rope. Roode uses the opening to go for the Glorious DDT and that’s enough to win.

That’s it for this week, so I’ll be back next week for all the action as we get closer to WrestleMania weekend. Until next time, don’t do anything I wouldn’t do… but if you do, name it after me.