Welcome one and all to another installment of the NXT Spotlight here at TJRWrestling. We are rapidly approaching what should be a fantastic Takeover: Toronto event and tonight we’re starting the second round of the Dusty Rhodes Tag Team Classic. Let’s see who advances tonight and what other storyline advancement we have.

We start the show by going to Charly backstage who tells us that we will get action from all 4 second round matches tonight. She sets the stage for all the matches and says we’re starting with an exclusive match from San Jose, California this past week when NXT was on tour. 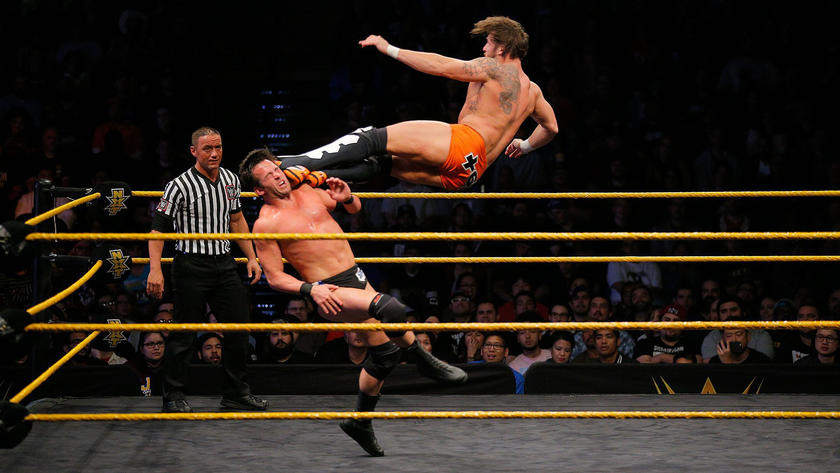 Aries arrives in street clothes, as for those that don’t know, he took a vicious kick from Nakamura that ended up fracturing his orbital bone. If you haven’t seen the graphic photo Aries posted, it is brutal. He had surgery today as I write this, so definitely wish him all the best.

Since we’re not in Full Sail, it’s interesting to hear the crowd reactions, which were huge for Strong and Aries, and very minimal for TM61. Aries grabs a mic and says that he senses everyone’s disappoint since he’s not dressed to compete. Aries describes his injury and takes off his sunglasses and it still does not look good. Aries says he’s too valuable a commodity to risk permanent damage. He proposes to TM61 that everyone knows they would’ve lost to Aries and Strong tonight. So do the smart thing and forfeit the match tonight and let them advance. They’ll save the embarrassment of letting Strong beat them one on two.

William Regal comes out now and says he confirmed Aries cannot compete. He makes an offer to TM61 that says one of them can face Strong one on one and the winner will allow his team to advance. TM61 agrees and it’s going to be Shane Thorne vs. Roderick Strong. They start right away with the crowd solidly behind Roddy. Both men with a lot of counters and holds early until Thorne hits a heel kick on Strong. He drops Roddy with a back elbow and then a standing moonsault but only gets a two count. Thorne goes to the top rope but Aries distracts him and Roddy ends up kicking him down. Roddy gets Thorne up in a backbreaker from a second rope and then drops him right over the top rope. We go to commercial.

We come back to Roddy in advantage but runs into a kick from Thorne in the corner. Thorne then hits a picture perfect, Bob Holly level, dropkick. Both men start trading blows, which Thorne ends up with the advantage. Roddy catches him in the corner though and drops him in a modified backbreaker that gets a two count. The Messiah of the Backbreaker in full effect tonight. Roddy gets Thorne on the top rope now, but Thorne hits him down in the position for Alberto Del Rio’s double foot stomp, which of course leads the crowd to chant Si! Roddy fires back though and ends up dropping Thorne face first with a slam, but only gets a two count on the pin. Thorne counters back with a huge clothesline that turns Roddy inside out and then follows that with a Falcon Arrow. Roddy kicks out so Thorne drops him with a sitout powerbomb. He goes for a pin but Aries distracts the ref. Both men get up and Roddy hits a jumping knee strike to the head but Thorne manages to kick out. Nick Miller and Aries start arguing at ringside, Roddy gives Miller a wrecking ball dropkick but that distraction allows Thorne to get Roddy in a small package and he gets a 3 count! 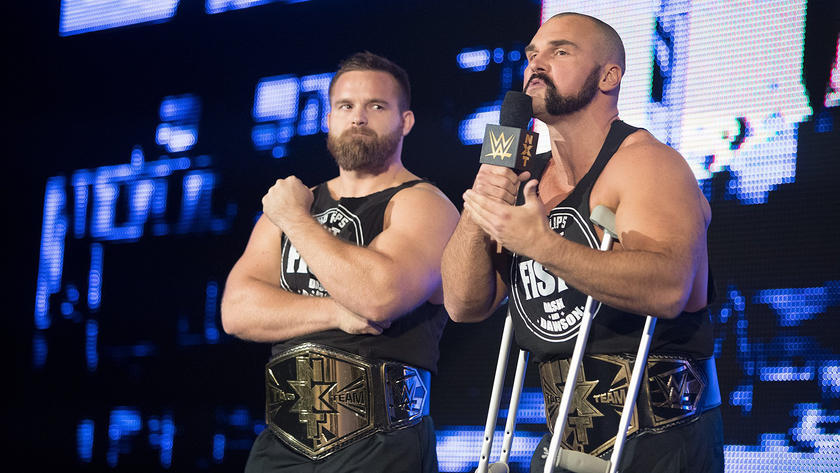 We are back in Full Sail for this match. The Revival come out last but not in ring gear and Scott Dawson is on crutches. They have mics and say that they just got off the phone with WWE doctors and Dawson has, “a strained ACL, sprained MCL, torn labrum and broke his meniscus in half.” That made me laugh. Dawson says he tried to tell the doctor that he can push through the pain and beat #DIY and win the Classic. The doctors told him that his career could be over if he tried that though. So The Revival are unfortunately going to have to pull out of the Tag Team Classic. Dash grabs the mic and says DIY is getting a free pass and they are being saved from the embarrassment from losing to The Revival once again like in Brooklyn. Top Guys Out.

Winners by forfeit: #DIY advances to the semifinals

Cedric Alexander is now backstage with Dasha. He’s asked about his NXT Experience. he says its a learning experience. Andrade Almas sent him a lesson that you can’t just be happy to be here. You have to have a mean streak so he’s challenging Almas any time, any place.

There’s a very brief vignette where the Full Sail crowd is chanting NXT and then the lights go out and then the screen says, “The Return”. I’m not sure what that means. Very interesting.

#DIY is backstage now and not happy with the result they just got. They’re not surprised by The Revival. It just reminds them of their original goal which is to win the Tag Team Classic and then they’re going to become the new NXT Tag Team Champions. Top Guys Out.

Quick Plug: Be sure to check out this week’s edition of The Match Beyond Podcast as I welcome RD Reynolds on the show. RD runs the greatness of Wrestlecrap.com. We talk about where his site idea came from, how did it spawn three books, and what constitutes Wrestlecrap nowadays. We also talk in depth about his latest book, The Death of WCW and how much it depressed him. This is a really fun conversation that you don’t want to miss. 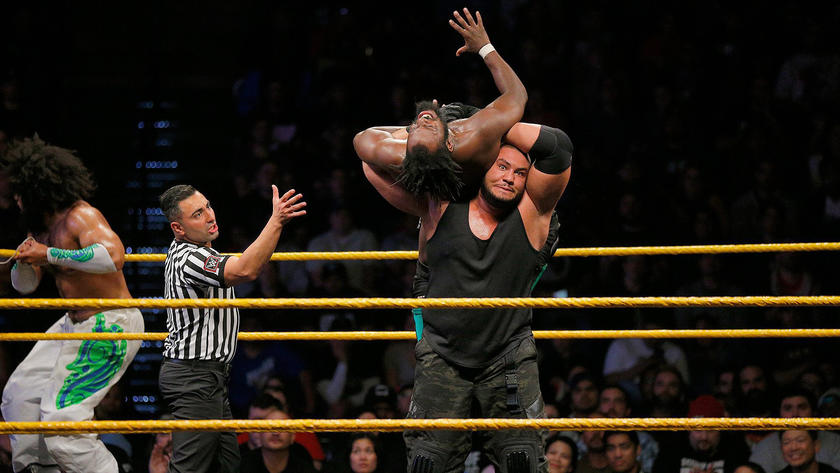 We’re back in San Jose for this match. Great reactions for both Swann and Jose, which is great to hear especially in Jose’s case. Jose and Akam start the match. Jose tries his best to avoid Akam at every turn early on, but gets dropped with a shoulder tackle. Jose manages still to back up Akam to his corner and tags in Swann. They do a double team move where Swann gives Akam a hurricanrana, but Akam gets right back up and tags in Rezar. Swann punches Rezar right in the mouth but Rezar shakes it off. Swann continues to fight but gets caught in a bearhug. Swann tries to turn it to a sunset flip and it doesn’t work. Swann hits a chop and a dropkick and then leapfrogs Rezar, who goes to the floor. Swann does a dive on both Authors of Pain but gets caught. Jose comes right behind him and jumps on all three, sending AOP to the ground finally. Swann and Rezar are still legal. Akam gets tagged in and Rezar tosses Swann into Akam, who catches him in a bodyslam and sends him hard into the turnbuckles. Swann hits the turnbuckles hard a second time and then Rezar tags in. Rezar chokes Swann over the bottom rope and then as the ref breaks it up, Ellering comes in and now chokes Swann. That’s the first time Ellering has gotten involved like that. Now Rezar has Swann up in a Dominator position, but holding him up for a submission. Swann slides out and then hits Rezar with a spinning super kick. Rezar goes to his corner though and tags in Akam. Akam tries to stop Swann from making a tag but Swann nails him with two enziguris and Jose is in the match now. Jose is able to send both men down, including Rezar to the outside, where Swann follows him there with a huge spinning splash off the top rope. Jose hits his TKO on Akam on the inside, but Akam kicks out. Jose goes to tag in Swann, but Rezar pulls him down and he lands on the steel steps. Rezar makes a blind tag and it leads to Jose getting caught in The Last Chapter and The Authors of Pain advance.

Winners: The Authors of Pain advance to the semifinals

A very cool video package is shown, hyping up the return of Mickie James. She will be taking on Asuka at Takeover: Toronto for the NXT Women’s Championship. 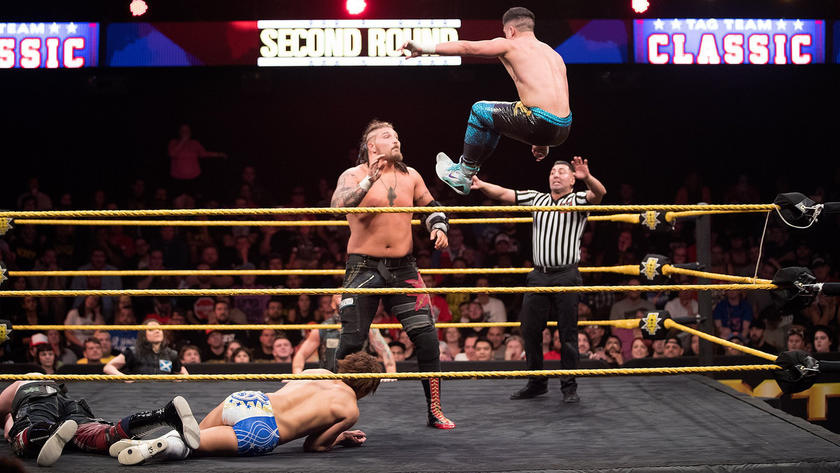 I love Sanity’s entrance so much. This match took place in Full Sail. Alexander Wolfe and Ibushi start the match. Ibushi drops Wolfe with a flurry of shots and then a dropkick. TJP makes a blind tag but ends up in a slam from Wolfe. TJP manages to escape and somehow gets Wolfe into a Kneebar but Wolfe manages to tag in Sawyer Fulton. TJP gets the Kneebar on Fulton though and Wolfe has to tag right back in. TJP takes Wolfe to his corner and tags in Ibushi. They double team Wolfe and Sanity has to regroup as we go to commercial.

We come back to Ibushi hitting a jumping knee to Fulton in the corner. TJP tags back in and goes for the 10 punch in the corner. Ibushi and TJP quick tag while working over Fulton and then send him to the outside with a double dropkick. Wolfe ends up on the outside as well and Ibushi follows him there with a Triangle Moonsault. TJP jumps over the top rope onto Fulton, but gets caught and slammed into the apron twice. They get back in the ring and Fulton splashes TJP’s back twice. Wolfe tags back in and goes on the ground so Fulton can slam TJP over his knees. Wolfe works over TJP’s neck with a submission and then slams him back over his knee. TJP kicks out at two. Fulton tags in now and they hit a double team move that ends with Fulton dropping TJP with a gutwrench suplex. TJP kicks out again. Fulton gets TJP up in a bearhug while Wolfe chews on the tag rope outside. Wolfe tags back in and they go for the slam onto Wolfe’s knees but TJP slides out. Fulton ends up getting tripped into Wolfe’s knees and Ibushi gets the tag. A series of kicks to Wolfe and then a standing moonsault that Fulton breaks up the pin. TJP comes with a front dropkick off the top that takes out Fulton. Ibushi hits the Golden Star Bomb on Wolfe but EY and Nicki Cross distract the ref. Fulton breaks it up and then he and Wolfe hit their double team slam and suplex combo to get the win!

Winners: Sanity advance to the semifinals

Your semifinal match-ups are Sanity vs. TM61 and #DIY vs. The Authors of Pain. That’s our show.

That’s it for this week, so we will be back next week which will be the penultimate episode before Takeover: Toronto. Until next time, don’t do anything I wouldn’t do. If you do though, name it after me.

A Collective Review of WCW Halloween Havoc 1995 by Lance Augustine

November 18, 2019
Welcome back to the Collective Review series where we are...

December 9, 2018
The main story going into this Smackdown centered around The...

April 10, 2021
Welcome to the TJRWrestling WWE WrestleMania 37 review for night...