Welcome one and all to the latest installment of the NXT Spotlight here at TJRWrestling. We are just over two weeks away from our next Takeover event and we have two title matches already set. Obviously everyone knows that War Games is main eventing the show but we have not seen how that match will come to be on TV yet. Is this week the week with a huge Tag Title match in the main event? Let’s get to the action and see! 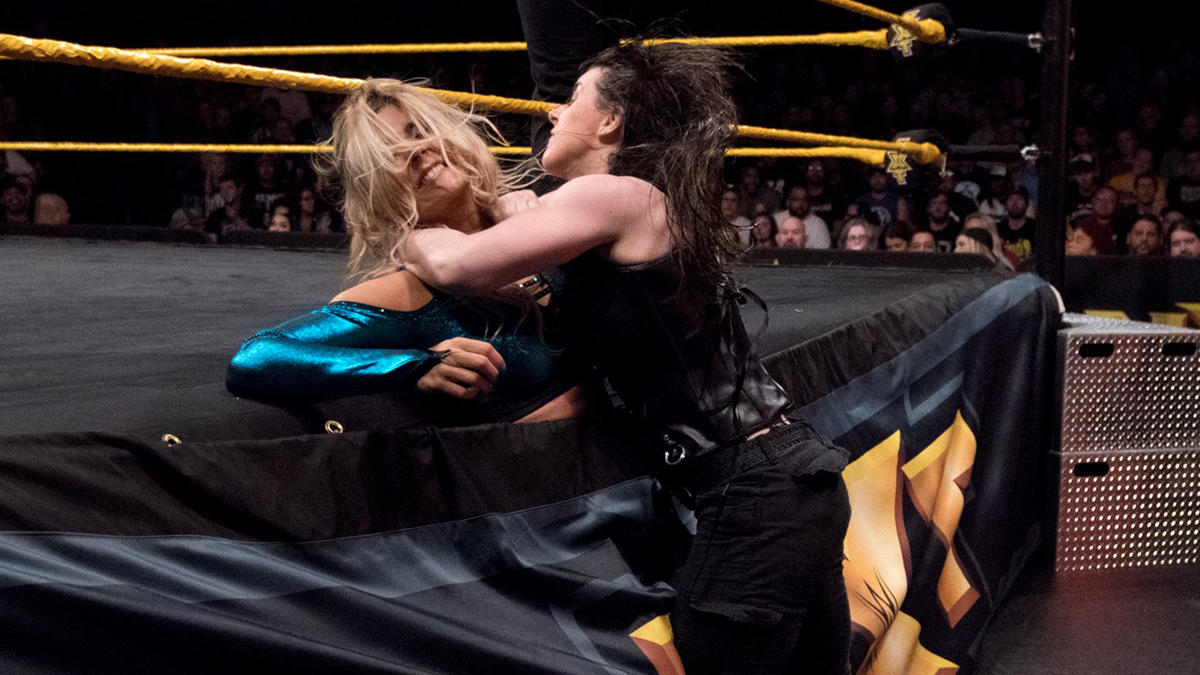 Nikki comes right at Conti with a cross body block. They brawl on the mat until Conti goes to the outside to get separation. That doesn’t work. Nikki gets Conti tied up in the ring skirt and pounds away at her. Conti kicks Nikki away and then slams her to the mat by her hair. She goes for a pin but Nikki kickso ut at one. Nikki gets to her knees and laughs at Conti. Conti stomps away and goes for a submission but Nikki gets out. Nikki with a throat thrust and then various attacks before tying Conti to the tree of woe. She then pulls Conti out of the corner with a Scorpion death drop. She follows that up with her Fisherman’s neckbreaker and that gets the win.

K-Tank’s Take: Nikki gets her revenge on Conti as she goes towards the Fatal 4 way. Not much to this beyond that.

We go to after last week’s show where Mercedes Martinez is asked about how she feels about losing the women’s battle royal. She says she’s always won the big matches until this one. She’s asked to speculate who will win the Fatal 4 way at Takeover: Houston and she says she won’t speculate who WILL win, but she’ll tell you who won’t win and that’s the person that can’t win the big one… Ember Moon. 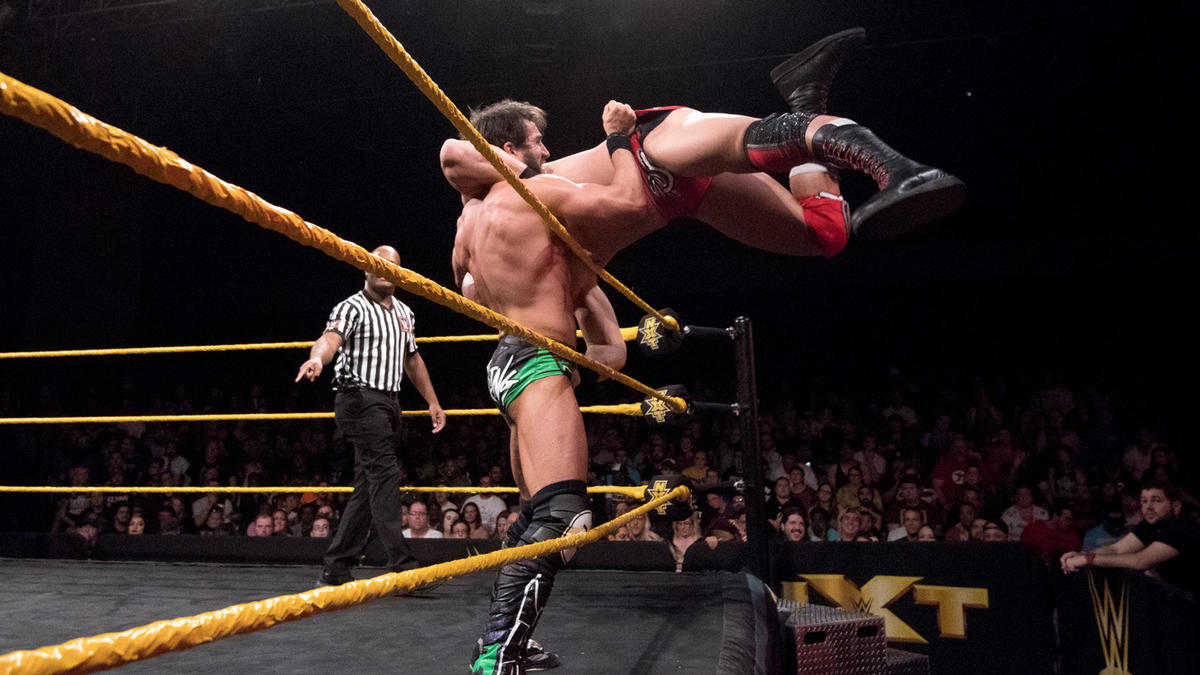 Good chain wrestling and grappling to start until Gargano catches Aichner with a sunset flip. Aichner kicks out and Gargano follows up with a headscissors and a dropkick. Aichner kicks out of another pin. Both men leapfrop each other but Gargano leapfrops once too many as Aicher catches him in midair and lands a powerslam. Gargano then dumps Aichner to the floor. Gargano goes for a dive over the top rope but Aicher catches him and drops him over the guardrail. We go to commercial.

We return with Aichner holding Gargano in a bearhug. Gargano manages to land a back elbow and then his rolling kick. Gargano with a couple clotheslines and then a couple forearm shots. He gets dumped to the apron but as Aichner comes from the opposite side, Gargano shoots himself in with his spear. Aichner manages to kick out. Aichner lands a front suplex from the apron and then goes for a double springboard moonsault but Gargano moves out of the way. Gargano goes to the apron and slingshots over with a DDT but Aichner still kicks out. Gargano gets Aichner on the turnbuckles and wants to go for a lawn dart but Aichner escapes and forearms Gargano in the spine. Gargano goes to the second rope and yet again gets caught in midair. He drills Gargano with a backbreaker and then a solid powerbomb with the double over pin but Gargano still kicks out. Both men trade multiple shots until Aichner shoots Gargano into the ropes and then lands a popup tilt a whirl backbreaker. He sets up for something else but Gargano escapes. Gargano wants to go for the Gargano Escape but Aichner turns it into an abdominal stretch and then rolls it into a pinning combination and Aichner steals a three count!

K-Tank’s Take: The story continues of Gargano having “lost it” since breaking up with Ciampa. There’s been a thing going on online with Gargano and HBK trying to figure out how to get him back on track. An “ab-off” competition was announced for Takeover: Houston on social media, but I don’t know if that’s actually going to be on air. If it is, I wouldn’t be surprised to see Ciampa make an appearance.

We go to William Regal’s office where Drew McIntyre signs the contract to make his NXT Title match official against Andrade Almas. Almas will sign the contract at ringside tonight.

We then get a vignette with Aleister Black where he is doing the voiceover talking to The Velveteen Dream. He says at Takeover: Houston, he will give TVD something he’ll never forget. TVD wanted his attention, now he’s got it. That match is now official per the graphic after the vignette.

We then go to “earlier today” where The Street Profits are admiring a Maserati car outside of Full Sail. Tino Sabbatelli and Riddick Moss come over and ask what the Profits are doing by their car. Both teams insults each other’s wardrobe. Moss and Sabbatelli tell them to stay away from the car. The Profits decide to leave and say they ain’t worried about those two. 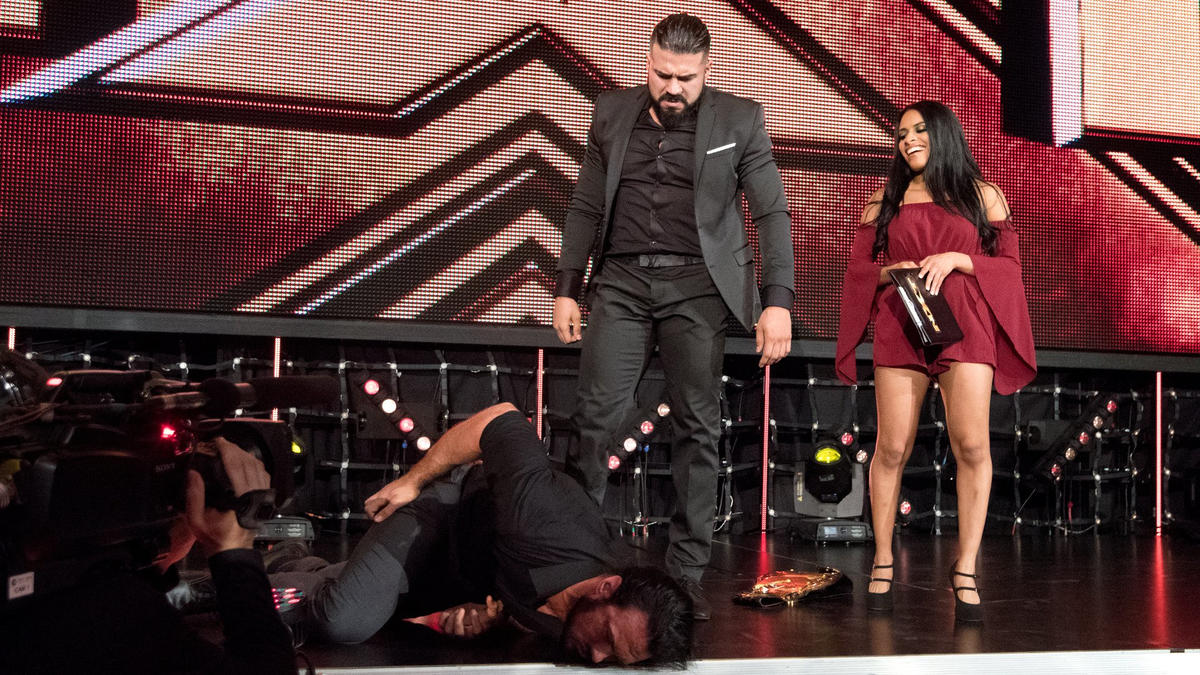 We go to “Earlier today” where Peyton Royce and Billie Kay complain that Billie isn’t in the Fatal 4 Way with Peyton. They start to make fun of Kairi Sane until she shows up. She shows them the elbow pad and makes Billie flinch before saluting them and walking away laughing. It’s shown in a graphic afterwards that Kairi will take on Billie next week. 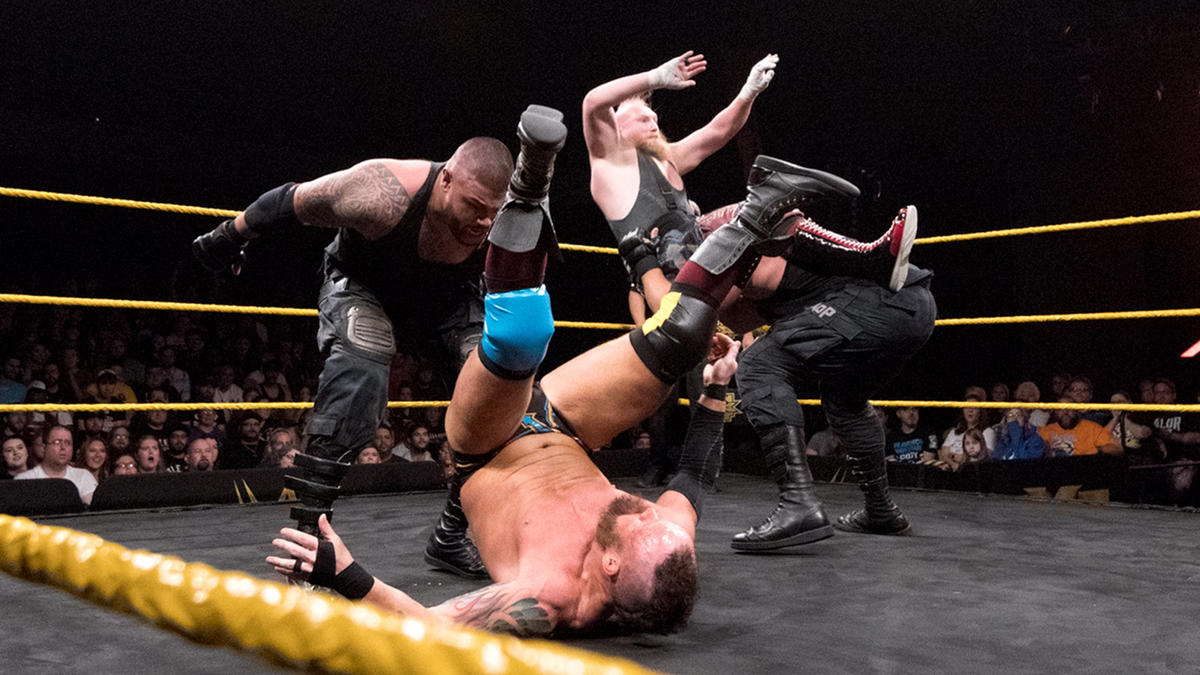 Wolfe and EY for Sanity. Everyone is barred from ringside for this match. 12 minutes left in the show after big match introductions. Akam and EY start it out. Akam ovepowers EY, despite a slap in the face by EY. Rezar tags in and picks up EY over his head but EY slides out and tags in Wolfe. Wolfe beats on Rezar in the corner and then tags in EY where they double team him. EY with a running shoulder tackle in the corner and Wolfe tags right back in. Rezar gets Wolfe up and drills him into the corner with a Death Valley Driver. Akam comes in and goes for a pin but Wolfe kicks out. Akam pounds away at Wolfe and then another tag to Rezar who does the same. Multiple tags by AOP, just wearing down Wolfe. We go to commercial with Akam grabbing a side headlock.

We come back to AOP hitting their double team sidewalk slam/front curb stomp. More wearing down of Wolfe until both he and Rezar go for a big boot at the same time. Both teams make the tag and EY comes right at Akam. EY dropkicks Rezar to the floor. Jumping neckbreaker on Akam and then EY goes to the top rope and as Wolfe hits a German suplex on Rezar, EY hits a top rope elbow drop on Akam. Akam is able to kick out. Wolfe makes a blind tag and goes to the top rope himself and comes off with a crazy clothesline. EY tags back in and they hit a double team neckbreaker but Rezar breaks up the pin. Wolfe with a big boot but Rezar comes right back with a lariat. Akam takes out EY and now AOP goes for the Super Collider and nail it. It’s time for The Last Chapter but The Undisputed Era have shown up and broken up the pin! The ref calls for the bell immediately.

Undisputed Era are taking out both teams until Killian Dain comes out but they take him out 3 on 1. They send him shoulder first into the ringpost. They go to single out Akam until Roddy Strong comes out. Roddy pulls out the armband he was given by the Era and he puts it on. Cole, Fish, and O’Reilly are elated and they get Akam up for Roddy. Roddy takes a cheap shot at Cole instead though! That gives AOP time to get up and the new threesome is able to dispose of the Undisputed Era. Roddy chunks the armband at Cole. William Regal comes out and say we’ve had chaos among these teams. At Takeover: Houston though, we’re going to have a Triple Threat tag match between Sanity, Undisputed Era, & AOP/Roddy. It won’t be just a normal match though. For these men, it’s gotta be a match so brutal, it hasn’t been seen in over 20 years. Takeover: Houston just became Takeover: War Games!!

K-Tank’s Take: Oh man, I got goosebumps all over when that announcment was made. The crowd went nuts for the announcement. War Games is the first ever show I attended back in 1988 as a kid and it’s been my all time favorite match since then. I had given up on seeing it under a WWE banner but now it’s happening. Houston is a 3-4 hour drive from where I live and so I’ve obviously decided to get tickets and attend this live. I absolutely cannot wait. It’s obviously laid out differenly than a traditional 5 on 5 War Games match, but there is so much talent in this incarnation that I know it’ll be a success. The question is, will Triple H allow it to go as violent as the originals did? And by that I mean, will there be blood?

That’s it for this week. We officially have 4 matches set for Takeover and two episodes left before the event. Until next time, don’t do anything I wouldn’t do… but if you do, name it after me!

March 14, 2017
The Undertaker’s undefeated streak at WrestleMania was on the line...