World Wrestling Entertainment held their one and only live event in India in 2017 this past Saturday in New Delhi with Triple H facing Jinder Mahal in the main event. When the match was announced, most people assumed that Mahal, who received a massive push this year as WWE Champion for six months, would get the win because he’s 17 years younger than Triple H (48 to 31) and wrestles full time while Triple H is just a part timer. If you thought that, which I did, you would be wrong. Triple H won clean with a Pedigree.

A reader at the event named Rohan Syal sent along these notes from the show:

“I was there. Triple H got the loudest POP of the night. Lots of CM Punk chants throughout the night. They originally had planned 2 shows but cancelled one. Even this one was only 60-70% full. Good event though… Mahal, Balor, Joe, Shield, Kane and Strowman got good pops. Crowd was silent during filler matches Miztourage/local talent, Crews and Titus/Anderson and Gallows, Elias/Jordan. Trips vs Mahal went over 30 minutes! Hunter is over huge here. Jinder was cheered too, but not nearly as much as Hunter.”

Thanks to Rohan for sharing that. I listened to Dave Meltzer’s Wrestling Observer radio show and he said attendance was about 9,000 people (he probably got that number from WWE), so that’s a good crowd.

Here’s a 6:30 video from WWE’s Youtube channel of the Triple H vs. Jinder Mahal match showing their introductions, highlights of the match, post match promos from each guy (those were good with Triple H telling Jinder he has earned his respect) and even some dancing with Triple H, Jinder and the Singh Brothers.

Here’s a WWE.com photo gallery from the show in India and also from one of their Abu Dhabi events.

1) It’s a house show, so who cares who wins? WWE has programmed their audience to tell them that only matches on television really matter, so having Triple H means nothing because when it comes to Smackdown on Tuesday and Clash of Champions, it’s Jinder featured on the show, not Triple H.

2) I find it pretty silly that Triple H won when there was no reason for him to. Perhaps the thinking was that by having Jinder keep it close, nearly winning and then getting the respect handshake post match was Triple H’s way of putting him over. It’s likely

The result doesn’t bother me that much because it’s a house show. I just don’t think Jinder should have lost, but at least he learned it’s all about the game and how you play it.

By the way, Triple H doing the traditional dancing with the Singh Brothers and then hitting a Pedigree was pretty funny. I expected it, but it’s still good for a laugh.

In case you missed it on Sunday morning, WWE superstar and 205 Live star Rich Swann was arrested for Battery and Kidnapping/False Imprisonment of his wife Vannarah Riggs, who wrestles a Su Yung. The couple has been married for less than a year and has been together for five years. Check out my post on Sunday if you missed it.

The short version of the story is that Swann was at her match in Gainesville, Florida and they got into an argument outside the building. Apparently Swann was yelling at her, she left the car and witnesses said he grabbed her in a headlock to get her back in the car. Swann told the cops that he didn’t hit her and that she had the GPS to go home on her phone, so he just wanted to leave. He sure could have handled it better.

Swann spent the Saturday night in jail and was released after posting bond on Sunday. The Gainseville (Florida) Police Twitter account posted the full police report on Sunday, but they have since taken it down.

“WWE has zero tolerance for matters involving domestic violence, and per our policy, Rich Swann has been indefinitely suspended following his arrest.”

The story got picked up in the mainstream news with outlets like the New York Times, ABC News, TMZ and Deadspin covering it.

I hope Swann’s wife Vannarah is okay from the incident.

As for Swann’s scheduled match on Raw tonight, that’s obviously not going to happen now. 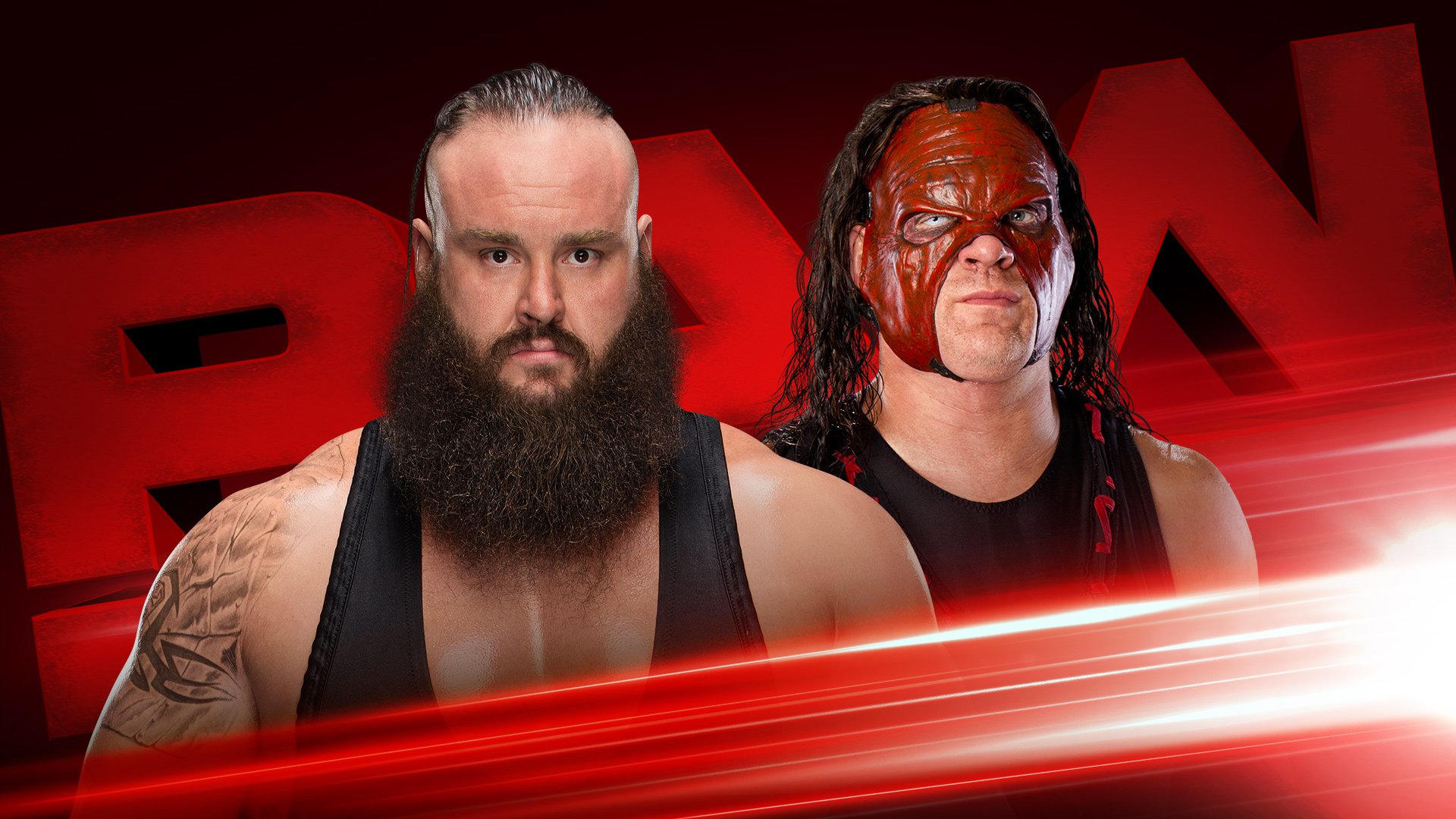 Tonight’s edition of WWE Monday Night Raw takes place from the Quicken Loans Arena in Cleveland, Ohio, which is home to the NBA’s Cavaliers. There are five matches announced for Raw tonight, which is rare although the fifth match likely isn’t happening.

I get the sense that they will do something for a couple of minutes, Kane will get disqualified because he’ll use a weapon and it will lead to some sort of stipulation match down the road. I doubt there will be a clean finish here.

This will probably be the match of the night since Cesaro is outstanding and Reigns’ matches tend to go 15 minutes because WWE is always wanting to showcase him. It may become an IC Title match to show that Reigns is a fighting champion. Either way, I doubt Reigns loses.

I think Joe should go over. Since WWE is probably building to some big match between Joe and Roman that could lead with Joe being the guy that takes the IC Title from Reigns, it makes sense for Joe to go over here. Ambrose doesn’t need the win.

Sheamus is dealing with a neck injury that limited him to working a lot less in the live events in Abu Dhabi and India. Guys wrestle hurt in WWE all the time, so it’s a just a matter of being smart about it. I think Rollins will go over here unless they opt for a short match with Cesaro causing the disqualification.

Those three singles matches should lead The Shield trio of Reigns, Ambrose and Rollins vs. Cesaro, Sheamus and Samoa Joe in a six-man tag perhaps next week on Raw or even on Christmas Day the following week.

This one won’t happen since Swann is indefinitely suspended and there’s no mention of it on the WWE.com Raw page. The original plan was for the winner to face Enzo Amore for the Cruiserweight Title. What they could do is have Gulak announced as the winner, so he faces his buddy Enzo. I think it’s more likely they do another multi-man match, have Cedric Alexander win that and he’ll beat Gulak to get the title shot at Enzo. I’m not sure obviously, but I think Gulak vs. Amore is unlikely since they are both heels.

Another thing WWE.com’s preview of Raw is pushing is the Absolution trio of women possibly focusing on Asuka while there should be more madness from “Woken” Matt Hardy in his feud with Bray Wyatt. That should be fun.

– A number of WWE superstars shared this video that made the rounds on the internet over the weekend of kid named Keaton Jones. It’s a video where Keaton talks about how kids at school bully him because of how he looks and talks. The video was originally posted by Keaton’s mother on Facebook and has gone viral all over the internet.

It’s awful to hear that because no kid should have to deal with stuff like that. Superstars like AJ Styles, Kevin Owens, Tye Dillinger, Carmella and others tweeted about it. You can click on the tweets to watch Keaton’s video as well.

It appears to me that you go to school with a lot of insecure students. When they look into the mirror, they don’t like what they see. That’s why they choose you to pick on. Stay strong and know that you have friends that have your back, like me. Stay phenomenal kiddo. https://t.co/cNiaEjbY8b

Hey #KeatonJones Your friends here at WWE are behind you. Thank you for being brave and strong enough to speak out. No one should be subject to this. https://t.co/9ia6ki4y5S

This seriously breaks my heart. It will get better, Keaton! You have a voice to help others stay positive! Spread love, not hate. 💜 https://t.co/n2OXaJ0zSF

Bullying is never OK! We must teach our kids that its not OK! Help is on the way from every corner of the country! @WWE https://t.co/rvMD3DWRg7

Good for the WWE people to speak up about this. Plenty of other athletes and celebrities have mentioned it too. Hopefully it’s uplifting for Keaton and that the kids at school can learn from this.

– Kurt Angle shared this Instagram post of a kid that chants “You Suck” at him along with the crowd. It is not one of Kurt’s five kids, but it’s pretty funny.

That was great and it may be tough for anything on Raw to top it!

Roman Reigns wrestled Triple H in Abu Dhabi and Triple H put him over. They had a respect handshake after the match. It includes a post match angle with Cesaro, Sheamus and Samoa Joe attacking Reigns after the match, thinking Triple H will join them and then Triple H ends up fighting them. That led to Rollins and Ambrose going out there for the save and Triple H celebrated with The Shield trio.

Here’s a Top 10 WWE video of “Mad Superstar Rantings” with the Ultimate Warrior as the thumbnail, of course.

Here are the Singh Brothers hanging out with Sasha Banks and Alexa Bliss in India.

WWE posted an animated video of Happy Holidays featuring their superstars “singing” their own unique song.

– Check out Marc Madison’s column looking at how WWE’s business is going well, but they may need to take some risks in order to reap more rewards going forward.

– I reviewed the most recent edition of WWE’s Table for 3 show on WWE Network with the legendary trio of Ric Flair, Sting and Ricky Steamboat as the guests. It was recorded back in April around WrestleMania time. As is always the case with this show, it left me wanting more because the conversation was great, but this show isn’t long enough.

I’ll end with this video of Matt Hardy’s laughter for 10 hours straight. I know these 10 hour vids are a thing on Youtube. I didn’t expect WWE to do one. It’s a funny idea, but I don’t advise watching it all. Might get repetitive after about 30 seconds.

That’s all for now. Comment below with any thoughts/questions and I will reply or hit me up on Twitter @johnreport as well. Thanks for reading. I’ll be back on Monday for more.

TJR Retro: WWE No Way Out 2007 Review (Cena/Michaels vs. Batista/Undertaker)