The only WWE Elimination Chamber matches that took place in front of no fans happened in 2021 when six Smackdown competitors faced off for a Universal Title shot and there was also a WWE Championship on the show. This is about the Smackdown match.

The reason there were no fans was due to WWE running events out of the Thunderdome structure due to the COVID-19 global pandemic causing companies like WWE to do shows without fans in attendance. It was an awkward time that we’ll never forget, but to WWE’s credit, they kept the wheels in motion and continued to produce shows. 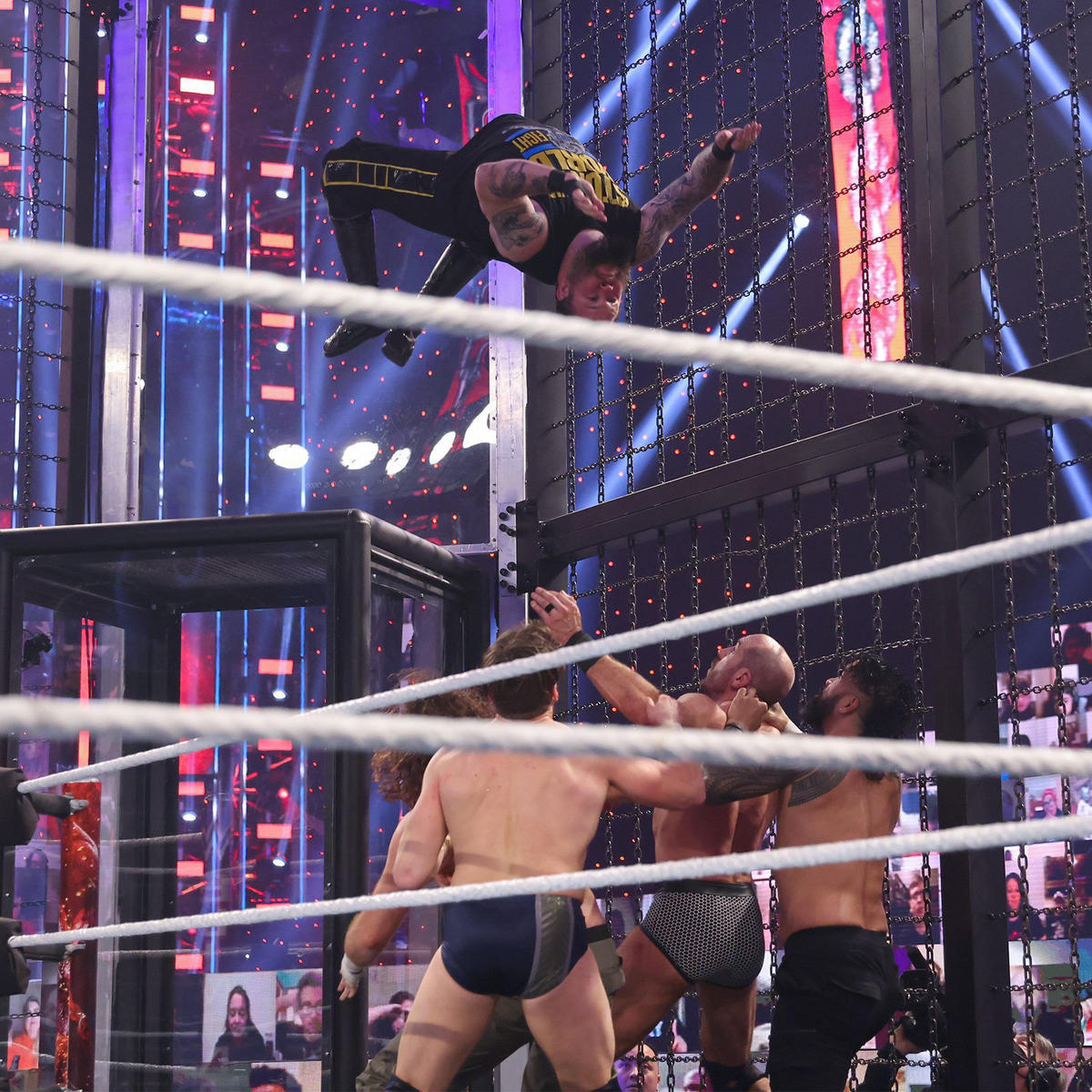 The entrances took place for the Smackdown Elimination Chamber match. Kevin Owens was up first with Cole noting it was KO’s first EC match in his career. Sami Zayn was up next with his documentary crew filming him on his way to the ring. Zayn greeted on again/off again best friend Owens, who was trash-talking Sami. The referee Jessika Carr told the documentary crew to leave with Zayn complaining about it while noting that he paid them to be there. King Corbin was up next to enter one of the pods. Jey Uso was the last man to enter a pod, so that means Daniel Bryan and Cesaro are starting the match. Owens was fired up to go after Jey.

Before the final two entrances, they aired a video package about Elimination Chamber and the winner facing Universal Champion Roman Reigns. I don’t think we needed another video package, but here we are.

Cesaro made his entrance with Cole noting that nobody has been hotter than Cesaro of late. That is true because Cesaro has won a lot of matches of late and also turned babyface during that winning streak. Daniel Bryan was up last as the most popular man in the match as well as a former WWE Champion and two-time Elimination Chamber match winner. 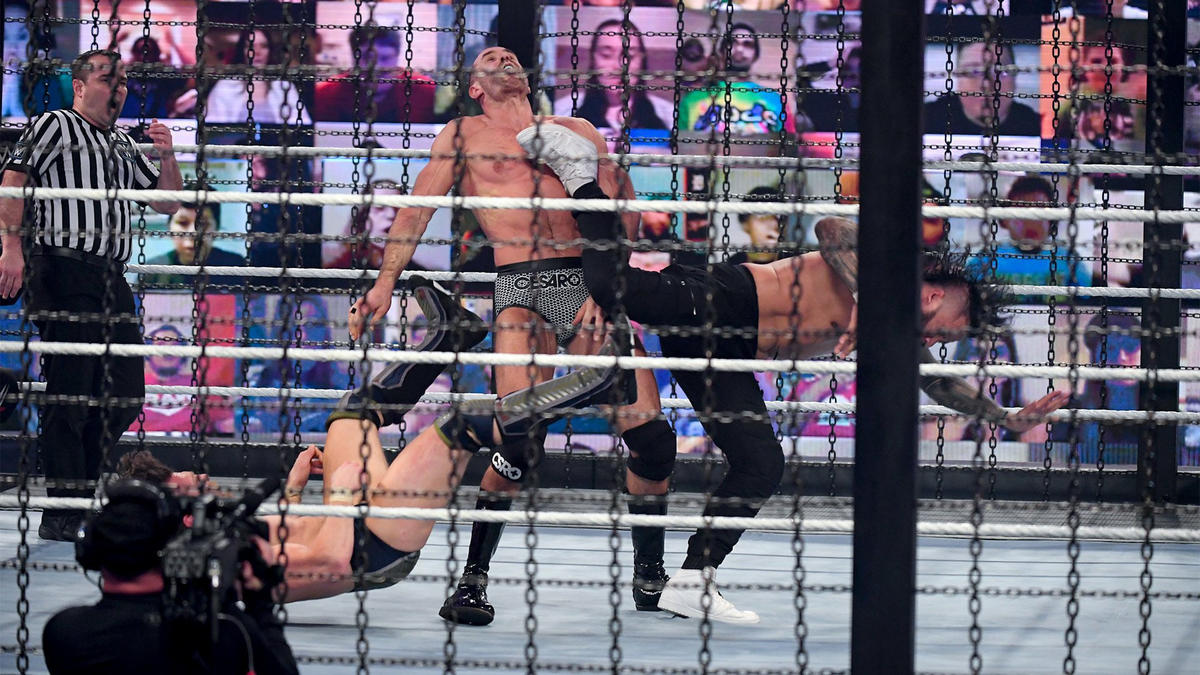 Cesaro started with Bryan with Cesaro getting multiple shoulder tackles. Cesaro with a spinning backbreaker for a two count followed by Cesaro hitting an uppercut. Bryan ran the ropes leading to a running clothesline. Cesaro rocked Bryan with an uppercut, but then Bryan sent Cesaro over the top to the floor into the cage. There is padding outside the ring, but the cage does hurt. Bryan jumped off the top with a knee, then back in the ring and Bryan hit a missile dropkick for two. Bryan countered a slam off the turnbuckle with a hurricanrana. Cesaro with a clothesline leading to a flip bump for Bryan. Cesaro wrenched on the left knee of Bryan, but Bryan countered that into an armbar, which Cesaro countered into a pin attempt for two. Cesaro rocked Bryan with two uppercuts. Cesaro hit a delayed vertical suplex for a two count. After five minutes, the clock ticked down for the next entrant.

The third man in the match was King Corbin, who drove Cesaro back first into one of the pods. Corbin whipped Bryan into the cage. Corbin hiptossed Cesaro from the outside of the ring to the inside. Bryan hit running dropkicks on both guys, then Cesaro with uppercuts on both guys. Corbin hit the Deep Six slam on Cesaro and a Deep Six slam on Bryan with Corbin getting two counts on both guys. Corbin picked up Bryan and drove him left knee first into a pod and then Corbin sent Cesaro back first into the pod. Zayn: “Keep him away from my pod!” Sami rules. Corbin drove Bryan’s left knee into Jey’s pod as well. Corbin sent Cesaro into the cage. Corbin with a belly to back slam for a two count. Corbin kneed Cesaro to knock him out of the ring. After five more minutes, it was time for another wrestler to enter the match.

The fourth entrant was Sami Zayn, who wasn’t happy about it. Zayn didn’t want Corbin to come after him, so he kept the door shut as much as he could. Bryan kicked Corbin into the pod. Cesaro got a hold of Zayn and beat him up a bit. Zayn sent Cesaro into Jey’s pod. Bryan got a hold of Zayn leading to Bryan whipping Zayn into the cage repeatedly. Corbin was back into it with punches on Bryan. Zayn sent Corbin into the pod to knock the big man down. Zayn charged at Bryan outside the ring, Bryan moved and Zayn did a Helluva Kick into the pod that Kevin Owens was inside. Zayn sold that as a foot injury. Corbin hit a superplex on Bryan with Corbin standing on the middle rope. Zayn hit a Tornado DDT on Cesaro on the padding outside the ring and that got a two count for Zayn. Zayn ran at Cesaro, who lifted Zayn on top of Jey’s pod. Cesaro and Zayn were fighting on top of the pod. Cesaro hit Zayn with three uppercuts, but then Zayn did an eye gouge. That led to Zayn walking across the middle part of the cage and then Cesaro kicked Zayn onto the mats below. That fall by Zayn was like falling from a few feet higher than the top rope. Corbin caught Cesaro and clotheslined him back in the ring. Corbin caught Bryan and gave him a Chokeslam. Cesaro went for a corkscrew uppercut off the ropes, Corbin caught him and then Cesaro sent Corbin into the turnbuckle. Cesaro with an uppercut off the turnbuckle. Cesaro with the Cesaro Swing on Corbin and then the Sharpshooter led to Corbin taping out. They took about eight minutes between intervals here.

The fifth man in the match was Kevin Owens, so Sami Zayn tried to convince Owens that they should do this together like old times. Owens didn’t agree with that as he whipped Zayn into pods repeatedly. Owens knocked down Cesaro in the ring, then he had Bryan on his back and Owens dropped back with a senton on Bryan onto Cesaro. Zayn tried attacking Owens, then Zayn bit KO’s arm and Sami knocked Owens down. Zayn jumped off the top, Owens moved and Owens hit Zayn with a superkick. Owens hit cannonballs on Cesaro, Bryan and Zayn. Owens pointed at Jey to let him know he was coming for him. All four guys hit moves in success with Zayn hitting a Dragon Suplex on Owens, Cesaro with an uppercut on Zayn, Bryan with a running knee on Cesaro and Owens with a Popup Powerbomb on Bryan. All four guys were down on the mat. Owens with a neckbreaker into a knee on Zayn for two. Owens with a neckbreaker into the knee on Bryan for two. Owens picked up Cesaro as the clock ticked down after five minutes. Owens tossed Cesaro away.

Zayn was leaving the ring, so Jey slammed the door onto the right arm of Owens. KO was trapped against the door, so Jey hit him with four superkicks in the face. Jey with another superkick to knock Owens down in the ring. Jey with an Uso Splash on Owens to pin and eliminate KO from the match.

Jey attacked Bryan with a stomp onto the back of the left knee. Jey charged at Cesaro, who decked Jey with an uppercut. Cesaro jumped off the top with an elbow drop on Jey for two. Cesaro did the swing on Jey into the cage repeatedly. Cesaro jumped off the top to attack Bryan, but Bryan got back up and kicked Cesaro in the ribs. Bryan was favoring his left knee. Bryan with a backslide pin on Cesaro for two followed by a roundhouse kick to the head of Cesaro for another two count. Bryan held the arms of Cesaro while stomping on the head repeatedly. Bryan set up in the corner, the “YES” chants began and Cesaro countered the running knee, but Cesaro caught him and Bryan got a two count. Bryan with another kick to the head. Bryan went up top with Cesaro stopping him with an uppercut. Cesaro stood on the middle turnbuckle, he had Bryan on his shoulders and Cesaro delivered a gutbuster where he drove the knee into the ribs. Cesaro with a one-legged Swing on the bad left knee. Jey with a superkick on Cesaro. Jey jumped off the top with an Uso Splash on Cesaro for a three count.

Analysis: I thought a Cesaro win was possible, but it didn’t happen here.

Jey hit an Uso Splash off the top rope on Bryan for just a two count. Jey went up to the top of a pod and went for an Uso Splash on Bryan, but Bryan got the knees up to block. Bryan hit the running knee on Jey for the pinfall win at 34:20.

Analysis: **** It was a great match. Most Elimination Chamber matches are full of action and clever eliminations, which this match delivered as well. I really liked the way Cesaro dominated most of it, Bryan sold the left knee very well and that spot where Jey Uso weakened Kevin Owens before eliminating him was smart as well. I liked Sami Zayn’s role as a reluctant heel who took advantage when he could, but it wasn’t a surprise that he and Corbin lost. I picked Owens to win, but I thought it would be either him, Cesaro or Bryan, so I’m fine with the choice of Bryan winning his third Elimination Chamber match in his career.

The Elimination Chamber structure went up, Bryan was still on the mat after getting beat up in that match and it was time for the next match. 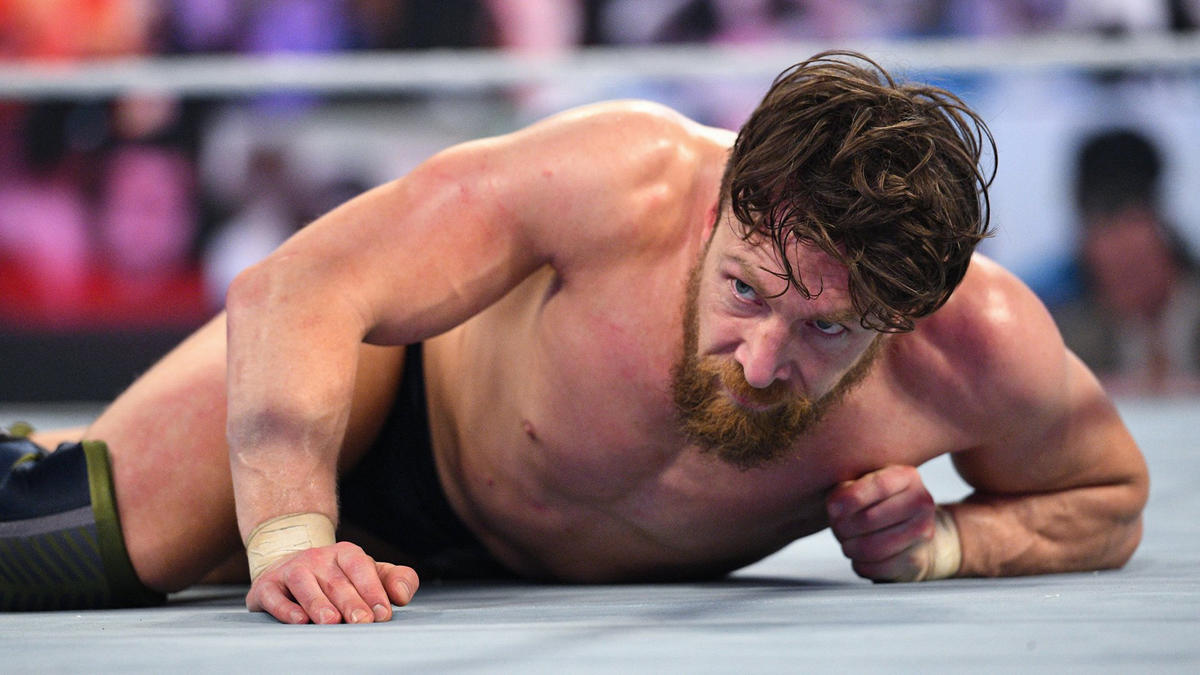 (Bryan would end up losing his Universal Championship match to Roman Reigns in just 1:32, so even though Bryan won in the Chamber, he lost right after it.)