The only WWE Elimination Chamber matches that took place in front of no fans happened in 2021 and now it’s time to look at the WWE Championship from that show.

Six superstars from Raw faced off in this match with Drew McIntyre walking into the Thunderdome as the WWE Champion against five top contenders.

This match had the Elimination Chamber matchup as well as a Money in the Bank cash-in after the match, so I’ll include that as well. 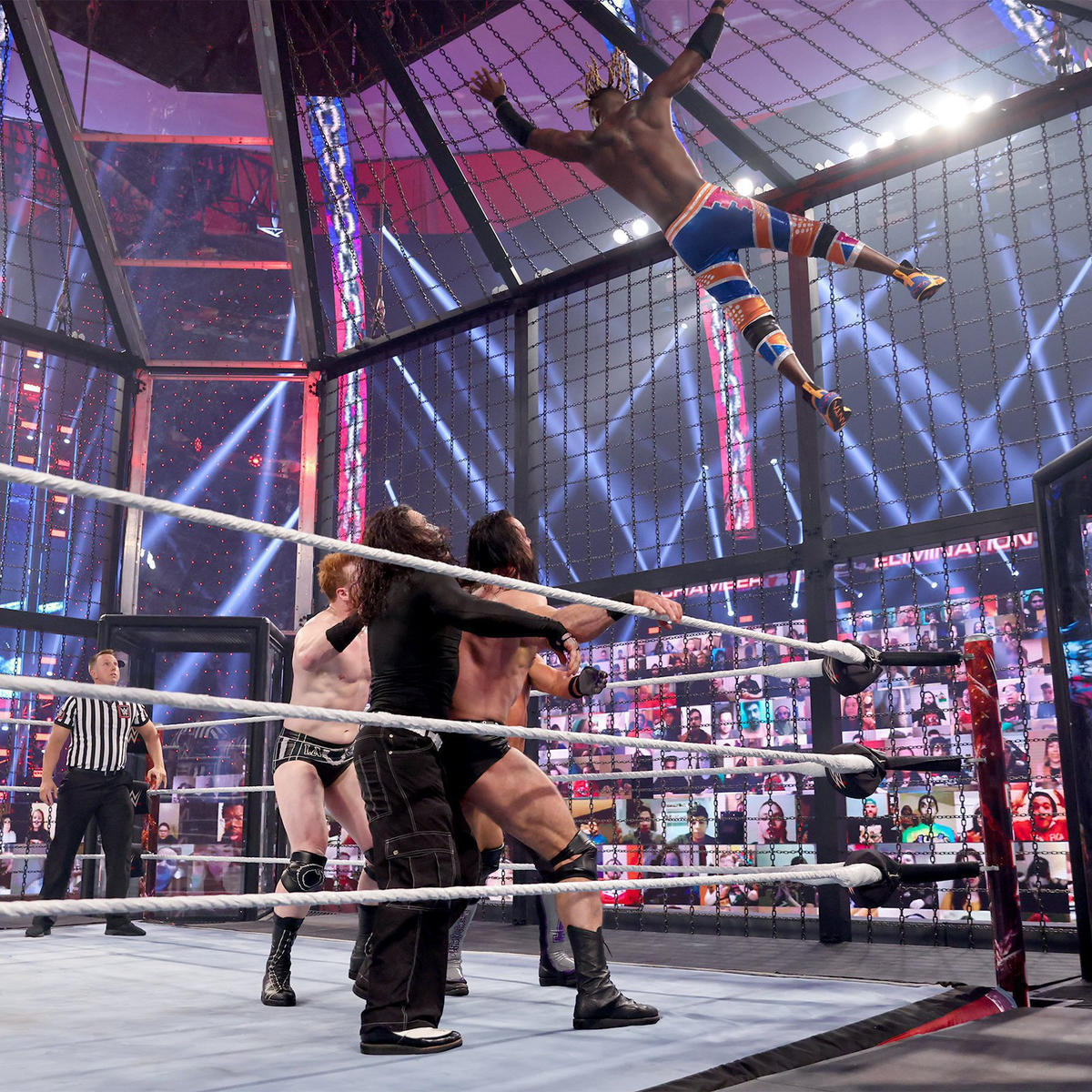 There was a video package for the Raw Elimination Chamber match with the WWE Title on the line. It focused on the six men in the match along with the tease of Miz wanting to cash in his Money in the Bank contract.

The WWE Champion Drew McIntyre was up first meaning he’ll be in one of the pods to start the match. AJ Styles was up next with the big man Omos joining him at ringside. Kofi Kingston was up third with Kofi checking behind him for his entrance due to a past Chamber match where he was attacked by Edge and lost his spot in the match. Sheamus entered last because we know he’s the sixth and final entrant in the match. Jeff Hardy was next followed by Randy Orton with Jeff and Randy starting the match. 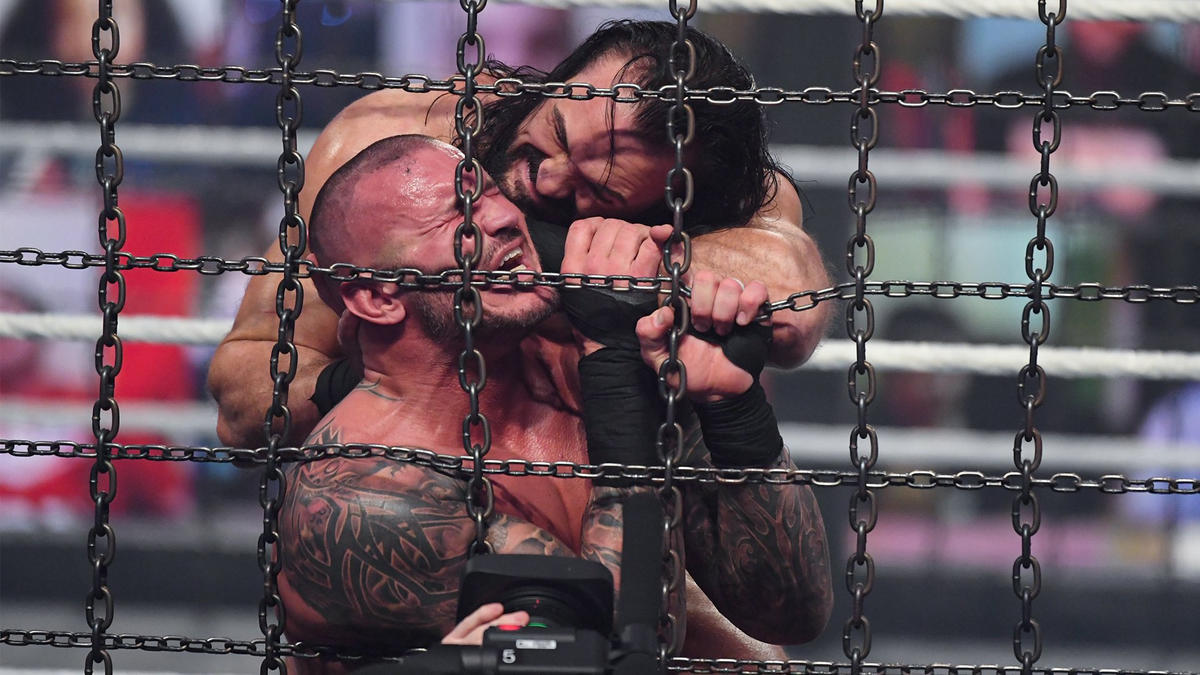 Orton started with Hardy with Orton kicking Hardy and stomping on the foot. They battled on the padding outside the ring with Hardy punching Orton and dropkicking Orton into a pod. Hardy charged, Orton moved and Hardy hit the turnbuckle. Orton stomped on the ribs followed by a chinlock. Hardy back up with a forearm, atomic drop, double legdrop and a dropkick into a splash for two. Hardy with a boot to the face followed by a splash off the middle ropes for two. After five minutes, it was time for the next entrant.

The fourth entrant in the match was Kofi Kingston, who faced off with an old rival in Orton. Kingston managed to trip up Orton with his legs and then sat on top for the pinfall.

Analysis: I thought there would be a distraction from The Fiend to cost Orton this match, but there was no sign of that.

Styles told Omos to help him get out of the pod, so Omos pulled apart the pod and then Styles went for pin attempts on Hardy and Kingston for two counts. That led to WWE Official Adam Pearce showing up at ringside and he ejected Omos from ringside. Styles wasn’t happy about that as Omos went up the ramp to the back. Kingston jumped off the turnbuckle with a DDT on Styles on the padding. McIntyre sent Hardy into a pod. Kingston with an SOS trip on McIntyre for a two count. Styles hit a brainbuster on Kingston for a two count. Kingston tried a headscissors off the ropes, but Styles slammed Kofi onto the padding outside the ring. Kingston did a monkey flip that sent Styles into the cage. Kingston went for a submission, but McIntyre countered with a suplex. McIntyre suplexed Kingston back first into the cage. McIntyre with a huge back body drop on Styles. McIntyre sent Hardy back first into the cage and then back in the ring where McIntyre dropped Hardy with a neckbreaker for two. The clock ticked down for the last man in the match.

Sheamus entered as the sixth entrant with the announcers putting this over as a huge confrontation between the best friends that got into a slugfest right away. McIntyre with forearms to the back, Sheamus with a knee and forearms. Hardy and Kingston got involved, so McIntyre and Sheamus knocked them out of the ring. Sheamus rocked McIntyre with a forearm, then Drew came back with a clothesline with both guys going over the top to the outside ring area. Styles sent Kingston into the cage as Sheamus stepped on the face of McIntyre. Kingston jumped off the top onto McIntyre and Sheamus, who were on the padding outside the ring. Styles jumped off the top, but Kingston stopped him with a punch to the ribs. Sheamus with forearms to Kingston, then Kofi slid out of the ring leading to a kick. Sheamus rocked Kofi with a punch while on the turnbuckle. McIntyre tripped up Sheamus to crotch Sheamus across the top turnbuckle. McIntyre chopped Styles to knock him down. McIntyre wanted a superplex, so Styles and Hardy got involved leading to a double Powerbomb in a Tower of Doom spot out of the corner. Hardy and Styles each got two counts. Kingston was on top of a pod and jumped off backward with a trust fall onto four guys. Kofi got multiple two counts and a one count on McIntyre. Kofi battled Sheamus with chops, then Sheamus ran right into a boot. Kofi jumped off the top, Sheamus caught him, put him down and Sheamus bounced off the ropes with a Brogue Kick leading to Sheamus pinning Kingston.

Sheamus with a thumb to the eye on McIntyre and a knee to the face for a two count. Sheamus battled with McIntyre, then Drew managed to hit a headbutt and then Sheamus hit a White Noise slam on McIntyre. Styles jumped off the top with a Senton Bomb on McIntyre for a two count. Styles with a springboard 450 Splash on McIntyre for another two count. I think Styles did it twice because the first time, Drew was too close to the ropes to do a 450 Splash, so that’s why Styles did it again. Sheamus worked over Styles with the ten forearms to the chest. Sheamus sent Styles into the cage. McIntyre knocked Sheamus down by the turnbuckle. McIntyre charged and Sheamus hit him with a Brogue Kick. Styles capitalized on that with a Phenomenal Forearm on Sheamus and Styles pinned Sheamus to eliminate him. 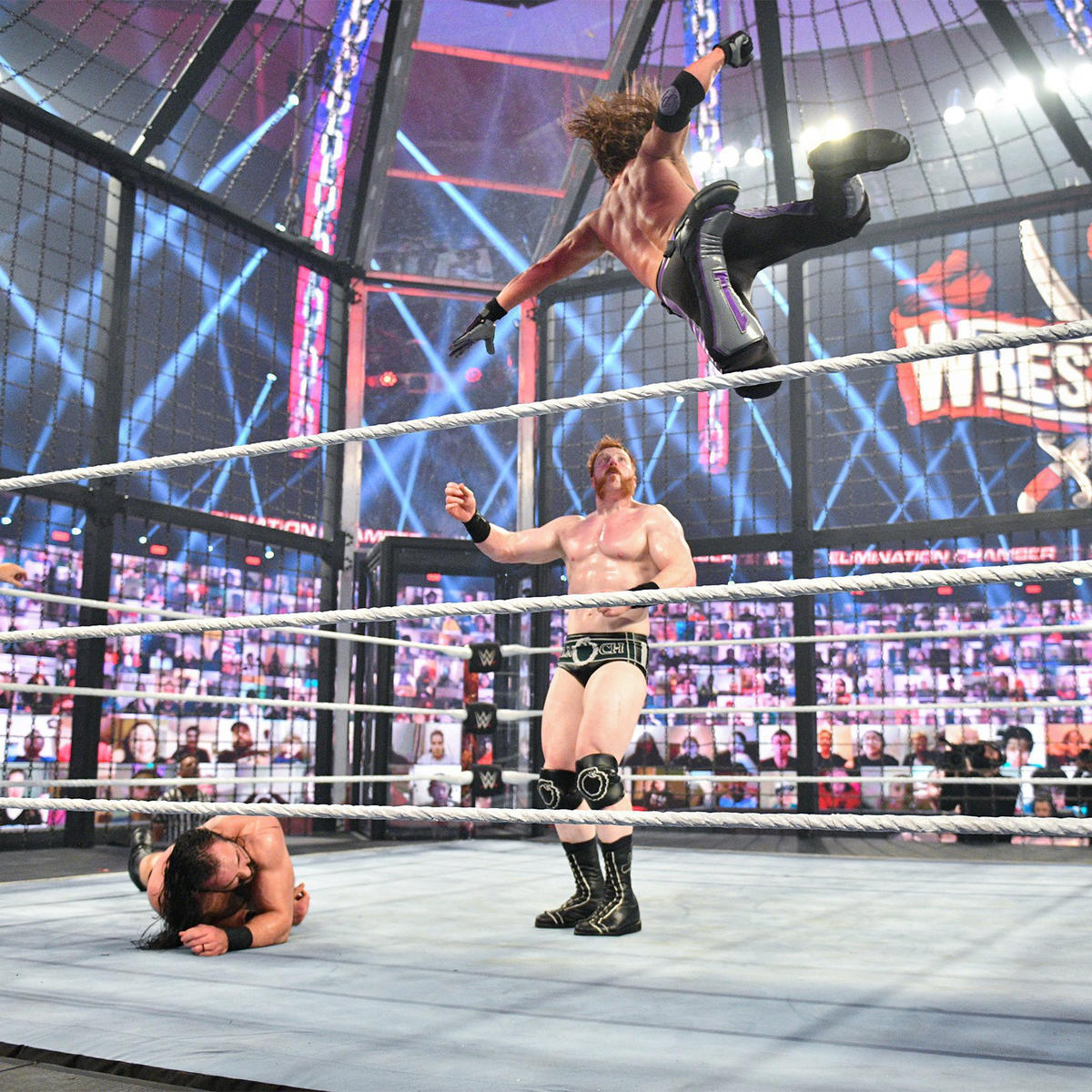 McIntyre got back up, Styles jumped off with a Phenomenal Forearm attempt that and McIntyre hit the Claymore Kick on Styles to win via pinfall. The match went 31:10.

Analysis: ***3/4 This was a pretty good Chamber match. I liked the first Chamber match a bit more, but all of the elements were here as well. I thought the focus of the match would be on McIntyre/Sheamus and it was for most of it, but then McIntyre finished off Styles to win it. That’s fine because it was a spectacular ending with McIntyre hitting the Brogue Kick on Styles when AJ was jumping off the top. That looked impressive. As I noted earlier, I thought Randy Orton would have lasted longer and maybe The Fiend would cost him the match, so I was a bit shocked when Kofi beat Orton so easily. Jeff Hardy was in there as the sixth guy that did some good things but really didn’t stand out much at all. McIntyre was in there for nearly 30 minutes, took a beating and still found a way to keep his title as the fighting babyface that he is.

McIntyre was exhausted as replays were shown of the match. Bobby Lashley showed up out of nowhere with a cheap attack. Lashley sent McIntyre into the barricade and into the announce table. Lashley rammed McIntyre’s head into the announce table repeatedly. Back in the ring, Lashley hit a flatliner. Lashley slapped on the Hurt Lock submission on McIntyre leading to a Full Nelson slam. Here comes The Miz with the Money in the Bank briefcase! Lashley left with Saxton correctly pointing out that we saw MVP talking to Miz earlier.

Analysis: When Lashley lost the US Title, it made sense for him to want to go after the WWE Title again. Lashley has been booked so strong, so I don’t really mind him going after McIntyre again.

The Miz had a referee with him and Miz cashed in the Money in the Bank contract right now. The referee waited for McIntyre to get back to his feet while up against the turnbuckle. The WWE Title match was on.

Miz kicked Drew’s knee and hit a DDT for a two count. The Miz hit the Skull Crushing Finale on McIntyre and The Miz covered to win the WWE Title at 0:32.

Winner by pinfall AND NEW WWE Champion: The Miz

Analysis: No point in rating that. I’m a fan of the Money in the Bank concept, so at least the MITB winner won the title even though he wasn’t the original MITB winner. It’s a way to build a story moving forward.

(The Miz only held the WWE Title for eight days when Bobby Lashley beat him for the title on Raw. The deal was that Lashley would get a title shot if he took out McIntyre to help Miz cash in Money in the Bank. The Miz was scared of facing Lashley, but the match was made. Lashley went on to face McIntyre at WrestleMania, which meant that Miz was just a transitional champion.)