Six of the top stars on the WWE Raw brand competed in the main event of Elimination Chamber 2020 in a match to earn a title match at WrestleMania.

This event took place in March 2020, which is the month when a lot of things changed in the world due to the Coronavirus pandemic causing a lot of things to shut down. This was WWE’s last regular PPV with a full crowd for over a year.

The video package aired for the Women’s Elimination Chamber featuring women from Raw. There is not even much of a story here, but they still got a video package.

Analysis: This is one of the most poorly booked PPV main event matches there has ever been. That statement has nothing to do with the wrestlers. I’m just saying WWE has done a weak job creatively to make this feel like a big match.

The entrances took place for the Women’s Elimination Chamber match. It took a long time through six entrances and the crowd barely reacted to anybody. The lack of strong faces in this match was evident by the weak reactions. 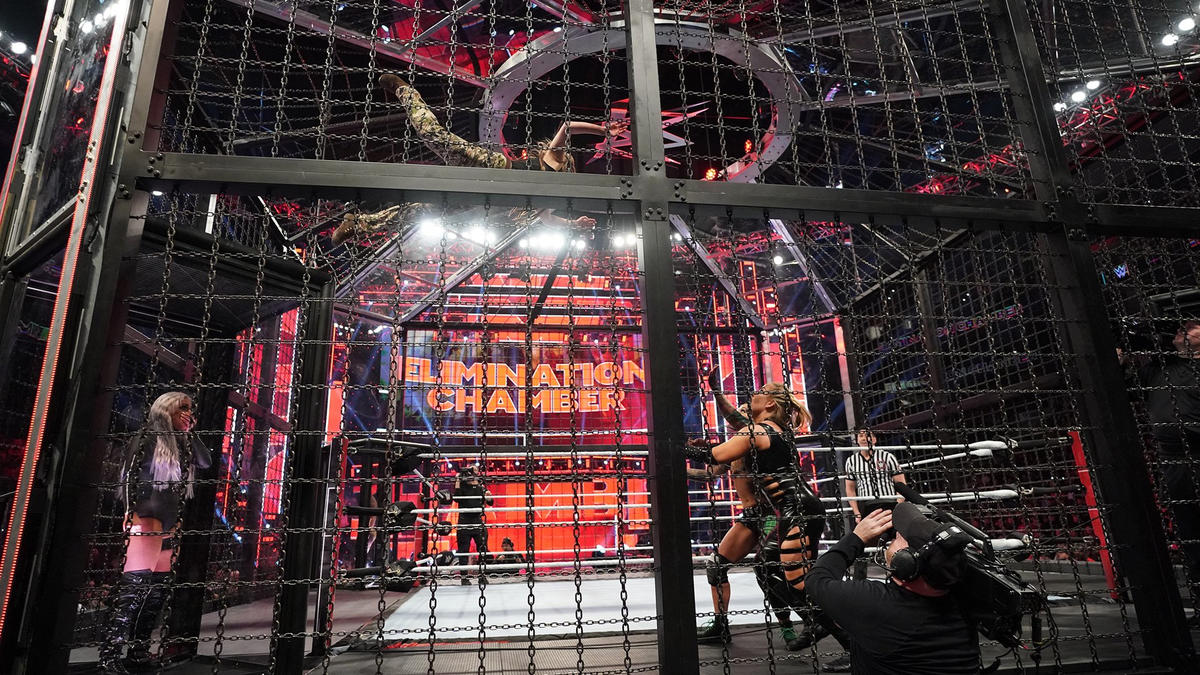 The winner of this match gets to challenge Becky Lynch for the Raw Women’s Title at WrestleMania.

Riott got a rollup on Natalya early, then some forearms and Natalya sent Riott into the cage. They left the ring with Natalya hitting a suplex on Riott on the mat outside the ring. When that was a cage there it was a lot more brutal, but it’s safer now. Natalya slapped on a Sharpshooter, but Riott countered by sending Natalya back first into the Lexan pod. Becky Lynch was shown watching backstage on a TV. Riott climbed up the cage and jumped back onto Natalya, which led to a two count in the ring. Riott with an STO trip on the mat and Riott whipped Natalya into the cage. Natalya got Riott on her shoulders as they battled by the cage and Natalya sent Riott back first into the cage.

Sarah Logan was the third woman in the match as she hit a running knee attack that sent Natalya back first into the Lexan pod. Riott climbed up the cage, Logan went after her and Logan gave Riot a headbutt. Natalya pulled Riott down and gave her a sitout Powerbomb on the mat. Logan jumped off the top with a cross body block and Logan’s right knee hit Natalya in the face. That looked brutal. Logan went for a superplex on Riott, so Natalya went over there for a Tower of Doom spot with a powerbomb/superplex combo. That’s the second Tower of Doom spot in the last three matches.

Shayna Baszler was the fourth woman to enter the match. Baszler whipped Natalya shoulder first into the post. Baszler with a spinning slam on Logan, then a knee to the face and Baszler slapped on the Kirifuda Clutch. Logan tapped out quickly.

Logan went after Riott with the same sequence of moves with a slam off the shoulders, a knee to the face and then the Kirifuda Clutch submission. Riott tapped out quickly. 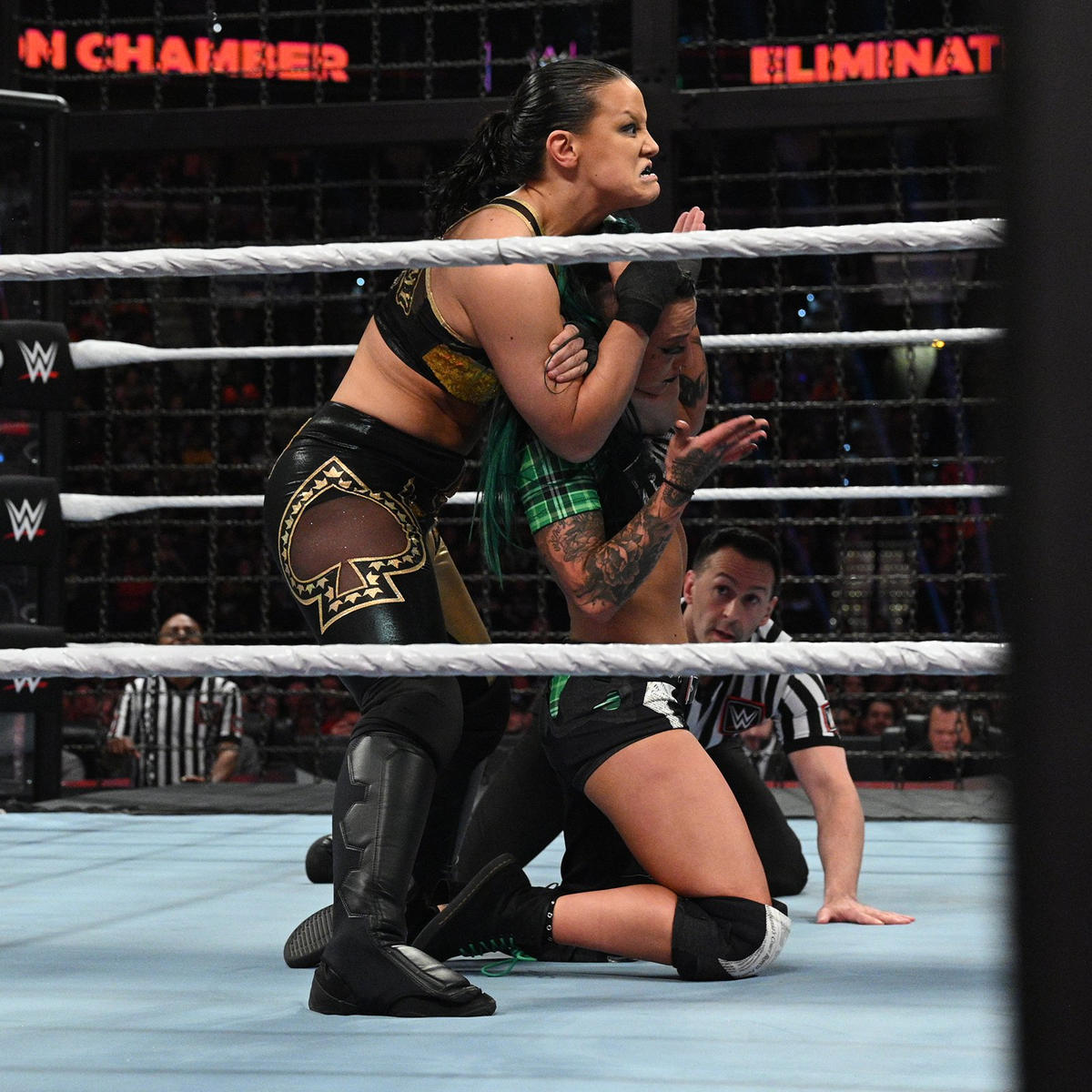 Baszler whipped Natalya into an empty pod so Natalya went back first into the glass. Baszler shut a door repeatedly on Natalya and Baszler slapped on the Kirifuda Clutch while outside the ring. Natalya tapped out from the pain.

Baszler waited in the ring for the next opponent as replays aired of Shayna’s first three eliminations. The fans were getting restless and booing as this dragged on.

Liv Morgan was the next woman to enter the match. Morgan kicked Baszler, but Baszler shoved her into the cage. Baszler caught Morgan and sent her into the cage back first. Baszler swung Morgan around with Liv’s upper body hitting the cage and the side of the pod, which made a loud noise. Baszler hit a running knee on Morgan. Baszler went over to Asuka, she taunted her and Baszler slapped on the Kirifuda Clutch while against the ropes. The move looked more like a chinlock. Morgan passed out, so that was it for her.

Baszler waited for a few minutes and then Asuka was released from her pod.

Baszler avoided a kick, Asuka with a running hip attack and kicks to the chest. Baszler blocked a kick, tripped up Asuka and hit Asuka with three knees to the chest. Asuka tried a pin attempt, Baszler fought it and Asuka hit a kick to the head. Asuka went for the Asuka Lock, but Baszler rolled through and Asuka slapped on the Asuka Lock again. Baszler rolled out of the hold and Baszler sent Asuka back first into the cage three times. Baszler pulled on Asuka’s left arm against the ropes. Baszler slapped on the Kirifuda Clutch, Asuka tried to fight it and you can tell Asuka said something to her. Baszler with a kick to the arm and Baszler hit a slam off the shoulders followed by the knee to the face. Baszler slapped on the Kirifuda Clutch submission on Asuka, who passed out. Baszler wins it at 21:03.

Analysis: **1/2 It was one of the most dominant performances ever in an Elimination Chamber match with Baszler eliminating all five opponents. This was the right way to book the match because if it was a longer match where Baszler struggled to win then it wouldn’t make her stand out heading into WrestleMania against Lynch. By having Baszler booked this strongly, it will make fans think that Baszler is unstoppable. It made sense to make Natalya and Asuka look like the toughest of the opponents, but this match did not help any of the three Riott Squad women. This wasn’t a PPV main event level match. It was just a dominant performance for Baszler to try to make her look like a credible threat to Lynch.

Baszler celebrated the win in the ring as a WrestleMania graphic was shown for her match against Becky Lynch. Baszler pointed and stared at the WrestleMania sign in the arena. That was the end of the show. 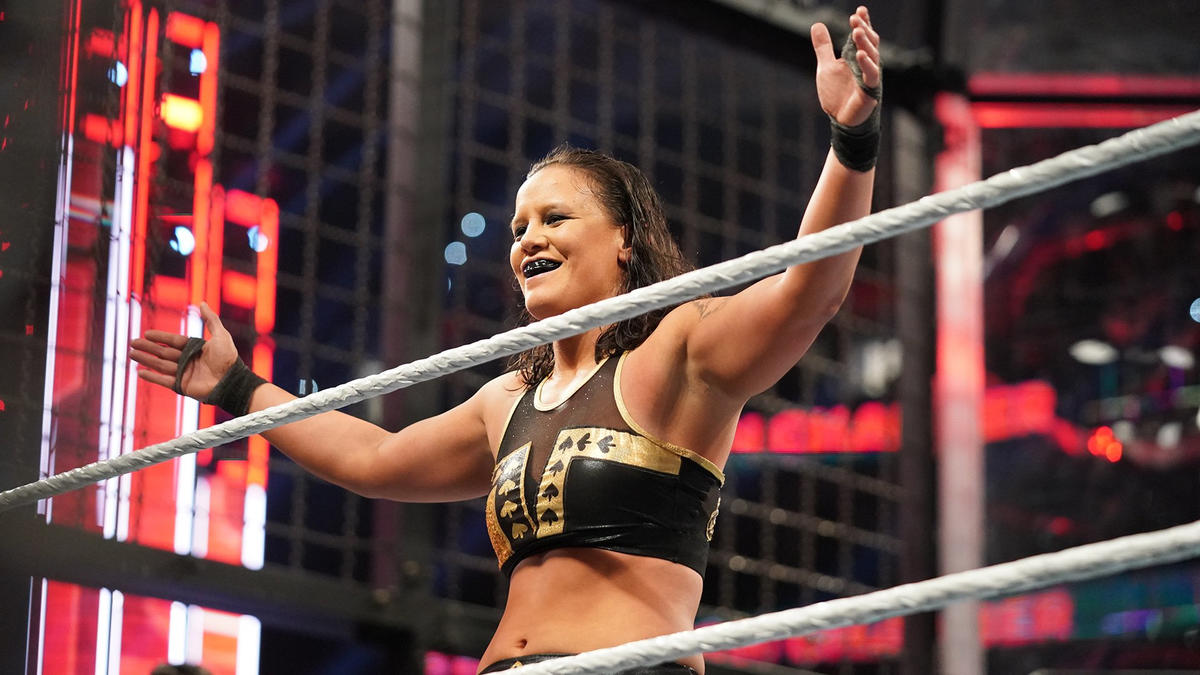