The 2020 Elimination Chamber pay-per-view featured two Chamber matches with the men getting a tag team title match while the women got to main event the show. This review is for the tag team match.

This event took place in March 2020, which is the month when a lot of things changed in the world due to the Coronavirus pandemic causing a lot of things to shut down. This was WWE’s last regular PPV with a full crowd for over a year.

The six teams entered for the Smackdown Tag Team Title match inside the Elimination Chamber. We know Ziggler and Roode will enter last. The New Day and The Usos will start the match. The entrances took about ten minutes or at least it felt that long. 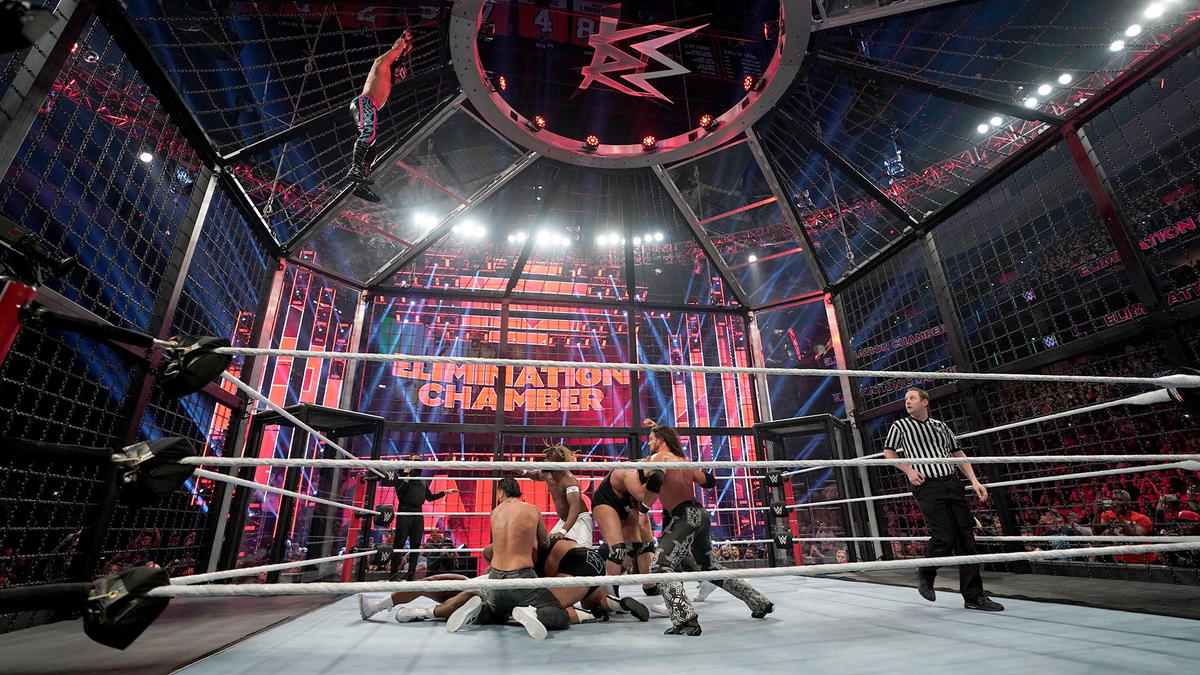 Elimination Chamber Match for the Smackdown Tag Team Championships: The Miz and John Morrison vs. Dolph Ziggler and Robert Roode vs. Lucha House Party (Gran Metalik and Lince Dorado) vs. Heavy Machinery (Tucker and Otis) vs. The New Day (Kofi Kingston and Big E) vs. The Usos (Jimmy and Jey Uso)

Two teams start in the ring, the other four teams are locked into pods until it is their time to enter the match.

Big E brawled with Jey against the turnbuckle while Kingston hit a jumping elbow on Jimmy for two. Jimmy with a monkey flip, but then Kingston got him with a dropkick. Big E with a shoulder tackle on Jey followed by the belly to belly. Jimmy wit ha cross body block off the top on Big E. Kingston went for a cross body block, he slipped off the top, so it was like a tackle on Jimmy. The Usos worked over Kingston with chops on the turnbuckle. Big E saved Kingston by tossing Jimmy out of the ring, but then Jimmy saved Jey from a double team move. The Usos backed away in one corner against New Day as the clock counted down for the third time in the match.

The next team to enter the match were Lucha House Party, so there were three babyface teams. Metalik jumped off the top on Big E and it was a slip, but it was sold like a tackle. Metalik with a kick to Jey, Dorado with a springboard Stunner and Metalik walked across Dorado’s shoulders for a splash that got a two count. Dorado and Metalik hit three straight moonsaults on Jimmy, but Jey saved his brother to avoid the elimination. Big E launched both LHP guys over the top onto the mats outside the cage. It used to be steel there, but they replaced it with padding several years ago. Big E launched Kingston onto the LHP guys on the mats. They sent Big E out of the ring. Jey shoved Dorado towards the cage and Dorado managed to hang on against the cage. Dorado went up on a pod, The Usos were knocked down going after him and Kingston went after Dorado. Metalik attack Kingston up there. Dorado hit a cross body block on both Usos on the mats and Metalik with a somersault dive on the New Day guys in the ring.

The Heavy Machinery team of Otis and Tucker were next with each guy hitting shoulder tackles to knock everybody down. Both Usos were sent out of the ring, so Heavy Machinery splashed The Usos into the cage about six times. Dorado was up top, then he went onto the pod and Tucker hit a sidewalk slam on Metalik. Heavy Machinery hit a double team splash on Big E. Otis hit his Caterpillar walk into an elbow drop on Big E and that got a two count. There were a bunch of guys brawling in the ring, Dorado was climbing at the top of the chamber and he spun around leading to a diving attack on the pile of wrestlers. That was awesome! Heavy Machinery hit the Trash Compactor on Metalik to eliminate his team after Otis pinned Metalik.

The clock went down to zero leading to Tucker and Otis facing off with Ziggler and Roode. Miz and Morrison saved their fellow heels. Ziggler and Miz sent Otis into the cage while Morrison and Roode pounded on Tucker in the ring. Otis and Tucker managed to take control by knocking the heel s down. Ziggler climbed up the cage to avoid Otis, so Tucker climbed up the other side of the cage to go after Ziggler Tucker tossed Ziggler into the glass. Tucker tossed Ziggler off the cage and Otis sent Ziggler throat first across the top rope. Tucker did a somersault off the top of the pod onto The New Day and Usos on the mat. That was impressive for a 320 pound guy like Tucker. Tucker fought off a double team from Ziggler and Roode as he knocked both guys down with clotheslines. Roode wanted a Glorious DDT, but Otis gave him a back drop on the mat outside the ring. Otis ran at Ziggler, who moved and Otis went through the pod as well as out of the door on the other side of the pod! Otis went tumbling to the floor. Otis sold it like he was hurt on the floor while Tucker tried to tell him to get up, but Otis wasn’t able to do it. Tucker went after Roode and Ziggler, but Ziggler kicked him to drop him to the knees. Ziggler managed to hit a superkick on Tucker and Roode hit a Glorious DDT on Tucker to eliminate Heavy Machinery. The crowd booed that because they loved Heavy Machinery.

Otis was helped to the back while Ziggler and Roode celebrated their elimination. Kingston with the Trouble in Paradise kick on Ziggler and Big E with a Big Ending on Roode. The Usos each went up top and jumped off with Uso Splashes as they pinned Ziggler/Roode at the same time to eliminate Ziggler and Roode.

Dolph Ziggler and Robert Roode eliminated by The Usos 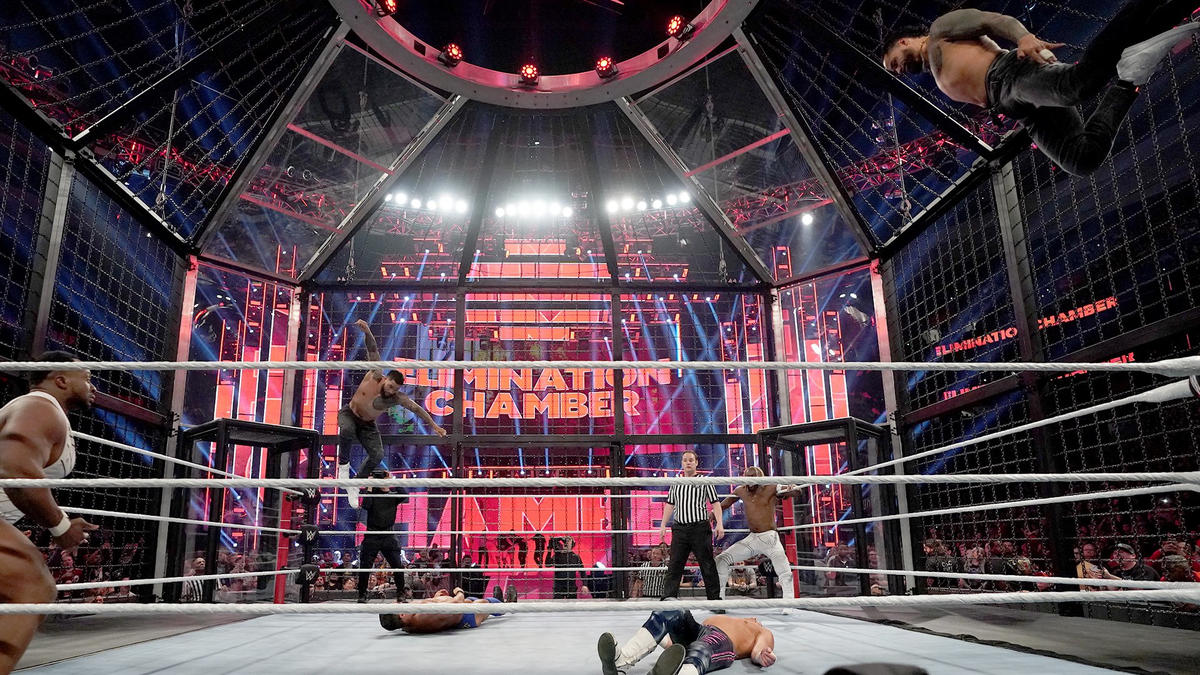 There are three teams left: The New Day, The Usos and the championship team Morrison/Miz. New Day and Usos stood side by side to show that they wanted to work together against Miz and Morrison. The two face teams stomped away on the champions. Morrison and Miz were tossed over the top to the match. There were superkicks that knocked down Big E and Jey. Jimmy launched Kingston into the air for a Samoan Drop by Jey. Big E with a uranage on Jimmy and Jey with a Samoan Drop on Big E for two. Kingston went up top, then to the top of the pod and Kingston jumped off with a cross body block, but Jey moved. Kingston hit the mat hard, so Morrison and Miz covered Kingston at the same time to eliminate him.

The New Day eliminated by The Miz and John Morrison

The final two teams faced off with both Usos hitting double superkicks on Miz and Morrison. The Usos went up top, Jimmy hit his splash on Morrison and Miz countered the pin attempt by Jey, so each team got a two count. Miz wanted a Figure Four Leglock, that was countered and Miz hit a Skull Crushing Finale for two as Jimmy kicked out. Miz slapped on the Figure Four Leglock on Jimmy while Morrison hit Starship Pain on Jimmy for two. Jey with a rollup on Morrison, then Jey hit superkicks on both champions and got a pin attempt on Morrison for a two count. Morrison got a jackknife cover on Jey and Miz covered using the ropes, which is legal so Miz/Morrison pinned Jey at the same time and got the pinfall win at 32:57.

The Usos eliminated by The Miz and John Morrison

Winners: The Miz and John Morrison

Analysis: ***3/4 I thought it was a very good match with some very creative crazy spots. Some of those spots were Dorado hitting a SSP off the top of the Elimination Chamber, Tucker’s dive off the pod, others going off the pod and Otis went crashing through a pod to the floor. The fans were really into the match with Heavy Machinery out there, so it’s fair to say that Otis has the fans in his corner for the rivalry with Ziggler. If you read our PPV preview then you know I picked Miz and Morrison to win, plus Usos to start and make it to the finish before losing. Good call by me. It was a well booked match. 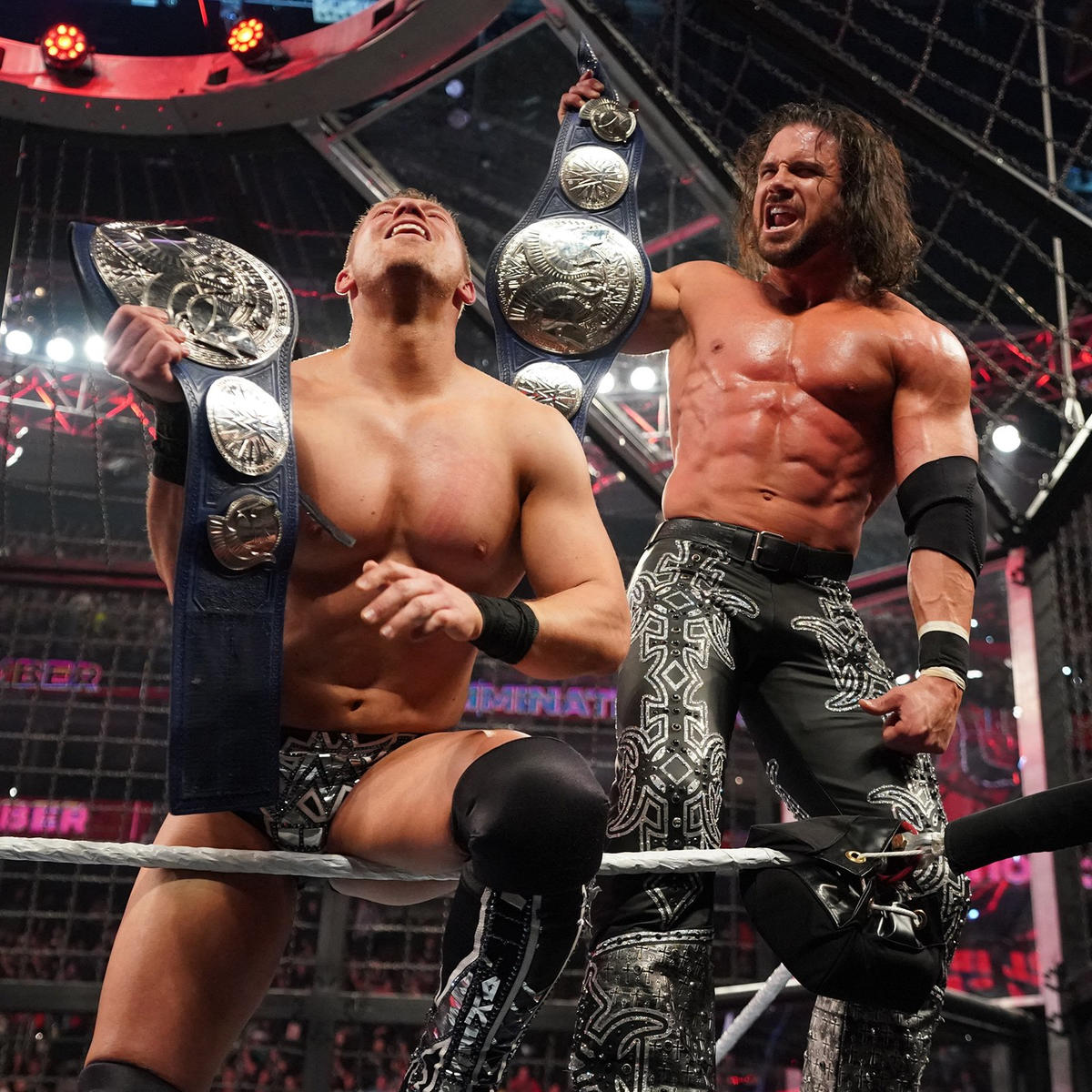