This was written live on the day of the show. 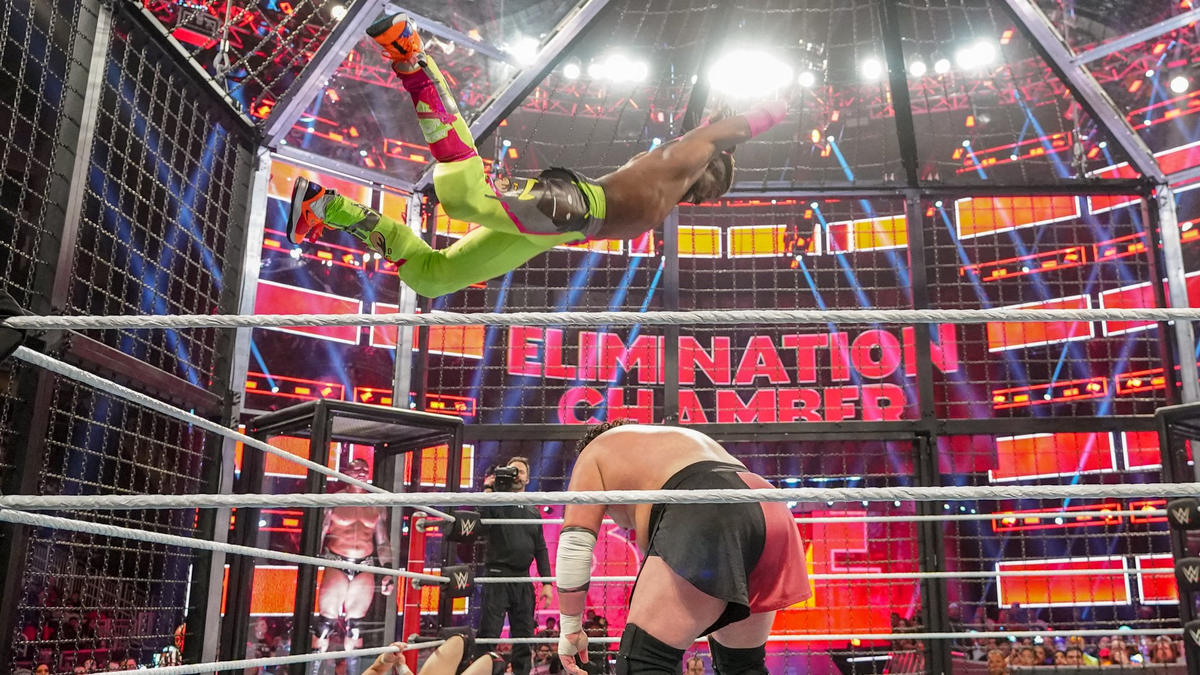 The introductions took place for the Elimination Chamber match: Kofi Kingston was first, Jeff Hardy in blue/white face paint, Randy Orton (#6 in the match) entering his 7th Chamber match and AJ Styles was the last man to enter one of the pods.

Bryan was booed by the fans while saying that he is being punished by management for making the fans the authority. Bryan complained about being first in the Elimination Chamber (fickle!), first in the gauntlet (fickle!) and referees ordered that Rowan has to go to the back. Bryan said he didn’t want us to call him a martyr, but he is suffering for the greater good while the small-minded people repeat one stupid phrase over and over again while fans chanted “What?” at him. Bryan said that the people and the planet need him. He said that there is still hope that Bryan will raise the beautiful championship and still be the WWE Champion. Bryan took his time getting into the ring.

Analysis: Bryan has become my favorite promo guy in WWE. He’s so great at these heel promos. 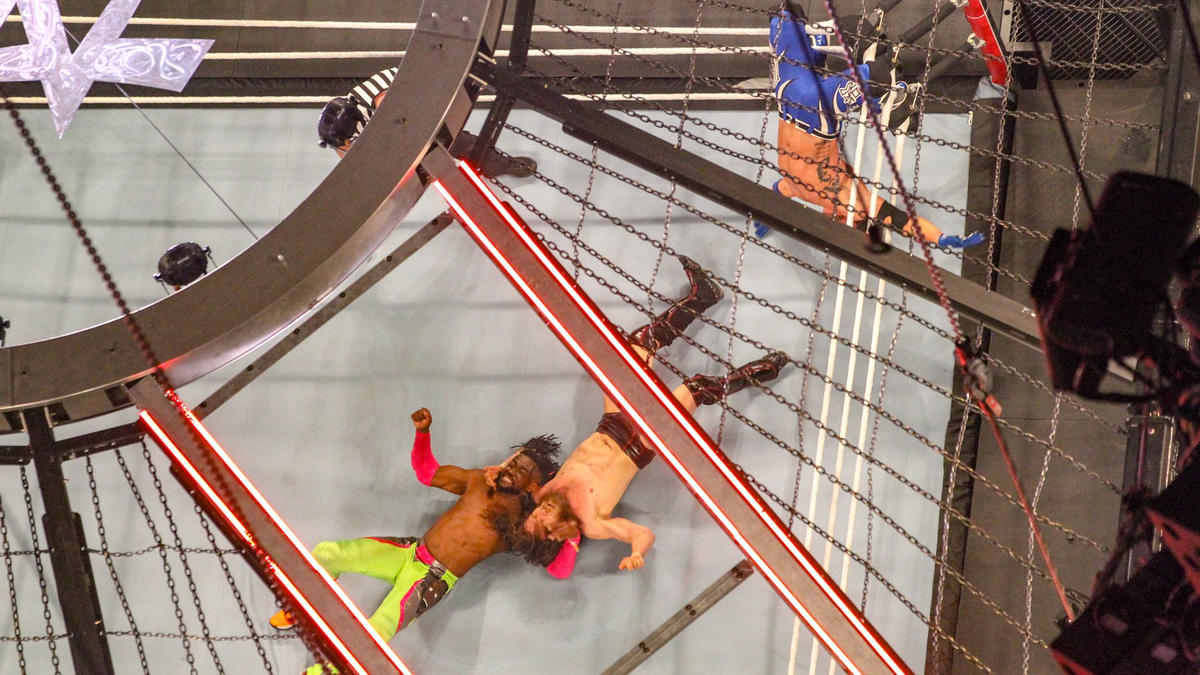 Bryan tried to get away from Joe, but he wasn’t able to get too far because there was nowhere to run inside the chamber. Joe worked over Bryan with chops, he slapped on a Boston Crab submission, then a crossface submission and Joe pulled back on the arm of Bryan. Bryan managed to come back with a kick to the knee of Joe. Bryan whipped Joe into the edge of the pod. They got into a slugfest with Bryan hitting Joe with chops, but when Joe came back with chops on his own, Bryan had big red marks on his chest. Bryan sent Joe into the turnbuckle. The five minutes were up and it’s onto the next entrant.

The third man to enter was Kofi Kingston with kicks, a jumping attack on Bryan and he wanted a DDT on Joe, but Joe fought it off. Kingston with a jumping kick to the face of Joe and up top with a Frog Splash to the back of Joe for a two count. Bryan suplexed Kingston onto the top rope and Bryan went up with a jumping knee attack to the back of Kofi’s neck for a two count. Joe decked Bryan with another hard chop to the chest. Bryan climbed the empty pod and sat on it to get away from Joe. Kingston got away from Joe, he jumped onto the pod that Bryan was on and punched him repeatedly. Bryan and Kingston walked across the crossbeams, Joe went after them, Kingston kicked Joe down and Kingston did a trust fall dive off the cage onto Joe and Bryan! That was a big fall as fans chanted “Kofi” for him. Bryan ran the ropes, Kingston with a leapfrog and a back elbow by Kingston on Bryan got a two count. Joe with a senton splash on Bryan’s back. Joe with a snap suplex on Kingston for two. Joe with more chops to the chest of Bryan.

It’s AJ Styles as the fourth man in the match. Styles unloaded on everybody with strikes including a clothesline on Joe. Styles with an elbow to the face and he hit a reverse DDT on Bryan and a regular DDT on Kingston at the same time for two counts on each man. The fans chanted “AJ Styles” for the former WWE Champion. Styles with a forearm smash to Joe. Bryan was climbing the chamber again, Styles saw him and Styles hit a Phenomenal Forearm to the back of Bryan to knock him down. Kingston blocked a Styles Clash with a kick to the head and Styles hit an Ushigoroshi knee to the back of Kingston’s neck for two. Joe whipped Styles into the steel cage and hit a back body drop. Joe caught Kingston into a Coquina Clutch submission, but Kingston countered into a pin for two. Styles got back into it with a Phenomenal Forearm on Joe to pin and eliminate him. It’s time for the fifth man.

Jeff Hardy entered to a decent pop as the fifth man in the match. Hardy with a double leg drop and a low dropkick on Styles. Bryan back in, Hardy kicked him out of the ring. Hardy with a front suplex on Kingston. Hardy jumped on Kingston’s back and over the top onto Bryan on the outside of the chamber. Styles with a Pele Kick on Hardy. Bryan whipped Kingston into the cage a few times. Hardy and Styles battled on the top rope with Styles hitting his waist on the top rope. Bryan was working over the arm of Kingston. Hardy put Styles on the top turnbuckle and Hardy hit a Swanton Bomb on Styles. Bryan went back into the ring with a running knee on Hardy to pin and eliminate him.

Analysis: That was a great elimination with Bryan capitalizing on the situation as soon as Hardy got back to his feet. They timed it really well.

Bryan put Styles upside down against the turnbuckle and hit a running dropkick on him. Bryan went for a superplex on Kingston, but Styles curled himself back up and hit a German Suplex on Bryan, who suplexed Kingston in a unique Tower of Doom spot. The buzzer went off for the last man in the match.

Randy Orton entered as the final man while the other three guys were down in precarious positions. Orton slowly worked over everybody a bit. Kingston managed to take down Orton with a dropkick and Styles hit a modified backbreaker on Kingston. Styles with a forearm on Kingston. Styles was going for a Phenomenal Forearm, he went to the top and Orton hit an RKO on Styles to pin him. Great spot.

Analysis: The rumor is Styles vs. Orton at WrestleMania, so maybe they will use that elimination to start the setup for that.

Kingston with a rollup for two on Orton. When Kingston went up top, Orton tripped up Kingston to crotch him and Orton hit a draping DDT off the top rope. Orton managed to hit a belly-to-belly slam on Bryan. Orton wanted an RKO on Kingston, but Kofi pushed him off and Kingston hit a Trouble in Paradise kick on Orton and pinned him to eliminate him. That drew a big pop. 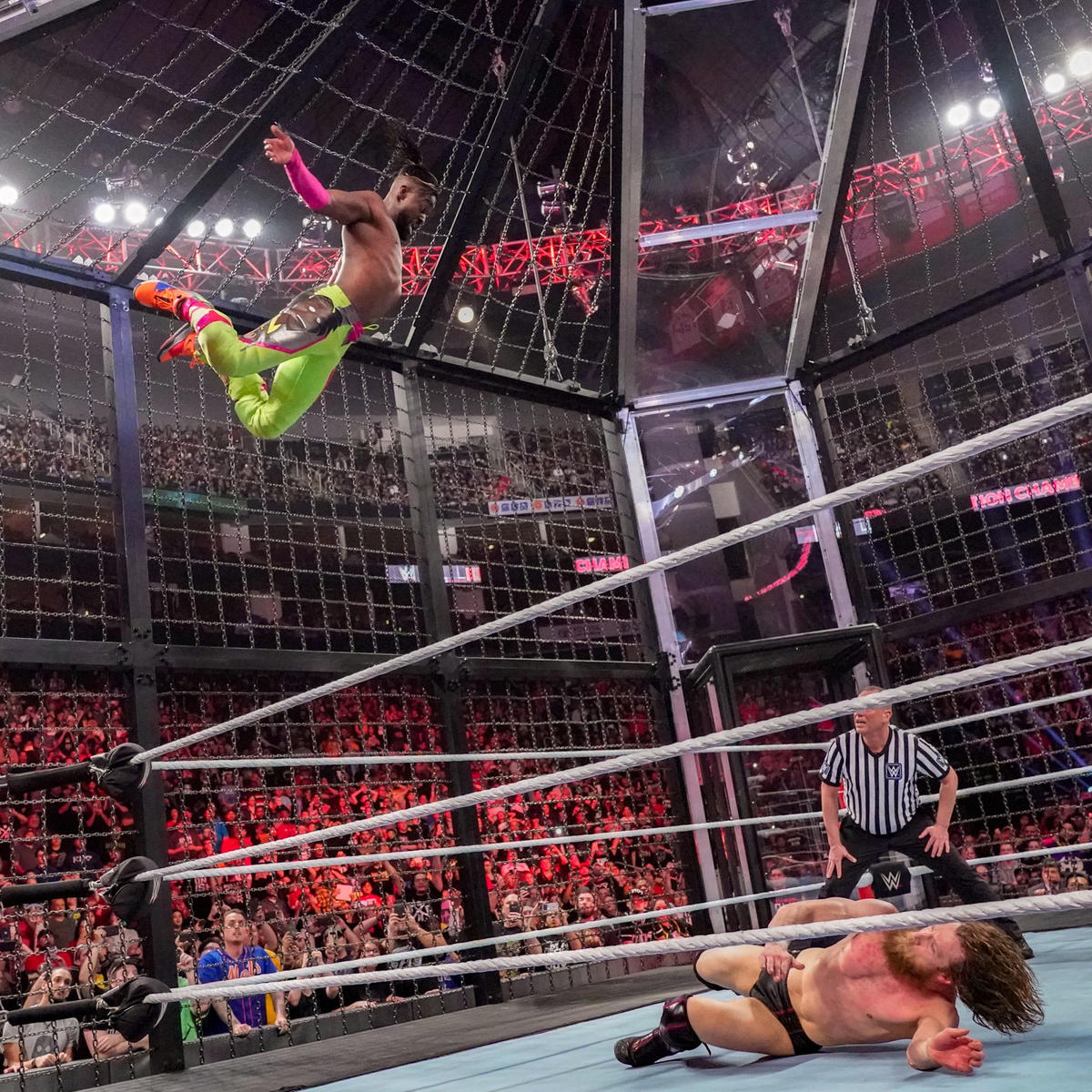 Bryan and Kingston had a long staredown as the final two in the match. Kingston went for a Trouble in Paradise kick, Bryan ducked it and hit a dropkick to the legs. Bryan with the kicks to the chest and Kingston managed to hit the SOS for a two count. The crowd is fully behind Kingston and thought that was it, but it was just a two count. The crowd was loud in their support for Kingston with “New Day rocks” chants as Graves said that the world is believing in Kofi Kingston. Bryan worked over Kingston with more kicks and Bryan hit three running dropkicks. Bryan with a fourth running dropkick. Kingston out of the corner with a double foot stomp to the chest for a two count. Bryan rolled under the bottom rope to get out of the ring. Kingston sent Bryan face first into the chamber about six times. The crowd was loving it. Kingston tried to send Bryan into the pod, but Bryan lifted him and sent Kingston hard into the pod, which led to a loud crash as Kingston’s legs took the brunt of that blow and a rough landing on the back/head for Kingston too. With Kingston staggering in the ring, Bryan hit the running knee to the face for a two count, which drew huge cheers and Bryan had a stunned look on his face. Bryan stomped on Kingston’s face. Bryan charged in, Kingston hit Trouble in Paradise and Bryan got a cradle for two, but the director cut away to the crowd for some reason! That was dumb. Anyway, Bryan got a two count out of that. Bryan went for a LeBell Lock submission, but he couldn’t get it locked in and Kingston got to the ropes while Bryan released the submission. I think Bryan released it because he was tired, not just because Kingston got to the ropes.

Bryan went up top and Kingston tripped him up. The crowd chanted “this is awesome” and “Kofi” for Kingston. Bryan went up to the top of a pod, so Kingston went after him. Kingston sent the back of Bryan’s head into the chamber walls a few times. Kingston teased a suplex off the top of the pod, but Bryan blocked it. Bryan turned it around, he sent Kingston’s head into the glass of the cage. Bryan was kicked off the pod, Bryan was on the top turnbuckle and Kofi kicked him into the ring. Kingston was on top of the pod and he jumped off with a splash, but Bryan moved out of the way leading to Kingston hitting the mat hard! Bryan hit the running knee to the face again and Kingston did a flip bump. Bryan pinned Kingston to retain his title after 36:40. Great final two sequence!

Analysis: ****1/2 That was an excellent match and one of the best Elimination Chamber matches there has ever been thanks to the performance of Bryan and Kingston. The others were not really booked as threats to win, but that’s okay because it made the performances of Bryan and Kingston stand out more. It was such a cool atmosphere to see the crowd cheering so loudly for Kingston in a way that I have never heard for him. They were popping for all of his spots that always get nearfalls, yet for some reason, the fans thought maybe he could do it this time. That’s great storytelling. It worked because of how well Bryan sold for him, how Bryan took a beating to put over Kingston and then Bryan outsmarted him after Kingston made the mistake on the dive off the pod. Bryan’s the crafty heel that didn’t need to cheat this time. I loved the way he was booked as the focal point of the match that found a way to win clean.

Bryan left the ring with the WWE Title in his hands while Rowan showed up to help him to the back.

Kingston was alone in the ring with his buddies Big E and Xavier Woods helped him. The fans chanted “Thank You Kofi” and Big E told Kingston he deserved that. Woods and Big E embraced Kingston in the ring while the fans gave Kingston a standing ovation. Kingston sat on the steps of the Chamber for a bit to think about what happened while Big E and Woods were right there with him. They walked up the ramp, they turned back to face the crowd and the fans chanted “Kofi” one more time.

Analysis: If the Bryan vs. Kingston rivalry doesn’t continue I’ll be disappointed. I’d love to see it as a singles match at WrestleMania. Why not? Kofi has earned it. The fans are behind the guy. Give him a chance at the biggest show of the year. What’s interesting is that as of Tuesday last week, Mustafa Ali was in the match and Kingston replaced him, so would Ali have gotten this same spot at Elimination Chamber? Maybe. I think Kingston has earned this spot and I hope there are better things ahead for him.

(Those were my initial thoughts at the time. Obviously, WWE decided to back Kofi further since he beat Bryan for the WWE Title at WrestleMania 35. I loved that match.) 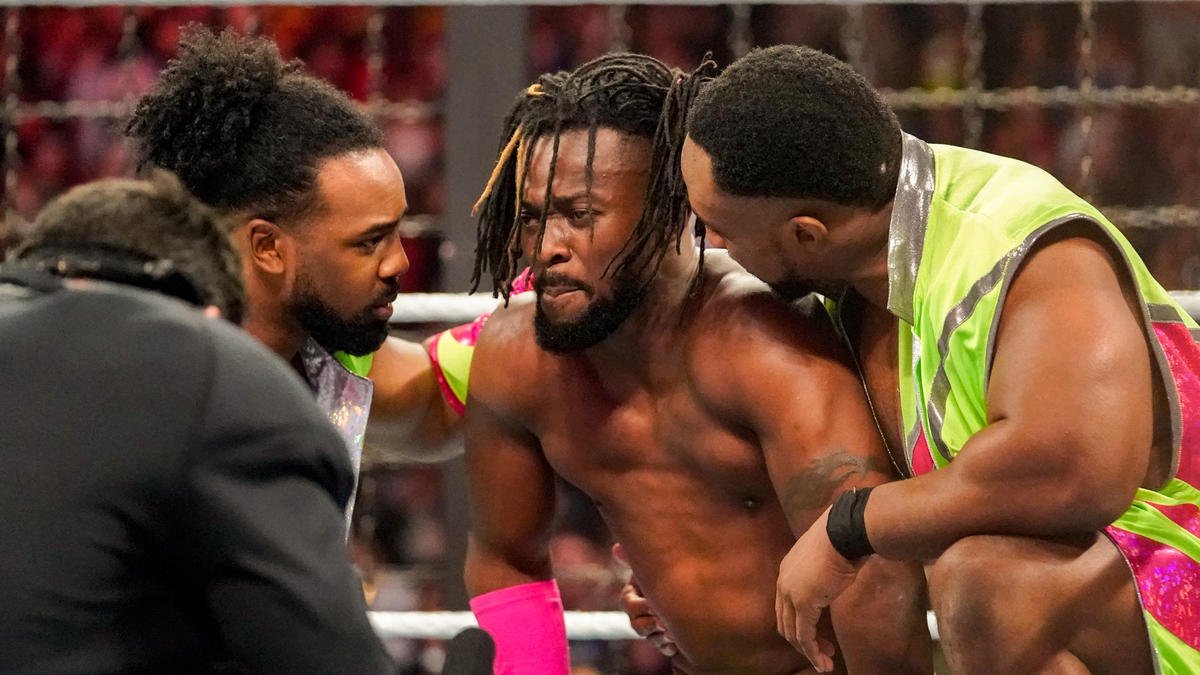