The women’s Elimination Chamber match in 2019 was a history maker because it was for the brand new Women’s Tag Team Titles that WWE announced in late 2018.

It was a big match because fans were excited about the women’s division adding tag team titles to the division. To WWE’s credit, they actually did a nice job of building teams to be a part of the match as well.

This was written live on the night it took place.

The team of Naomi and Carmella (settle down, Corey) entered first in matching green glow outfits. The Tag Team Titles were at ringside.

The announce team for the Women’s Tag Team Titles match is Michael Cole, Corey Graves, Renee Young and Beth Phoenix as a guest commentator for this match. The team of Liv Morgan and Sarah Logan entered. The Spanish announcers were shown at ringside. Peyton Royce and Billie Kay aka The IIconics made their entrance. Peyton’s hair is more of a brown color instead of black like Kay’s hair. Yes, I looked at her hair. That’s reporting. The German announce team was shown at ringside. Nia Jax and Tamina were up next as the fourth team that will be locked into a pod to start the match.

The team of Sonya Deville and Mandy Rose were up next as one of the two teams that will start the match since they lost on Smackdown. The final team is Sasha Banks and Bayley, who are in an opening spot because they lost a match on Raw. 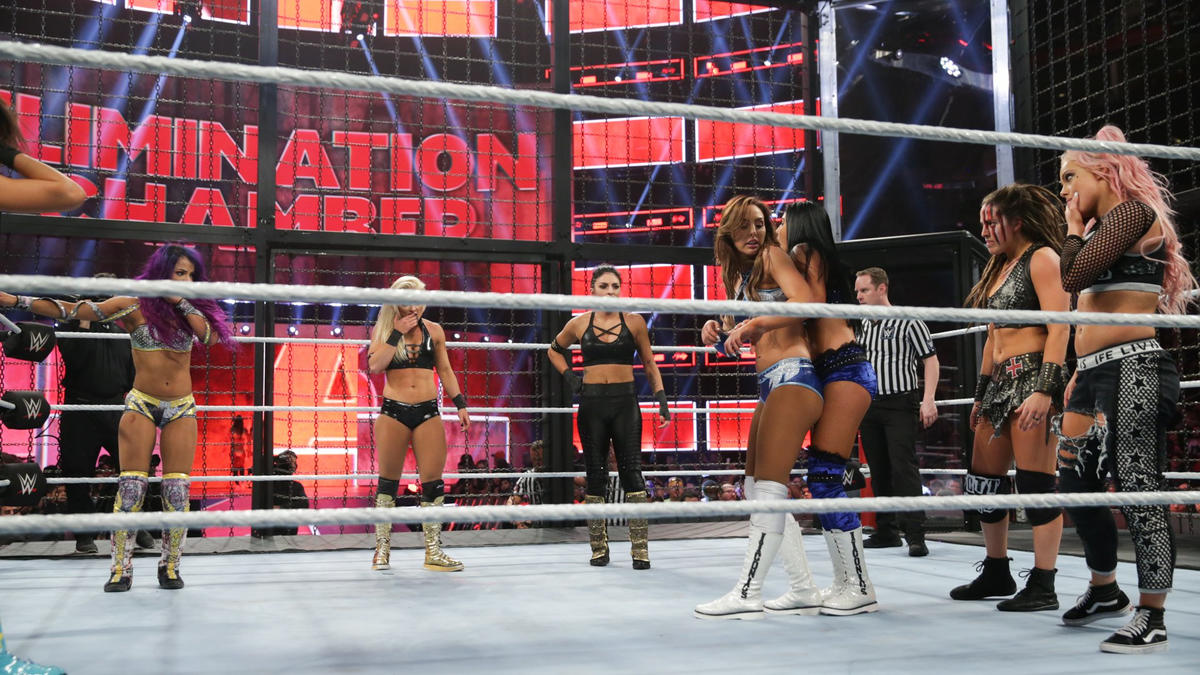 Elimination Chamber Match for the New Women’s Tag Team Titles: Sasha Banks and Bayley vs. Mandy Rose and Sonya Deville vs. Nia Jax and Tamina vs. Peyton Royce and Billie Kay vs. Naomi and Carmella vs. Liv Morgan and Sarah Logan

A team is eliminated if one member of the team gets pinned or submitted.

The teams of Bayley/Banks and Deville/Rose started the match with Banks and Bayley getting control with running knee attacks. Double neckbreaker by Bayley and Banks on the ropes. Banks hit a cross body block onto Deville/Rose on the mats outside the ring. Deville came back with a slam on Banks off the turnbuckle. Rose with a backbreaker on Bayley for a two count. When Graves talked about Mandy, Renee said it’s a little uncomfortable. Oh yeah, it sure is. The women battled on the mats outside the ring with Deville sending Bayley into the side of the chamber. They did a spot where Mandy’s foot was against the chamber and Bayley hit a neckbreaker.

The next team entered after five minutes of action: Morgan and Logan. There was a running knee by Logan on Banks against the cage. Logan whipped Banks’ hand into the pod and a headbutt to Bayley. The Deville/Rose and Morgan/Logan teams got into a slugfest with Deville hitting a knee on Logan after Morgan knocked down Rose. Hard slap to the face by Morgan on Deville. There was a kick to the face from Deville to put down Logan. All six women were down until Bayley got a two count on Morgan. Bayley was on fire with a clothesline and a belly to back suplex. They did a Tower of Doom spot out of the corner with Bayley taking a superplex and two of the girls were taken down with powerbombs. Everybody was down. The clock ticked down again although it wasn’t five minutes this time. It was about four minutes.

The duo of Royce and Kay covered everybody in the ring for multiple two counts. They complained to the referee about it. Royce and Kay whipped a couple girls into turnbuckles, double knees to rose and a front suplex on Deville. The IIconics pulled Rose and Logan off the ropes to slam them down. Banks was still out by one of the pods as Royce hit a knee on Bayley and then Banks showed up to save Bayley. Banks was favoring a left arm/shoulder injury while having tape on her shoulder. Banks was driven into the knee of Kay and a spin kick from Royce got two. The IIconics continued to attack Bayley and Banks on the mats outside the ring with Royce hitting a dive onto Bayley. The clock ticked down again 13 minutes into the match.

It’s Naomi and Carmella as the fifth team in the match. Naomi with a springboard cross body block on the IIconics. Carmella and Naomi hit bronco busters on the other women in the ring. Naomi hit a jumping kick on Royce. Kay and Carmella climbed the cage for some reason, Kay grabbed her and Carmella hit a flying headscissors that sent Kaye into a pod. Superkick by Carmella on Logan and Naomi with a split legged moonsault on Logan for two. Carmella cross body block on Logan, Bayley with a belly to back suplex on Carmella. Royce with a Gory Special on Banks, Morgan with a running knee and Rose slammed Morgan down. Logan with a Fisherman’s Suplex on Rose, Deville with a Spear on Logan and Carmella with a superkick. That was a lot with everybody hitting a move and then taking a bump. Everybody was down around the ring. Naomi and Rose got into a stand off with Naomi hitting her Rear View attack on Rose. Kay and Royce double-teamed and pinned Naomi at the same time to eliminate her.

Carmella and Naomi eliminated by The IIconics

Morgan and Logan went after Jax and Tamina with double team moves, but Jax broke up a pin attempt. Deville with kicks on Jax and Rose with a running knee on Jax. Bayley and Banks got back into it with punches. Bayley and Banks with knee attacks on Tamina. Double team slam by Bayley and Banks on Morgan and a double slam on Logan for a two count. Bayley did a slingshot on Deville that sent her into the turnbuckle and Rose moved even though it looked like the other girls wondered why she moved. Banks with a double stack double knee attack on Rose and Deville for a two count. Jax and Tamina put down Bayley and Banks with running body attacks. Logan and Morgan climbed a pod. Jax whipped Rose into the cage. That led to Logan and Morgan jumping off the pod with cross body blocks onto some of the girls and Logan got a two count on Deville. Jax hit a Samoan Drop on Morgan off the second rope. Tamina went up top for her shitty Superfly Splash to eliminate Logan and Morgan.

Analysis: The cross body blocks off the pods meant nothing since they lost like 30 seconds later.

They did a spot where Jax charged at Bayley, who moved and Jax went running through the glass off the pod. That drew a huge ovation and it was a loud noise. Banks hit the Meteora double knees on Tamina and Bayley hit the Elbow Drop off the top rope. All four women pinned Tamina, so her and Jax are out.

Nia Jax and Tamina eliminated by Bayley and Sasha Banks

Analysis: The spot with Jax running through the glass was typical for a Jax match where she always runs into a post.

The fans were chanting “yes” repeatedly as we are down to the final two teams: Banks and Bayley vs. Deville and Rose. They did a spot where Banks hit a Backstabber on Deville and Bayley hit the Bayley to Belly on Deville for a two count with Rose making the save at the last possible moment. The fans chanted “this is awesome” for them. Rose climbed the Chamber and got onto a pod with Banks and Bayley going after her. Bayley and Banks sent Rose back first into the glass. They teased a double suplex off the pod, which was unrealistic and Deville went to save her partner. Bayley kicked Deville down while Rose kicked Bayley down. Deville was tackled back first into the black support beam of the pod. Banks went down to check on Bayley, who sold it like she was in a lot of pain. Rose went up behind Banks and whipped her into a pod. Back in the ring, Rose hit her double underhook sitout slam for a two count as Banks kicked out. Deville went for a Spear on Banks, who moved and Deville ended up hitting the Spear on Rose. Banks went for the Bank Statement on Deville, but her arm was hurting, so she used the leg and Deville tapped out. Big pop for that. Banks and Bayley win at 33:10

Analysis: ***3/4 That was a really good Chamber match that was just under four stars out of five. Getting 34 minutes meant that they had a lot of time to tell a story and I liked the way Banks sold that shoulder injury right until the end of the match. I liked the way that Jax/Tamina were booked in a dominant way, then Tamina made a mistake and it cost her team the match because the other girls were smart enough to attack Tamina. It’s smart booking. That was the best match Rose/Deville have ever been a part of. I don’t say that because they are bad because I like their potential, but it’s the biggest match they have had and they did very well. Royce and Kay had some fun moments in there as well. I think the right team got the win because it’s smart to put over the babyface tag team of Bayley and Banks as the first champions for those new titles. That’s the right way to book it.

Banks and Bayley celebrated with the Women’s Tag Team Titles. Charly Caruso went into the ring with them. The fans gave them the “you deserve it” chant. Banks said that they are there for a purpose because they will continue to do what they do best. Banks said that they are the Boss N Hug Connection, your new WWE Women’s Tag Team Champions and they held up their titles. The fans cheered. Bayley and Banks hugged. 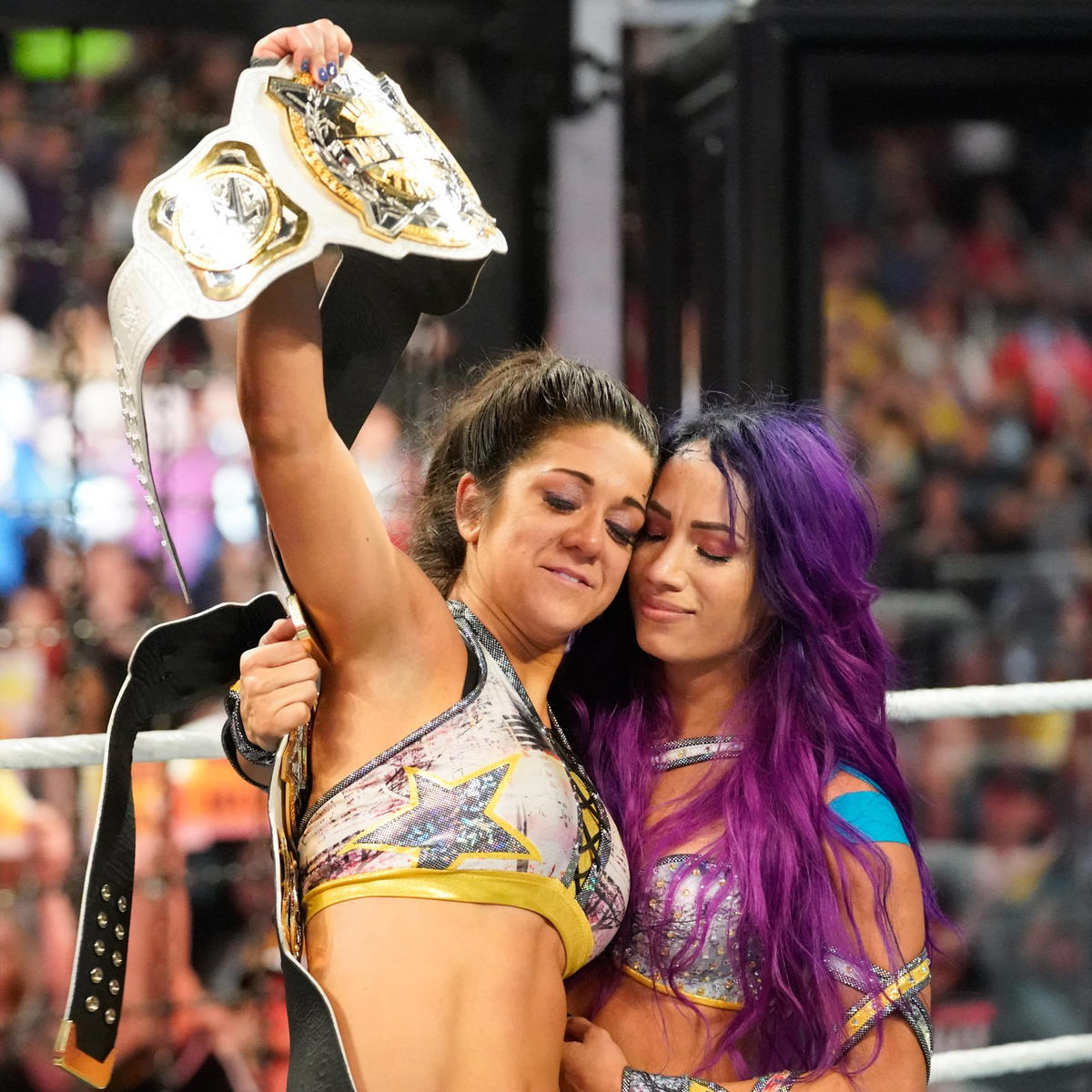