The men’s Elimination Chamber match in 2018 featured seven of WWE’s top superstars. It was a change from the traditional six-man Chamber match.

The winner of this match was rewarded with a Universal Championship match against Brock Lesnar at WrestleMania 34. I remember going into it knowing Reigns was going to win because we all knew the rumors were Lesnar vs. Reigns one more time, so it made Reigns the obvious choice to win this.

Anyway, this was written live the night it took place.

The rules were explained for the men’s Elimination Chamber. The difference is three guys start the match with four guys in the pod, so it’s a twist with the extra man.

Elias was in the ring for a pre-match song. We know he’s the seventh and final man to enter the match. Elias did his “who wants to walk with Elias?” bit to cheers. Elias had a good line about how it’s weird being inside the Chamber, but the fans are used to seeing somebody they love behind bars. Elias talked about how he’s going to win this and face Brock Lesnar at WrestleMania. Elias did his bit about how WWE stands for…and the fans chanted “walk with Elias” for him. Elias tried to sing his song, but the crowd booed him. Elias said maybe he won’t sing and he’ll go sit in his pod, which led to “yes” chants. Elias sang some more and Strowman’s entrance interrupted.

There was a big ovation for Braun Strowman’s entrance. Elias went into his pod quickly. Strowman went in another pod in the chamber. John Cena was the next man up with the usual mixed reaction for him. The announcers talked about how important this match is for Cena. Roman Reigns was up next as the fourth man that will be in a pod to start the match.

The Miz, the Intercontinental Champion, made his entrance. It was mentioned by Cole that Raw Talk would air on WWE Network after the show with Renee Young hosting with Peter Rosenberg and the guests are Stephanie McMahon as well as the winner of the men’s Chamber. Miz taunted all four guys in the pods as he got in the ring. Seth Rollins was up next with the announcers talking about his incredible 65-minute performance on Raw last week. Finn Balor was up as one of the three men to start the match. Balor had blue trunks and boots, so maybe he wants to be on Smackdown? Kidding. Maybe.

Analysis: From when Elias started singing to when the bell rang it took about 16 minutes. It felt like 45 minutes. 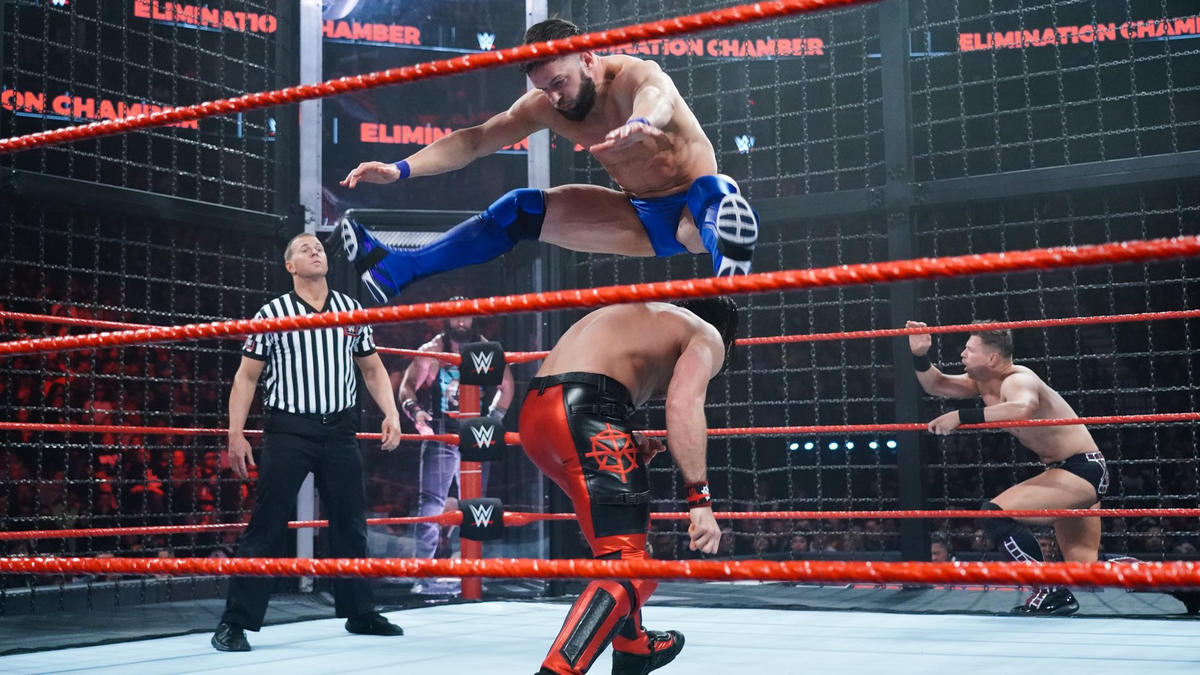 Elimination Chamber Match to Face Brock Lesnar For the Universal Championship at WrestleMania: The Miz vs. Seth Rollins vs. Finn Balor vs. John Cena vs. Roman Reigns vs. Braun Strowman vs. Elias

Balor and Rollins worked together at the start with a back elbow on Miz and then Balor tossed Miz out of the ring. Balor worked against Rollins with Balor hitting a dropkick on Rollins and a dropkick for Miz too. Miz missed a corner attack on Balor and Balor kicked Rollins in the back for a two count. Rollins came back with a knee to the ribs with Graves saying the pace a little slower than expected. All three guys did rollups for two counts. Rollins with a backbreaker on Balor. Rollins with a springboard clothesline on Miz, suplex on Miz and a Falcon Arrow suplex for a two count. Rollins hit a double Blockbuster on Miz and Balor at the same time as the clock counted down to zero.

John Cena is #4 in the match as he slowly walked out of the pod looking ready for Rollins. The fans were hot with the “Let’s go Cena/Cena Sucks” chants with Cena telling Rollins he isn’t going to do it tonight. Cena with the flying shoulder tackles, Rollins avoided the suplex, but Cena managed to hit the suplex. Rollins went for a kick, Cena avoided it and hit another suplex. Cena with a spinning suplex on Miz. Cena with the Five Knuckle Shuffle on both guys. Balor back in with a double foot stomp to Cena for two. Balor rollup on Miz for two followed by the Slingblade by Balor on Miz. Rollins nailed Balor with a superkick. Cena hit a splash on Rollins and Balor at the same time. Cena went for a double AA, he sent Rollins feet into Balor and Rollins hit an enziguri on Cena. Miz hit his backbreaker/neckbreaker on Rollins for a two count. The guys paired off with Rollins sending Miz into the cage while Balor stomped on Cena repeatedly. Miz with the corner clothesline on Rollins. Cena had Balor up for a superplex while Rollins had Miz up for a superplex and they did the superplexes back to back. All four guys were down as the clock counted down again.

Roman Reigns is #5 in the match with Cole calling him “the big dog” like usual. Reigns cleaned house with punches for Balor, Miz and Cena. Rollins and Reigns had a face off with Cole noting that Rollins beat Reigns in the gauntlet match on Monday. 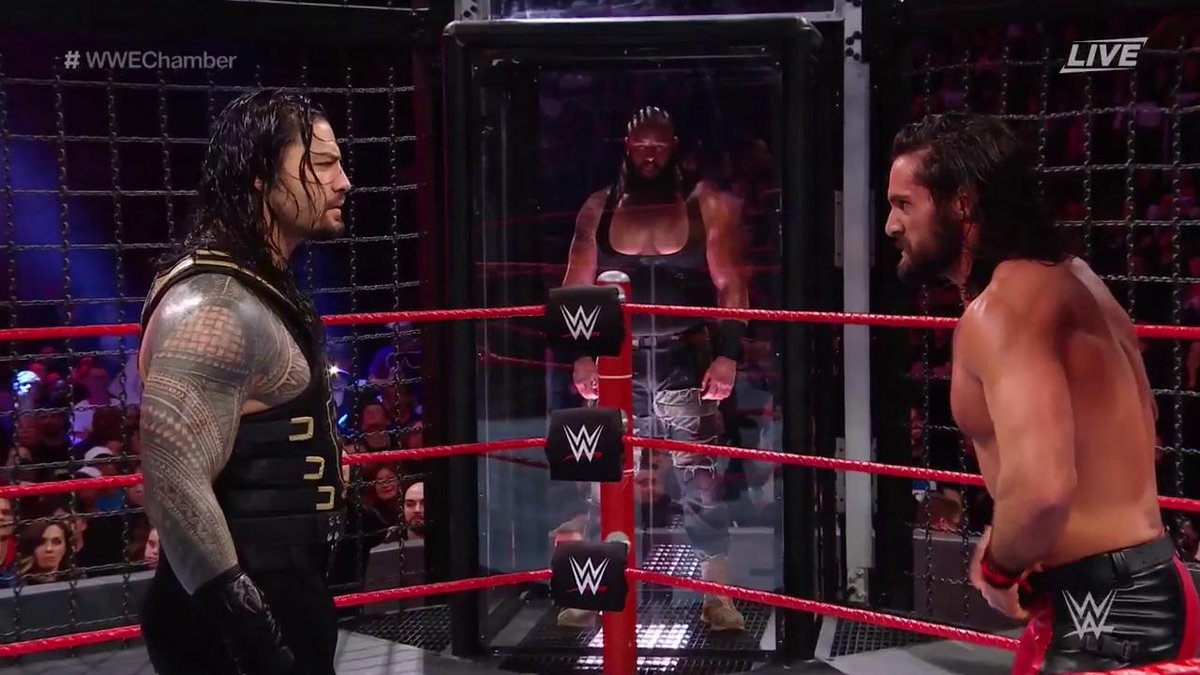 Miz shoved Reigns into Rollins and Miz hit a DDT on Rollins for two. The four faces were all on their knees as Miz tried to figure out who to kick, so they all just kneeled in front of Miz as he kicked all of them with more kicks for Reigns, but Reigns came back with three clotheslines on Miz. Balor hit a flying forearm to take down Reigns. Balor sent Rollins over the top rope onto the mat outside the ring. Reigns hit a clothesline on Balor for a two count. Reigns with corner clotheslines on Balor. Reigns nailed a one arm slam on Balor and a Samoan Drop on Cena. Reigns blocked a Miz kick and hit a Sitout Powerbomb. The fans chanted “get these hands” for Strowman. Reigns set up for a Superman Punch as the clock ticked down. Strowman is next.

Braun Strowman entered as #6 with strikes for everybody including except Miz, who ran away as much as he could. Cena held Strowman as Rollins punched Strowman. Double suplex was countered as Strowman hit a suplex on Cena and Rollins at the same time. Strowman caught Balor in his arms and tossed him into Reigns. Miz climbed on top of a pod to get away. Strowman climbed up after him. Strowman sent Miz face first into the side of the chamber. Strowman tossed Miz off the top of the pod onto the three guys that were already in the ring. Fans cheered loudly for Strowman. Strowman had a staredown with Elias. Strowman punched Miz in the chest to knock him down. Strowman punch to Reigns. Strowman tossed Rollins over the top onto the mat. Strowman picked up Miz and hit a Running Powerslam to pin Miz. It was just under 20 minutes as the clock ticked down.

The Miz eliminated by Braun Strowman

The buzzer went off as Elias stayed in his pod as #7 because he didn’t want to battle Strowman. That led to Reigns, Balor, Rollins and Cena working together to knock down Strowman with punches. Reigns wanted them to pick up Strowman, which led to Cena and Cena Roman working together to Powerbomb Strowman with Rollins and Balor assisting. Strowman kicked out. Cena covered with the Attitude Adjustment, but Strowman did a power kickout. Reigns with a Spear on Strowman for a two count. Rollins hit a Stomp on Strowman for a two count. Balor with a Coup de Gras on Strowman on the mat. Cena with the Attitude Adjustment on Reigns. Rollins kicked Cena. Balor with a Slingblade on Rollins. Elias finally got into the match with two counts on Rollins, Balor, Reigns and Cena consecutively. Elias with a running clothesline on Balor followed by a kick on Rollins and a jumping knee on Cena. Elias went up top with a Flying Elbow smash on Rollins for two. Elias countered a Reigns move and hit a sitout Powerbomb on Reigns for a two count. Strowman was back in, but Elias avoided an attack and Strowman hit his shoulder on the ring post. Elias tried to lift Strowman, that was a big mistake and Strowman hit a Running Powerslam on Elias to eliminate him around 25 minutes into the match, so Elias was only in there for about 5 minutes. 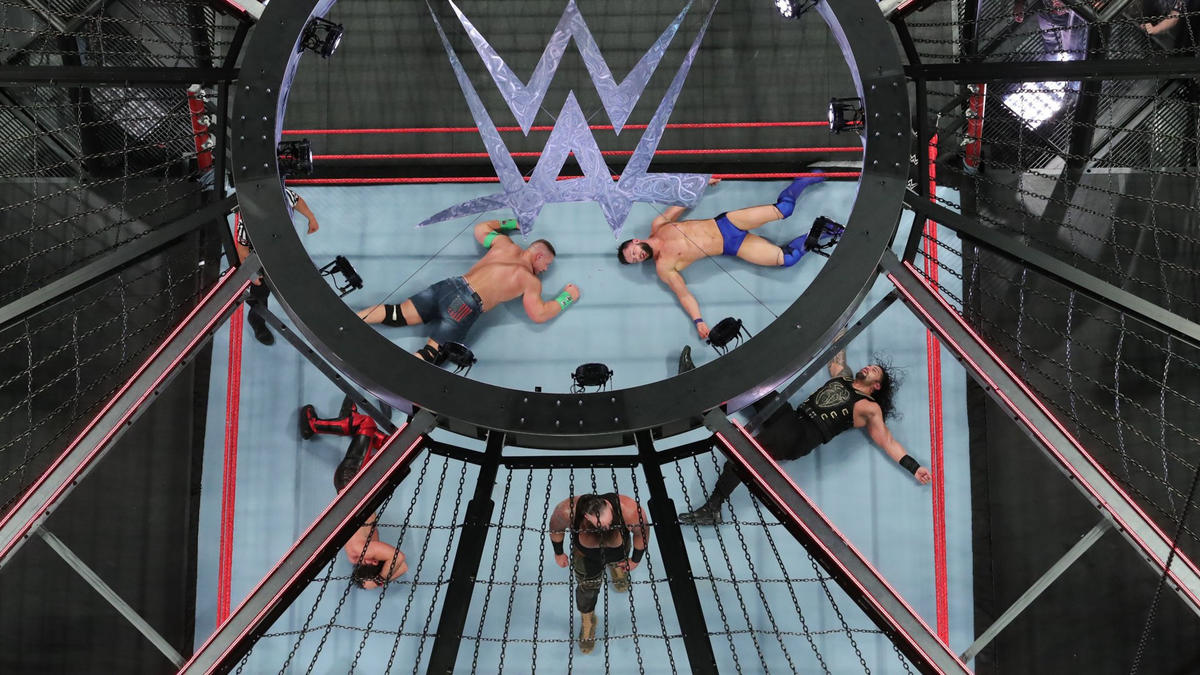 Analysis: That wasn’t much of a showing from Cena.

Strowman decked Reigns and Rollins with punches. Balor got in Strowman’s face, two boots to the face by Balor and a leaping kick to the face. Balor up top, Strowman grabbed him by the throat, but Balor broke free with a dropkick that sent Strowman to the corner. Balor with another dropkick that sent Strowman down. Balor up top with a Coup de Gras double foot stomp to the back of the head for a two count. Rollins battled with Rollins with each man hitting an overhead kick. Balor with the 1916 slam for a two count on Rollins. Balor with a Slingblade on Reigns followed by a dropkick that sent Reigns into the turnbuckle. Balor up top and he hit the Coup de Gras on Reigns. Strowman back in with a Running Powerslam on Balor to eliminate him.

It’s down to Reigns, Rollins and Strowman. Reigns and Rollins worked together by sending Strowman into the cage repeatedly. Rollins sent Reigns into the cage. Rollins with a clothesline on Reigns. They each countered move and Rollins hit a Buckle Bomb into the corner, but Reigns came back with a Superman Punch, so both of them were in the ring with Strowman down on the mat outside the ring. Rollins battled with Strowman with Rollins climbing up the chamber. Reigns walked over to them and hit a Samoan Drop on Strowman on the mat outside the ring. Strowman rolled into the ring. Rollins went to the top of one of the pods. Rollins stared at the WrestleMania sign. Rollins jumped off the pod with a perfect Frog Splash on Strowman for a two count. Great nearfall. Reigns got back to his feet and Strowman fought off the double team attempt with a dropkick that sent Reigns out of the ring. Rollins hit two superkicks to stagger Strowman. Rollins ran the ropes and Strowman hit a Running Powerslam on Rollins to eliminate him after 36 minutes.

Analysis: That is five eliminations by Strowman with the same move for each of them.

Analysis: **** I gave it four stars out of five. It was a very good match like most Chamber matches are because it’s easier to book a match like this when you go nearly 40 minutes with six pinfalls. The dominance by Strowman was the big story because he eliminated five guys with the same Running Powerslam. I’ve said in the past that it’s not the strongest finisher out there, but it’s a safe move and if you put it over as a tough move that others don’t kick out of them the move looks believable as a deadly finisher. I’m glad that Rollins got to be the Ironman match in terms of going the longest for 36 minutes. It would have been nice if he got to eliminate somebody as well, but obviously the booking was done to put Strowman over at the expense of others. The Reigns win was no surprise since he was expected to face Lesnar at WrestleMania going back to reports from last March, so of course he got the win.

Reigns celebrated the win with Cole saying that Reigns gets to finish what he started against Lesnar at WrestleMania three years ago.

Analysis: It gets Strowman some heat back after a loss. I don’t think it was necessary because Strowman was put over so much already in the match.

Strowman left the ring. Reigns was shown in the pod with the Wrestlemania sign in the background. 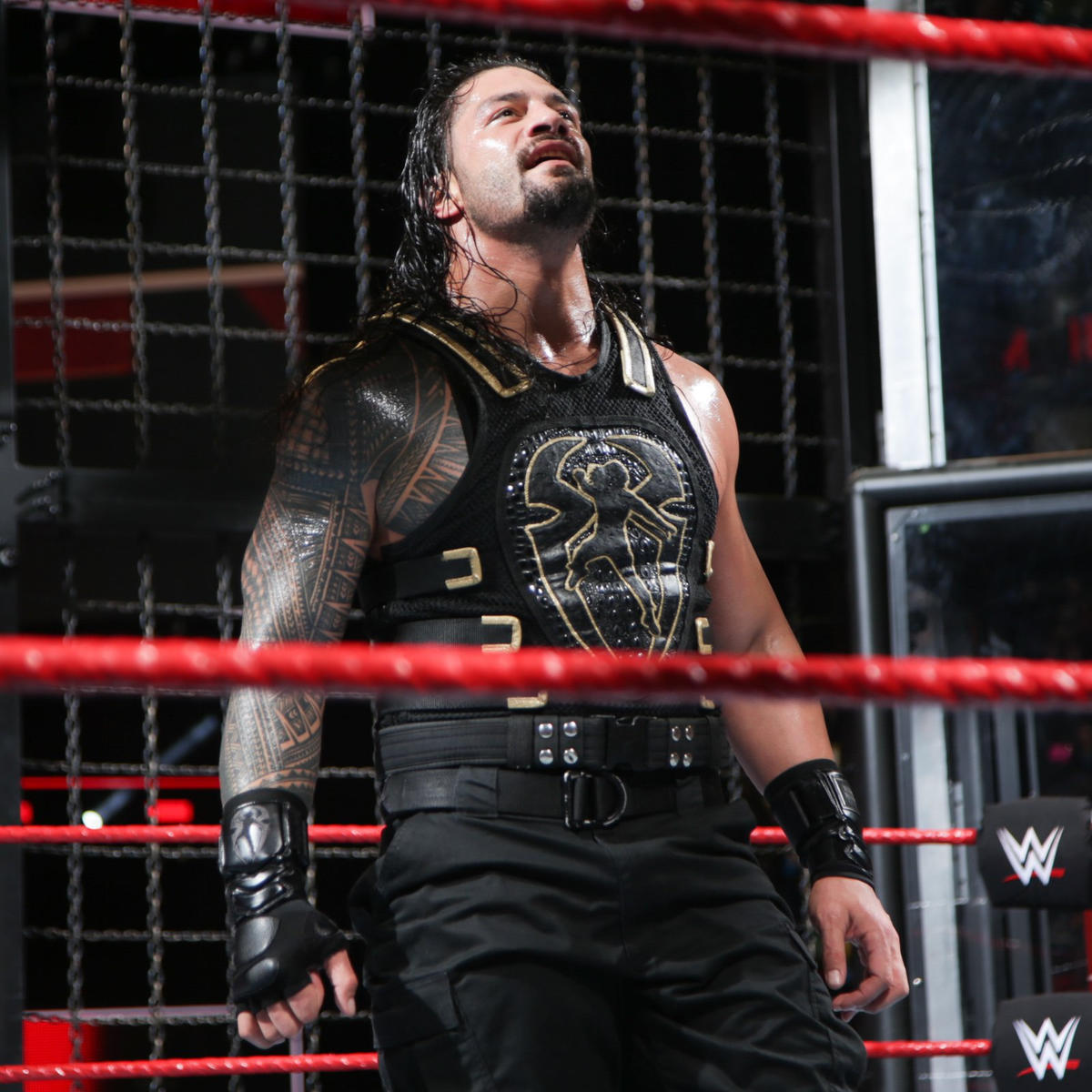