The year 2018 was a big one for firsts for the women’s division since they had the first women’s Royal Rumble in January 2018 and then later in the year they did WWE’s first-ever women’s only PPV called Evolution in October 2018. This was the ladies to show they could do it as good as well as the men.

Get familiar with the rules of Women's #EliminationChamber Match! #WWEChamberpic.twitter.com/InPbMGsK3D

Alexa Bliss walked out first. She is the Raw Women’s Champion and she made her way into one of the four Lexan pods. Bliss was in full “make an angry face” mode since she has to defend the title against five women. Cole mentioned Bliss has been champion for 181 days. I noted on Twitter earlier that her last title defense on PPV or television was October 30. Nearly four months between title defenses on TV or PPV. Bad booking.

Sasha Banks made her entrance with her purple hair. Cole noted that if Banks wins she is the fourth 5-time Women’s Champion in WWE history with Trish Stratus, Mickie James and Melina as the others with 5 or more.

Mickie James, my favorite in the match, made her entrance looking great like usual. She was wearing some Wonder Woman-style gear that was red and gold. She looks awesome of course.

The Absolution group of Sonya Deville and Mandy Rose walked out together along with Paige. Paige only went onto the stage and then she went to the back. Rose went into a pod, so Deville is starting the match.

Bayley was up last because she was starting the match. There was a good ovation for Bayley, who got into the ring and stared at all the other women. 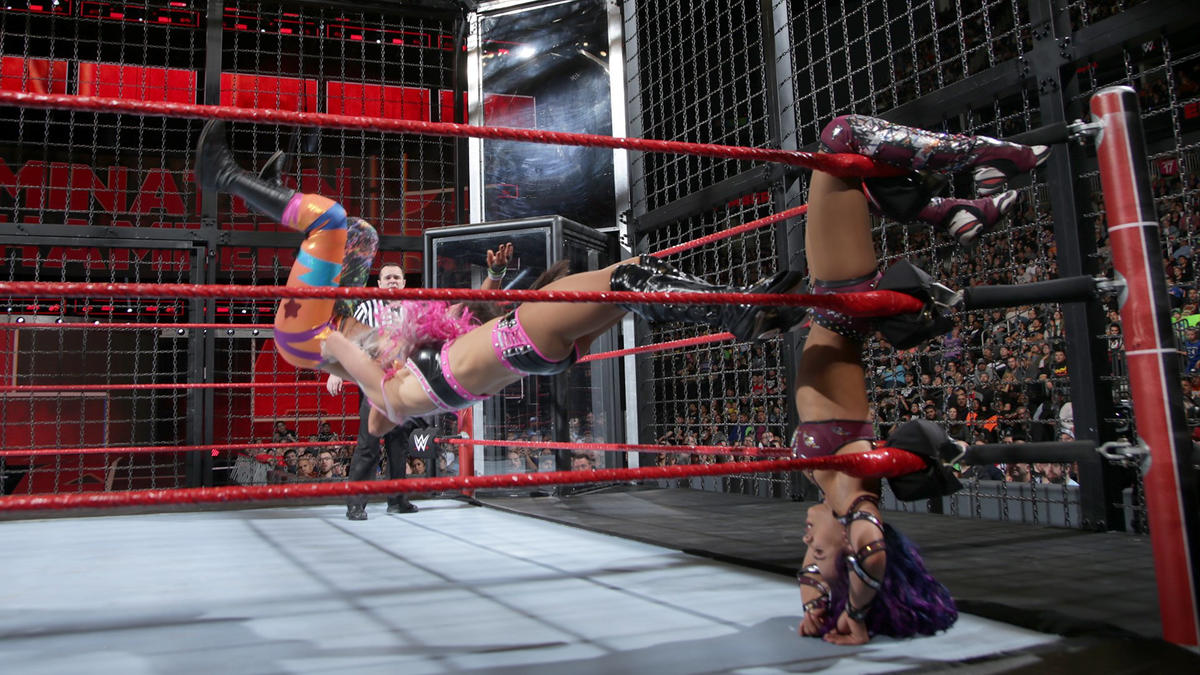 Bayley and Deville faced off to start the match. The bell rang with Cole saying it was “history in the making” because WWE loves driving that point home. It is history making. They wasted about one minute with Deville going for a takedown, didn’t get anything with it, Bayley tripped her up and hit a bulldog. Bayley sent Deville into the turnbuckles. There’s a camera guy positioned inside the Chamber getting the best shots of the action while other cameras are outside the cage. Deville with a slingshot that sent Bayley into the Chamber, but Bayley climbed up the Chamber a bit. Each woman avoided being sent into the cage. Back in the ring, Bayley sent Deville face first into the top turnbuckle and Bayley hit a back suplex for two. Bayley went up top, Deville crawled out of the ring and Bayley hit an elbow drop off the top onto the mat outside the ring for two. The pinfalls have to be inside the ring, which is not how it has always been, but it has been in recent years. The clock ticked down for the next entrant.

It’s Mandy Rose at #3 and she was met with a neckbreaker by Bayley. Neckbreaker by Bayley on Deville as well. Fans were chanting for Bayley, who hit shoulder tackles on Rose and Deville followed by an elbow on Deville. Bayley hit an elbow smash on both women at once. Bayley fought off both women with forearms, but Rose decked Bayley with a forearm and Deville tackled Bayley while on the mats outside the ring. They rolled Bayley into the ring leading to two counts. Running knee by Deville on Bayley. Rose with a jumping knee attack off the middle ropes on Bayley for a two count. The Absolution women trapped Bayley against the cage and worked her over with kicks. The clock ticked down again.

It’s Sasha Banks at #4 as she worked over Deville with punches. Banks whipped Rose into the pod a couple of times. Deville saved Rose briefly, but Banks punched Deville and hit her with double knees. Back in the ring, Banks with the double knees for a two count. Banks continued to clean house as she sent Rose into the turnbuckle and Banks hit the double knee attack on Deville while she was against the turnbuckle. Deville came back by sending Banks face first into the middle turnbuckle. Hard kick to the ribs by Deville on Banks. Bayley and Banks sent Deville into the Chamber two times followed by a double team hip toss that sent Deville back first into the cage. Rose drove Bayley back into the cage. Rose tossed Banks back into the ring. Rose with a running clothesline on Banks followed by a sitout face first slam. Banks avoided a Rose kick and a Bank Statement submission. Bayley running knee on Deville and Rose tapped out to Banks.

Analysis: That makes me sad, but I’m not that surprised considering Rose’s experience level.

Mickie James is #5 and she cleaned house early on. Banks rolled up James for a two count, but James countered her and James hit a neckbreaker. James with a flapjack on Banks. Deville slowed down James with a knee to the ribs and she sent James into the cage. James sent Deville into the cage, but Deville came back by driving James into the cage two times. Mickie did a sweet headscissors on Deville while she was holding onto the cage. James tried to climb up a pod, Banks grabbed her and James kicked Banks. Bayley climbed after Mickie for some reason and they battled a few feet off the ground with James kicking Bayley off the Chamber. James went on top of a pod. James jumped off the pod and took Deville with a dive. Wow that was impressive. It was like a Thesz Press she does off the top. James pinned Deville.

James celebrated that moment, so Banks hit a Backstabber on James and Bayley hit a Bayley to Belly suplex on James to eliminate her. Boo that! Bliss was shocked in her pod.

The buzzer went off and Alexa Bliss entered as the #6 woman in the match. Bliss tried to climb away from the women, but Banks and Bayley were able to track her down. When Bayley was on the side of the cage, Banks kicked her down. Fans chanted “yes” for that as Banks had a sinister grin on her face. The announcers put over that it’s every woman for herself. Bayley came back by sending Banks face first into the turnbuckle. Bliss with a forearm on Bayley. Bliss worked over Bayley with punches. Bliss stomped away on Bayley’s head. Bayley came back with a snap belly to back suplex on Bliss. Bayley tried to work over Bliss, but Banks drove Bayley into the corner. Bayley hip toss sent Banks into the turnbuckle and Bayley stomped away on Banks. Cole put over Bayley’s intensity. Bliss took Bayley down. Banks went up top and hit a splash on Bayley. The announcers called it a Frog Splash even though it was just a regular splash. Banks sent Bayley into the turnbuckle. Bayley hit the Bayley to Belly suplex on Banks, but she was too tired to cover and Bliss rolled up Bayley to eliminate her. It was not a ROLLUP OF DEATH~!, but a similar move where she held Bayley’s arms down.

Bliss covered Banks, but Banks kicked out. Bliss went up top with the Twisted Bliss, but Banks got her knees up to block it. Banks worked over Bliss with knees while against the cage. Bliss avoided a kick and sent Banks’ head against Bliss’ knee. Banks was recovering on the mat outside the ring, Bliss went on top of a pod and Bliss hit the Twisted Bliss onto a standing Banks. That wasn’t sold at all. What? She jumped off a pod! Anyway, Banks rolled through with the Bank Statement. They went into the ring with Banks still holding onto the submission. Bliss fought out of it. Banks kicked down Bayley with a double kick to the face. Banks looked up to a pod, she went climbing and Bliss tripped her up sending her into a pod. Bliss hit a draping DDT off the top rope and pinned Banks. The match went 30 minutes.

Analysis: ***1/2 The match was pretty good for the most part because they told several different stories in the 30 minutes. That’s what happens when you get that much time to have a match. It would have been nice to have James last longer because she was awesome in there and then they took her out before Bliss even entered, so all that build amounted to nothing. The action was good with James hitting that impressive press off the pod, there was Bliss hitting a move off the top and when Banks went for something similar, it ended up costing her the match. The spots with Banks and Bayley were good. I think a heel turn from Banks is still coming, but in this match it was more about every woman for herself. I’m not surprised by Bliss getting the win. It’s what I predicted and so did most people.

Bliss was interviewed by Renee Young in the ring while Banks sat on the steps outside the ring. Fans chanted “you deserve it” to Bliss and she said thank you. Bliss said this victory isn’t about her, it’s about every woman, every little girl at home and everybody that has ever dreamed big. Bliss held up the title in the air. Bliss said this proves that you can be whatever you want to be, so dare to dream and dream big. Bliss said she’s looking at the fans and the reality is none of you will ever accomplish any of your dreams. Bliss talked about how the odds were against her and she still won. Bliss said nobody believed she can win, but she did. She said she proved there is one true goddess in WWE. Banks was still on the steps looking sad.

Analysis: It sounded like Bliss was about to turn face with that promo talking about dreams and inspiring people, but then she went back to her heel ways, which is fine because she’s good at it.