The WWE Title was on the line on this Smackdown-only edition of the Elimination Chamber with John Cena putting the title on the line against five worthy opponents.

The Elimination Chamber structure was different this time. There’s less room outside the ring, but there is still enough room for guys to take bumps outside the ring. There is a difference in the material outside the ring, though, because it’s padding like a mat instead of steel. WWE probably wanted to make it a softer landing, which is good for the wrestler’s bodies. It is more of a square shape instead of a circle.

Here’s the order of entrance. Dean Ambrose was out first to a big ovation. Baron Corbin was up next to boos. The Miz walked out alone without his lovely wife Maryse. That’s a shame because I like her. Bray Wyatt was the fourth man to enter a pod.

AJ Styles made his entrance. He received mostly cheers even though he’s supposed to be a heel. The last man in the match was the WWE Champion John Cena. Mixed reaction for Cena like usual, but mostly cheers. 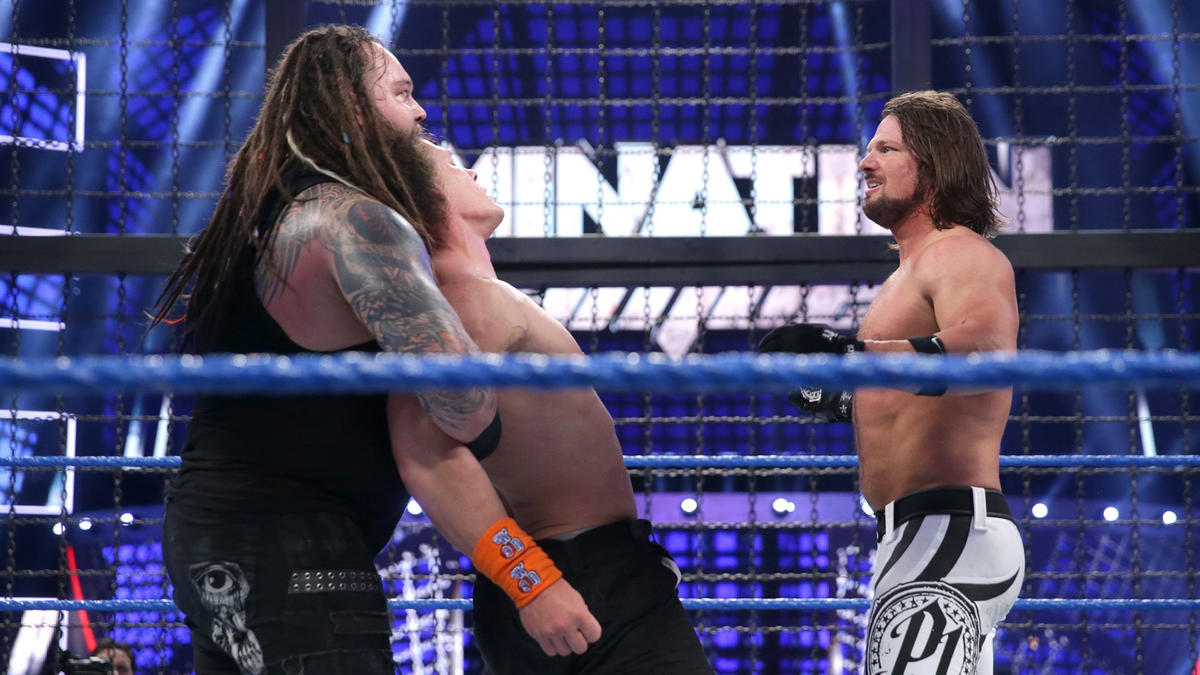 Cena with a shoulderblock. Styles kicked him in the leg. Styles avoided a corner attack. Styles picked up Cena on his shoulders and hit a spinning slam for a two count. Cena powered Styles by launching him into the air and sending him to the mat. Cena hit a sunset flip Powerbomb (aka the Code Red) for a two count. The fans chanted for both guys. Styles with the Ushigoroshi (sunset flip into the knee to the back) for a two count. Cena with shoulder tackles followed by the spinning back suplex. The clock counted down as we hit the five minute mark. The #3 man is Dean Ambrose.

Ambrose was aggressive as he went after Cena. A big difference with this new structure is there’s no longer a steel grating outside the ring. It’s more of a mat. Ambrose gave Styles a suplex into a slam onto the mat outside the ring. Ambrose went on top of the pod and nailed a flying elbow smash to knock down Cena out of the ring. Styles wanted a German Suplex on Ambrose. Cena snuck up behind them and it was a double German Suplex, which drew a big “ooohhh” reaction from the crowd. The fans started a “Let’s go Cena/Cena sucks” chant. Styles nailed a kick to the head of Cena and Ambrose with a clothesline on Styles. The clock counted down for the next man. It’s Bray Wyatt at #4 in the match.

Wyatt cleaned house as soon as he got in the ring. Running cross body block on Ambrose. Styles went for an attack, but Wyatt sent him into the chain. Styles avoided an attack leading to Wyatt hitting the turnbuckle. Styles hit a leg drop to the back of Wyatt. Styles and Cena climbed the side of the chamber for some reason. They exchanged punches on there. Cena crashed onto the padding below. Styles went onto a pod Ambrose met him on the top of the pod. Ambrose sent Styles head into the side of the structure. Ambrose tried to jump on Wyatt, but Wyatt nailed an uppercut punch on Ambrose. They did a unique Tower of Doom spot with Ambrose doing a powerbomb on Wyatt out of the corner and Wyatt tossed Styles over his head with an overhead suplex like move. What a move! That was unique. Corbin is #5 in the match.

Corbin sent Ambrose face first into the cage. Corbin hit the Deep Six slam on Ambrose in the ring. Corbin sent Wyatt face first into a pod (it didn’t break) and a boot to the face by Corbin. Corbin with a STO on Wyatt on the padding outside the ring. Corbin hit End of Days on Styles. Cena went back into the ring and he went for a STF on Corbin. Corbin powered out of it and hit End of Days on Cena. Ambrose with a missile dropkick on Corbin followed by a clothesline. Ambrose whipped Corbin into the chain several times. Corbin came back by sending Ambrose into the chain as well. Corbin avoided Dirty Deeds, Ambrose went for a move off the ropes, but Corbin shoved him off and sent him into the chain link. Corbin was the only man standing as Miz was #6 to enter.

Miz stayed in the pod. Ambrose snuck up behind Corbin and did the ROLLUP OF DEATH~! to eliminate him. Really? Yes, really.

After the elimination, Corbin hit Miz in the back of the head with a forearm. Corbin whipped Ambrose into one of the pod, which broke. That is always an impressive looking and sounding bump. Corbin put Ambrose’s head up against the chain link chamber and hit a forearm to the back to the head. Corbin hit Ambrose with End of Days in the middle of the ring. Miz took advantage of that to pin Ambrose and eliminate him.

Dean Ambrose eliminated by The Miz

Analysis: That was likely done to set up Ambrose vs. Corbin for the IC Title.

The Miz eliminated by John Cena

That left three men: Cena, Wyatt and Styles. Wyatt and Styles worked together against Cena briefly. Wyatt nailed Styles with an uppercut punch. Cena avoided a senton by Wyatt. Cena with shoulder tackles for Styles and a spinning slam for Wyatt. Cena hit Five Knuckle Shuffle on both guys. 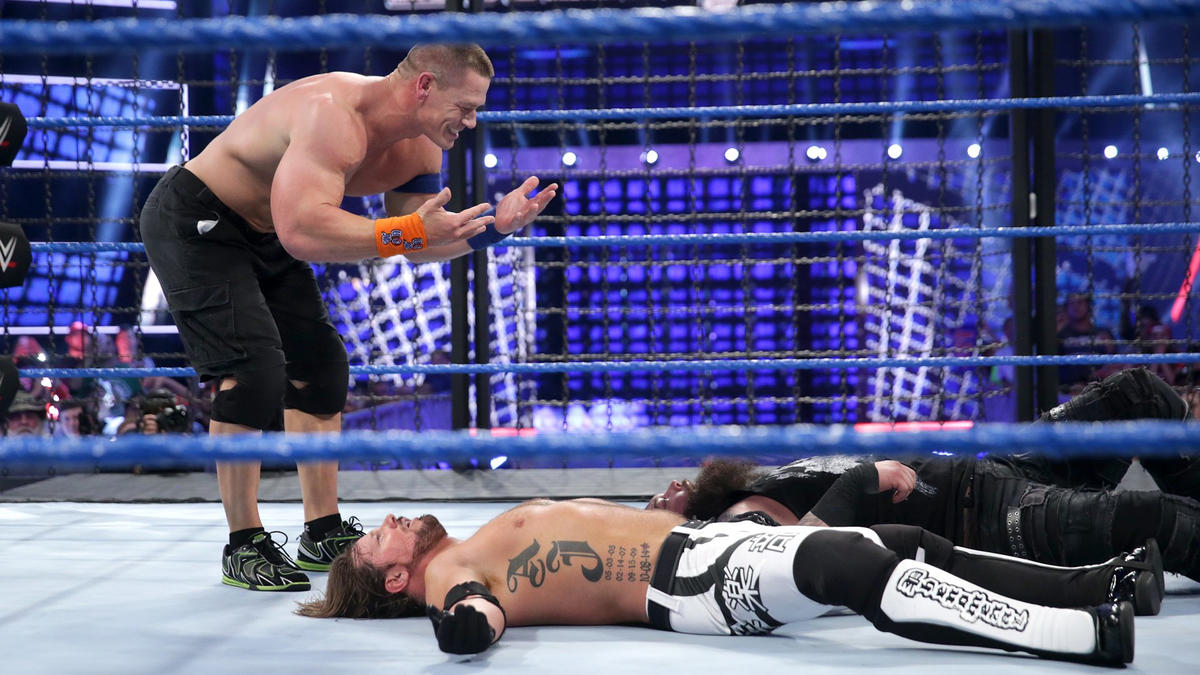 Cena hit the Attitude Adjustment on Wyatt. Styles back to his feet with a Styles Clash on Cena for a two count. Styles went for a Phenomenal Forearm, Cena avoided it and hit the Attitude Adjustment for a two count. Cena was stunned that Styles kicked out at two. Cena climbed up one of the pods and jumped off with a cross body block that knocked down Wyatt and Styles. Cena went for a AA on Wyatt, but Wyatt slipped out and hit Sister Abigail to pin Cena. Crowd cheering and chanting “yes” for that.

Analysis: That means there will be a new WWE Champion.

The match is at 30 minutes. Wyatt faced off with Styles. Wyatt was in control early. Styles came back with a forearm strike for a two count. Wyatt teased Sister Abigail, but Styles got a rollup for two. Styles nailed his striking offense and Wyatt decked him with a clothesline. Styles with a Pele Kick followed by a running knee attack. Styles nailed a springboard 450 Splash for a two count. Styles was grabbing his ribs for most of the match. I hope it’s just selling and nothing serious. Styles went for a springboard attack leading to a Phenomenal Forearm. Wyatt avoided it and hit Sister Abigail for the pinfall and the win. The match went 34:20.

Analysis: ****1/2 That was an outstanding match that was given a lot of time to tell the story of Wyatt outlasting everybody to win his first WWE Title. I loved the story with Cena and Styles having to outlast everybody, but they couldn’t do it. I also thought it was brilliant to have Wyatt pin Cena and Styles. It put him over in a huge way because he beat the two former WWE Champions. It gives Wyatt credibility immediately. Some finishers were kicked out of by Cena and Styles, but I didn’t mind it based on their amazing match at the Royal Rumble. They did a good job of utilizing Miz, Corbin and Ambrose in the match as well because it set up Corbin and Ambrose for a feud. Miz wasn’t in there for long, but at least he got a pinfall on Ambrose. As for Wyatt, I’m genuinely happy for him after having so many stop and start pushes in his career. He deserves to be in the spot he’s in. The win wasn’t a surprise by any means. I’m just glad that it finally happened.

(I don’t have much to add there. I loved this match when I watched it again. The booking was really good and the execution by the talent was great. They didn’t have any eliminations until all six guys were in there, Styles eliminated nobody, yet he lasted the whole time and Wyatt was put over huge because he beat the last two WWE Champions to win the match. It was not a fluky win at all. Wyatt proved he was the better man, so that’s why the story worked so well.)

Wyatt was handed the WWE Title. He had a big smile on his face. The crowd was mostly cheering even though he’s a heel. Replays aired of the key spots of the match with Wyatt getting the big pinfalls on former champs John Cena and AJ Styles.

Analysis: Good way of teasing the Wyatt vs. Orton match at WrestleMania.

(The tease was good, but the match at WrestleMania and the feud sucked.) 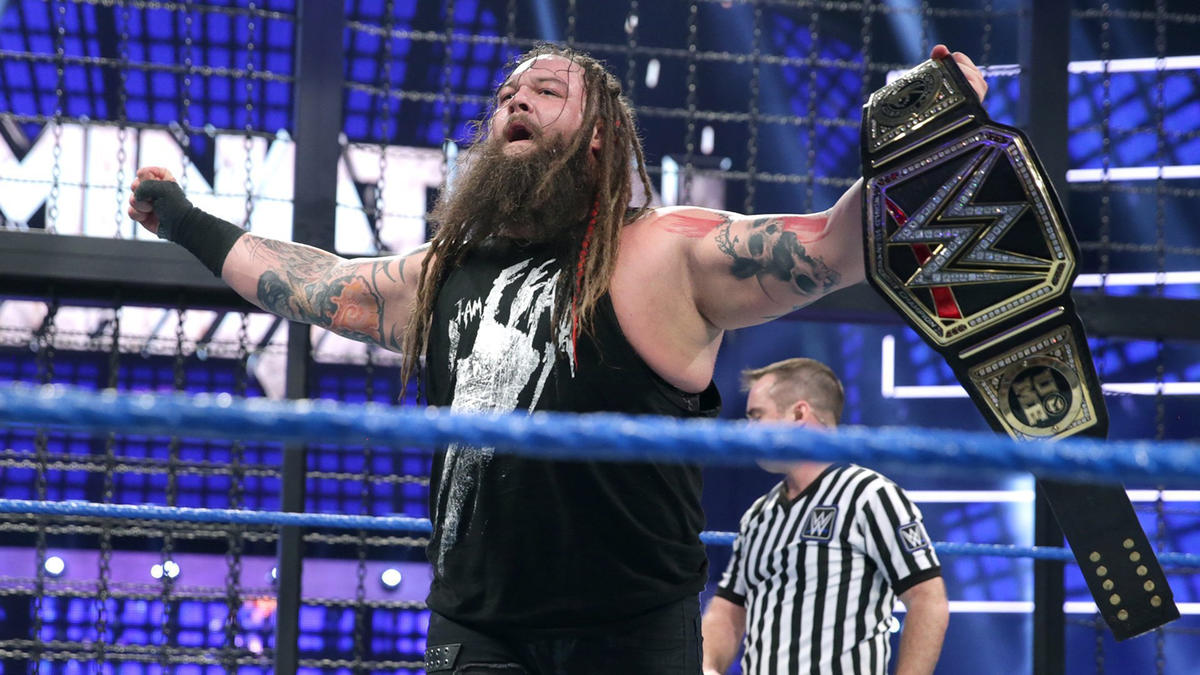 Wrestler that lasted the longest: AJ Styles at 34:20.

Most Eliminations: Bray Wyatt with two.

Best Performers (3): AJ Styles – He was the glue that kept the match together and made it great.

Bray Wyatt – He was in there for over 20 minutes and this was definitely one of the best matches of his career.

John Cena – An important role as the guy that walked into the match as the WWE Champ and then put over the future champ.

Most Memorable Moment: Wyatt winning the match was the most memorable part of it because we all thought it was probably happening, but until you see it you can’t really mark out for it. The ovation for him was pretty huge.