It was also an event that took place in the month of May instead of February, which is where the Elimination Chamber pay-per-view usually took place. It was just a case of WWE trying something different.

Here’s the order of entry for tag teams: The Prime Time Players, Los Matadores with El Torito hanging out on top of the pod, Cesaro & Tyson Kidd with Natalya, The New Day trio of Kofi Kingston, Big E & Xavier Woods are all in the match. The final two teams are Lucha Dragons and The Ascension, so they start the match. 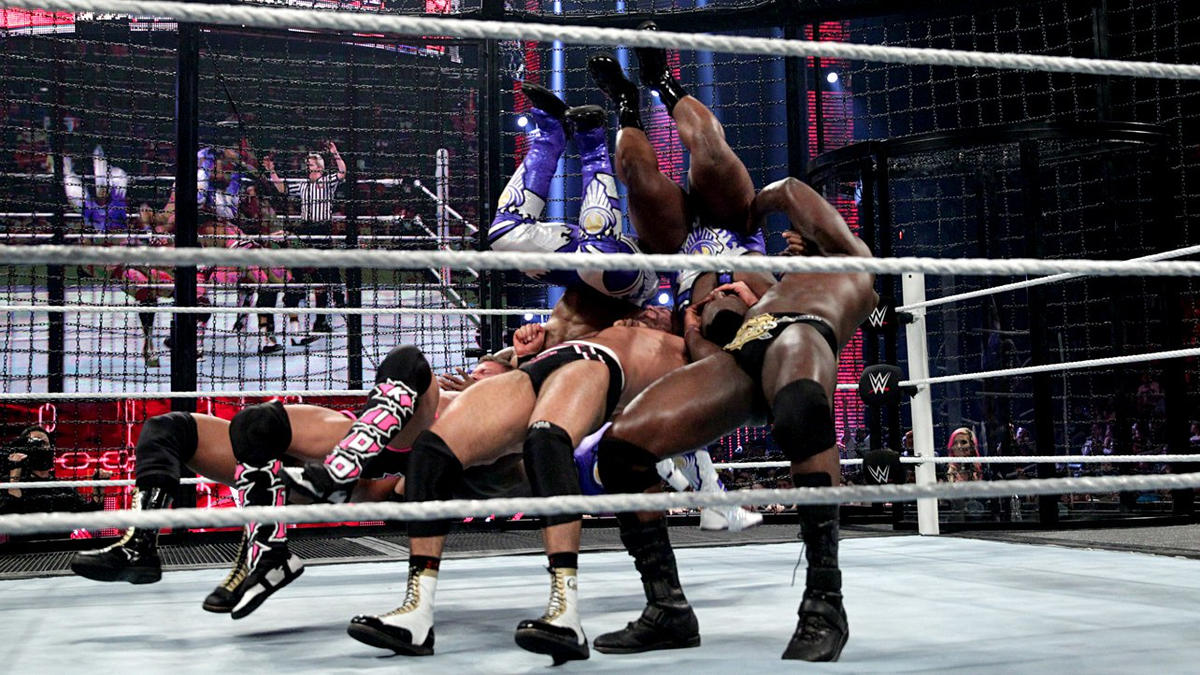 Elimination Chamber for the WWE Tag Team Titles: The New Day vs. Tyson Kidd & Cesaro vs. Prime Time Players vs. Los Matadores vs. Lucha Dragons vs. The Ascension

It looks like there was plenty of room in the pods even for the three New Day guys. No tags in this match. Lucha Dragons started with The Ascension and they dominated early on.There was a big move where The Ascension did a double slam move on Sin Cara. Kalisto tried to climb a pod, but he got his leg trapped in the cage. Sin Cara climbed a pod and hit a Swanton Bomb on Viktor. He was too hurt to cover. Kalisto was attacked by New Day, but then he broke free. They yanked down his leg so he was trapped again.

The 3rd team in the match are Cesaro and Kidd. Uppercut into a suplex move by them. Cesaro hit a forearm to the back of Viktor and then another uppercut by Cesaro on Konnor. Kidd went after Kalisto and then Cesaro hit a massive uppercut on him. Cesaro did a superplex off the top rope and off the top of the pod to bring Kalisto in the middle of the ring. Kidd hit a springboard elbow for a two count. Cesaro tossed Cara onto the cage outside the ring. Viktor slammed Kidd. Cesaro broke that up and then Kidd came back with a Sharpshooter on Viktor although Konnor made the save. Cara hit a spinning armbar on Cesaro as Lawler accidentally said JR, so Cole mocked him for that. Kalisto was sent into the cage, so he scaled the side of the chamber while Cara hit a slam on Kidd for two. Konnor hit a Dominator like move for a two count on Cara.

The 4th team in the match are Los Matadores, so El Torito hit a hurricanrana off the pod onto Cesaro. Kalisto climbed to the center of the cage. Everybody looked up at him, so he jumped down with a dive to take everybody out. It’s a spot John Morrison has done in the past, but it’s not easy to do. It looked like a nasty fall for Kalisto. El Torito also climbed to the top of the cage, but when he jumped off he was caught by The Ascension. The Ascension teamed together to hit the Fall of Man on one of Los Matadores to eliminate them.

Los Matadores eliminated by The Ascension

Lucha Dragons got some offense in, but it didn’t work. Kalisto was slammed down hard and then The Ascension hit Fall of Man to eliminate them.

Lucha Dragons eliminated by The Ascension

The 5th team is the Prime Time Players duo of Darren Young and Titus O’Neil. O’Neil dominated Viktor by slamming him into the cage repeatedly. Young hit a Gutbuster on Viktor and pinned him to eliminate The Ascension.

The Ascension eliminated by The Prime Time Players

Two teams left as Cesaro hit a huge clothesline to take down O’Neil and then a dropkick to Young, who was on the top rope. That was very impressive to get high enough to dropkick a guy that high up. They did a unique tower of doom style spot out of the corner with Cesaro giving Young a gutwrench suplex while O’Neil did the powerbomb part of it. Spinebuster by O’Neil on Kidd for two. All four guys were down in the ring as the clock wound down.

The 6th and final team was The New Day trio. They did a very choreographed spot where the four faces suplexed the three heels at the same time. Cesaro and Kidd tossed Woods into a pod to trap him there. They did the Cesaro Swing spot into the Kidd dropkick on Kingston. 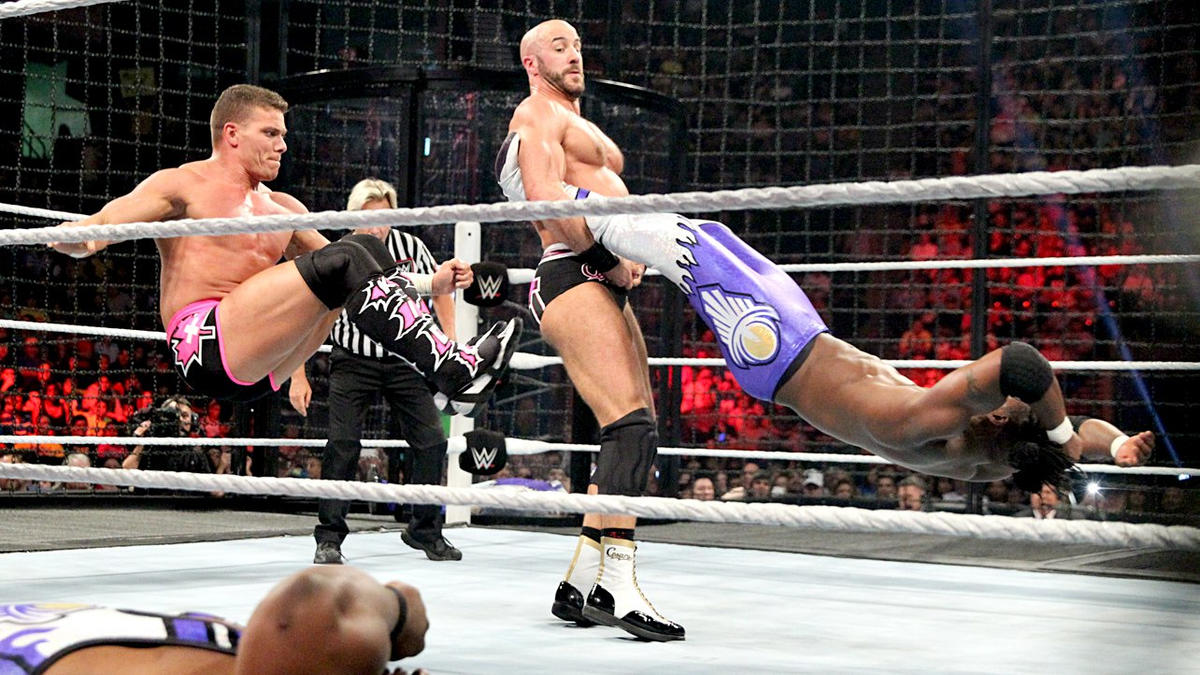 Immediately after that, Young did the ROLLUP OF DEATH~! on Cesaro and that was enough to eliminate Cesaro.

Big E helped Woods out of the pod, so they worked together on the PTPers with Woods hitting a huge clothesline followed by Kingston hitting boots to the face on O’Neil. Young avoided a Big E slam attempt, then knocked down Woods and Kingston off the top rope while Big E missed a corner charge, so he hit the ring post as well as the pod. O’Neil and Young dominated by tossing the three New Day guys around, but Kingston took down Young with a hip toss onto the cage. O’Neil slammed Kingston into the cage repeatedly. O’Neil hit multiple clotheslines on Big E. Young hit a Gutbuster on Kingston for two. Looks like Kingston was grabbing the rope when he kicked out too. Big E hit a belly to belly on Young outside the ring. O’Neil with a huge slam on Big E. Woods jumped into O’Neil’s arm, then Kingston hit Trouble in Paradise and all three New Day guys covered for the win. The match went 23:40.

Winners by pinfall: The New Day

Analysis: *** There’s nothing to really compare it to since that’s the first tag team Chamber match in WWE history. Good work by everybody in the match although it was tough to follow at times too. I was surprised the Lucha Dragons weren’t booked stronger because I thought they were next in line, but WWE chose to push the PTPers a bit more. It was a cheap win for New Day since they had three guys in the match and they also got to enter last. They have been champions for a little over a month, so it makes sense that they would retain. 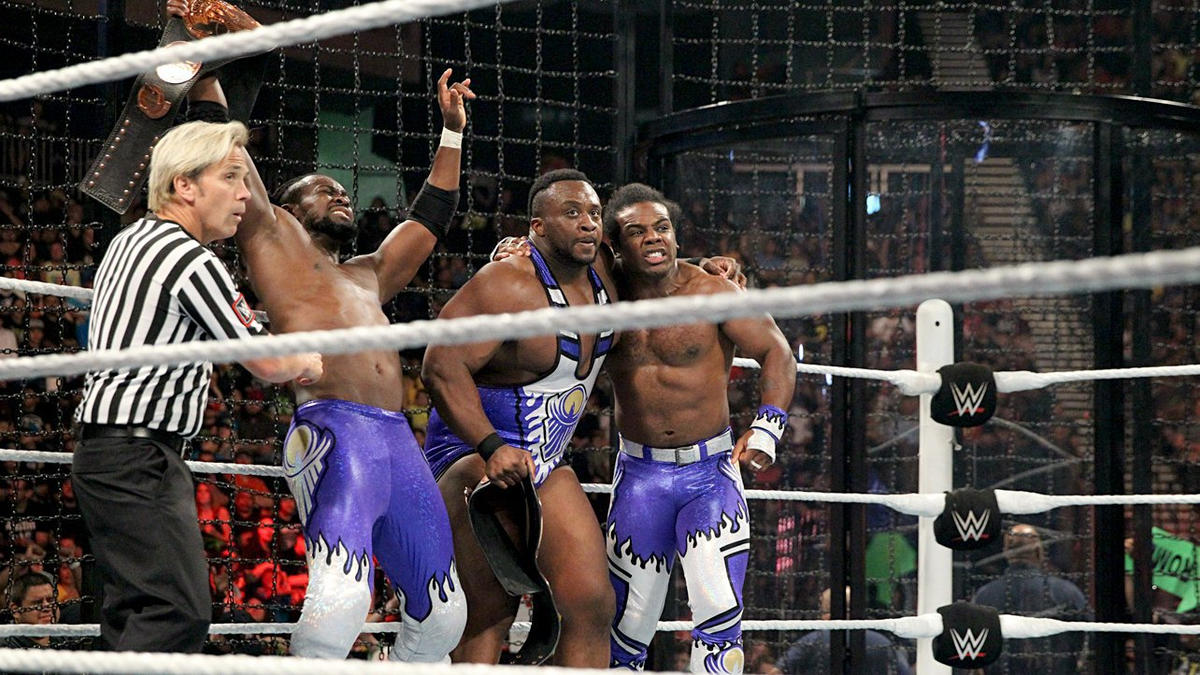 (This was early in The New Day’s run as a heel team that was given the titles a bit earlier than most of us, but it ended up being a good decision in the long run because of their work in the ring as well as their personalities. It’s the second shortest Chamber match ever with the SummerSlam 2003 match holding the record as the shortest due to Triple H’s groin injury limiting him. My three star rating is the same as when I saw it live.)

Wrestler that lasted the longest: The Ascension at 13:30.

Most Eliminations: Prime Time Players and The Ascension with two.

Most Memorable Moment: Kalisto climbing the top of the cell and landing on a bunch of dudes.