The WWE World Heavyweight Championship was on the line at the 2014 Elimination Chamber PPV with Randy Orton carrying his two major titles into the match to defend against five opponents.

At the 2013 WWE TLC pay-per-view, Orton beat Cena to unify the WWE and World Heavyweight Titles, so they renamed it the WWE World Heavyweight Championship during this period. The fans were really behind Daniel Bryan as a title contender at this point while Orton was a top heel that was backed by The Authority group led by Triple H and Stephanie McMahon.

This was also the first main roster PPV event after WWE Network launched in February 2014. 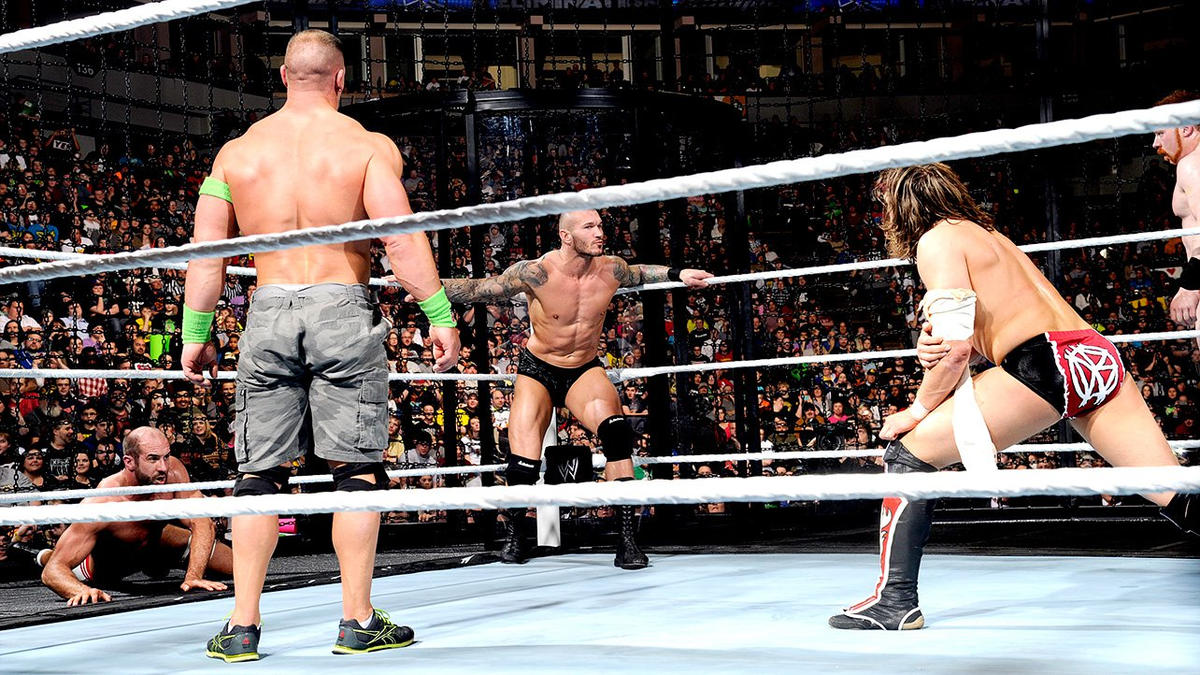 The fans were chanting “We the People” for Cesaro early on as Sheamus hit a shoulder tackle for two. Sheamus hit a clothesline that sent Cesaro over the top and saw him land on the cage. Sheamus hit his ten clubbing forearm blows. Cesaro came back by causing Sheamus to hit the post and then Cesaro hit a double foot stomp. Huge uppercut by Cesaro in the corner of the ring. After five minutes, it was time for another competitor.

The 3rd man in the match is Daniel Bryan as the crowd chanted “yes” for him. He hit a double missile dropkick. Knee to the ribs of Cesaro. Running clothesline by Bryan on Sheamus. He hit both guys with a barrage of kicks with the fans chanting “yes” and he hit a roundhouse kick on Cesaro. Bryan had Sheamus in a leg submission and hit a bridging suplex on Cesaro at the same time. Backbreaker by Cesaro for two. Clothesline by Cesaro on Sheamus sent Sheamus outside the ring and onto the steel railing. Outside the ring, Cesaro whipped Bryan into the pod and Bryan was favoring his bad left shoulder. Sheamus gave Cesaro a forward roll onto the steel grating outside the ring.

The 4th man in the match (10 minutes into it) is Christian. He focused his attack on Bryan’s left arm by throwing him into the side of the cage repeatedly. He ripped off the protective tape from Bryan’s arm. Heel Christian is great. He slammed a pod door into Bryan’s left arm. In the ring, Tornado DDT by Christian on Bryan earned a two count. Bryan with an enziguiri kick to the head, but his corner dropkick didn’t work as Christian moved. Sheamus slammed Christian into the cage repeatedly, but Christian countered him with a reverse DDT on the steel. Cesaro wanted his uppercut outside the ring, but Christian held onto the cage. Cesaro gave him a Powerbomb into the pod. Two count for Cesaro on Christian. Sheamus threw Cesaro into the cage and Cesaro came back with a gutwrench suplex onto the pod outside the ring.

It’s John Cena as the 5th man in the match. Cena didn’t get much offense in as Bryan hit a hurricanrana on him. Christian hit Killswitch on Bryan, which Bryan kicked out of. Cesaro wanted a Cesaro Swing, but Cena broke it up and it led to a slingshot into the corner. Suplex by Cena on Christian. Sheamus hit the White Noise on Cena. Cesaro threw Sheamus into the corner, Christian hit Sheamus with boots to the face. Sheamus fought off the Neutralizer and Christian sent Sheamus outside the ring. Tornado DDT by Christian on Cesaro. Cena threw Christian into the cage. Cesaro tossed Cena into the air and hit the uppercut for two. Great nearfall right there. Cena was going after Cesaro, but Bryan broke that up and attacked everybody. Sheamus slammed Bryan into the steel. Cesaro did his super strong superplex on Sheamus for two. No eliminations as the last entrant made his way into the ring.

Randy Orton is the 6th and final man. Orton stomped away at everybody. Then he did his pose. Everybody cornered Orton on one turnbuckle. Orton went back into a pod. Only Sheamus faced off with him while the others paired off. Sheamus stepped back, then hit a Brogue Kick through the pod and that knocked down Orton. Great spot right there. The crowd loved that. Clothesline by Sheamus sent Orton into the ring. Cesaro sent Sheamus into the steel. Cena with the spinning suplex and Five Knuckle Shuffle. Cesaro threw Cena over the top. Cesaro Swing by Cesaro on Orton with the crowd counting along with him for most of the 20+ rotations. Bryan hit a rolling German Suplex on Cesaro. Great move. Powerslam by Sheamus on Christian. Sheamus wanted a Brogue Kick on Christian, but he moved and Sheamus hit Cena. Christian got two counts on Sheamus and Cena. Christian tried to escape from Sheamus, so he went on top of one of the pods. Orton hit a superplex on Sheamus. Christian hit a Superfly Splash off the top of a pod on Sheamus and he covered him to eliminate him. That’s the first elimination after 26 minutes.

The doctors checked on Sheamus as he was escorted out. Christian gave Orton a back body drop over the top onto the cage. Bryan hit the flying knee on Christian to eliminate him after 27 minutes.

The final four all stood in a corner: Bryan, Cesaro, Orton and Cena.

Orton and Cesaro were dumped outside the ring, so there was a big Bryan/Cena face off. Neither guy really had an advantage. Cena put Bryan on his shoulders in AA position and Cesaro suplexed Cena backwards so both guys went down. Very impressive. Cesaro knocked Orton down outside the ring. Cena hit a hurricanrana to counter a gutwrench. Cena gave Cesaro an Attitude Adjustment over the top rope and into the broken pod that was on the steel outside the ring. Cena covered to eliminate Cesaro after 30 minutes.

Final three are Cena, Orton and Bryan. As Cena applied the STF on Orton, the Wyatt Family’s graphic showed up. The Wyatt Family was in the ring. Announcers wondered how they got in there. Probably when Cesaro was taken out. It’s not like we’re supposed to think the announcers are smart. Harper hit a boot on Bryan. Splash by Rowan and clothesline by Harper on Cena. Wyatt hit Sister Abigail on Cena. The crowd was chanting “thank you Wyatts” for that. Orton slithered in the ring and covered Cena to eliminate him. Cena’s out 32 minutes into the match. 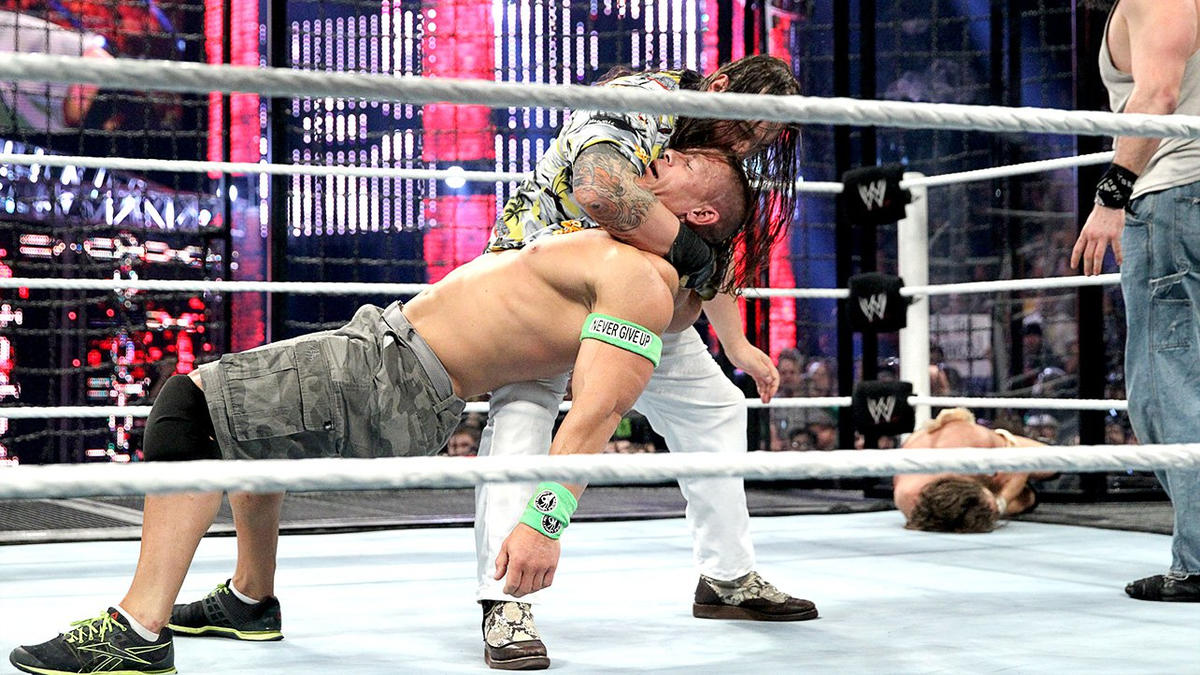 Kane entered the ringside area and was standing in the cage. Bryan hit Kane in the head with a flying knee attack. Orton tried to capitalize, but Bryan attacked him with running dropkicks while Orton was upside down in the corner. Bryan hit a back suplex off the top rope. Bryan went to the top, Orton tripped him up and Orton hit the DDT off the middle ropes. Bryan hit Orton with the running knee attack. Kane pulled the ref out of the ring when he was counting the pin. Bryan kicked Kane. Orton hit the RKO. Bryan kicked out. Did not expect that. Inside cradle by Bryan for two. It looked like Bryan had gained the momentum back, but Kane punched him in the head. Orton hit the RKO again. He covered for the win and that was it for Bryan. The match ended after 38 minutes. 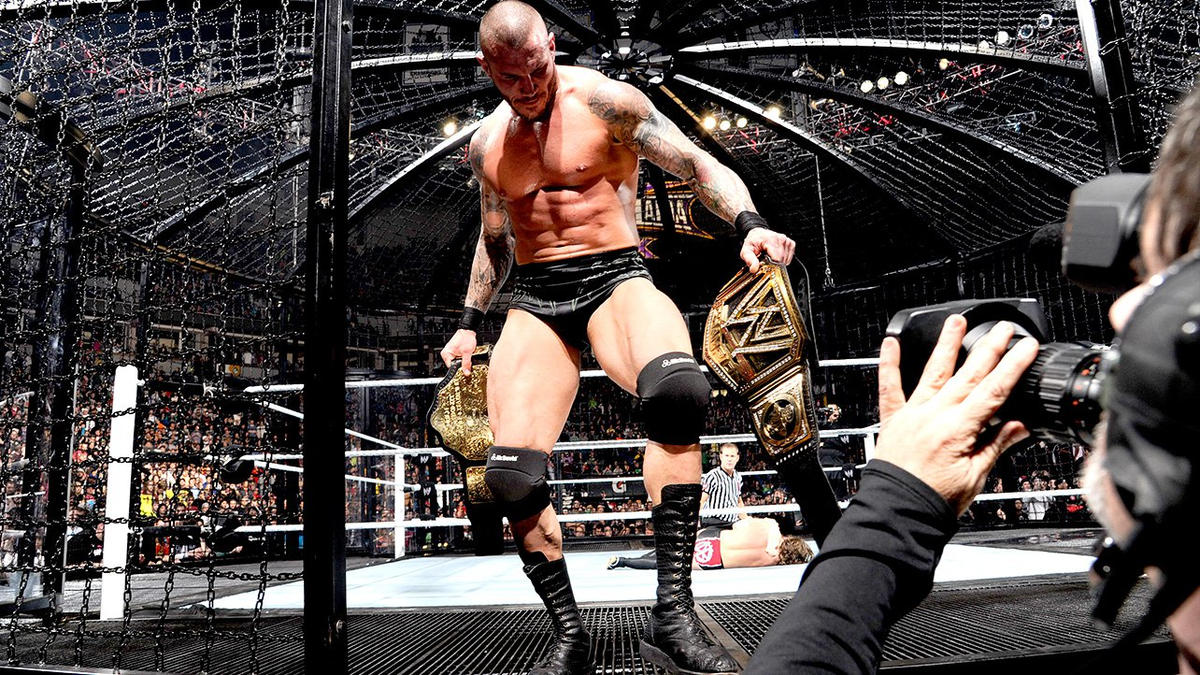 Analysis: ****1/4 I’m not sure if there’s been a Chamber match with that much interference before although other matches have had interference. It was also booked in a way that was different from past years because there were no eliminations in the first 20+ minutes. The work in the match was really good as expected. One thing that bugged is that the announcers were shocked about how the Wyatts got into the chamber. Probably because the door opened when Cesaro was taken out. Why do the announcers have to treat the audience like idiots? Then they wondered why the Wyatt Family went after Cena. It’s not like it was the first time since they cost Cena at the Rumble. Bryan and Cesaro were the best guys in the match, which isn’t a surprise. They had the most memorable moments. I thought Christian performed very well too. Sheamus’ Brogue Kick into the pod was a cool move as well. I’m glad Orton wasn’t in the ring as long and it was a cheap win for him. He pinned Cena after Wyatt’s help and he pinned Bryan after Kane’s help.

They showed fans in the crowd. They all looked shocked. Bryan was frustrated in the ring as Orton posed with his titles and that was the end of the show.

(My original rating was a bit lower. I boosted it by 1/2* just because I liked it more on this viewing because of all the stories they told even with the heavy interference. I remember thinking maybe they would be smart enough to give Bryan the win, but it didn’t happen. Bryan should have won the Royal Rumble in 2014, yet WWE decided to not even book him in the match. It was nice to see Cesaro booked so well. This set up his win in the Andre Battle Royal at WrestleMania 30. Cena losing because of Wyatt and friends set up their match at WrestleMania 30.)

Wrestler that lasted the longest: Cesaro at 30:10.

Most Eliminations: Randy Orton with two.

Best Performers (3): Daniel Bryan – He was the centerpiece of the match that delivered an incredible performance like usual.

Cesaro – It was the most high-profile performance in his career up to this point. He proved how great he is.

Randy Orton – A nice reminder of how great he can be as a heel. It’s his best role for sure.

Most Memorable Moment: The interference from Kane on Bryan and the Wyatts on Cena is what sticks out the most about this match.