It featured Daniel Bryan defending the title against five opponents although there was a change from what was originally advertised.

The original match was going to feature Randy Orton as one of the men involved as you can see by the initial graphic for the match. 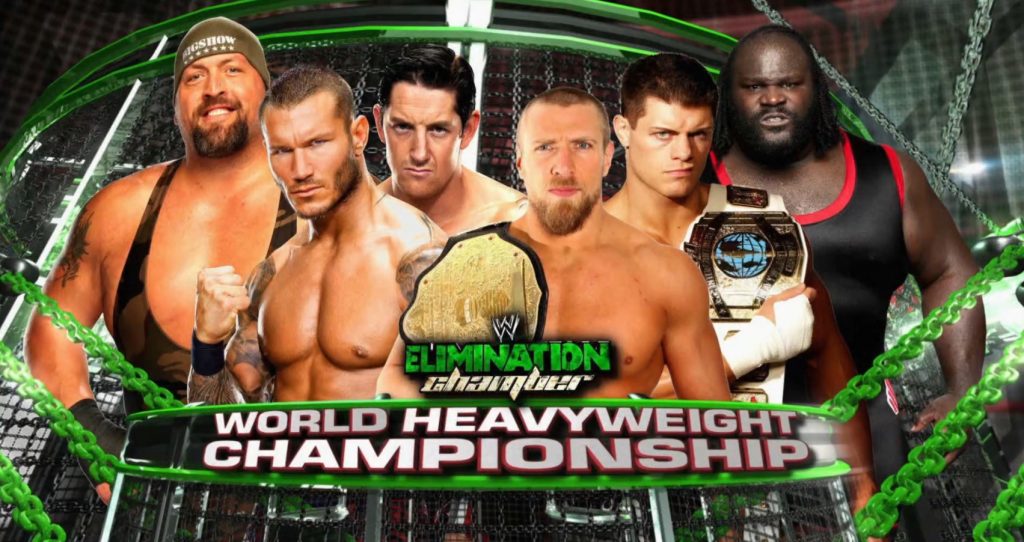 What happened to Orton? From my Elimination Chamber 2012 review:

“They showed clips of Bryan attacking Orton & Show from the week prior on Raw. Randy Orton suffered a concussion after hitting the RKO on Show. It was legit. In storyline, they said it was Bryan that caused it. Then they showed highlights from the Battle Royal on Smackdown when Santino earned his title shot for the Elimination Chamber.”

That meant that Orton was out and Santino was in. 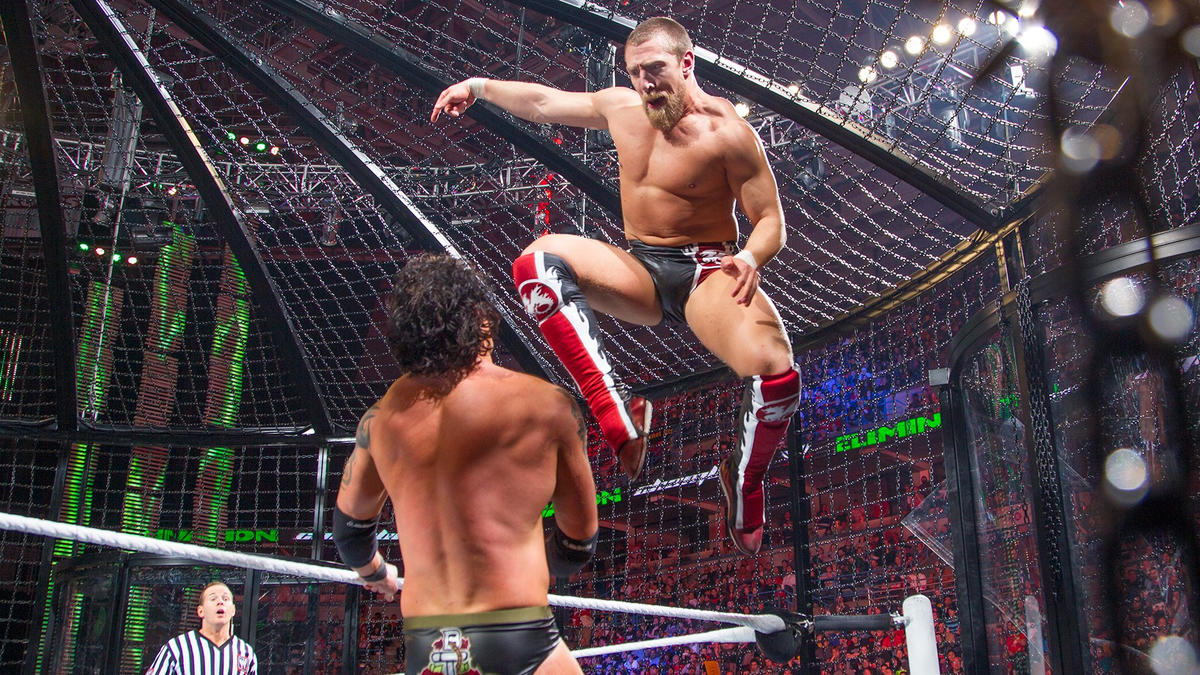 The first two entrants in the match were Wade Barrett and Big Show. After Show opened it up with chops, Barrett booted him down to obtain control of the action. Barrett threw Big Show into the side of the cage. Barrett worked on Big Show’s knee. A very slow start to the match, which isn’t a surprise considering the combatants. That’s not a complaint. Just saying it’s slow in the early going, which is fine as long as it picks up. Big Show came back with a suplex for two. Booker T says Show should “try to get this boy out of here quick.” He likes saying “boy” a lot. Show threw him over the top so Barrett crashed onto the steel outside the ring. The clock ticked down for our next entrant as Show faced off with Daniel Bryan.

The #3 man was Cody Rhodes. Show chopped Rhodes in the chest and then he stared at Bryan. Show threw Rhodes outside the ring where he crashed onto the steel. Show went to splash him into the cage, but Cody moved. Cody went to the top, so Show threw him into the cage. That was a manly bump by Cody. Back in the ring, Barrett avoided the chokeslam by going after Barrett’s knee. I should point out too that Cole’s heel act has been toned down in a major way. Nice high-low double team as Barrett hit a clothesline while Rhodes took out his knee. Then Barrett hit a clothesline on Rhodes that sent him over the top to the floor. Barrett threw Rhodes into the cage three times, which caused Booker to yell: “Put it on that boy, Wade!” Rhodes got some offense in on Barrett by throwing him into the cage.

The #4 entrant was Santino. He got his hip lock and headbutt on Barrett. The crowd was excited for Santino. Big Show got back to his feet and went after Santino. Cody attacked the back of Show’s knee. Big Show recovered to throw Barrett & Cody out of the ring. Show tried to give a chokeslam to both guys on the steel, but they countered it to give him a suplex on the steel. That was impressive. They tried to pull Show into the ring to pin him because you had to do pinfalls in the ring. Rhodes went after Barrett and hit an awesome moonsault on Wade. Cody threw Wade out of the ring. Cody whipped Santino into the cage and then rammed his right arm into the cage, which I guess is his way to eliminate the deadly Cobra finisher of Santino.

The #5 man is The Great Khali. He hit chops on Rhodes and Barrett. The crowd didn’t react much to Khali. He hit the Punjabi Plunge on Rhodes and then Barrett. Then he hit a chop on Santino. Big Show got up, ran the ropes and hit a spear on Khali to eliminate him at 19:25. Khali was in the match for about one minute. Smart booking there.

Following Khali’s elimination, Big Show stared at Bryan who was still in his pod. Lawler theorized that Show should just start spearing everybody. Obviously he should do that or he should just punch them in the face, but that would end matches a lot quicker. Show climbed to the top rope and tried to break the chains at the top of Bryan’s pod. Bryan had a look of fear on his face as Show tried to create a hole to go in. Show broke in with his feet. During all of this, the other three guys were down. Crowd was loud during Show’s attack on Bryan. He went after him in the pod with punches, headbutts and boots to the face.

The clock counted down and Daniel Bryan officially entered the match as the #6 man. Bryan got out of the pod, Show grabbed him and threw him into the pod. Ouch. Finally, somebody else got up as Barrett got to his feet, but Show knocked him down with a headbutt. Show hit a butt splash on Bryan followed by a shoulderblock. Big Show hit a chokeslam on Bryan. Barrett came back with a boot to the face on Show. Barrett knocked Big Show out of the ring with a boot. Santino got a rollup on Barrett for two. Outside the ring, Cody hit two Disaster Kicks to the head of Show. Impressive moves there. Rhodes hit a DDT on Show. Barrett hit an elbow drop off the middle rope onto Big Show. Rhodes covered and that was enough to eliminate Big Show at 24:18. Rhodes celebrated as the match “favorite” was eliminated.

Analysis: It was a good way to set up Rhodes vs. Show at WrestleMania. I liked that elimination a lot because it put over the heels for being smart by working together.

As Cody was celebrating, Santino rolled him up and eliminated him at 24:18. Cody was pissed, so he gave Santino the Cross Rhodes before leaving. Cody was fantastic in this match, but that’s not new. The guy is on a roll these days.

Analysis: The classic pin the guy right after he pinned somebody else spot strikes again.

Barrett went to cover Santino, but Santino got his shoulder up. The crowd was chanting for Santino. Barrett threw him into the cage repeatedly. Barrett tied him up into the cage and gave him a kick to the head. After a whip into the ropes, Bryan slipped on the middle turnbuckle, but they improvised and Bryan came back with a rollup on Barrett for two. They fought on the top rope and Wade crotched him on the top. He followed that up with a hard clothesline. They went outside the ring and Barrett gave Bryan a powerbomb into the cage. Ouch. Barrett put Bryan’s head in one of the doors and slammed it on his head. He rolled him back in the ring for a two count. Barrett put Santino down with another stiff boot to the head. Wade worked on Santino with knees to the kidney. Bryan attacked Barrett from behind with a knee off the top followed by hard whips into the pods. Bryan went to the top, but Barrett was able to counter it by attacking him on the top rope. Santino went after Barrett, who was able to overpower Santino. Barrett missed a top rope elbow. Bryan went up and hit a top rope headbutt. Santino covered Barrett to eliminate him at 30:37. Barrett lasted over 30 minutes in the match. Very impressive.

We’re down to two with Bryan facing off with Santino. The crowd was hot, cheering for Santino. Bryan hit a nice dropkick in the corner. Bryan followed up with his series of kicks to the chest. Bryan charged in the corner, but Santino moved out of the way and rolled him up for two. Great nearfall. The crowd thought that was it. Bryan put him down again and went for the headbutt. Santino pulled out the Cobra and hit Bryan in the head with it. One…two…no! The crowd thought that was it. Bryan grabbed Santino’s right arm and put him in the LeBell Lock as Santino tried to fight out of it. The crowd was really loud in their support for Santino. After fighting the hold for about 30 seconds, Santino tapped out at 34:04.

Analysis: ***3/4 It was slightly better than the first one although the pace at the beginning was a little slow. I thought Bryan carried it with Santino doing a great job too. The work of Rhodes, Barrett and Show was very good as well. Khali was just there to get eliminated quickly, basically. The story was the survival of the “underdog” World Champion who keeps finding ways to retain his title. Santino’s battle with Bryan at the end was a lot of fun because the crowd really beloved Santino had a shot. That’s good booking. He was mostly a joke character, but they believed he could win and that’s what you want out of a performer in this match. They have to have the believability factor. Santino had it here.

(Seeing Santino do well was a big surprise because he was booked like such a joke for most of his career. Bryan was the heel champion that was booked like a bit of a fluke, so this was a way to make him look good as the champ and prove he could get the job done in a big match.)

Wrestler that lasted the longest: Wade Barrett at 30:37.

Most Eliminations: Santino with two.

Best Performers (3): Daniel Bryan – I would have liked to see him in the match longer, but he did great while he was there.

Santino – A pleasant surprise to see him booked strongly for a change.

Cody Rhodes – Even though Barrett lasted longer, I thought Rhodes did better.

Most Memorable Moment: The nearfall of Santino nearly beating Bryan stands out. I remember that moment well.

WWE Unforgiven: In Your House 1998 Review