The WWE women’s revolution (or evolution) took place in the summer of 2015 when the company finally decided to give more of a spotlight to the women’s division. Three of the women at the forefront were Charlotte, Sasha Banks and Becky Lynch, who went on to have this great match at WrestleMania 32 in 2016.

At this point, WWE was billing Charlotte Flair as just Charlotte without the Flair name, but they would eventually add the Flair name again to her moniker since she is the daughter of two-time WWE Hall of Famer Ric Flair. 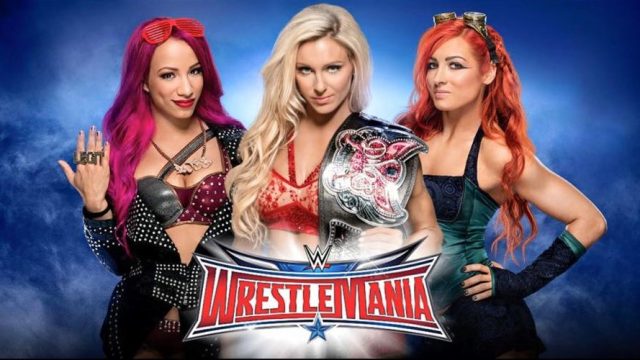 Who: Charlotte vs. Sasha Banks vs. Becky Lynch for the Divas/Women’s Title

Where: AT&T Center in Dallas, Texas

The three women came up the ranks together in NXT and then they were called up to the main roster at the same time as part of the “divas revolution” in the summer of 2015.

Charlotte was pushed the fastest as she became the Divas Champion in September 2015. During her title reign, she became a cocky heel that had her legendary father Ric Flair at ringside as her manager. She held the title for 196 days heading into this match with a lot of people thinking she might drop the title.

When Banks started on the main roster she was a heel with Naomi and Tamina. The crowd loved Banks, though, so she turned and started to gain the trust of Lynch as well. Banks and Lynch won a tag match against Naomi and Tamina at last year’s Fastlane event before WrestleMania.

Banks and Lynch were popular faces with Banks positioned as the top face woman on the main roster. Lynch was well-liked as well. It’s just that people thought of Banks as being at another level above her.

When WWE had Lita introduce a new Women’s Title to replace the Divas Title it made me happy. They also noted that the term “divas” was going to be out of WWE vernacular. I always thought the term “divas” was unnecessary. It was just a WWE marketing tool to put a label on their female talent for about 17 years. Why did it take so long to get rid of the term? No idea. I’m glad they got rid of it. 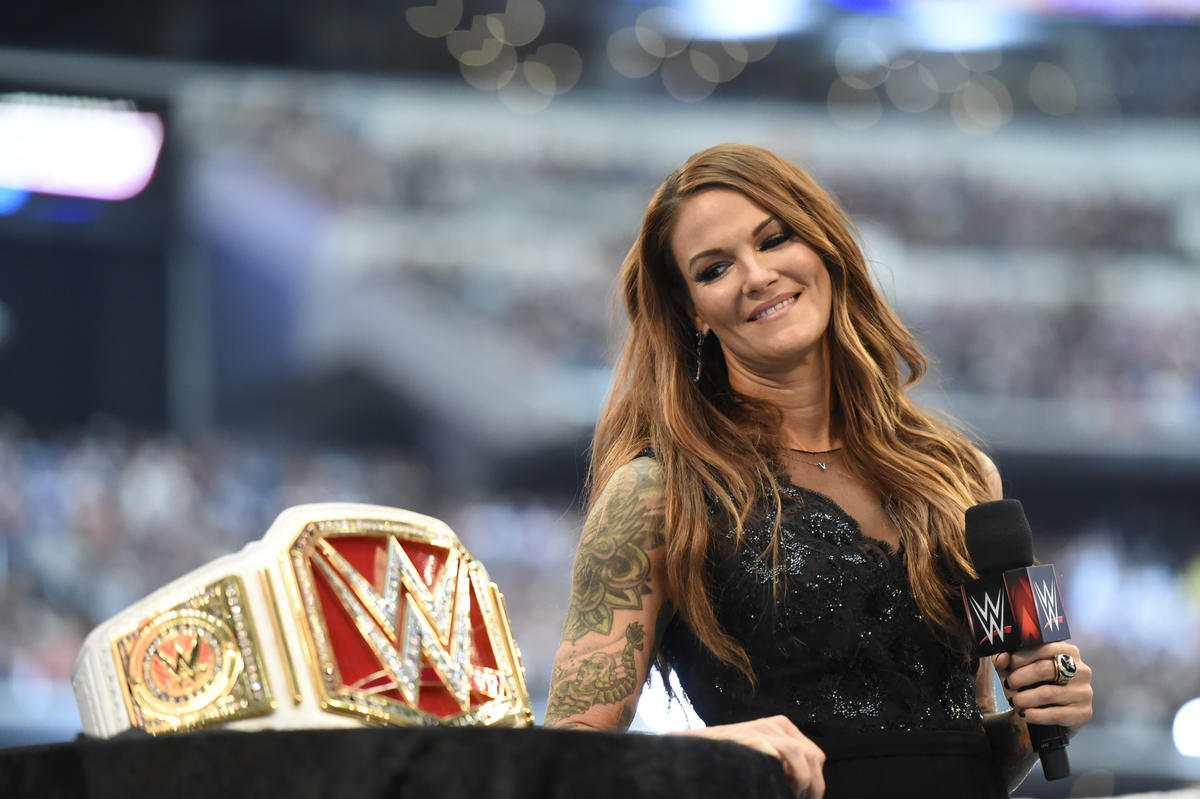 I’m not a huge fan of triple threat matches in general because I find them to be repetitive at times, but I was excited about this one because of their history together as three women that we were introduced to in NXT and now they were thriving on a bigger stage. I had a lot of confidence in them being able to put on an entertaining match as long as they got time to tell a story.

I felt like Sasha Banks was probably going to win the title because it made sense for her first title win to happen at WrestleMania and she was a popular babyface. I was wrong about that one.

Here’s my full review of the match plus the analysis, which was written in 2016.

A video package aired about the Divas Revolution leading up to this match.

Lita was in the ring holding the new WWE Women’s Title. Becky Lynch entered first. Sasha Banks had a really cool entrance with her cousin Snoop Dogg rapping for her along with a woman named Raven Felix singing the lyrics of Sasha’s song. I loved this because I think Sasha’s got one of the best songs in WWE. Also, I loved that Sasha was wearing Eddie Guerrero-like pants and boots for this match. That was her hero, so it’s a great tribute to him.

Charlotte’s entrance was also awesome because she had a robe like her father Ric Flair and apparently part of this robe was from Flair’s outfit in his last WWE match at WrestleMania 24.

Analysis: I’m just glad that their entrances were treated like a big deal. The build up to this match has been great and they made it seem important with these entrances as well. 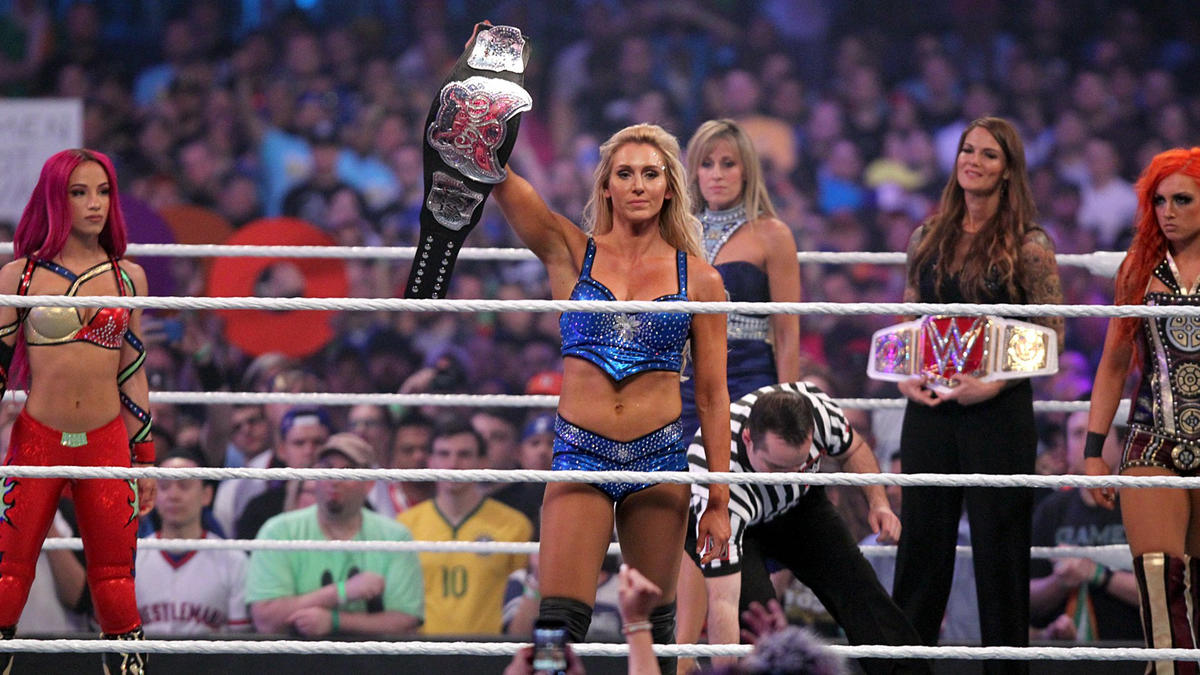 There were some pinfall sequences early on. Nice to hear Cole calling them “superstars” instead of “divas” because they are dropping the divas term. Banks did a headscissors takedown followed by an Eddie-like shake. They went for a sunset flip spot by Banks, but she didn’t connect with Lynch – they were able to make up for it. Charlotte picked up Banks outside the ring and sent her back first into the ropes. Lynch took out Charlotte with a forearm. Reverse DDT by Lynch on Charlotte gets two. Charlotte came back with a backbreaker on Lynch for two. Banks tried getting back into it, but Lynch sent her over the top to the floor. Lynch applied an armbar on Charlotte only for Banks to break it up, but then Banks got sent out of the ring. Charlotte applied a Figure Four on Lynch and Banks capitalized on that with an Eddie Guerrero-like Frog Splash on Charlotte for two. That was a really cool spot Lynch with a German Suplex on Banks. Lynch with a pumphandle in a slam for a two count that was broken up by Banks. Banks with a double knee attack to Lynch and then she hit a dive on Charlotte through the ropes. It looks like she hit her feet on the ropes, but she was still able to land safely. Lynch did a dive for Banks that ended up nailing Flair. Crowd cheered loudly for that. Lynch and Banks were on the floor. Charlotte went to the top rope and hit a moonsault on both women that connected perfectly. What a great move! Wow! That’s so impressive. She’s such an incredible athlete that has no problem showing off in a way that nobody else can.

Back in the ring, Charlotte hit a double Natural Selection on both women at the same time. She got nearfalls after that. Charlotte had Banks on her shoulders, so Lynch jumped off the top with a missile dropkick for two. Lynch applied the Disarmer submission on Charlotte. Banks broke it up. Banks applied the Banks Statement submission on Lynch that was broken up by Charlotte, who put the Figure Eight on Banks. Lynch pulled on Sasha’s arms to break it up. All three women were down selling fatigue followed by a spot where they exchanged chops and forearm smashes. Charlotte nailed Banks with a Spear. They battled on the turnbuckle with Lynch hitting a superplex on Charlotte. Banks with the Banks Statement on Lynch. Charlotte tossed Lynch out of the ring. Charlotte put Lynch in Figure Eight submission. Banks tried to break it up, but Ric held onto her to prevent her from interfering. The referee didn’t see that. Even if he did, there’s no disqualification in a triple threat. Lynch tapped out to give Charlotte the win at the 16:01 mark.

Analysis: **** That was an awesome match. Great nearfalls throughout, a lot of awesome submission holds and some big spots as well like Charlotte’s moonsault to the floor. The crowd bought into the nearfalls as well as the submission spots too. Sometimes the crowd doesn’t care when a match is booked this evenly, but in this case they were into it in a major way. I think it’s arguably the best women’s match in the history of WWE’s main roster. There have been better matches in NXT, but for main roster it’s right at the top. I’m a little surprised by the outcome because they did the “Flair helps Charlotte” finish so many times that I figured this would be the night where it doesn’t work and there’s a new champion. Instead, they are keeping the title on Charlotte. I don’t have anything against her because I think she’s a tremendous talent. I just thought it was going to be a night where Banks left with the title. Give them credit for having the best match on the show. No group of women could ever say that at a WrestleMania, so it was a history making night.

Post match, Charlotte posed with the WWE Women’s Title as fireworks went off in the stadium as well as outside of AT&T Stadium.

Here’s an interview with Charlotte after WrestleMania. Part of it is in character, but the first part of it was her legitimately talking about how exciting it was.

Here’s another clip of Charlotte from the day after WrestleMania on the Today Show.

This is a video diary with Sasha Banks.

I loved the entrances of Banks and Charlotte in particular. While I like Lynch a lot, they didn’t do much to make her entrance stand out. Banks had her cousin Snoop Dogg and Raven Felix rapping her way down to the ring. It was really cool to see something like that. As for Charlotte, her entrance really reminded me of her father Ric Flair, who was so happy to be at her side for this match. It was just another reminder of how important entrances are in wrestling. It made at least two of the women stand out a lot.

I really felt like they should have had Sasha Banks win the title. Even though she failed, the crowd support was strong and there was an excuse because of Flair holding her leg as Charlotte was forcing Lynch to tap out.

The moonsault by Charlotte was incredible. I know she did it often, but it drew such a massive reaction from the massive crowd. We were very impressed.

The Charlotte feud with Sasha Banks dominated the rest of 2016 after both women were drafted to the Raw brand in July 2016. When Sasha finally got back in the title picture, they had six Women’s Title changes between July and December, which is ridiculous because it’s far too. Their matches were usually very good, though. Most of their matches were around the four-star level similar to the WrestleMania match as well.

There just weren’t a lot of great women’s matches at WrestleMania. Plenty of good ones sure, but nothing that really came close to the four star level. While I think a match like Mickie James vs. Trish Stratus at WrestleMania 22 was a memorable women’s match as well, it wasn’t at the level of this one in terms of in-ring performance. That Mickie-Trish match was more about the story, which was outstanding. This match with Charlotte-Sasha-Becky was definitely the best women’s match at a WrestleMania at this point.

While I don’t think WrestleMania 32 was a great show, I am glad I was there for this match. These ladies kicked ass in their first WrestleMania match and I truly believe the women had the best match on the show along with the men’s Ladder Match. It’s such a great thing that we can remember this match as something special that was great for women’s wrestling in WWE.

That’s all for me. Check out the full list of my WWE PPV Review archive right here.