This show was taped at the Toyota Arena in Ontario, California during the October 15 episode of Smackdown. It was a one-hour show that aired on Sunday afternoon on Fox affiliates. It aired at different times depending on the city and when NFL games were shown in that region.

The crowd had mini American flags as the American flag was displayed on the video screen. Former WWE ring announcer Lilian Garcia was in the ring and she sang the American national anthem, the Star-Spangled Banner. Lilian did an awesome job as usual. There were some troops on the stage as well. Loud “USA” chants after that.

A video aired featuring members of the US Military talking about their service. They showed clips of past WWE Tribute to the Troops shows.

The Smackdown announce team of Michael Cole and Pat McAfee were on hand to host the show and call the matches.

The WWE Champion Big E was up first. His opponent was Dolph Ziggler with his buddy Robert Roode by his side. 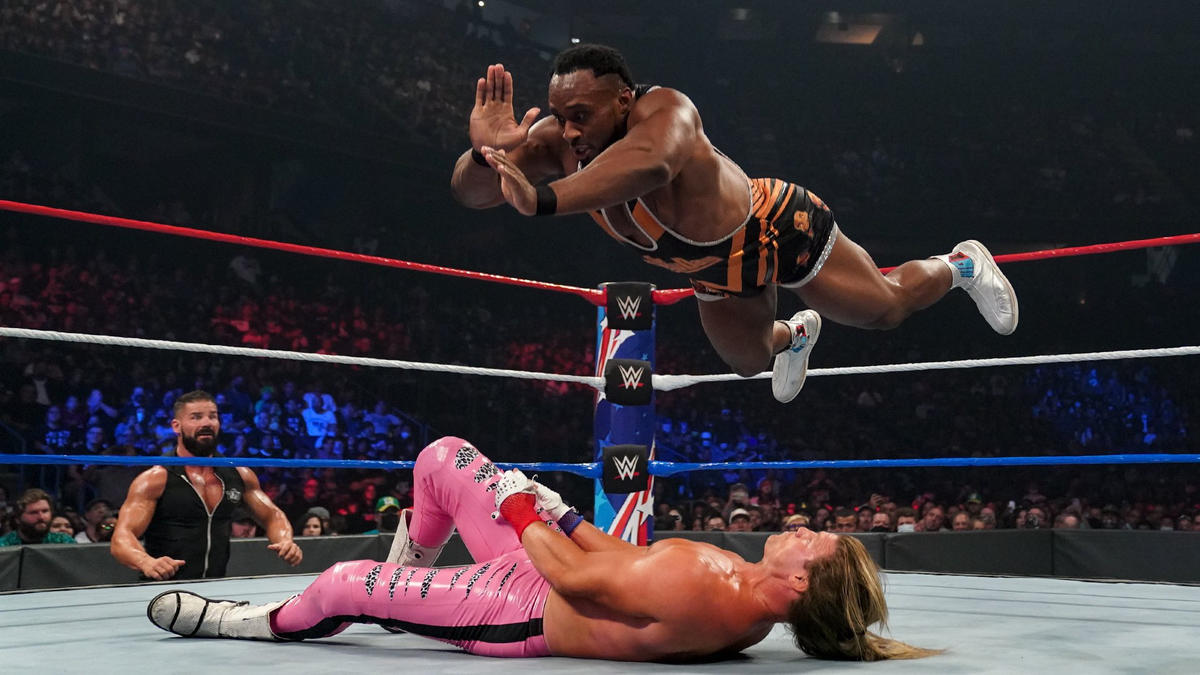 This was not for Big E’s WWE Championship. Big E started with a back body drop. Ziggler ran the ropes, Big E with a leapfrog leading to the abdominal stretch followed by punches to the ribs to the “New Day Rocks” chants. Big E with an elbow smash. Big E set up Ziggler on the apron leading to Big E hitting a splash as Big E does in most of his matches. They went to the apron, Big E went for a move there, Ziggler managed to get back in the ring, Roode held onto Big E’s leg and Ziggler hit a superkick to knock Big E off the apron to the floor.

The match continued in the ring with Ziggler on Big E’s back going for a sleeper. Big E got out of that leading to the Big E comeback routine with the two belly to belly overhead suplexes followed by the belly to belly side slam. Big E hit a running splash. Ziggler to the apron, Big E charged, Ziggler got a knee up and Ziggler hit a Fameasser for a two count. Ziggler with an eye rake, then he hit the Zig Zag and that got a two count. That was Ziggler’s old finisher since he uses a Superkick now. Big E avoided a charging Ziggler, Dolph with a back elbow, Ziggler to the middle rope, he jumped off into Big E’s arms and Big E hit the Big Ending slam for the pinfall win. They showed about five minutes of action, but with the commercial, I’ll call it eight minutes.

Analysis: **1/2 It was good for the time given with Ziggler hitting some of his big moves like the Fameasser and Zig Zag for nearfalls before Big E made the comeback to put him away. I liked the spot with Ziggler leaping off the ropes with Big E catching him right into the Big Ending for the win. They work well together.

Post match, Roode went into the ring and hit Big E with a forearm to the back to knock the WWE Champion down. Roode went for a DDT, Big E slipped out of it and Big E hit a Big Ending on Roode. Big E celebrated with the WWE Championship. Cole said Big E looked ready for Roman Reigns at Survivor Series on Sunday.

Analysis: That was pretty simple. It put over Big E well by showing he could handle both guys.

A video aired about Lance Corporal Nhatalyne Bordes about her dedicated work ethic that has led to her having a lot of success as part of the Marines. She spoke about how she was honored to be a marine.

They showed photos from WWE superstars meeting the troops during various events over the last 19 years.

They showed a video about an air traffic controller Corporal Matheus Stitt. He was born in Brazil, his father was a marine and he chose to be a marine as well. Matheus talked about how it was the best decision he’s ever made. 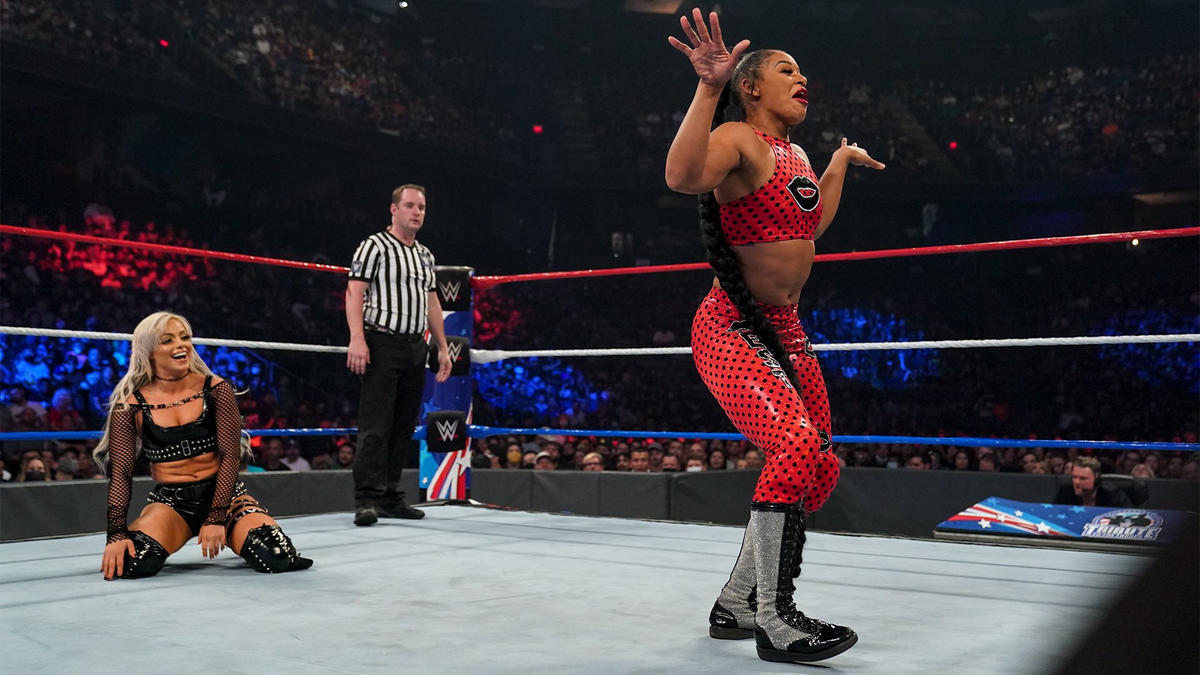 It’s a matchup between two babyfaces with fans chanting “EST” for Belair to start the match. Belair with a side headlock takeover with Morgan turning it into a pin attempt. Morgan got a forward roll into a pin for two. Belair got a pin attempt for two as well. Belair with a shoulder tackle. They showed off their athleticism a bit with Morgan hitting a headscissors followed by Morgan waving at her.

Morgan kicked Belair into the turnbuckle, but then Belair came back with a spinebuster for two. Morgan countered a Belair move leading to a sunset flip for two. Morgan with a jumping enziguri kick with both women down selling after that move. They replayed the kick a few times because it looked great. Morgan with a boot to the face, Morgan went for a move off the middle rope and Belair caught her. Belair sent Morgan into the turnbuckle. Belair had Morgan on her shoulders leading to the KOD (Kiss of Death) slam for the pinfall win. They showed about four minutes of action, but with the commercial, it was seven minutes.

Analysis: **1/4 It was a solid match with Morgan getting that impressive enziguri kick to rock Belair a bit, but it’s not like there was any doubt about who was going to win the match. I liked that spot near the end with Morgan jumping off the ropes, Belair catching her and hitting the KOD for the win. Simple story with Morgan trying a big move, Belair being ready for it and capitalizing to pick up the victory.

After the match, Belair and Morgan shook hands and hugged in the ring. The fans cheered them.

A video aired about a 98-year-old Medal of Honor recipient named Hershel “Woody” Williams. He was in World War 2. Woody said he wore the Medal of Honor in honor of the troops that he went to war with. Woody said he’s often been called a hero, but the real heroes are the ones that didn’t get a chance to come home.

It was time to acknowledge the Head of the Table, The Tribal Chief, the WWE Universal Champion Roman Reigns, who made his entrance with Special Counsel Paul Heyman. McAfee called Roman the “greatest of all time.” Reigns will face WWE Champion Big E at Survivor Series in a non-title match. Roman is in action after a break.

A video aired about a Navy veteran named Matt Lewis, who is recently retired after 20 years. Matt said he loved the fact that he’s a veteran. They showed videos of Matt with his wife and two kids. Matt said he was proud to put on the uniform to support the country and he’s happy with what he did.

Rick Boogs appeared on the stage with the electric guitar letting us know he came to rock with the Intercontinental Champion, Shinsuke Nakamura. That led to Nakamura’s entrance with Cole saying that Reigns asked McAfee if he is with Nakamura or with Reigns. McAfee said “don’t tell Roman” and McAfee was dancing on the table. Reigns and Heyman were looking at Pat’s dancing with a look of disgust. That was funny at least. Cole mentioned that Nakamura faces US Champion Damian Priest at Survivor Series next Sunday. As McAfee danced on the table he said: “I’m sorry Roman. I’m sorry Paul. I can’t help it!” Pat rules.

Analysis: I think that was the first time they mentioned Nakamura vs. Priest at Survivor Series. Most of us assumed it was happening, but it’s not even on WWE’s Survivor Series website as I write this on Monday before Survivor Series. The stuff with Reigns/Heyman staring at McAfee was pretty funny with Pat apologizing while he danced. 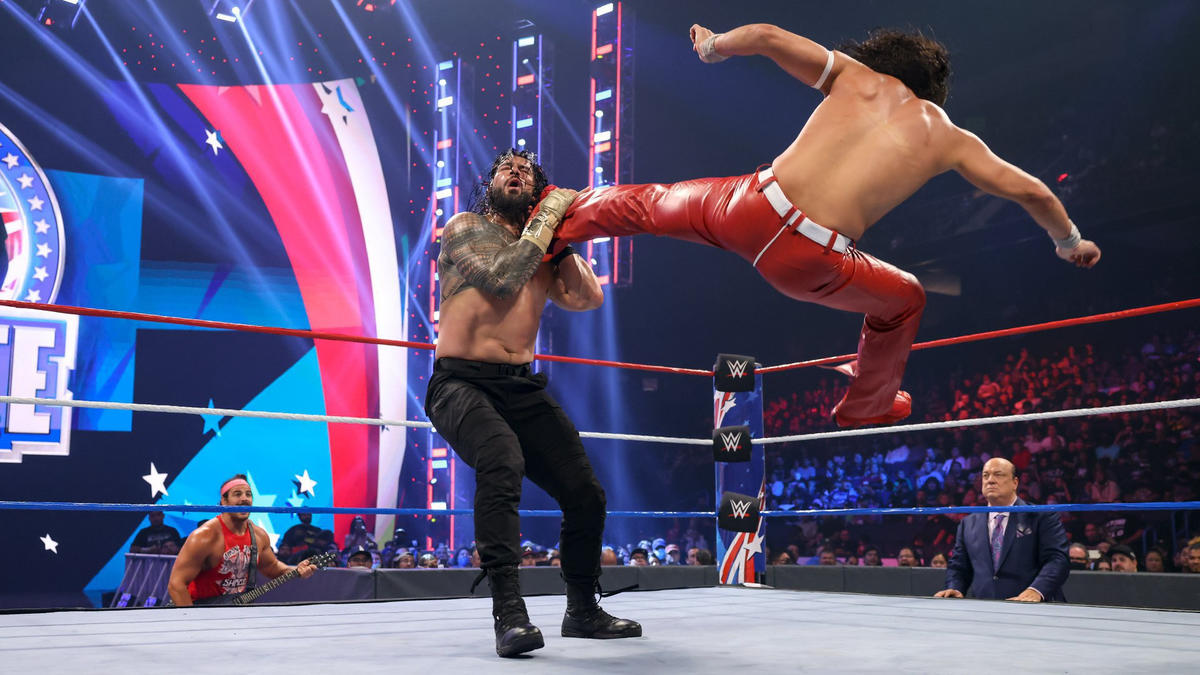 This was not for the Universal Title or the Intercontinental Title obviously. There were “Nakamura” chants to start the match. Reigns with a side headlock, Nakamura broke free with a jumping kick and then a knee drop to the throat. Nakamura put his foot on Roman’s throat against the ropes with Boogs playing the electric guitar at ringside, but then Reigns came back with an uppercut punch. Reigns worked over Nakamura with repeated corner clotheslines followed by a leaping clothesline. Nakamura rolled to the floor leading to a break.

They showed a video about Cadet Holland Pratt. When her grandma grew up in post-World War 2 Germany, her grandma’s father died in a concentration camp. While her grandma was hiding, she was saved by some Americans. When Holland sees how far her grandma has come (they showed a picture of them together), she thinks it’s all because of the sacrifices that those soldiers made. She spoke about how her role as a leader is to help other people achieve their dreams and goals.

There were only a few minutes left in the match with Nakamura going for a sleeper, Reigns fought out of it and Reigns hit a uranage slam for two. Reigns adjusted his glove for a Superman Punch, but then Boogs started to play the guitar, which annoyed Reigns and Heyman wanted Reigns to focus on the match. Nakamura ducked the Superman Punch leading to Nakamura hitting a spin kick. Boogs played the Nakamura song, so then The Usos showed up to attack Boogs with punches. Nakamura left the ring, he kicked an Uso and tossed another Uso into the barricade. Reigns capitalized with a Superman Punch on the floor. Back in the ring, Reigns hit a Spear on Nakamura for the pinfall win after about six minutes was shown of the match, take away the two-minute video and add in the commercials, so it was about nine minutes.

Analysis: *** This was pretty good and a nice preview of what they could do if they ever get a proper feud along with a long match. I have wanted to see these guys in a longer match. This wasn’t that long, but it would be cool if they got the chance. Reigns and Nakamura seem to have pretty good chemistry. It was smart to involve Boogs in the match to have him try to distract Reigns, then The Usos got involved and Nakamura being distracted by that led to Reigns capitalizing with the Superman Punch on the floor. After that, it was all over.

Roman Reigns celebrated in the ring with The Usos and Heyman. All of them held up one finger in the air since they are “The Ones” as we know. As the show wrapped up, Cole thanked the Armed Forces for everything that they do. Reigns continued to celebrate with The Bloodline. That was the end of the show. 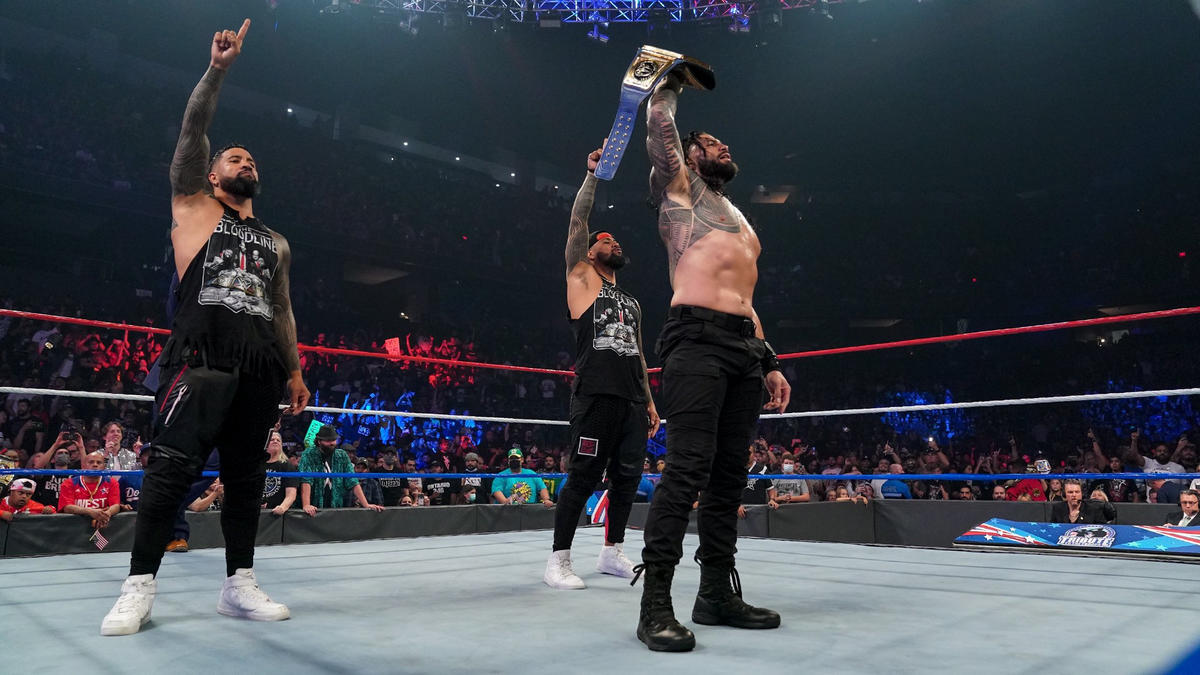 I’m not going to rate it out of ten. I thought the three matches were all pretty good for the time given. I’m a bit surprised that they would end the show with a heel like Roman Reigns instead of having a babyface win to “send the fans home happy” so to speak. A tag team match or something like that could have worked well. It’s not a big deal, though. Reigns is WWE’s biggest star, so putting him on last makes a lot of sense too.

I thought the videos of the members of the military were well produced as usual whenever WWE does stuff like that. The video profiles are all on WWE’s Youtube page as well.

Thanks for reading. Please check out my reviews of every WWE PPV ever listed in order. Go Los Angeles Rams, Toronto Raptors and Toronto Maple Leafs. My contact info is below.