I did not do a Rampage review due to life being very busy last week. I think of the five weekly shows I write about, if I miss Rampage occasionally it’s not a big deal. As I started doing recently, I’m going to go summary style for the Rampage reviews and play-by-play for the main event.

This is AEW Rampage from the Agganis Arena in Boston, Massachusetts. I Check out the AEW PPV listing archive only on TJRWrestling as well. Follow me on Twitter @johnreport.

It’s Friday night and you know what that means. Jim Ross was on commentary with Excalibur and Tony Schiavone. This was taped after Dynamite.

Let’s Hear from Christian Cage (with Luchasaurus) and Jungle Boy

Christian Cage made his entrance with Luchasaurus with Christian having his right arm in a sling. Christian said that “Jungle Boy” Jack Perry has a challenge for them, but Jack only makes his challenges face to face, so Christian called out Jack.

“Jungle Boy” Jack Perry is the official name for him now as Jack went down to the ring with his former friends. Christian said that Jack must be from Boston because he is not very smart and he thinks he is a tough guy. Christian bragged about beating Jack at All Out and Luchasaurus beat Jack in Christian’s hometown of Toronto. Christian mentioned Jack costing Luchasaurus a match.

Christian said that maybe Jack wasn’t as good as he thinks he is, maybe Jack isn’t a pillar in this company and the real pillar is Luchasaurus. Christian said it was obvious that Jack wasn’t going go away, so they will put him down for good. Christian said they accepted the challenge. Christian told Jack to make sure his mom is at ringside and hopefully she realizes that Jack thankfully has his father’s (the late Luke Perry) Hollywood good looks. Jack went after Christian, so Luchasaurus punched Jack to knock him down. Christian placed an open chair in the ring and Luchasaurus gave Jack a Chokeslam onto the chair. The heels celebrated to end it.

Analysis: It was fine as a promo segment leading to the match at Full Gear. This has been a long-term storyline where Jack has lost numerous times, so I think he should beat Luchasaurus in the Steel Cage Match. It makes sense and it would be a way to move on from the feud. Whenever Christian can wrestle again, Jack should beat him too.

The Death Triangle trio was interviewed by Lexy Nair. Pac interrupted Rey Fenix from talking with Pac talking about how they had to be smart. Pac had his beloved hammer in his hand saying they must defend their Trios Tag Team Titles by any means necessary.

Analysis: Pac is obsessed with using the hammer to win as he shows heel tendencies while Rey Fenix and Penta are more like faces. That will probably lead to the group ending when they lose the titles because Pac will blame his partners.

It’s the second segment in a row with a Cage. Martin got some offense to knock Cage out of the ring. When Martin tried a suicide dive, Cage caught him and hit a suplex on the floor. They went to a 90-second picture-in-picture break.

Cage caught Martin with a spinning slam for a two count. Martin got some offense going by countering a power move into a DDT. Martin got a nearfall after a cross body block. They did a spot with Martin hitting a springboard attack on the floor. Martin also did a top rope splash for a two count. After Cage avoided a 450 Splash by Martin off the top, Cage hit a discus lariat and a spinning full nelson slam for two. Cage hit his Weapon X finisher for the pinfall win after 7 minutes.

Analysis: **3/4 This was a solid match for the time given. Cage does some moves that are always going to get a reaction. Cage has lost against bigger names in AEW, but he can beat somebody like Martin, who is not pushed much. Martin is fun to watch, that’s for sure.

Lee Moriarty and Stokely Hathaway were interviewed by Lexy Nair with Lee saying when he faced Jon Moxley, he proved he can hang with anybody. Lee said it was time to get some gold. Stokely mentioned he wanted any champion, Hook walked in with the lowly FTW Title and Lee just stared at him. Hook left.

Analysis: The “covered” FTW Title may be up soon. Thrilling.

A video aired about the House of Black group with Malakai Black, Brody King, Buddy Matthews and Julia Hart. They showed some highlights of them in action while also having a voiceover talking about how they will create misery with every step. It didn’t tell us when they were coming back.

Analysis: They are all good performers, so I’m glad they are coming back soon.

Bandido recently signed an AEW contract, so he is officially part of the roster. Rush hit a dive over the top onto Bandido on the floor. Rush is in such a rush. Yes, I have bad jokes. Rush was beating up Bandido around the ring and then they finally went into the ring with the bell ringing to start the match. Rush was in full control with a kick in the corner followed by a pose leading to a picture-in-picture break.

Bandido was in control with a Frog Splash off the top on Rush for a two count. Rush got some offense going with a discus elbow. Rush jumped off the top with a dropkick that was more like a jumping kick. Bandido showed off some impressive power with a military press slam for two. They each hit multiple suplexes, then barely sold it, then a crucifix bomb and Rush hit a spinning kick leading to them selling on the mat. The crowd was solidly behind Bandido as Rush hit a very safe piledriver for two with JR covering it saying Rush didn’t get all of that piledriver. Jose gave Rush a chair, the referee was distracted by that and Jose tried to rip off Bandido’s mask, so John Silver made his way down to the ring. Silver punched Jose. Rush was distracted so Bandido got the ROLLUP OF DEATH~! on Rush for the pinfall win after ten minutes.

Analysis: *** It was a pretty good match that was competitive the whole way although I didn’t like the finish. Bandido just signed a deal with AEW, so it makes sense that they were going to give him a win here. I just think they could have done a finish that was better than the distraction ending that made Rush look dumb. Why would rush care if Jose was punched on the floor? It was a weak ending, but I did like the action.

They showed a video of Jake Hager going up to Claudio Castagnoli, who was talking to Renee Paquette. Jake said they go way back, then reminded him they were a great team and Jake said Claudio was a great sports entertainer. Jake said he liked his purple hat.

Rose has the TBS Title that she stole from Jade Cargill weeks ago. Rose hit a pump kick that Cargill uses. Rose hit a corner splash and she hit the Jaded slam for the pinfall win after 50 seconds.

Post match, Jade Cargill and The Baddies went into the ring. Rose got rid of The Baddies and then Cargill hit Rose with a pump kick to knock Rose out of the ring. Cargill did not get her TBS Title back. There was security there to keep Cargill back.

Analysis: I don’t think the “steal the title” story is very good, but at least it’s a story that will probably lead to Cargill becoming a face. I don’t know if that’s the best thing for Cargill.

The split-screen main event with Mark Henry aired with Lee Johnson and Orange Cassidy along with their allies standing with them. Orange tried to do Mark’s catchphrase, but then Mark cut him off.

Next Wednesday on Dynamite:

* The Acclaimed Music Video “A Hand For A Hand”

* Toni Storm vs. The Bunny

Screaming Excalibur mentioned some of the Full Gear matches. I have them listed at the bottom of this review.

There’s like 27 guys at ringside for this match. Maybe I lied about the number. AEW has a lot of stables. Orange did an armdrag takedown followed by a shoulder tackle. Lee got a shoulder tackle, then Orange stopped an armdrag attempt by putting his hands in his pocket. Orange did his comedy kicks, then kicked Kole Carter off the apron so Lee hit a dropkick on Orange. Lee sent Orange into the turnbuckle, Orange did a flip bump to land on his feet and Orange sent Lee into the turnbuckle. Lee’s buddies caused distractions so Nick Comorato tossed Orange over the barricade leading to a picture-in-picture break.

Orange gave Lee a back body drop over the top to the floor. Orange hit a dive on some guys on the floor. Back in the ring, Orange hit a diving cross body block, but Lee came back with a Blue Thunder Bomb. Nick grabbed Orange, so Trent Beretta hit Nick with a Spear. There was more fighting on the outside, so Chuck Taylor hit a somersault dive over the top onto some of the heels. Orange got back into it with the jumping DDT. Lee avoided the Orange Punch and got a rollup with the rope pin for two. Lee with a back elbow, a superkick, another kick and Orange countered a move leading to the Beach Break slam for the pinfall win after nine minutes.

Analysis: **1/2 It was okay. Johnson has a lot of talent and a bright future since he’s just 24 years old. Johnson executes moves well, but he’s barely featured on TV (I know he was injured recently). Orange hit one move to put Johnson away after Johnson had some decent offense. I think all the chaos at ringside hurt the match.

Post match, Orange gave Kole Carter an Orange Punch. Trent and Chuck gave Orange a hug because the Best Friends gotta give the people what they want. As Carter staggered back up, Best Friends hugged him. That led to Best Friends hitting a Chokeslam/Powerbomb on Carter. Orange celebrated with his friends to end it.

Analysis: Orange doesn’t have a feud, but he does win his title defenses for the “coveted” All-Atlantic Title.

It was better than some of the bad Rampage shows thanks to the tournament matches that were less predictable than most of the matches that they give us on Rampage. I liked Bandido beating Rush other than the lame finish. The Orange Cassidy match was okay, but they have way too many people at ringside sometimes and it takes away from the matches.

The only women’s match on the show was less than one minute long as the women’s division while furthering the lame Cargill-Rose “steal the title” story. At least the Full Gear card does have three women’s matches.

I did enjoy the Jungle Boy-Christian-Luchasaurus segment to set up Jungle Boy-Luchasaurus at Full Gear in a Steel Cage Match. It’s time for Jungle Boy to get a win in that feud.

The next AEW pay-per-view is Full Gear on Saturday, November 19th. Here’s what we know so far. 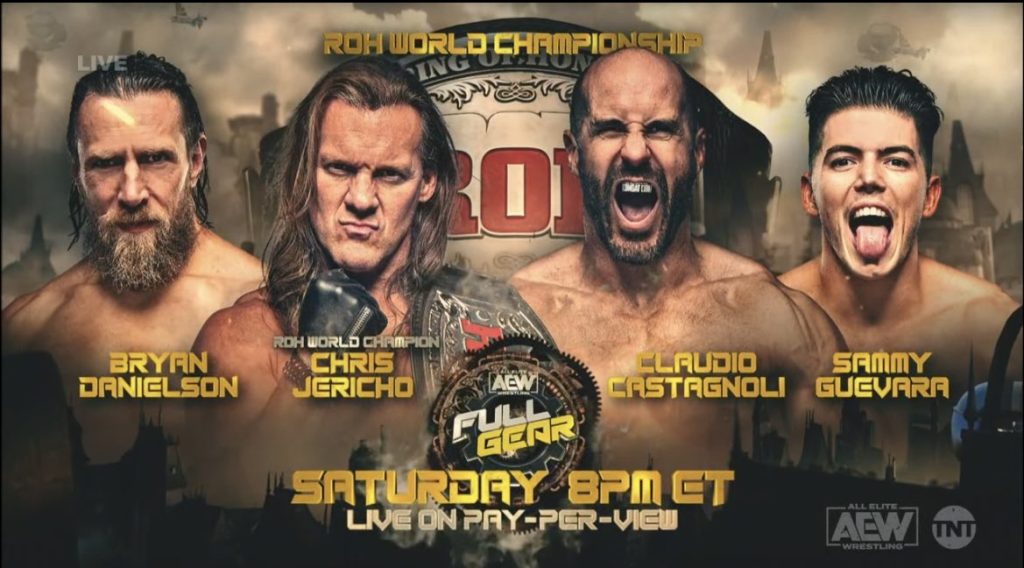