Welcome to TJRWrestling’s review of NJPW Wrestle Kingdom 16, Night One. This review’s coming a bit late since I didn’t stay up to watch the show live.

These will be abridged reviews with me highlighting the key things in each match. I will be rating the matches using the star-rating scale, because mine isn’t broken and if it ain’t broke don’t fix it. If you want more detailed reviews of particular matches, check out my 5-star/Almost 5-star match review series. In those reviews, I go into extensive detail on in-ring action and storytelling.

Ok, now that the cheap plugs are out of the way, let’s get to the reviews.

I don’t expect much from these Ranbo matches because the stakes are so low. Everything was basic and simple here with little in the way of drama outside of a surprise appearance from Tatsumi Fujinami. The only parts that made sense were when Minoru Suzuki came in and destroyed three Young Lions in the span of a minute and when multiple wrestlers helped score pinfalls. There was a bit of excitement when Bad Luck Fale eliminated four men in thirty seconds – including his mentor Yuji Nagata – only to be dropped out of the ring soon after.

Ultimately, I got two of the four winners right in Owens and Yano. CIMA is a nice surprise, I guess, but the big one is Suzuki. He was introduced as ‘the King’ when he confronted Job Moxley in AEW and I guess he’s looking to keep that moniker in 2022. If he gets the chance to dismember Yano like he did in the past, then he just might get his chance.

Before the main card started, we got a little history video which included an appearance from Antonio Inoki himself. That was huge. Inoki hadn’t been seen in New Japan since 2005 after being ousted, and unfortunately he wasn’t looking to great because he’s dealing with an incurable heart disease. And yet he was optimistic and smiling and celebrated the 50th anniversary of him founding the company. Personally I found that really admirable on New Japan’s part. They’re not ashamed of their past history and don’t hide things they don’t like. Some people might not like Inoki, but to ignore him would be insulting to the fans and ignorant of historical fact. It was a nice gesture on their part to include him. 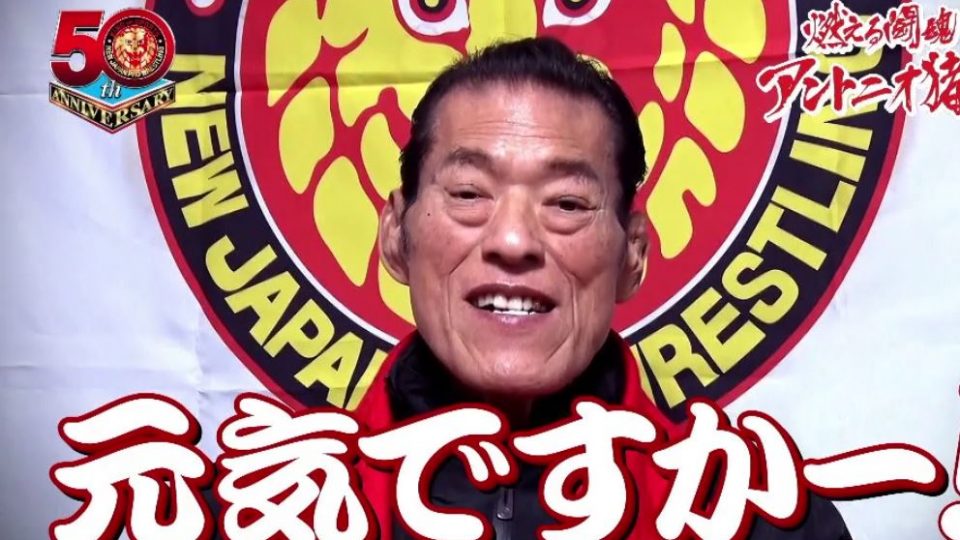 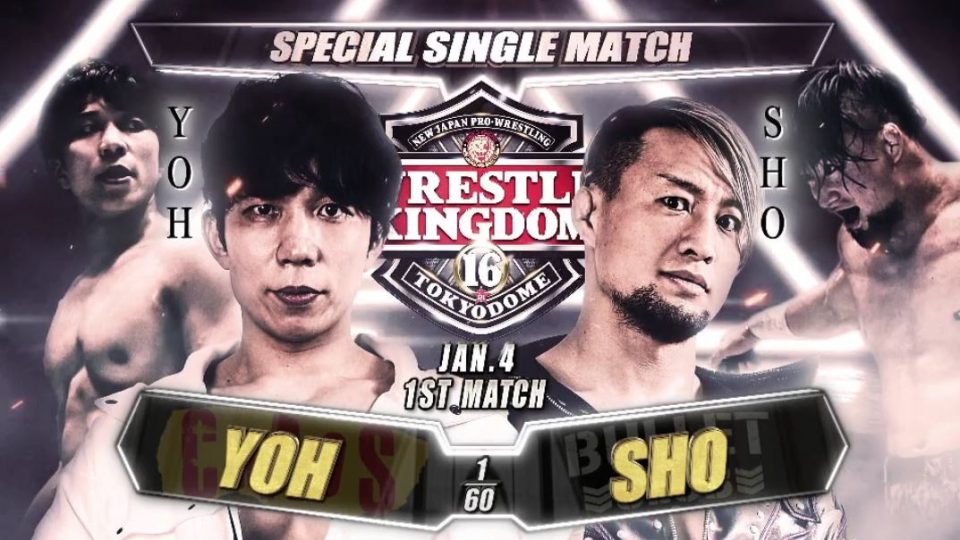 In the first match on the card, there was a suicide dive to the floor and a scoop slam onto the entrance ramp within the first minute. OK then.

SHO was a great heel here. He mocked the cruiserweight style that had made him and YOH famous, he used the referee when necessary, he bullied YOH for the first half of the match. he also looked and acted like a smaller version of Shinsuke Nakamura, which was interesting.

This felt more like an American-style match when SHO’s ally Dick Togo distracted the referee so that he didn’t see SHO tapping to YOH’ submission hold. But when YOH survived SHO’s Gogoplata/Hell’s Gate, Togo came in again to distract the ref for a very long time while SHO went for a wrench. But that plan blew up in his face as YOH pushed an armed SHO into Togo and rolled him up for a surprise finish. From how this was booked, this is definitely not the last time these two will face off in singles competition. 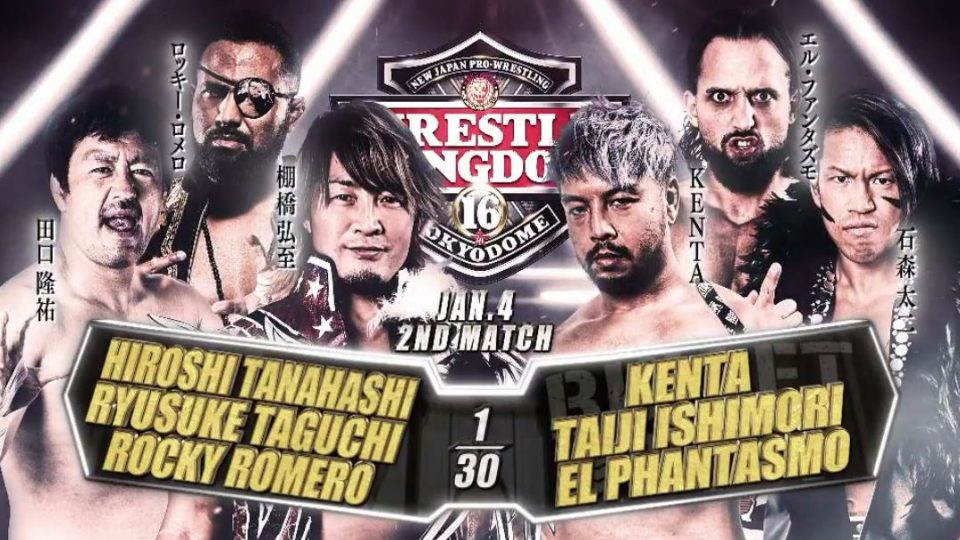 For those that are unaware, Taguchi’s signature move is a butt bump (because, comedy). So leave it to KENTA to ruin his night with a kancho and then turn this into a chaotic Bullet Club-style beatdown.

This match was disappointing up until the finish. It was all over the place with plenty of shenanigans and a complete disregard for logic or flow. I have no idea why standing on a wrestler’s crotch gets a warning but a low blow is an instant DQ, considering both of those things happened here. It was a short match, but nothing really happened for most of it. Only the last minute mattered because it furthered the story between KENTA and Tanahashi. KENTA had been using a kendo stick on Tanahashi in the lead-up to this match and used it again here. But Tanahashi got his hands on it to get revenge, going so far as to keep hitting KENTA with it until he got disqualified. The usually respectful and honorable ace was hellbent on revenge here, so the match didn’t matter to him that much. 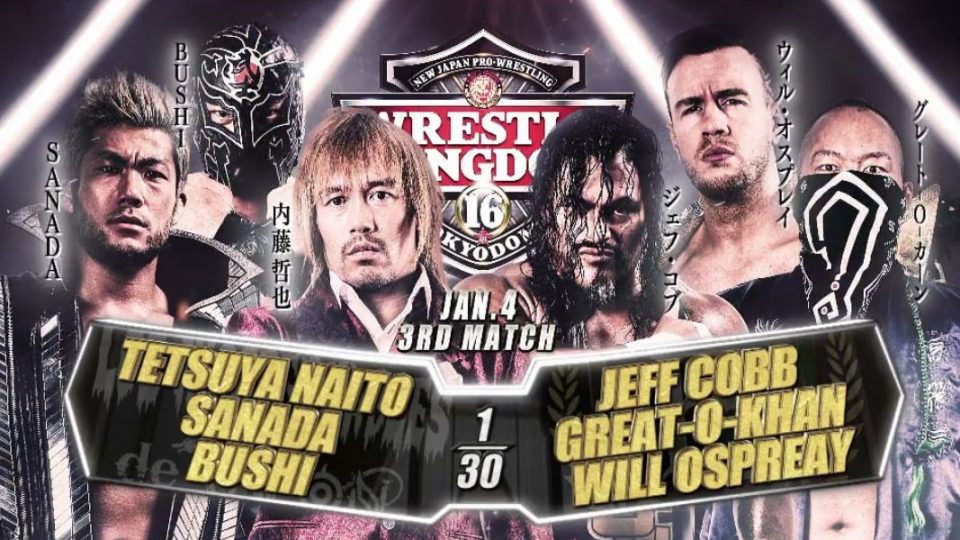 This match was exactly what I predicted it would be. It served as a setup match for the much bigger matches happening on Night Two. Ospreay did next to nothing for most of the match and came in at the end to look dominant and score the fall for his team. Cobb acted as the powerhouse tank that was hard to knock down, which forced Naito to try and cut him down at his knees to get an advantage for their match. And finally, SANADA and O’Khan had some neat little interactions with O’Khan shaking things up a bit to show a bit more variety in what he can do. Solid match, but nothing exceptional by any means. 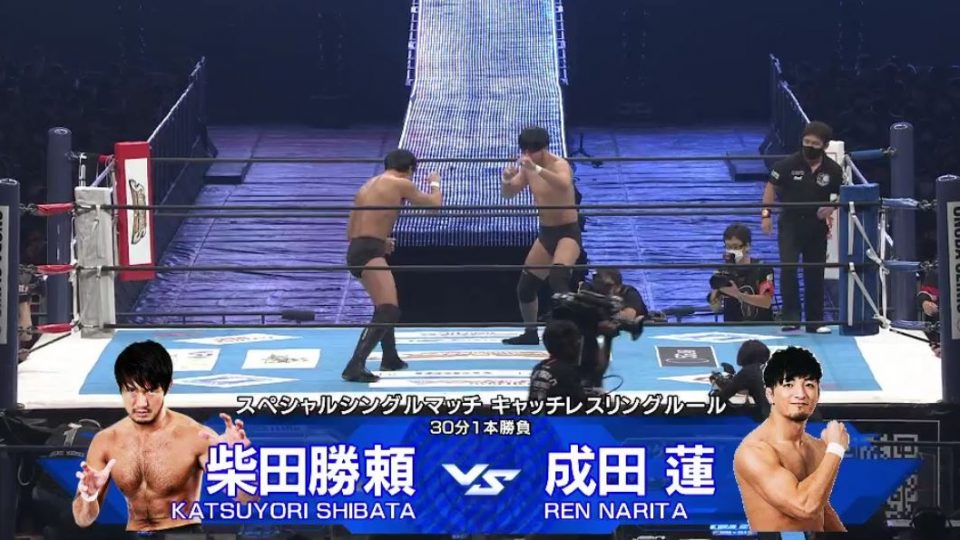 Narita is one of several wrestlers training in New Japan’s LA Dojo under Shibata, so it made sense for him to be a part of his teacher’s big return.

Several rumors circulating right now are suggesting that Shibata ‘went into business for himself’ and did things he wasn’t supposed to do. There was supposed to be no striking in this match, but Shibata went and did that anyway, as did Narita. I guess he wanted everyone to know he was 100% recovered and didn’t want people holding back against him. Well, that sudden change worked because it made this match much better.

Commentators’ awkard covering for Shibata aside, I’m sure people would be screaming with joy at seeing Shibata wrestle like he used to if they could. But since all they could do is clap, they gave Shibata the loudest reaction of the show thus far. Everything he did got an enormous reaction, and he wrestled as if he had never been sidelined. Shibata was smooth in everything he did and Narita brought his A-game against his mentor. He took an absolute thrashing yet he fought Shibata as best he could. At one point they turned this into a kickboxing contest, which was equal parts bravery and equal parts foolishness on Narita’s part. He got his ass handed to him, but still looked great in defeat. If this is what Shibata’s going to be like in 2022, then things are definitely looking up for New Japan. 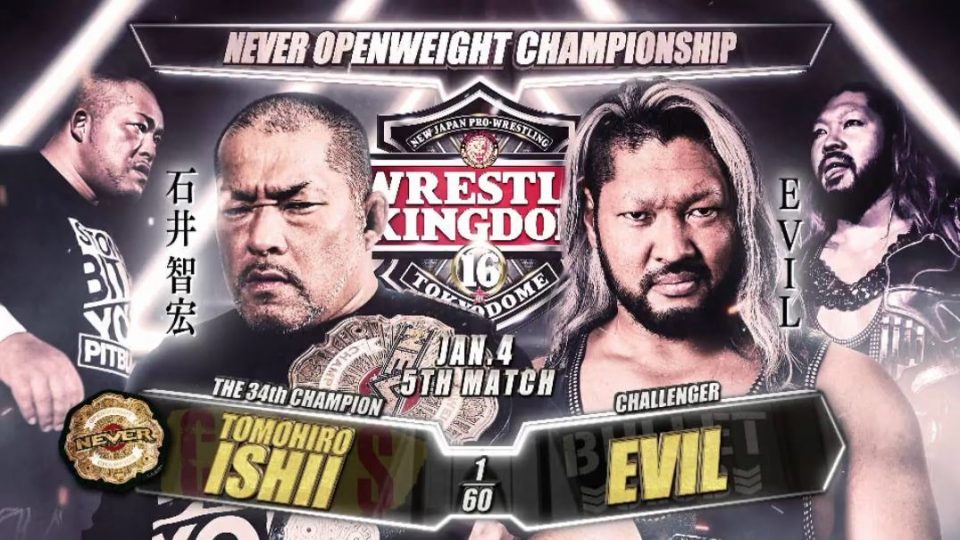 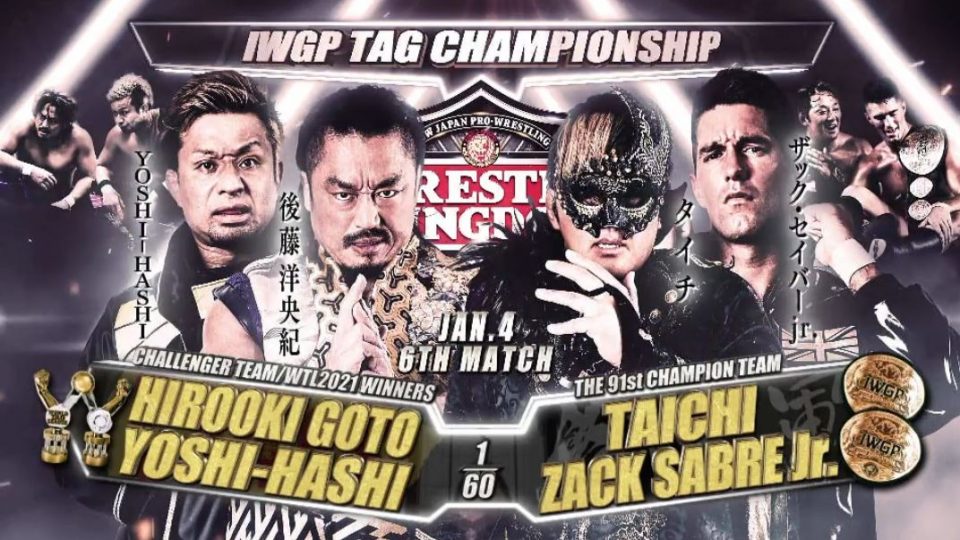 Goto and HASHI won the 2021 Tag League tournament to earn the right to be in this match. And just like in that tournament, they used their newfound tag team chemistry to win the titles.

This match was way better than I thought it would be. This might’ve been the best match in HASHI’s career and was a solid contest from everyone else as well. It was one of those chaotic tag matches that felt more like a tornado tag match since there was a lot of interference from the illegal partners. But that chaos actually made this more exciting. There were tons of counters and last-minute reversals that made this match feel tense. Goto and HASHI fought like hell and worked like a well-oiled machine. ZSJ and Taichi did the same and actually out-fought their challengers until the final minute. ZSJ was awesome as he tied up both his opponents in clever submission holds and Taichi wrestled more like his mentor Kawada and it made him come across as more brutal than before. All in all, this was great for a 15-minute tag match and hopefully it’ll lead to some renewed focus on that division this year. 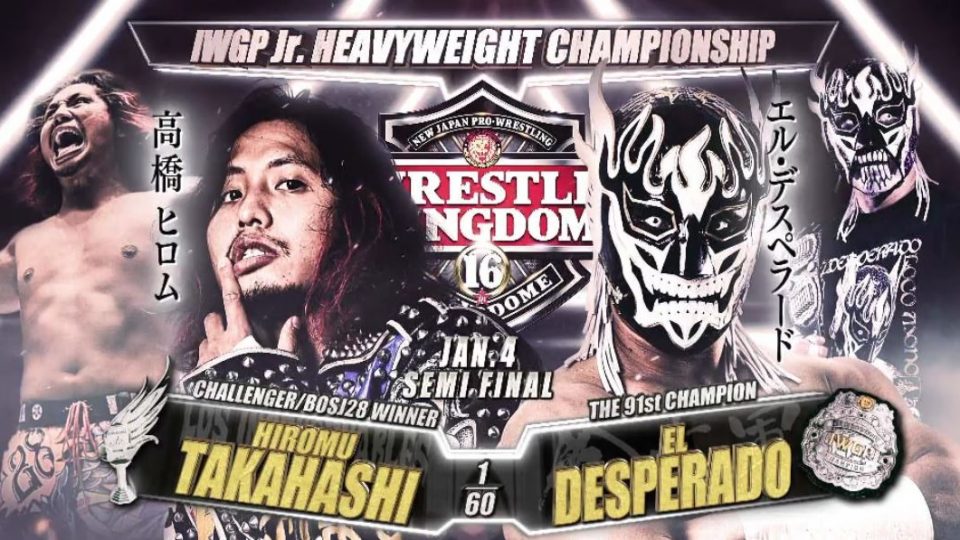 As expected, New Japan did the right thing and booked Despy to win so that the division wouldn’t be completely dependent on Hiromu. That said, I think that Hiromu looked way better than Despy here. the match was a non-stop bomb-fest from bell to bell and moved at a frenetic pace set by Hiromu. He forced Despy to come up to his level and Despy struggled to stay there. Hiromu spammed finisher after finisher, strike after strike, and seemed to run circles around Despy. That forced Despy to use Hiromu’s momentum against him, so he relied on quick counters and sudden pins to make Hiromu second guess himself. Ultimately, Hiromu’s strategy of being as explosive as his Time Bomb nickname was his own undoing. If you like that sort of total nonstop action, you’ll like this match. And yet, cramming so much action into so little time does come across as a bit excessive at the same time as well. 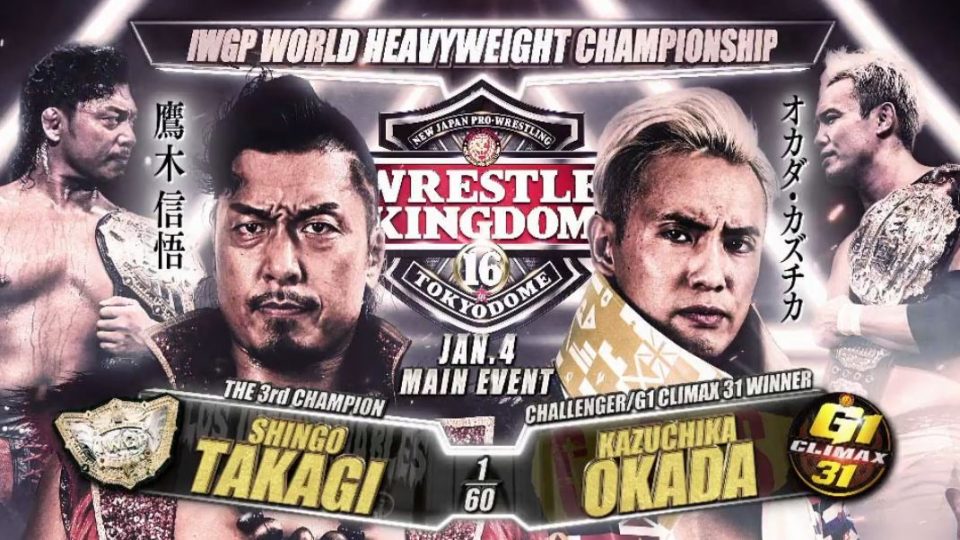 Boy was I wrong.

I thought this would be Takagi’s big moment, his chance to cement himself as someone worthy of carrying the company on his shoulders. But despite his best efforts – and did he ever try – he just wasn’t strong enough to overcome Okada.

Despite wrestling in a very mechanical style, Okada managed to survive almost everything that Takagi threw at him. For 35 minutes they tore into each other in a typical Okada-style main event filled with high-impact head and neck drops and blink-and-you’ll-miss it counters. While Okada and Takagi were repetitive here – if you’ve seen one of their main event matches you’ve seen them all, for the most part – they did add a little something extra when Takagi mocked Okada as openly and as blatantly as he could. Takagi has a way of being arrogant and playing with the crowd in these matches and that bit him in the ass here. He angered Okada and forced Okada to stop holding back, which led to Okada drilling him with his usual arsenal of head-targeting moves plus a surprise Jushin Liger-inspired avalanche DDT. In the end, the status quo was restored and the Rainmaker reclaimed his title. It was a solid display of endurance and conditioning, especially considering that Okada has been wrestling so intensely for a full decade now. But at this point, both Okada’s and Takagi’s lack of imagination is really starting to show.

There wasn’t much that was special about this show. Okada and Takagi wrestled the same ‘long, epic main-event’ that New Japan has put on countless times over the past decade. The junior heavyweight title match was an ok little burst of a match, but nothing exceptional either. The only really interesting things were a much-better-than-expected tag title match and Shibata deciding to make up his own rules for his match. Usually, I like to turn to New Japan to get something other than American-style pro-wrestling, but the undercard was filled with exactly that.

Maybe the wrestlers were saving themselves for the second night, which will have more big singles matches. Hopefully that will be the case so that this event actually featured something truly notable instead of putting on more of the same of what New Japan had put on before.