Every year in late December as Christmas approaches, WWE puts out Happy Holidays videos. Sometimes they feature the WWE Superstars singing songs and other times, like in recent years, they go with an animated. They went with an animated video this year as well.

In this WWE version of Rudolph, Sami Zayn helped Santa because the reindeer had too much egg nog. That led Sami to recruit some of his fellow WWE superstars to help Santa deliver his presents on Christmas.

There was even a funny line from Kevin Owens, who asked Santa if helping out will get him off the naughty list.

Prior to Bray Wyatt’s WWE return at Extreme Rules in October, WWE was using QR codes along with the “white rabbit” clues to tease Wyatt’s return. Fans didn’t know for sure if the QR Codes were related to Wyatt until they saw him at Extreme Rules.

The Happy Holidays video was no different because there was a QR Code near the end of the video. That led to this brief video on WWE’s website. The video showed a white rabbit hopping around until Brock Lesnar drove over it in a tractor. However, the white rabbit was resurrected again and had the “Uncle Howdy” mask on as he hopped away. That led to a “Happy New Year From WWE” graphic featuring some WWE superstars like Lesnar, The Bloodline, Braun Strowman, Cody Rhodes and more. 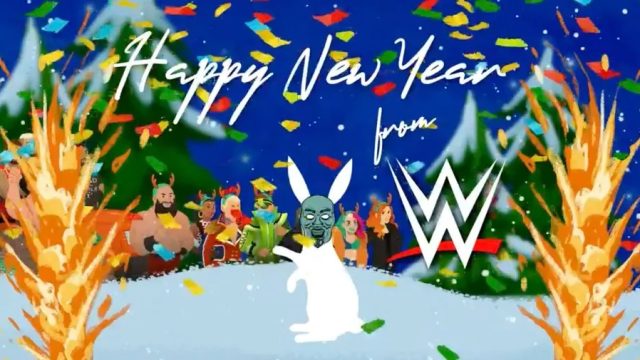 The 2022 WWE Happy Holidays video can be viewed on Youtube here.