The WarGames match will be part of WWE Survivor Series with the company planning to make it a regular feature on the main roster shows moving forward.

On September 19th, WWE announced that WarGames matches would happen at this year’s Survivor Series event in Boston on November 26th. WWE’s Chief Content Officer Triple H made it clear that the match would be based on storylines, rather than Raw vs. Smackdown matches:

“This will not be Raw versus SmackDown. It will be much more story-line driven. I still look at it as a traditional component to Survivor Series in there because it’s large teams of people competing. We just upped the ante a little bit with WarGames and made it evolve.”

The latest edition of the Wrestling Observer by Dave Meltzer (available via subscription) noted that WarGames matches will be a regular presentation on the main roster going forward. Those WarGames matches are expected to be 5-on-5 matches.

Due to that, WWE is looking for some “craziness” during the WarGames matches because it was only an NXT match in the last few years, so now they can feature more of the Raw and Smackdown talent in future videos promoting the match. Plus, some of the NXT talent that were in those matches no longer work for WWE.

There was a promo on the November 7th edition of Raw with Raw Women’s Champion Bianca Belair doing a promo about WarGames. That led to the match announcement with Belair teaming up with Asuka & Alexa Bliss against Damage CTRL’s Bayley, Dakota Kai & IYO SKY. Nikki Cross has joined Bayley’s team as well. That means Belair’s team is looking for two teammates while Bayley’s team has one spot open, so we should find out more information about that match soon.

For anybody that is unfamiliar with WarGames rules, you can see them below. 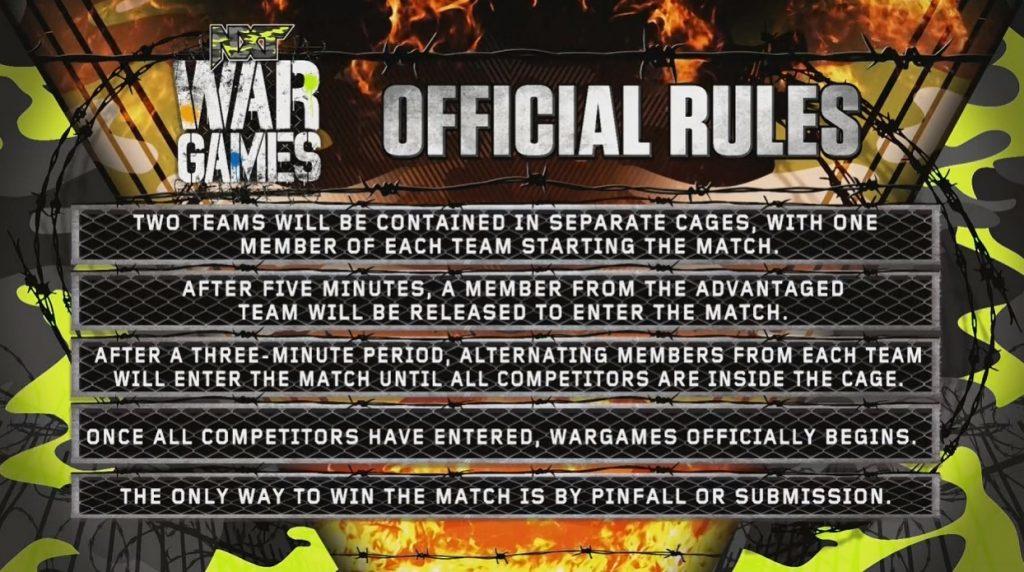 The November 11th episode of Smackdown could have some sort of announcement featuring the Men’s WarGames match especially since The Bloodline group has five male wrestlers in it, so they certainly could be part of the match.