Mick Foley has named a former announced WWE Raw guest host that wasn’t put on television due to issues with people in WWE – it was actor Jonah Hill!

During his acting career, Jonah Hill has had big roles in some major motion pictures like Superbad, Moneyball, 21 Jump Street and plenty more. There was also a time when Hill was supposed to be a guest host on WWE Monday Night Raw, but it never actually happened.

In November 2011, WWE advertised Hill as the guest host of the Raw Supershow on the November 21st episode. It’s still on WWE.com to this day:

“Actor Jonah Hill will be a special guest star on Raw SuperShow next Monday, Nov. 21! The star of The Sitter will be at the first Raw following the aftermath of Survivor Series.

In The Sitter, the world’s worst babysitter takes three of the world’s worst kids on an unforgettable overnight adventure through the streets of New York City, it’s anyone’s guess who’s going to make it home in one piece. It’s a new level of twisted and debauched hilarity from the director of Pineapple Express. The Sitter starring Jonah Hill hits theaters Dec. 9.” 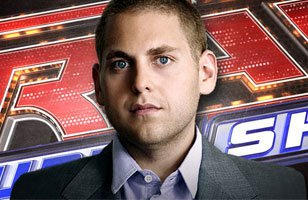 As some WWE fans might remember, Hill never actually appeared on that November 21, 2011 episode of Raw.

Mick Foley provided some insight on a Q&A episode of his Foley is Pod podcast on Adfreeshows. It was revealed by Foley that Hill was difficult to work with when he was supposed to be on Raw, so that’s why Hill didn’t appear on the show.

“He’s not a wrestling fan. There was a reason why Jonah Hill was advertised as the guest GM and it never aired. The guys hated working with him. There were some like Hugh Jackman, The Muppets, they loved it. Almost everyone was a good experience. Jonah Hill was one that didn’t even make the air because he apparently just didn’t want to be there and it showed. I think somebody saw him mouthing to his agent, ‘Get me out of here.’”

Another WWE Hall of Famer, Road Dogg, also talked about Jonah Hill being a crappy interaction.

“I’ll give you an example of a real crappy interaction with a celebrity. Jonah Hill. He came to promote something at Madison Square Garden and they ended up getting hot at him and just said, ‘We’re not doing it. Screw it.’ I think it was Monday Night Raw and Jonah Hill was supposed to be there to promote something. I don’t know if there was a creative difference. I just know a lot of people talked bad about him after it didn’t happen. So yeah, that’s an example of one that didn’t work well and I also don’t even remember the vehicle he was trying to promote, so maybe it wasn’t so great.”