Jeff Hardy was arrested in the state of Florida late Sunday night/early Monday morning on June 13. Hardy, who works for All Elite Wrestling, was charged with multiple offenses.

Hardy was charged with Driving While License Canceled/Suspended/Revoked, Violation of Restrictions Placed on Drivers License, and DUI Alcohol/Drugs Third Offense within 10 Years, according to Volusia County jail records. The arrest occurred in the Daytona Beach, Florida area. Hardy received a surety cash bond of $3,500 – $500 for the license charges, and $2500 for the DUI.

Here is the mugshot from the arrest: 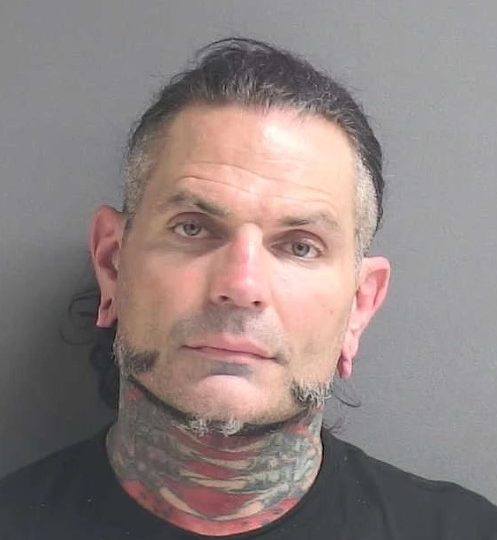 Hardy, who is 44 years old, is set to appear before a judge this Tuesday, June 14th at 1:30 pm. The AEW star is being held at the James Foxman Justice Center in Daytona Beach, Florida.

This is not the first time Jeff has had legal problems or issues with alcohol. Hardy was most recently arrested in October 2019 where he was charged with Driving While Impaired.

Jeff was currently scheduled to wrestle on the June 15th edition of AEW Dynamite, titled Road Rager. On the show, Jeff was supposed to team with his brother Matt against AEW Tag Team Champions Jungle Boy & Luchasaurus as well as The Young Bucks in a 3-Way Ladder Match with the AEW World Tag Team Titles on the line. Most people expect the Hardys to win so they can be AEW Tag Team Champions for the first time. Due to Jeff’s arrest over the weekend, that match is likely not to take place and AEW is no longer advertising it as of late Monday afternoon (4:40pm ET.).

As always, the card is subject to change. AEW could make it a tag team match simply with Jungle Boy & Luchasaurus vs. Young Bucks with just two teams or add a third team to it.

After Jeff Hardy was pulled from a recent episode of AEW Dynamite, his tag team partner/older brother Matt revealed that he “didn’t remember” their match at Double or Nothing against the Young Bucks after he was almost knocked out. Jeff was with brother Matt in Florida for an appearance/signing over the weekend.

Hardy is considered by many to be a wrestling legend with over 25 years as a professional wrestler. Hardy is a multiple-time WWE and TNA/Impact World Champion along with tag team title reigns with brother Matt in many different promotions including WWE, Impact Wrestling and Ring of Honor.

Hardy was released by WWE last December after he refused help and rehab. After his 90-day no-compete clause ended, he signed with AEW to join his brother Matt and reform the Hardys tag team. Jeff is married with two daughters at home.

Please drive safely and if you have had too much to drink, call a taxi or Uber or find some other way to get home. It’s not worth it to drink and drive.

Chris Jericho Explains What Would Make Him Quit Wrestling