The finals of the AEW World Title Eliminator tournament were supposed to be at Full Gear, but they were moved and we have some information about why the change happened.

It was announced during a media conference call with AEW Owner/President Tony Khan that the AEW World Title Eliminator Finals will not be taking place at Saturday’s Full Gear pay-per-view as scheduled. Instead, the finals will be moved to next week’s AEW Dynamite.

The main reason for the delay is that Ricky Starks was not cleared to compete when he was originally supposed to face Lance Archer in a first round match.

In an update on the situation, Dave Meltzer wrote in the Wrestling Observer Newsletter (subscriber only) that Starks was legitimately not medically cleared. It was not a storyline. Starks hasn’t had a match since October 13th due to a medical issue that is not wrestling related, nor considered serious.

The report noted that AEW believed Starks was going to be ready for the original November 9th date of the Archer-Starks first round match. However, Starks wasn’t cleared at that point so AEW shot an angle backstage on Dynamite where Archer attacked Starks backstage and threw him into a garage door.

AEW has announced that the first-round match between Archer and Starks will take place during the November 18th (tonight) live episode of Rampage one day before Full Gear. Meanwhile, Ethan Page has already made it to the finals of the eight-man tournament. 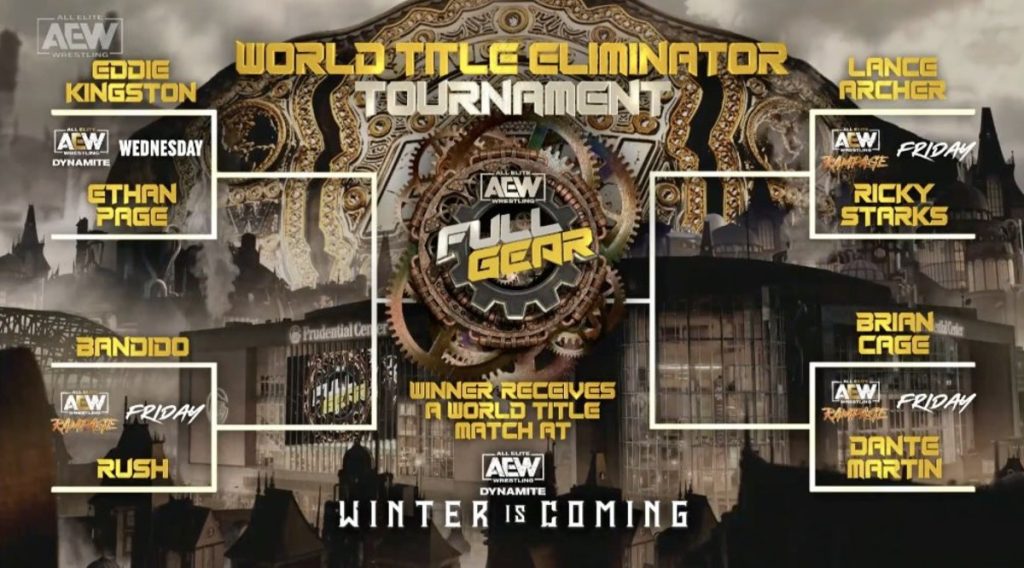 In the quarterfinals, Ethan Page defeated Eddie Kingston, Bandido beat Rush and Brian Cage got the win over Dante Martin. Ethan Page also defeated Bandido on the October 16th episode of Dynamite to move on to the finals where he will face either Brian Cage or the winner of the Archer-Starks match.

The winner of the Archer-Starks match will face Brian Cage in the semifinals during the Zero Hour pre-show ahead of Full Gear on Saturday, November 19th.

All of this means that the AEW World Title Eliminator Tournament Finals will take place next Wednesday, November 23rd on Dynamite in Chicago.

As for the winner of the tournament, they will get an AEW World Title match at the Winter is Coming episode of Dynamite on December 14th.