A surprising former WWE Superstar was seen backstage at AEW Dynamite in Fresno, California two weeks after they were present for Raw.

The 18th of January 2023 edition of Dynamite was tinged with sadness as the stars of AEW paid their own small tributes to the late ROH icon Jay Briscoe. Although reports have since suggested that the company was banned from putting on a full tribute show to the star on TBS.

There was two big title matches on the show with Orange Cassidy successfully defending his All-Atlantic Championship against Jay Lethal while Darby Allin also held onto his TNT Title by picking up the win over NJPW star KUSHIDA.

On a night when two former WWE Superstars showed their true colours with a big heel turn on the show, there was also another former WWE star backstage. Summer Rae (Danielle Moinet) was backstage at the show with Renee Paquette sharing a photo of the women hanging out backstage on social media. 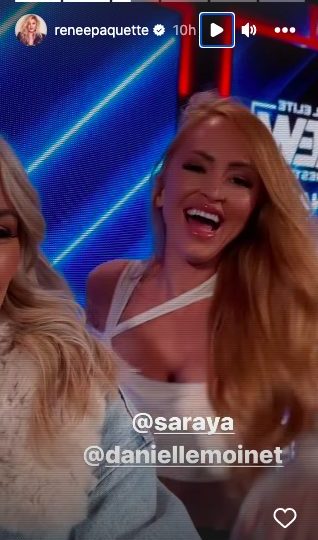 Summer Rae was also backstage at Raw on the 2nd of January when it was held in Nashville, Tennessee, close to where she now lives.

WWE Hall of Famer Brie Bella recently recalled her fall out with the former WWE star after she overheard Rae make some “vulgar” comments to Bella’s husband, Bryan Danielson.