Dynamite takes place at the UBS Arena at Belmont Park in Long Island, New York, which is the home of one of AEW’s biggest stars – Maxwell Jacob Friedman. MJF will be part of a non-wrestling segment as he attends a contract signing with his friend that’s now a rival, the popular big man named Wardlow. During the contract signing, we should learn of stipulations MJF will have as part of their match and when the match will take place. Look for MJF’s friend Shawn Spears to be at his side as well. The match will most likely be at AEW’s Double or Nothing on Sunday, May 29th.

There will be two matches in the Owen Hart Foundation Men’s Tournament Quarterfinals with Darby Allin facing Jeff Hardy. It’s the first time the two high fliers have met on television in AEW, so it’s a “dream match” for some people, especially Allin, who was heavily influenced by the veteran Hardy.

The other men’s Owen hart Foundation Men’s Tournament Quarterfinal match will see Adam Cole face off against one half of FTR, Dax Harwood. Cole is the regular singles wrestler, but Dax has proven he is very good in singles matches like when he beat his best friend and tag team partner Cash Wheeler to earn a spot in the tournament. Cash is supporting Harwood as expected.

The women’s Owen Hart Foundation Tournament Quarterfinals will also take place with Jamie Hayter facing Toni Storm. The two women have exchanged words for several weeks while Storm & Ruby Soho beat Hayter & Britt Baker in a tag team match on Rampage last week, so Storm is going into the match with a lot of momentum. As is usually the case, AEW is only advertising one women’s match on Dynamite this week.

There are three more singles matches on this week’s show:

* CM Punk will face John Silver, who is from Long Island, so Silver should have the crowd behind him. While Punk is popular nearly everywhere he goes, he may not be cheered as loudly in Long Island due to his long-term rivalry with MJF. Silver is also an ally of AEW World Champion “Hangman” Adam Page, who defends the AEW World Title against Punk at Double or Nothing later this month. A victory for Punk seems likely against Silver, who rarely gets televised singles matches.

* Danhausen will make his “very evil” in-ring debut on Dynamite this week as he faces Tony Nese. This has been built up for a few weeks. Danhausen asked his “friend” Hook for some help last week on Rampage, but Hook didn’t seem interested. That may change when the match happens.

Another non-wrestling segment on the show will see the Jericho Appreciation Society, led by “The Wizard” Chris Jericho, giving a victory speech. The five-man group has had issues with Eddie Kingston, Ortiz & Santana over the last few months, so it wouldn’t be a surprise to see that trio make their presence felt during the “speech” that Jericho has planned. 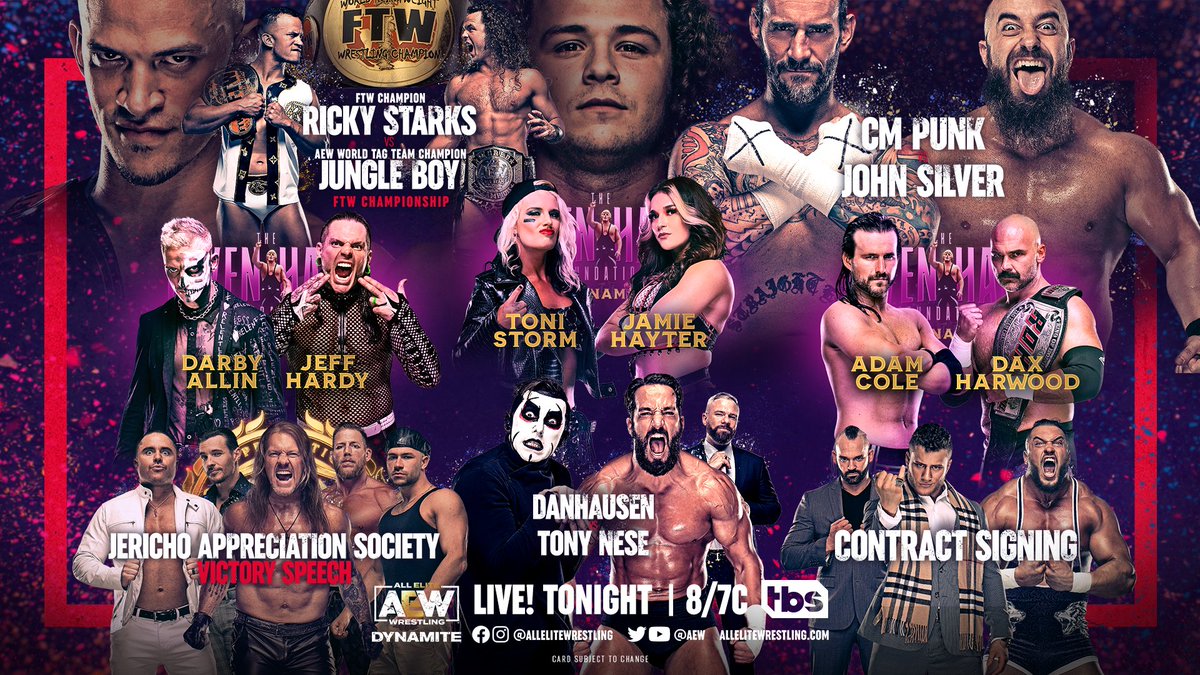 It looks like a good card as usual for AEW, but the strange thing is they are not advertising any tag team matches, which is rare for a company that has such a rich and deep tag team division.

Check back later tonight on TJRWrestling for John Canton’s full AEW Dynamite review as we continue on the road to Double or Nothing later this month.

Tony Khan Delves Into Why He Wears Multiple Hats In AEW