Kevin Sullivan took part in an interview with WrestlingINC that I’m going to provide excerpts from, and then attempt to decipher. Essentially, get ready for some old man rambling drawing parallels between things that make no sense.

First. let’s get into his uncalled for criticism of Kevin Owens wrestling in a T-shirt, which is somehow the reason television ratings aren’t as stellar as they used to be.

Let me ask you something? Kevin Owens, who everybody is jumping up and down over. Can you name a person besides Cactus Jack to get over like that with a shirt on? Name me one. If you ask me who hit 500 home runs, I can name you ten off the top of my head. So why does everybody say these guys have to be pushed? If you’re an athlete, and you’re walking down the street at 2 am, John Cena is walking on the left, Kevin Owens is on the right, which side of the street are you gonna get up on? They need to want to be you, or be afraid to fight you. I think they’ve tried to make a chance, and people listen to the pounding of the drum, but have attendance or ratings gone up? We don’t want to listen to when people tell us what to do. For 14 years the ratings have went down. If that happened in college football, would those people still have a job? Coaches would get cut for not doing their job. Players would get cut.

I had the greatest talent of all-time [when booking WCW]. I’m not the smartest guy in the world. If you book talent and you have hall of famers on the bench, I had that. We had Kevin Nash with us, Scott [Hall] with us, I had all these guys in a box together. You didn’t see our guys running around in t-shirts wrestling. In the UFC do they wear shirts? They’re not. Ali in his day would have drawn $100 million on pay-per-view, and he wasn’t boxing in a shirt. 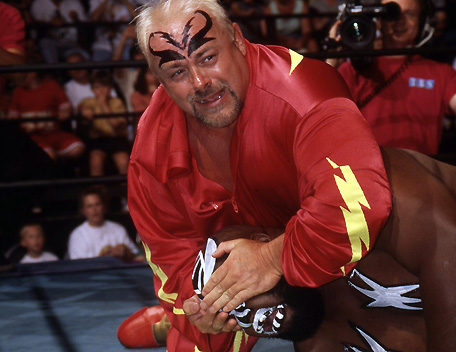 There you have it ladies and gentlemen, wrestling has declined in popularity because Kevin Owens competes in a T-shirt. There is also a portion during the interview where he switches gears on a dime to express how he believes that America needs Donald Trump as president, which is about as random as if I started talking about how Leonardo DiCaprio is overdue for an Oscar.

You’d have to snuff it off. A guy brought up to me that wrestling and boxing was built on legitimacy. We have a bunch of tongue-in-cheek people laughing at us. It wasn’t like that with Bruno Sammartino, but we can’t go back. Boxing keeps on producing fights, and it doesn’t look much different than the 50’s. The wrestling product today doesn’t even look anything like the 90’s or the early 2000’s? There’s a ‘stunt double’ and nobody complains. This is where I’m going to be a nasty old man. This country needs Donald Trump as President. Because we put up with this stuff. If we hate it that bad, why don’t we turn it off and stop watching?

I would also like to thank Brandon Stroud of Uproxx for pointing out that Kevin Sullivan is a hypocrite anyway, and used to wrestle in a T-shirt. So not only is his argument stupid, it’s also inconsistent.

As for Kevin Owens in particular, Sullivan isn’t the first to attempt to bring him down for his size or wrestling in clothes; Jim Cornette also has made an idiot of himself saying that Owens will never make it in WWE. The moral of the story: some old industry veterans have stupidly outdated viewpoints and should receive a Pop-Up Powerbomb from Kevin Owens.

Keep in mind that this is just a sample of the interview with WrestlingINC and that sometime next week we’ll have a whole new batch of ridiculous comments to analyze.

October 3, 2015
Finn Balor posted an image of himself on Twitter doing...