SummerSlam 2022 is in the books and it was quite a start to the post-Vince McMahon era of WWE that is now led by Triple H.

Even though most of the card was Vince’s vision, a lot of the decisions were based on Triple H’s new vision as the head of creative.

Let me start by saying I thought the show was great. Did it have its slow moments? Sure, but I would think it was the best SummerSlam outing in years and probably the second or third best Premium Live Event of 2022. Most of the matches got the time they needed and the booking mostly made sense. (Check out the John Canton review of SummerSlam here in case you haven’t done so already.) Let’s get to it.

This was all I expected it to be. A part of me thought they might run it back and have Bianca win in under 26 seconds to get payback for last year. I’m glad they didn’t because these ladies put on one hell of a show. There were a few rushed spots but for the most part, this was a solid conclusion to a year-long rivalry. As far as story, promos, matches, and big-time feel, I think Bianca and Becky probably had one of the greatest women’s rivalries in WWE history. I’d at least put it top two or three. Their matches never missed. Bianca benefitted from her feud with Sasha Banks leading into WrestleMania 37. However, I think her feud with Becky Lynch solidified her as THE top star of the Women’s division and put her on that next level.

The aftermath is where it gets good. After the match, I thought they did the right thing by having Bianca and Becky shake hands. This rivalry started with a handshake, so it was only right that it ended with one. Turning Becky babyface was the right call for WWE. They made a risky decision by turning her heel in the first place. The fans did not and do not want to boo her but she made it work. Her heel promos were pretty good. Given what happened after the match, it is easy to see why turning her face again was a smart move.

After the handshake, Bianca started celebrating her win. That’s when Bayley’s music hit and the crowd erupted as they should have. Bayley got injured last July while she was in a program with Bianca so having her return to confront Bianca was smart. We all knew Bayley would return shortly but didn’t know which brand she would be on. That wasn’t all as Dakota Kai and Io Shirai (now going by Iyo Sky) also made their returns. Dakota was released back in April after choosing not to re-sign with WWE. Her being here three months later is proof of Triple H already working his magic. Iyo Sky’s contract was coming up but it was reported that a main roster move might entice her to stay. I guess they were right because she appeared alongside Bayley.

What does this mean moving forward? It means Triple H’s vision is already being seen through. One of Triple H’s strengths in NXT was always the Women’s division so when he took over creative, you had to know they would benefit. Vince saw nothing in Dakota Kai. That’s why she was released. He apparently didn’t see anything in Iyo either since he was willing to just let her sit out the remainder of her contract as opposed to simply bringing her up. Both women were used well under Triple H’s NXT. It’s great seeing them get the attention they deserve, especially Dakota. She should’ve never been fired. She’s too good to put on the free agent market. This was a rather slow (and short) match, but Liv Morgan retaining the Smackdown Women’s Championship was absolutely the right call. Ronda Rousey controlled most of the match as she should. Ronda is a trained MMA fighter who basically built the foundation for women to succeed in MMA. There is no logical reason Liv Morgan should be able to go hold for hold with Ronda so from that perspective, I agree with how it was booked. Having Liv roll Ronda up as she was in the armbar and tapping right before the three count protects Ronda.

That finish also gives Liv the win, which is what she needs. After the match, Ronda was upset and rightfully so. She attacked Liv and a referee, putting them both in armbars. That’s a good call. I think Ronda is better as a heel. She sounds more comfortable on the mic as a heel so this was the right booking from a character standpoint. Turning Ronda heel and Becky face on the same show is not a coincidence either. I think that will main event one night of WrestleMania 39 next April.

#3: THE MYSTERIOS DEFEAT THE JUDGMENT DAY THANKS TO EDGE

This was the only result of the evening I didn’t really agree with simply because The Mysterios just won last week on Raw. So why run the match back five days later if The Mysterios are just going to win again? The Judgment Day should’ve won because of a returning Edge. Edge returned during the match, complete with his Brood entrance, to screw The Judgment Day.

I feel like we are getting Edge versus Finn Balor at Clash at the Castle. Sure, we could get Edge vs Damian Priest first or Edge and Rey Mysterio vs. Judgment Day. Maybe even Edge and Beth Phoenix vs. Finn Balor and Rhea Ripley. I just feel like they’re going to do Edge vs. Finn first. I could be wrong. Either way, I’m looking forward to it. Finn Balor’s best booking in WWE came during both of his trips to Triple H’s NXT. I have faith we will now start to see some of that on the main roster which makes me more excited to see him get in the ring with Edge. 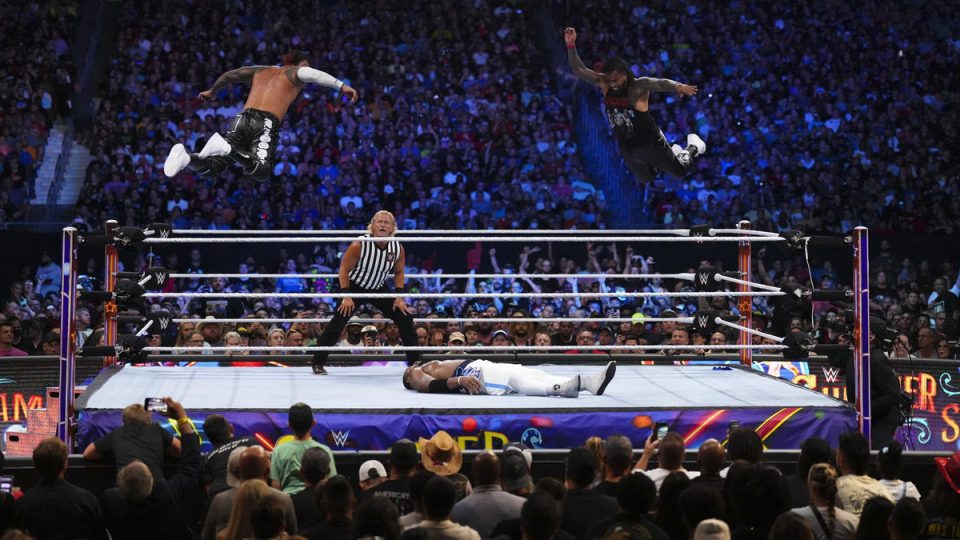 This was not up to the level of their Money in the Bank match, but I still enjoyed the hell out of it. Jeff Jarrett served his purpose as a special referee. There were moments where I thought they might actually take the titles off The Usos here but ultimately, they retained by pinning Angelo Dawkins. After the match, you saw a different look in Montez Ford’s face. It was blank and stoic. It was like he was at a boiling point.

When I pictured The Street Profits splitting up, I always imagined Angelo Dawkins turning on Montez Ford. Ford just has all the charisma to be a top babyface in the company. After seeing the last few months and how his attitude has shifted at times, I’m now a little more receptive to the idea that Ford will be the one turning heel. I still think he is a better babyface option long-term. However, it appears that WWE may have designs to start him off as a heel first. It’s okay I guess. I’ll give it a shot. I definitely think a split is coming fairly soon. 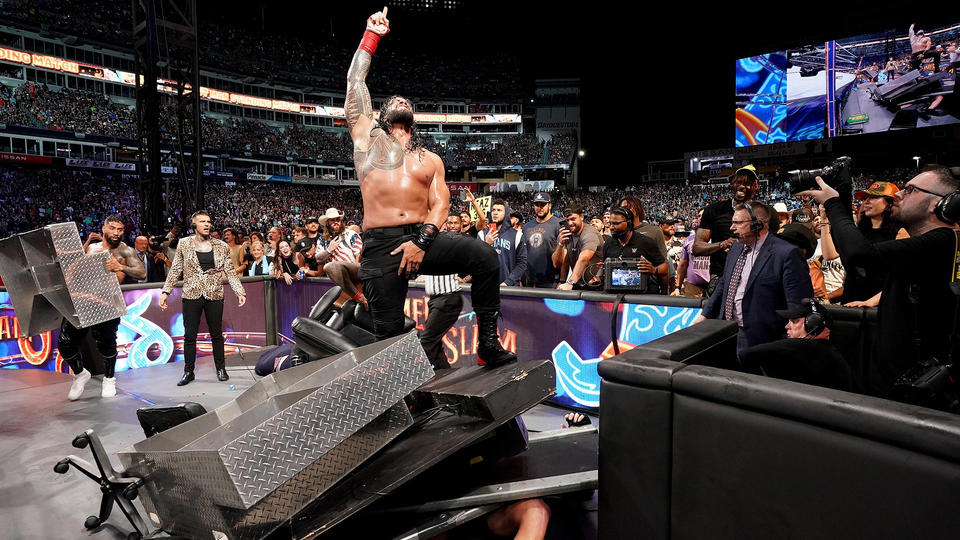 Roman Reigns retained the Undisputed WWE Universal Championship by once again defeating Brock Lesnar in a Last Man Standing match. It was a fitting end to this chapter of their rivalry. It went 23 minutes, which was one of Brock’s longest matches in years, and it was a mess. Brock Lesnar destroyed the ring with a tractor. Theory tried, but never officially cashed in his Money in the Bank contract. Finally, after burying Brock Lesnar under a pile of tables, chairs, steps, and other items, Roman and The Usos forced Brock to stay down for the ten count to retain his title. It was also a lot of fun to watch.

Roman’s next challenger will be Drew McIntyre at Clash at the Castle in the UK. I would not be surprised to see Drew win the title there. It’s his home country. There are going to be close to 70,000 people in attendance. Having Drew end Roman’s two-year reign as World Champion would create a moment similar to when The British Bulldog defeated Bret Hart at SummerSlam in Wembley Stadium to win the Intercontinental Title back in 1992. I wouldn’t mind if Roman retained. Cody Rhodes still needs to win the title soon after he returns. Drew McIntyre winning the title in front of his people after having his WrestleMania moment ripped away by Covid-19, would be a fitting reward for being one of WWE’s strengths during the Pandemic era.

* Logan Paul and Pat McAfee shine again. These two are natural entertainers. They have taken to this wrestling thing better than any celebrity, aside from Bad Bunny, in years. Give credit to The Miz and Baron Corbin. They get a lot of unnecessary hate online, but they worked their asses off to make Paul and McAfee look good. Tremendous work all the way around.

* Bobby Lashley defeats Theory. It was what it was. Bobby is white hot as a babyface right now. Theory is better than what a lot of people give him credit for, but his booking since winning the briefcase has, predictably, not been that good.

* Michael Cole shines. I don’t usually talk about commentary on these reviews. However, I think it’s appropriate to give Michael Cole some credit. He’s always been good but never really given the respect he deserves. Ever since Vince McMahon retired, Michael Cole has sounded a lot more relaxed on commentary without having to worry about getting those buzzwords in every sentence. He’s said things like “wrestling” and “fans” and mentioned names like Jesse Ventura. It’s been great. His calls during the Roman Reigns/Brock Lesnar match are some of the best I’ve ever heard from him. “FOR THE LOVE OF GOD COUNT FASTER!” will always stick with me. It’s time to give Michael Cole his flowers. One of the best to ever do it.

That’s it for this week. SummerSlam 2022 was a success in my book. It closed chapters and started new ones. It was still largely a Vince McMahon card. Tonight’s episode of Monday Night Raw officially starts Triple H’s vision for creative with Clash at the Castle being his first real Premium Live Event with a card largely structured by him and not Vince. I’m excited. Probably more excited than I’ve been in a long time for the future of WWE.