Welcome to the WWE Smackdown Reaction, where I offer my take on this week’s show in Worcester, MA.

We kick things off with Promo Time with RK-Bro? Randy Orton and Riddle show up on Smackdown to address The Usos. The Usos come out to put themselves over. Orton countered that he loved their family and he’s been setting records for 20 plus years before accepting the title unification challenge. The promo from Orton was absolute fire. Best Orton promo I’ve seen in the past few years. If you missed it, you need to check it out. While RK-Bro was posing after the promo, the Usos attacked Riddle before running off. I smell payback later tonight.

Our opening contest has Naomi taking on Rhea Ripley with their respective tag partners at ringside. The match was really good and got a fair amount of time. Both Naomi and Ripley looked really good in this back and forth bout. Ripley would wind up catching Naomi with the Riptide to pick up the win in this 50/50 booking affair. Morgan should eat the pin on Raw so Ripley can turn heel. Yeah, that sounds very WWEish.

Dueling backstage spots to further the Happy Corbin/Madcap Moss feud. At least Drew Gulak got some TV time this week.

Charlotte Flair has Drew Gulak come out to the ring to interview her next. This is probably the most TV time Gulak has gotten all year. Gulak pointed out the obvious spots in the Flair/Rousey WrestleMania 38 match before Flair beat him up and made him quit to the Figure Eight. That’s because the next Flair/Rousey battle is an “I Quit Match.” Poor Drew, he deserved better. I guess it is back to catering for you.

Up next, Drew McIntyre gets another shot a Sami Zayn after last week’s countout decision. McIntyre wanted to beat Zayn up, while Zayn just wanted to run away. Zayn ran away again for yet another countout loss. I wonder if anybody realized that these countout wins really aren’t helping McIntyre at all? Zayn runs into Adam Pearce backstage and gets put into a Lumberjack Match rematch next week. Let’s hope for a decisive finish so both can move on.

Ricochet defends the Intercontinental Championship against Jinder Mahal next. Remember when Mahal was WWE Champion, then became enhancement talent again? Yeah, this match should give Ricochet a credible name to defeat. Ricochet finishes Mahal off quickly to defend his title. Ricochet looked good here. Can we just give him something to do?

Bad acting from the trio of Sheamus, Ridge Holland, and Butch. Butch runs off and I think they were trying to replicate the Home Alone realization spot and failed. Butch attacked The New Day and that should get us a match next week that Butch can win.

We move on to Promo Time with Lacey Evans. Evans continues telling the story of her rough childhood to solidify her as a face going forward. The raw emotion in her promo was great and let’s hope that can translate well in the ring.

Afterwards, Natalya was grumbling about the new girls on the roster to Shayna Baszler. Raquel Rodriguez popped in to say hi. Yes, really.

It’s main event time with Riddle taking on Jimmy Uso. No Roman Reigns in sight for a change. The match was really good with sufficient time given to them. There was a lot of action from start to finish. Orton wiped Jey Uso out causing slight hesitation by Jimmy, who missed the Superfly Splash. Riddle countered into a sweet looking RKO to pick up the win. Orton was so excited that he jumped into the ring as the fall was going to be counted. RK-Bro posed with their titles to close the show out.

Randy Orton’s promo was absolute fire tonight. It goes to show how good he can be on the mic when needed. It set the tone for the whole night.

The show was pretty solid from top to bottom. Everything served a purpose and progressed what needed to be progressed quite well. 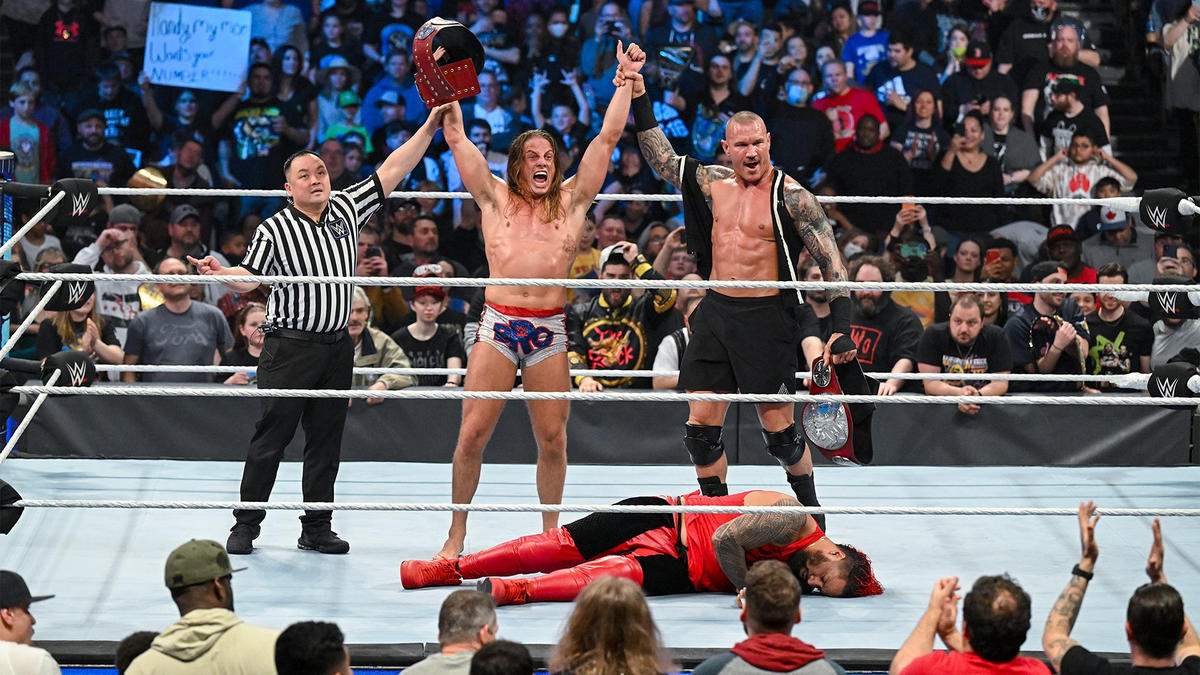 The Sheamus and Ridge Holland “We lost Butch!” segment was not well acted. It felt like it was trying to rip off “Home Alone”.