Welcome back to the WWE Raw Reaction, where I off my take on this week’s show in Winnipeg, Manitoba.

The Raw opening kicks us off followed by an awesome pyro display.

We go straight to the ring for Promo Time with Raw Women’s Champion Bianca Belair and her friends Alexa Bliss and Asuka. Belair talked about her Extreme Rules match with Bayley leading to Damage CTRL coming out. Bayley talks about how everything was handed to Belair who countered that she earned everything she’s gotten. Bayley challenges Belair to a ladder match, which is accepted.

This threw us to our opening bout, Bianca Belair taking on IYO SKY. But, first, we need to show that Sami Zayn and Solo Sikoa have arrived. Um, okay. We did start the match prior to the commercial break. We get a really good match between these two. It was a little one-sided in Belair’s favor, but she is the one with the PLE match. They were given sufficient time to tell the story. I also liked that there was barely any interference, given the four hanging out outside the ring. Great match leaving the focus on those in the ring and not outside.

Rey Mysterio cut a promo backstage about what happened with Dominik last week while looking towards his upcoming match with Seth “Freakin” Rollins tonight.

The Miz is shown backstage with his new security detail the Superfriends of the Canadian Indies, Mizforce. They go off looking for Dexter Lumis.

Seth “Freakin” Rollins comes out for Promo Time ahead of his match with Rey Mysterio. Rollins says he is ready for his Fight Pit match against Riddle at Extreme Rules. Rey Mysterio comes out and dropkicks Rollins out of the ring to get the match going.

The Seth-Rey match was really good as you would expect. They got sufficient time like the previous match to tell their story. About halfway through the match, Dominik shows up with a steel chair and QR Code. Dominik acknowledged Rollins before taking a seat at ringside to watch the match. The pace quickened and the nearfalls kept coming. Rey and Dominik squared off outside to allow Rhea Ripley to jump Rey behind the ref’s back. Rollins gets a stomp before busting out a Peruvian Necktie. There’s something you don’t see every day. Rey was out from the stomp so Rollins gets the “submission” victory. That was the first time I’ve seen the Peruvian Necktie and it looks impressive. Also, a good move for Rollins to show ahead of the Fight Pit match at Extreme Rules with the Rules being knocked out or tapped out. At least it was a better finish than their Eye for an Eye match.

Bobby Lashley and Matt Riddle are backstage reminiscing about their days in the MMA cage. Lashley wishes Riddle good luck in the Fight Pit. Can we please get Lashley a feud?

Are you ready for the Panda Express reunion? One of the Mizforce guys was so excited, he passed out. Alpha Academy comes out first with American flags for heat, since they are in Canada. Johnny Gargano comes out first followed by the Canadian, Kevin Owens. Owens got a great pop. The match was fantastic. They got a decent amount of time and kept it fast-paced. Gable is just on a roll right now and should get a push towards the US Title. He is just fantastic and helped Otis elevate his game. Owens and Otis fought outside and that ended with Otis going through the announce table by Owens. Austin Theory showed up to try to interfere, but that backfired and Gargano picked up the win for his team.

AJ Styles is shown backstage when Finn Balor walked up to try to recruit Styles into The Judgment Day.

Theory was backstage with Alpha Academy when his cell phone rang. It was Braun Strowman looking for Chad Gable. Strowman informs Gable that they are facing off next week on Raw. They are having the match in your (Gable) hometown so they don’t have to fly your body home for your funeral. Great line there. Theory tells Otis he gets Gargano next week.

Apparently, Triple H is still into Omos handicap squash matches. Not sure why though. I’ve had my fill.

Miz is backstage and all of Mizforce is sleeping on the job. Well, back to the indies boys. Lumis is dressed up like the background hockey player and puts Miz to sleep as well. Great segment but can we get some context soon? 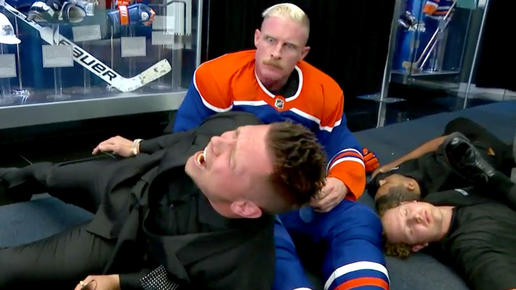 Look who’s back. Mrs. Johnny Gargano, Candice LeRae, comes out to wipe out Nikki A.S.H. in a Three Minute Raw Special. With LeRea back, will we finally get the blow off to her feud with Dakota Kai? Also notable, Nikki took her superhero mask off while being dejected in the corner. Could there be a gimmick change in her future?

Sami Zayn comes out with Solo Sikoa for his match with AJ Styles. This was another fantastic match that was given sufficient time to tell the story. The Sami Zayn/Bloodline story is the best one going in WWE right now. Styles and Zayn work so well together and it showed. Solo stayed out of the match until the very end, helping Zayn pick up the big win. The match progressed the Zayn story and also helped set up the next spot with Judgement Day.

The Judgement Day comes out and Balor told Styles that this wouldn’t have happened had he been with them. Balor offers up their old hand gesture and Styles gives him the finger instead. Judgement Day destroys Styles to close out the spot.

With Judgement Day still in the arena, Matt Riddle comes out for his main event match with Damian Priest. The two friends from NXT put up a great match. Like all of the other big matches, this one was given sufficient time to look like it could go either way. Riddle just wouldn’t give up and the Judgement Day tried to interfere at certain points. Riddle hooked Priest in a counter to pick up the hard-fought win. After the match, the Judgement Day pounced on Riddle for the show closing beat down. Neither Rey Mysterio nor AJ Styles came to the ring to help Riddle.

Since we were in Canada, Edge had to return to do the honors instead. Edge wiped out The Judgement Day and challenged Balor to a first-time ever showdown at Extreme Rules in an I Quit match to close out the show.

All five of the long matches were terrific. It would be hard to pick a favorite. If I really had to, it would be a toss up between Styles/Zayn and Riddle/Priest. It was a good setup and flow between the two matches, but still giving a different feel to each.

The Mizforce stuff was pretty funny. It’s still hard to make Miz the heel in all of this.

I get that it was returning from a commercial break, but did we really need the Sami Zayn/Solo Sikoa arena arrival in the middle of the Belair/SKY match? The bell had rung to start the match prior to the commercial. That just didn’t feel right to me.

I’m done with Omos squash matches. Does he still need to be a thing?